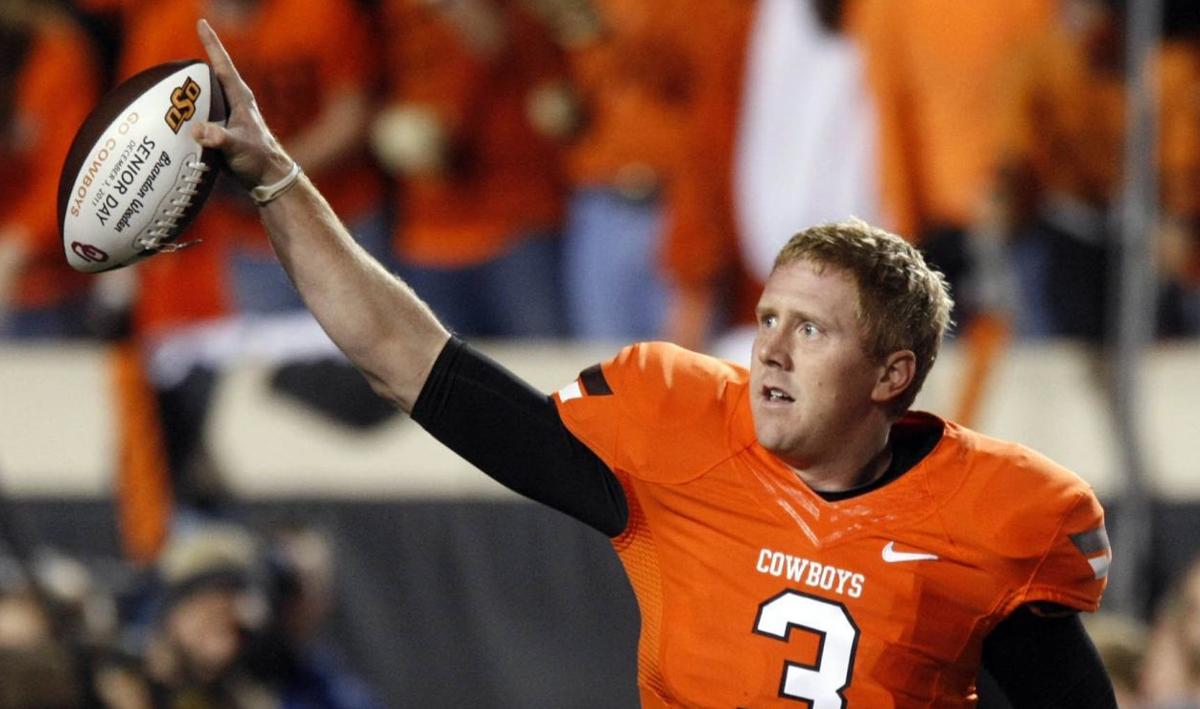 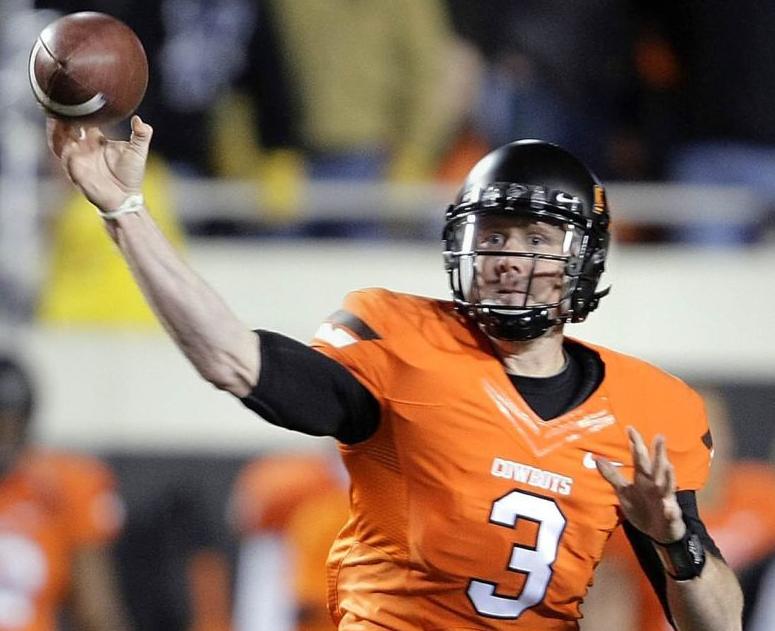 As the starting quarterback for two seasons, Brandon Weeden completed 69.5% of his passes. He remains the most accurate passer in OSU football history. Tulsa World file photo

As the starting quarterback for two seasons, Brandon Weeden completed 69.5% of his passes. He remains the most accurate passer in OSU football history. Tulsa World file photo

STILLWATER — While there still could be an invitation to sign a contract for what would be an eighth NFL season, Brandon Weeden senses he is finished with pro football.

He and wife Melanie were married before Weeden’s historic 2010 season at Oklahoma State. He proposed with a cake that had the words “Will You Marry Me?” spelled out in icing. They now have two sons: 5-year-old tee ball athlete Cooper and 2-year-old Case.

At 35, Weeden’s career football earnings reportedly amount to about $10 million. He doesn’t have an exact expectation on what the next chapter of his life might look like but says he wants to get involved with television-and-radio sports media. Specifically, football media.

“I think he can do what (Tony) Romo does (for CBS),” OSU coach Mike Gundy says. “People want to hear Romo because he tells you what’s going to happen before it happens.

“Weeden can do that. I think he can become a superstar if he ever gets involved in television.”

After having been a 2007 OSU walk-on – after having pitched for five years in the minor-league systems of the New York Yankees, Los Angeles Dodgers and Kansas City Royals – Weeden became a superstar for Gundy.

The most important of the Gundy-coached Cowboys?

That would be Weeden, who combined the maturity of having been an older QB with the best arm talent in OSU history. He was 26 when he became the starter.

“Mason is the more decorated player because (he was a three-year starter),” Gundy said, “but Weeden vaulted himself into being a face of Oklahoma State football.”

In 2010 and 2011, Weeden was 23-3 as the OSU starting quarterback. He shattered all significant single-game and single-season school records for passing yards, touchdown passes and efficiency.

“Vivid memories,” Weeden said during a recent interview at Boone Pickens Stadium. “If I could do it all over again, I’d do it right now.”

Weeden expressed an opinion that the 2011 Cowboys, denied the opportunity to face LSU in the BCS Championship game, were the best team in the country.

“I don’t think there was a defense that could have stopped us,” he said. “It’s a shame we couldn’t find out. LSU had a lot of NFL players, but our 2011 team was special.”

At the end of the greatest season in OSU history, the Cowboys’ consolation prize was the 41-38, overtime conquest of Andrew Luck and the Stanford Cardinal in the Fiesta Bowl. Weeden was 30-of-43 passing for 399 yards. He found Blackmon for three TDs.

In 2009, Weeden was stuck to the bench as a backup. During a Bedlam road loss and a Cotton Bowl setback against Ole Miss, those Cowboys were 2-of-27 on third-down conversions.

The union of Holgorsen, Weeden as the new QB starter and Blackmon as a sophomore wide receiver resulted in an immediate and striking personality change not just for the offense, but for the entire program.

“(Gundy) knew he had to make a change,” Weeden recalls. “The game was changing. My skill set was different. Our pieces were different.”

After about two weeks of the 2010 spring-practice period, a longtime observer of OSU football watched a passing drill and made a bold statement: “Weeden is the best quarterback we’ve ever had.”

At that time, Weeden’s only meaningful snaps had been in the second half of the 2009 Colorado game, as he led the Cowboys to a second-half comeback and victory. He now describes that game as having been “life-changing.”

Thriving in spite of pain

The coaches and program insiders were aware, but in 2010 most OSU fans had no clue that Weeden played the entire season with a damaged tendon in his right thumb.

During a 48-point rout of Washington State in the opener – Weeden’s first football start since the 2001 season at Edmond Santa Fe – he banged his hand against a lineman’s helmet on the finish of a pass attempt.

Surgery was an option, but Weeden would have been sidelined for three or four games. He connected with Blackmon for a touchdown fairly immediately after the thumb was injured, so Weeden believed he could continue to function without surgery.

The thumb is the anchor of a quarterback’s grip on the football, and there was pain all season, but Weeden in 2010 passed for 4,277 yards. He broke the program’s previous single-season record by more than 1,100 yards, and his No. 1 target – Blackmon – totaled 111 catches and won the Biletnikoff Award.

Weeden’s brilliance had a tremendous effect both on Holgorsen (who parlayed his one season at OSU into the head-coaching job at West Virginia) and Blackmon (who in 2011 totaled even more catches – 122 – and got another Biletnikoff while positioning himself to become the fifth player taken in the 2012 NFL draft).

The effect on the Cowboys’passing game

To what extent did the Holgorson-Weeden success shape Gundy’s offensive approach?

During the 2008 and 2009 seasons, with Robinson at quarterback, the Oklahoma State football team totaled 662 pass attempts and 1,137 run plays.

In 3½ seasons as the OSU quarterback, Gundy became the school’s and the Big Eight’s career leader in passing yards. With his two-season total of 9,260, Weeden by nearly 800 yards supplanted Gundy as OSU’s passing-yardage king.

“It’s a pleasure watching Weeden throw the football. The only downside of Weeden right now is his age. I think he’s the same age I am – 48 years old.”

With the 22nd pick overall, Cleveland selected Weeden. Over seven NFL seasons – for the Browns, Dallas, Tennessee and Houston – he made 35 starts.

“If you go into a situation that’s a little cleaner in Cleveland, with a better football team, now you’re talking about getting a second contract and possibly 10 seasons,” Weeden says. “There are a lot of good players in bad situations.

“I enjoyed the NFL, but this is what I’ll miss the most: Sundays, and then every two weeks when your paycheck would be delivered. That was nice.”

Weeden and his family reside in Edmond. He was good enough to have been a walk-on member of the OSU golf team, and he still plays at a high level today.

If his NFL career has ended and there is no more moving from city to city, Weeden plans to rekindle his relationship with OSU.

“This place means a lot to me,” he said. “I want to be involved. I would help with pretty much anything.”

When he quarterbacked the Cowboys, standards were changed.

Subsequent OSU offenses have been measured against the Weeden offenses.

As Gundy’s most important player, Weeden’s impact endures beyond his performances in 2010 and 2011.