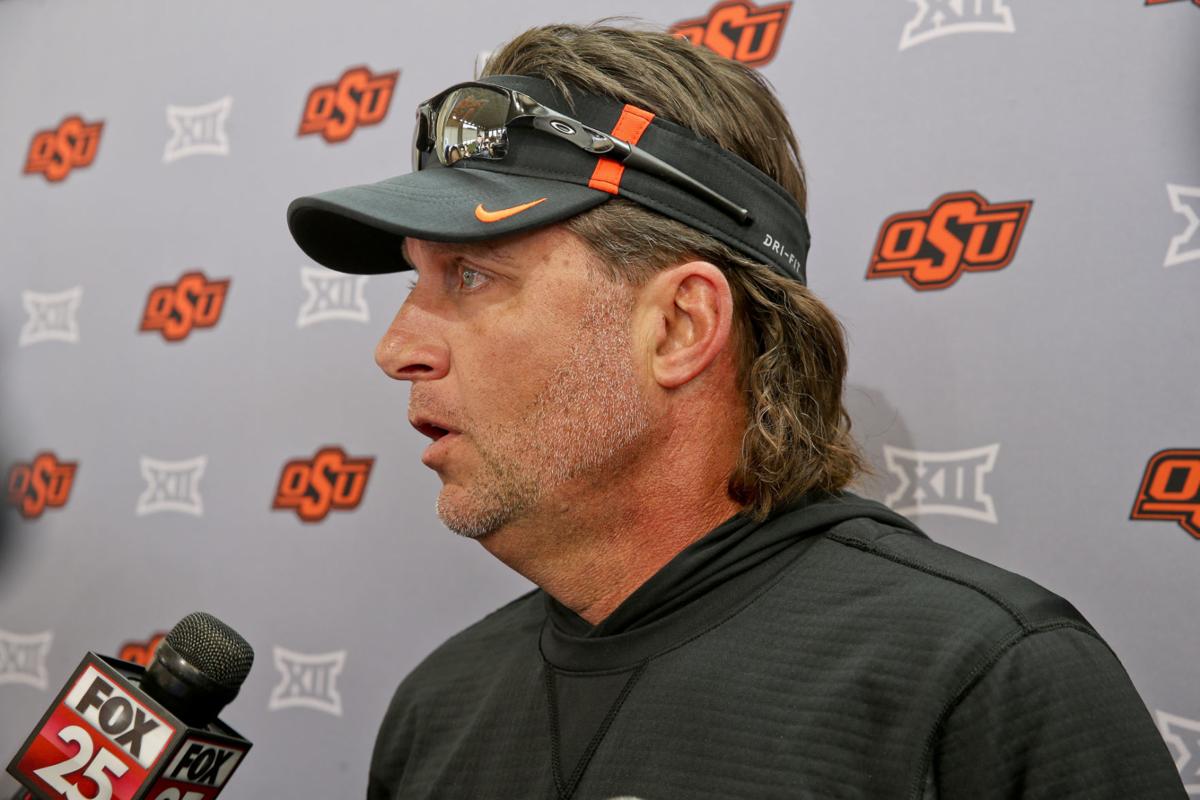 Oklahoma State football coach Mike Gundy said he is “100 percent” behind educators as many across the state have walked out this week. IAN MAULE/Tulsa World 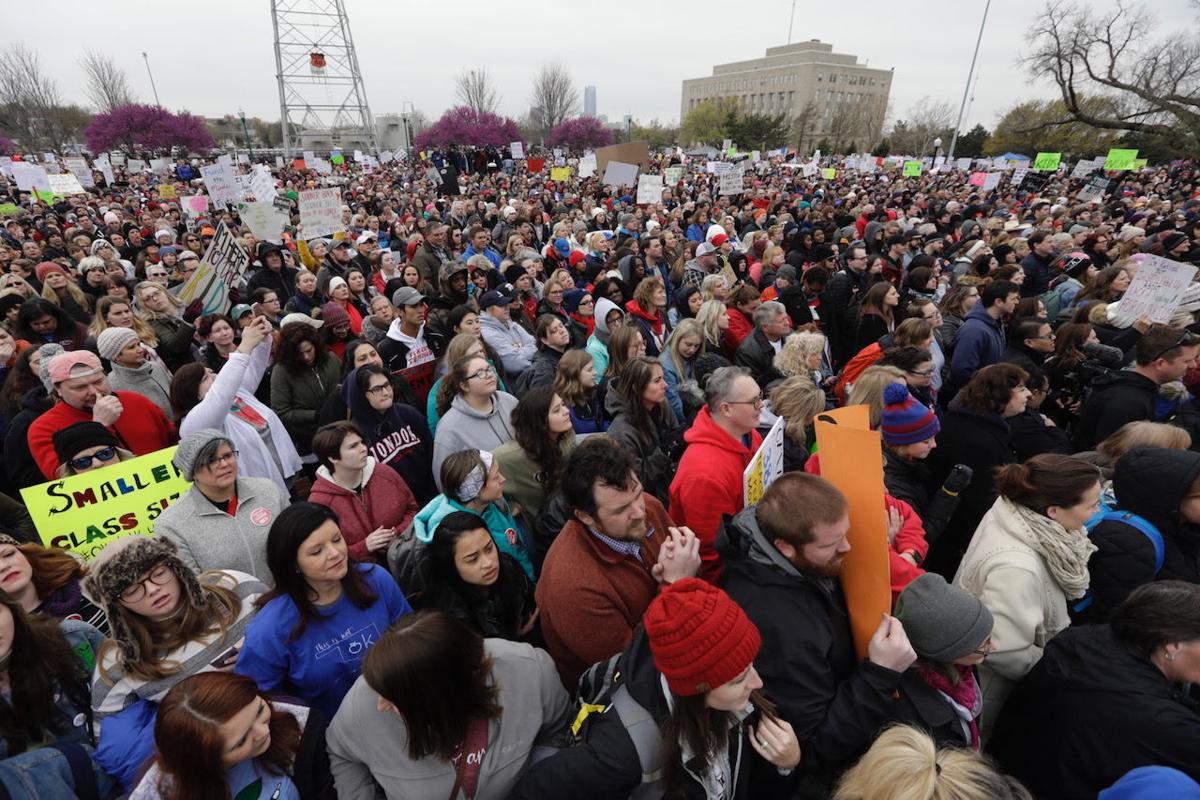 Oklahoma State football coach Mike Gundy said he is “100 percent” behind educators as many across the state have walked out this week. IAN MAULE/Tulsa World

STILLWATER — Mike Gundy had a football team to manage Wednesday, with a new starting quarterback, a new defensive coordinator and a lot of old reliable players now gearing up for the NFL draft.

It is an important time of year for the Oklahoma State coach, and he talked about that as practice hummed along.

It is also an important time in history for Oklahoma, with teachers marching and tensions rising and the sense we are at a tipping point when it comes to the future of our state, assuming we all agree the education of our children is the keystone of any future.

Gundy, a favorite son of Oklahoma and with three sons of his own having been raised at home and in Stillwater Public Schools, talked about that as well.

“I am 100 percent behind our educators,” he said. “I don’t pretend to know all the ins and outs of all of the details involved. I do a lot of reading to stay involved since I am now deeply invested in the situation ...

“I have always felt that the educators in this state are way overworked and way underpaid. Any time that we have people that are directly tied in with our children for six to eight hours a day, we should try to facilitate them and give them the facilities and do everything we can to make sure that they can do their job the best possible. That future relies on us to do our part.

“So I’m 100 percent behind them, and I think they should do whatever is necessary in order to get what’s necessary to be successful so our children can benefit from that.”

Forgive me if I think that’s a lot more important than anything Gundy said about replacing Mason Rudolph, James Washington and Tre Flowers. It’s spring, for one thing.

When coaches hit Dallas for Big 12 Media Days in July, then we can start ramping up depth-chart talk. We’ll have six weeks to do that, until the games begin and we have another four months to break down the football being played in Stillwater, Norman and Tulsa.

Right now? You see what’s happening, don’t you? You see teachers and students carrying signs and hollering chants inside the state Capitol. They would all rather be in school, but right now they are in Oklahoma City or at the corners of busy intersections in Tulsa raising awareness and enlisting your support.

I see them. That’s why it matters to me that I write about them, if through the prism of sports and play. To do otherwise, when the opportunity presents itself, feels negligent.

When presented the opportunity to address his state’s education crisis, Gundy didn’t want to feel negligent, didn’t want to take the “I really have no comment about that. I’m here to talk about football” pass.

A few weeks ago when the education crisis involved the threat of school shootings, Gundy didn’t want to feel negligent. He showed up at a Stillwater school board meeting and offered to help fund security measures in his hometown.

“I have spent more time, more hours on securing Stillwater schools than I have on Oklahoma State football in the last three weeks,” Gundy said Wednesday. “At one point, I thought I don’t know if I necessarily bit off more than I can handle. But I got in deep, and I am thrilled with the meetings that we’ve had with the superintendent, Mark Thomas, and school board members, Stillwater police and their willingness to work with the Payne County Sheriff’s Department.

“For all of us to come together, it makes me proud to be a citizen and in the community of Stillwater.”

Reading that statement and thinking, “Doesn’t he have a team to coach? He really oughta know his place,” cheapens the stakes. Don’t you agree?

It cheapens Gundy’s interest in those stakes as a man who has been in Oklahoma practically his whole life, and as a father of one son who graduated from Stillwater High School, of another who quarterbacks the football team there and a third who is an eighth-grade Pioneer.

“Shut up and coach” need not apply here.

I hope “shut up and write” need not, either.

The sports page is perceived to be a respite from the front page, I understand. You come here to read about fun and games most days.

Just this week I received an email that began: “Under your name it says sports columnist. Why then have you, for two days running, misused your forum for socio-political commentary? It should not matter that you have strong feelings about a non sports issue.”

It was a reasonable, polite letter and I thanked the reader who cared enough to write it. I also asked him to understand there are times it’s valuable to seek all perspectives on issues, particularly when those issues pervade over everything we do, whether it’s write columns, coach football, teach class or hold a public office.

There is too much trouble at hand not to be deeply affected, regardless of our lot in life. I recognize that, and that’s why you see me wade into the deep end now and then.

It’s reassuring to see Gundy recognizes that, and I’m grateful he has allowed me to wade in again.