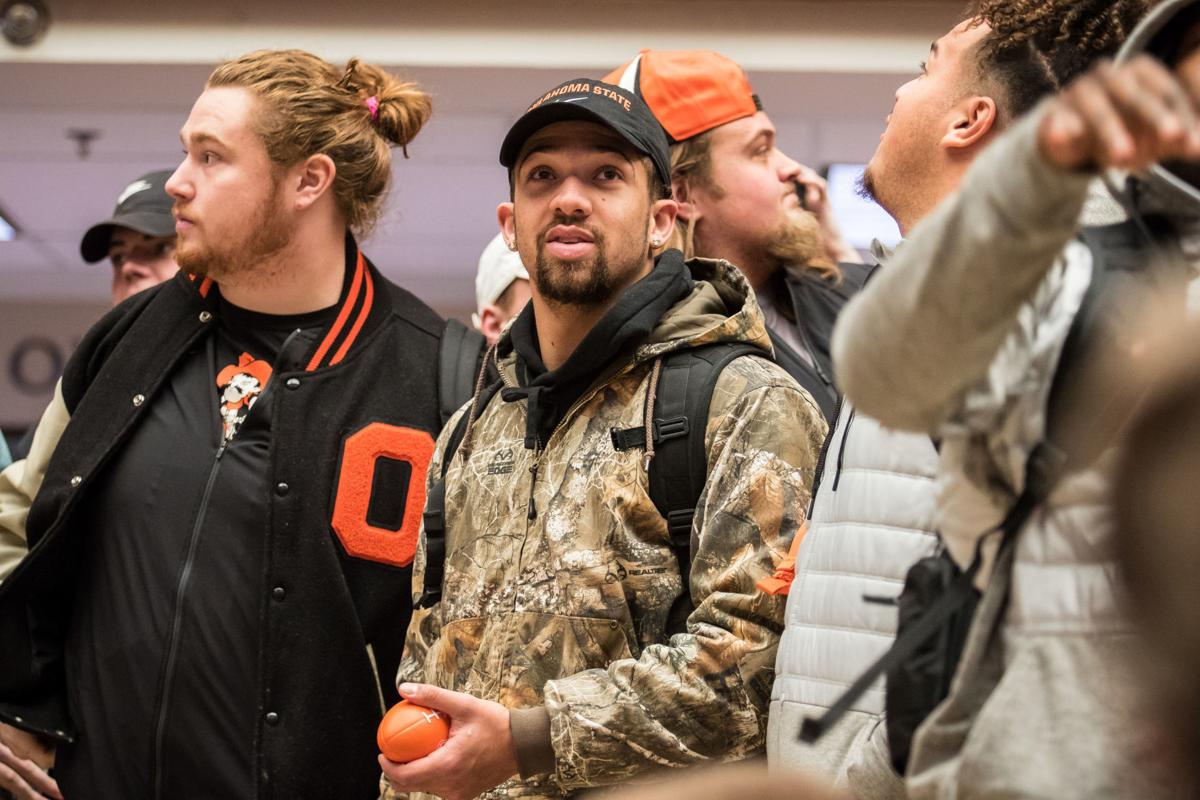 Quarterback Spencer Sanders (center), looking up at fans during Oklahoma State’s football pep rally Jan. 21 at the Student Union, is aiming for a national championship ... or two. “It’s about being self-driven,” he said. DEVIN LAWRENCE WILBER/for the Tulsa World 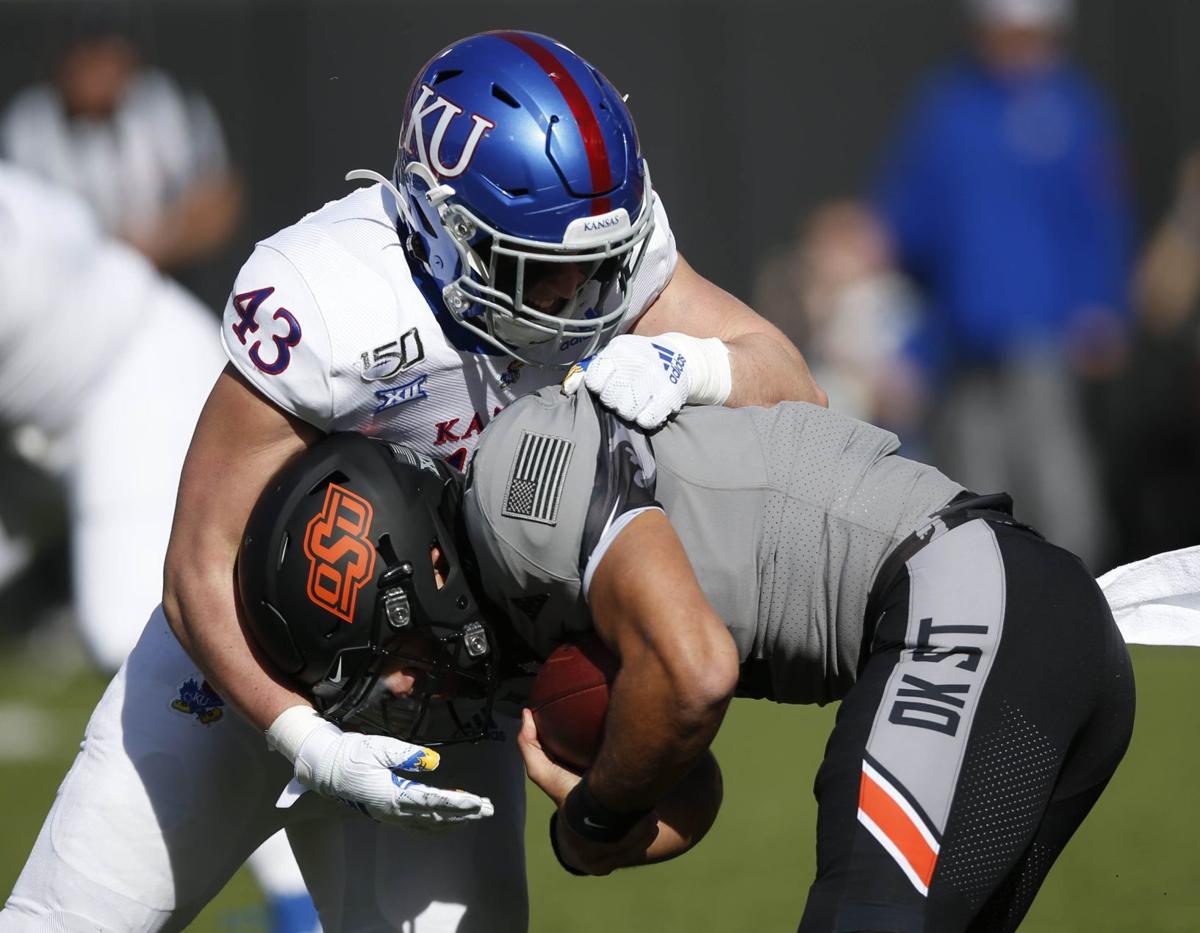 Oklahoma State quarterback Spencer Sanders (right) is brought down by Kansas’ Jay Dineen on Nov. 16. Sanders injured his thumb in that game and eventually had surgery, which derailed his first season as OSU’s starter. MATT BARNARD/Tulsa World file 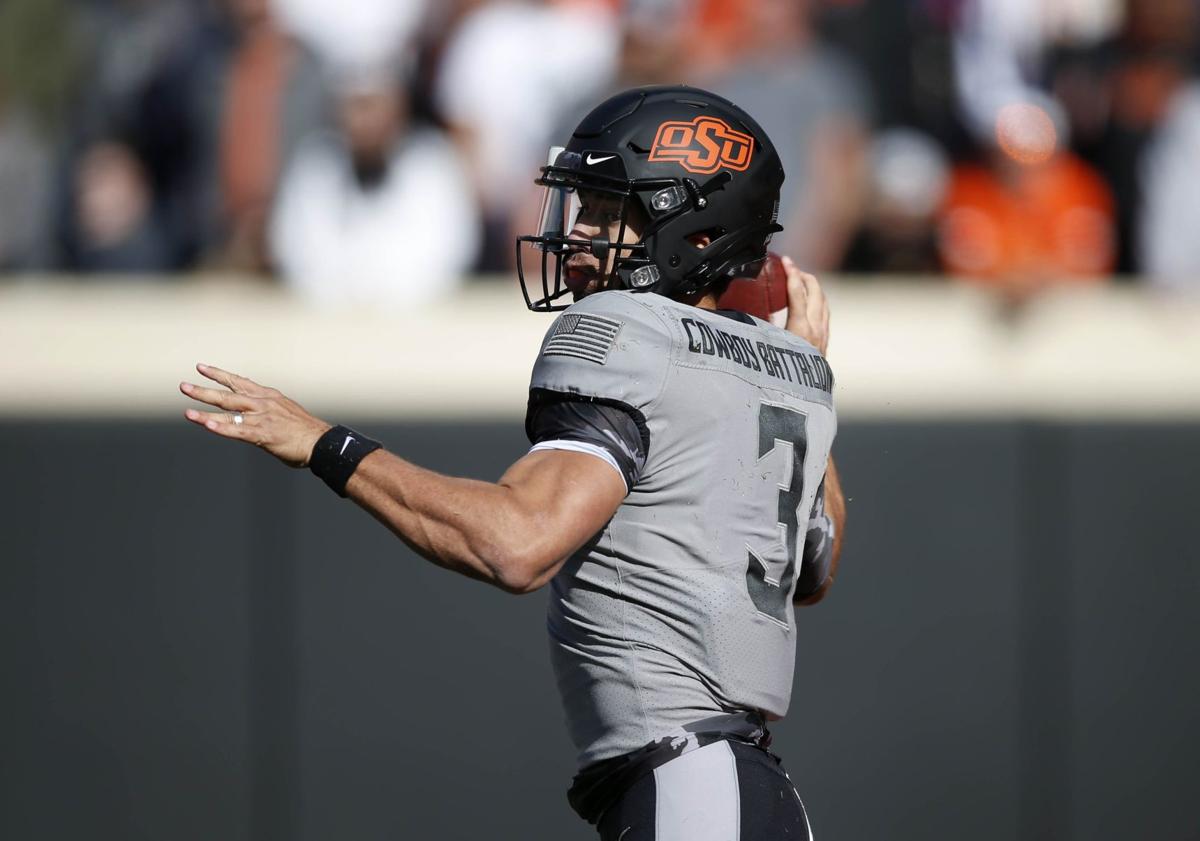 Quarterback Spencer Sanders (center), looking up at fans during Oklahoma State’s football pep rally Jan. 21 at the Student Union, is aiming for a national championship ... or two. “It’s about being self-driven,” he said. DEVIN LAWRENCE WILBER/for the Tulsa World

Oklahoma State quarterback Spencer Sanders (right) is brought down by Kansas’ Jay Dineen on Nov. 16. Sanders injured his thumb in that game and eventually had surgery, which derailed his first season as OSU’s starter. MATT BARNARD/Tulsa World file

STILLWATER — The conviction inside Oklahoma State’s Student Union last week flowed from the atrium, where Chuba Hubbard declared: “We’re bringing a national championship to Stillwater” down a hallway into a corner.

Cowboys quarterback Spencer Sanders spoke there without a microphone. He addressed a small pool of reporters, not a pep rally of fans. He was, just the same, every bit as assured.

“Everybody talks about how you take steps at a time. I don’t really like taking steps,” Sanders said. “Either I’m going big or I’m going home. I’m not going to set myself up short.

“Say we do win the Big 12 and then everybody is like, ‘Aw, we’re done now. We won the Big 12.’ I want to keep going. I want to keep having that thrive. And then after winning the national championship I want to win it again. I’m not gonna stop. It’s about being self-driven.

“It matters how bad you want it.”

It also matters how well you play, if you’re going to speak in such bold terms. It matters at Sanders’ position, particularly.

LSU just won the national championship as Joe Burrow turned quarterbacking into an art form. Clemson won it in 2018 because Trevor Lawrence outplayed Tua Tagovailoa. Alabama won it before Clemson because of Tagovailoa, and Clemson before that because of Deshaun Watson.

Expect Clemson to return to the playoff next season since Lawrence returns. Same for Ohio State and returning Heisman Trophy finalist Justin Fields.

But only if they stay healthy, their defense stiffens and, most important, Sanders rises to where he’s worthy of sharing a stage with the aforementioned quarterbacks.

Recent history makes it clear this is what it takes.

It’s wonderful to be confident, but better to be refined. Sanders must be much more refined in his second year as OSU’s starter, assuming the end game is the playoff.

“Can he get to the level of those guys (Lawrence, Tagovailoa and the like) in one more year? I’m not sure,” Cowboys coach Mike Gundy said after the pep rally. “Can he be a lot better? Yes. He made a lot of improvement prior to him injuring his thumb.”

Sanders has Sean Gleeson, his 2019 position coach who has since joined the Rutgers staff, to credit for some of that.

“He brought Spencer along in understanding fronts,” Gundy said. “We did a lot with the quarterback run, and in order to do that he had to understand fronts. … So he trained him really well to where he can make the right decision on what to do with the ball in the running game. And then he was in the development process throwing the ball.”

Sanders’ late-season thumb injury hampered that development. So did Wallace’s season-ending knee injury. But even before those physical breakdowns, Sanders made too many mistakes in the pocket.

Chalk that up to a young quarterback’s learning curve and, apparently, his athletic gifts.

“His ability to rush the ball and make plays on his own, I think, at times hurt him because it kept him from progressing through his routes like he should,” Gundy said. “He’s always been able to take off and make plays.

“We’re going to work extremely hard in the offseason to influence him to progress and stay in the pocket more, and then let his feet make a play if he has to at the last second. I think that will give him a better chance.”

Tim Rattay, Gundy’s pick to succeed Gleeson as quarterback coach, must pick it up from there. So must Kasey Dunn, the receivers coach elevated to offensive coordinator.

Sanders strives to be better every day, he said. “I’ve been watching film about four times a week, at least eight hours a week.”

Wallace reports he has been throwing.

“We come up here on Saturdays. All the receivers come up with the quarterbacks,” Wallace said. “We’ll go on the field and throw routes. Or we’ll just talk football. We started to create that bond.”

“Definitely. Oh, yeah,” Wallace said. “The guy, you saw the plays he made last year.”

We all saw Sanders’ talent and potential, especially in September.

Now it’s a matter of extending those highlights through a season and deep into December. That way, the Cowboys can go along for a ride well beyond the 2019 Texas Bowl.

“Hopefully everybody’s setting it short at a Big 12 championship,” Sanders said. “I want to go all the way personally.”

That’s good, because he’ll have the most do with delivering on that goal.