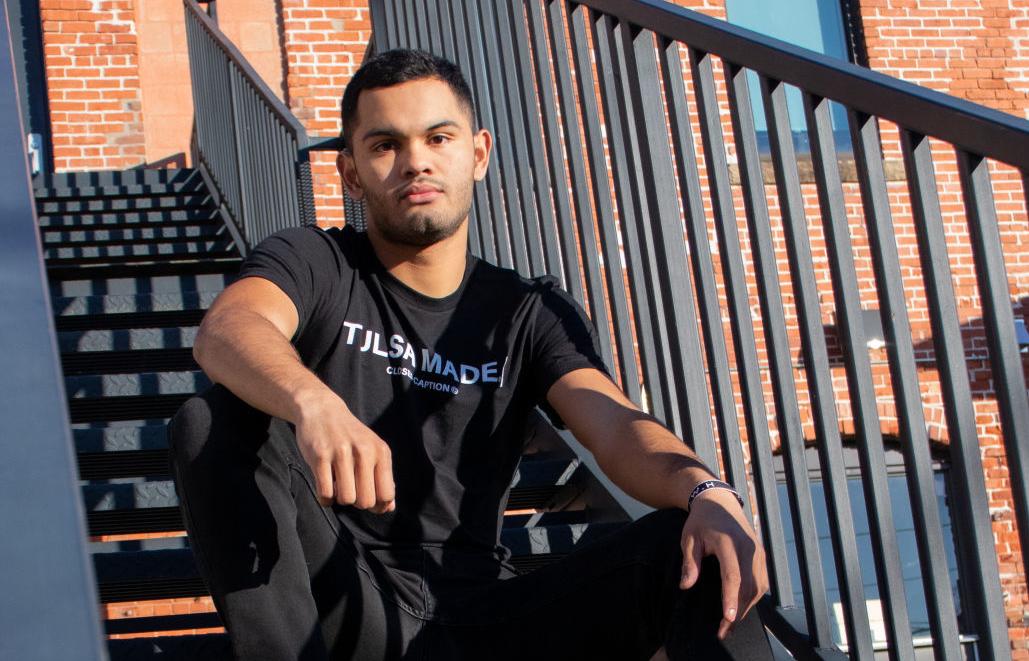 Anthony Diaz had to quit football at OSU because of a heart problem. Now with the backing of former OSU basketball player Chianti Roberts, Diaz is starting a company that sells “Tulsa Made” T-shirts. “I want it to be a shirt that everyone can have from Tulsa and be proud of who they are, whether they’re an athlete or not,” he said. MATHEW ROBBINS/Courtesy 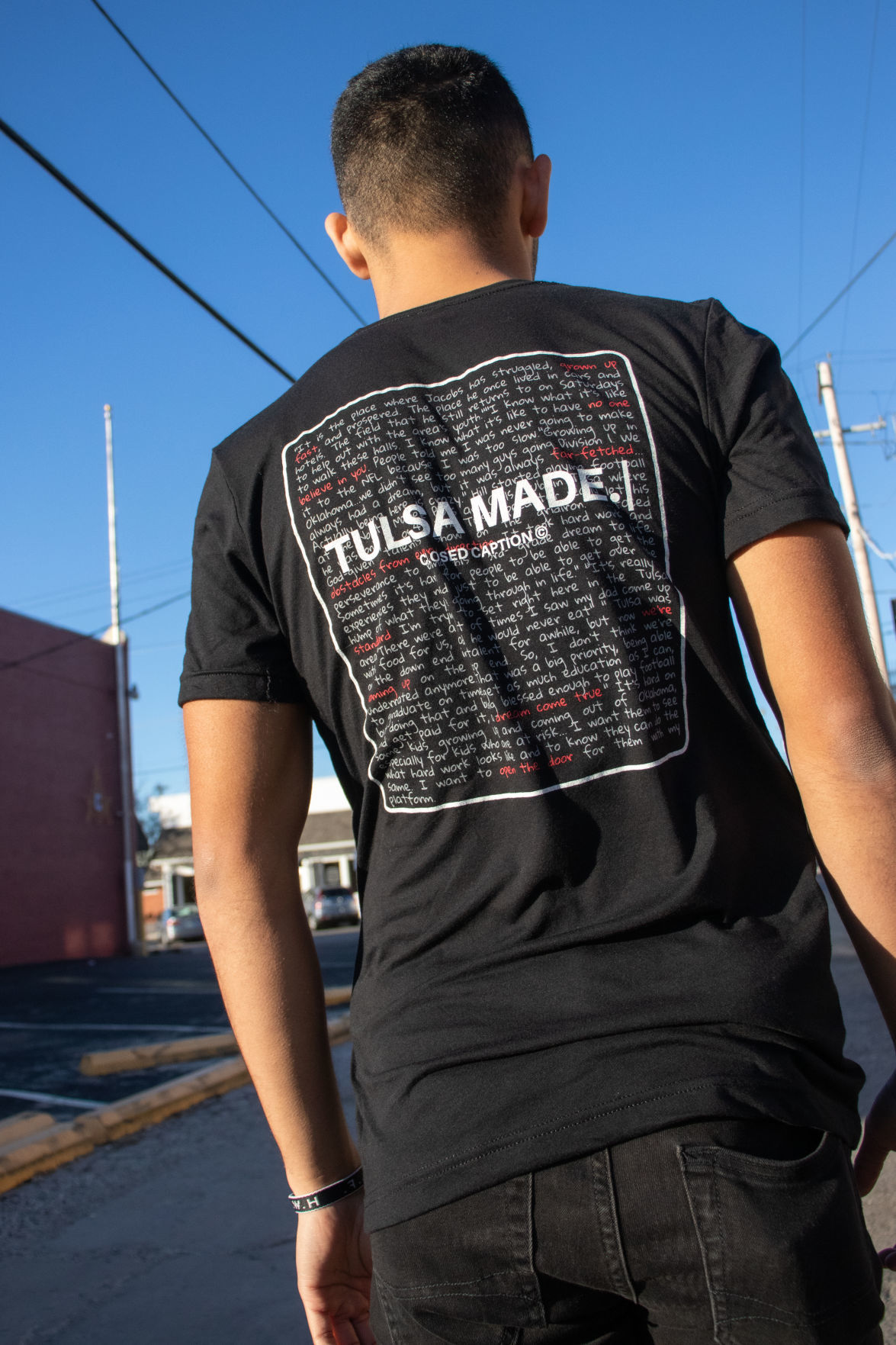 The back of Anthony Diaz’s “Tulsa Made” T-shirt includes inspirational quotes from Tulsa athletes. MATHEW ROBBINS/Courtesy

Anthony Diaz had to quit football at OSU because of a heart problem. Now with the backing of former OSU basketball player Chianti Roberts, Diaz is starting a company that sells “Tulsa Made” T-shirts. “I want it to be a shirt that everyone can have from Tulsa and be proud of who they are, whether they’re an athlete or not,” he said. MATHEW ROBBINS/Courtesy

The back of Anthony Diaz’s “Tulsa Made” T-shirt includes inspirational quotes from Tulsa athletes. MATHEW ROBBINS/Courtesy

Tulsa native Anthony Diaz has turned what started as a simple sketch on a piece of paper into a reality that he hopes will inspire Tulsans.

The Oklahoma State sophomore and former football walk-on drew a blank T-shirt on a piece of paper and wrote the words “Tulsa Made” on it about five months ago.

“I was like OK, I don’t know what this is,” Diaz said. “But I want it to be a shirt that everyone can have from Tulsa and be proud of who they are, whether they’re an athlete or not. Obviously, focusing on athletes and the grind of trying to make it.”

Diaz played football and ran track at Broken Arrow High School when he and his close friends felt there was an underappreciation for Tulsa athletes. Diaz wanted to do something about it. He sketched the idea of the Tulsa Made shirt about a week before the 2019 OSU school year and didn’t touch it again for a month.

He eventually brought the sketch back out and started sharing his idea.

The goal for the shirts is to create representation for athletes coming out of Tulsa and to also create a sense of hope and pride for the Tulsa community.

“Whenever this shirt is seen or the shirt is worn, whenever you see the words Tulsa Made, it’s like Nike. It’ll be almost like a status symbol."

Diaz taught himself graphic design but had no idea how to get the shirts made. He started asking around and that’s when OSU athletics academic counselor Charles Verner connected him with Chianti Roberts.

Roberts, a graduate of Oklahoma Christian School in Edmond, was on OSU's 1995 Final Four team. He now runs a company that makes Oklahoma-themed T-shirts and apparel. Roberts is also a member of a board of Oklahoma State affiliates that meets every month to discuss ways to better support minority students on campus. During one of these meetings, Verner mentioned Diaz to Roberts.

Diaz visited with Roberts and his wife in their home for about two hours and chatted about his idea. Roberts offered to finance Diaz’s upfront cost.

“He’s an extraordinary kid,” Roberts said of Diaz. “He has a lot of passion, a lot of drive, a lot of ambition. His ultimate goal is to basically affect the Tulsa community. He’s already a youth counselor. That’s his passion is to help kids in Tulsa, especially in the lower economic level.”

The shirt has the words “Tulsa Made” printed on the front. The back also has “Tulsa Made,” with a background filled with quotes by athletes from Tulsa.

“It has a real good feel and a real good look,” Roberts said. “It’s something that I thought when I saw it, ‘Man, this could do well.’ Especially with the message behind it about what he wants to do with the Tulsa community.”

One of the next steps for Diaz is to patent the term “Tulsa Made” and create a business. He has 24 T-shirts he is using to create the “24 Made” campaign. The goal is to get 24 major athletes or coaches who are Tulsa natives to agree to wear the shirt.

Air Force to ORU to OSU

Diaz has a unique athletic story. He signed to play cornerback at the Air Force Academy but felt he made the wrong decision and transferred Oral Roberts after six weeks of basic training. He ran track at ORU and eventually landed on the Oklahoma State football team this past season as a preferred walk-on. A preferred walk-on is guaranteed at least a roster spot.

His career with the Cowboys was short-lived when he collapsed in practice on Nov. 26 and was rushed to the hospital. The Cowboys had just finished drills when Diaz said he went to take a knee for a water break and went head-first to the ground. He said the trainers immediately came over and found he had no pulse.

“So for the next 10 minutes, they started performing CPR,” Diaz said. “No pulse was being found, therefore they had to use an ICD (implantable cardioverter-defibrillator) to bring me back to life because my heart just suddenly stopped.”

Multiple tests on Diaz all came back negative. The ICD, used to correct the pacing of the heart, is still in his left side near his ribs. He was told he could no longer play football.

“It almost feels like this happened in order for me to focus even more on (T-shirts) and almost bring a light to a place that’s very dark and awareness and a voice to a subject that’s not very talked about,” Diaz said. “It’s all flashing lights and cameras whenever you see, ‘Oh, he made it and he made it,’ but what about the kids who aren’t making it? What about the kids who are struggling and they don’t have any hope?

Diaz hasn’t priced his shirts yet. He is more focused on just getting them out there. But he said he wants them to be affordable to everybody.

“I want the third-grade AAU teams to have them all the way to the NBA players,” Diaz said. “… It’s about the people, it’s about the vision. It’s about what greatness comes out of this town, obviously through athletics but as a whole.”