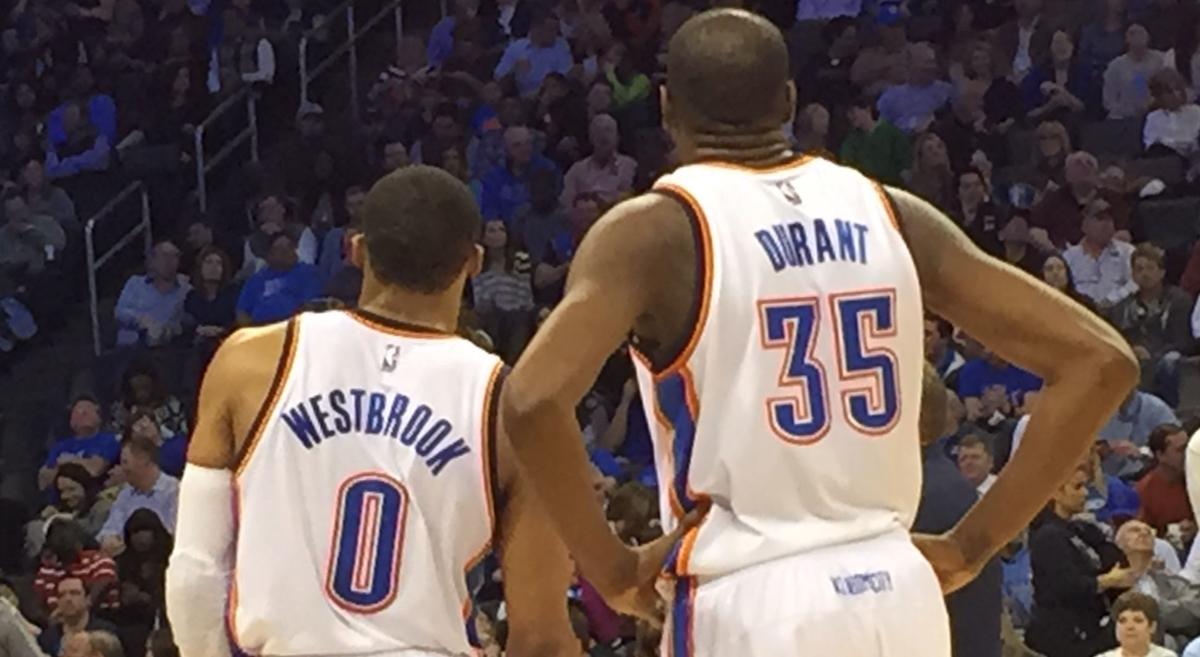 When Russell Westbrook and Kevin Durant were together on the Thunder roster, Oklahoma City had two of the top 10 players in the world. Durant left for Golden State in 2016. Westbrook was traded to Houston in July. BILL HAISTEN/Tulsa World 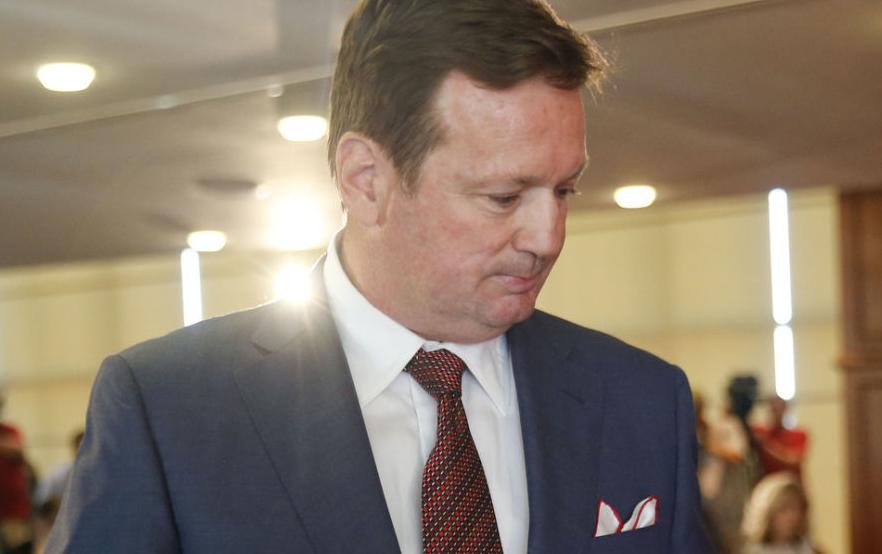 After coaching the OU program to 190 victories, one national title and 10 Big 12 championships in 18 seasons, Bob Stoops shocked Sooners fans with his June 2017 retirement.

When Russell Westbrook and Kevin Durant were together on the Thunder roster, Oklahoma City had two of the top 10 players in the world. Durant left for Golden State in 2016. Westbrook was traded to Houston in July. BILL HAISTEN/Tulsa World

After coaching the OU program to 190 victories, one national title and 10 Big 12 championships in 18 seasons, Bob Stoops shocked Sooners fans with his June 2017 retirement.

Memories of a decade

Game of the decade

On May 28, 2016, the Oklahoma City Thunder hosted the 73-win Golden State Warriors for Game 6 of the Western Conference finals. With a three-games-to-two series lead, the Thunder was on the brink of advancing to what would have been an NBA Finals meeting with LeBron James and the Cleveland Cavaliers. OKC led by seven points with five minutes left to play. While Golden State’s Klay Thompson was red-hot on big shots, OKC’s Kevin Durant and Russell Westbrook missed shots and committed turnovers. The Warriors prevailed 108-101 and followed with a Game 7 victory on their home floor. Game 6 was Durant’s final home game in a Thunder uniform.

Athlete of the decade

Mayfield gets this distinction because of the combination of Kevin Durant’s departure and Mayfield having becoming a Heisman Trophy quarterback and one of the more popular figures in OU football history.

Play of the decade

During the 2014 Bedlam game, and with the Sooners leading 35-28 with a minute left in the fourth period, OU booted a punt that pinned Oklahoma State at its own 15-yard line. OSU was flagged for running into the punter. The 5-yard mark-off would not have given the Sooners a first down, but Bob Stoops elected to punt again. Tyreek Hill, perhaps the fastest OSU football athlete ever, collected the punt and sprinted 92 yards for a stunning, tying touchdown. After having twice trailed by 14 points, the Cowboys prevailed 38-35 in overtime.

Most sobering story of the decade

In July 2016, Allan Trimble publicly acknowledged a grim diagnosis: doctors determined that the Jenks football coach had ALS, also known as Lou Gehrig’s disease. As Trimble coached the 2016 and 2017 Trojan football teams, he became the first active high school coach to be selected for membership in the Oklahoma Sports Hall of Fame. A devout Christian and family man, Trimble died on Dec. 1 at the age of 56. In his 22 seasons as the Jenks head coach, the Trojans won 13 state championships.

In Oklahoma sports, 2010-19 was an eventful decade and rife with change.

At the starting line of 2010-19, Lincoln Riley was East Carolina’s first-year offensive coordinator.

Todd Graham was the University of Tulsa’s head football coach.

After having coached the Oklahoma State basketball program for only one season, Travis Ford was given a revised, 10-year contract.

Archie Bradley was Broken Arrow’s quarterback, while Alex Ross was a dominant Jenks running back and Tyler Lockett an impact wide receiver at Booker T. Washington.

In the 2010 NFL draft, six of the top 24 picks overall had been on Bedlam rosters: OU’s Sam Bradford, Gerald McCoy, Trent Williams and Jermaine Gresham; and OSU’s Russell Okung and Dez Bryant.

With 21-year-old Kevin Durant, 21-year-old Russell Westbrook and 20-year-old rookie James Harden, the 2009-10 Thunder recorded 50 victories. At the end of its second season in Oklahoma, the Thunder stressed the Los Angeles Lakers in a first-round playoff series.

As Durant captured three NBA scoring titles and was voted the 2013-14 NBA Most Valuable Player, and as he and the Thunder made deep runs in the postseason, he was voted into the Oklahoma Hall of Fame.

An excerpt from his Hall of Fame bio: “Kevin Durant has established himself as a pillar of the Oklahoma community.”

At that time, he was the most popular person in the state.

A few months later — on July 4, 2016, a date which will live in Oklahoma infamy — Durant announced he would be signing with the Golden State Warriors.

Eleven months after that, after 18 seasons of coaching OU football to one national title and 10 Big 12 championships, Bob Stoops jolted Sooners fans with a totally unexpected retirement.

The most shocking story of the decade? It’s an exact tie: Durant’s move to the Warriors and the Stoops news conference of June 7, 2017.

While the middle class got a bit of a positive bump, the head-coaching class soared to pay levels that not so long ago would have seemed unimaginable.

In 2010, Stoops made $3.875 million while OSU’s Mike Gundy collected $1.925 million. At the University of Tulsa in 2013-14, football coach Bill Blankenship made $630,000 while basketball coach Danny Manning collected about $400,000 while driving his team to the Conference USA Tournament title and an NCAA Tournament appearance.

The 2019 compensation for those same jobs: OU’s Riley currently gets $6 million and Gundy gets $5.125 million, while TU’s Philip Montgomery and Frank Haith each are in the $1.5 million neighborhood.

Everything changed after Bill Blankenship was hired to coach the Owasso Rams. Owasso was the Class 6AI champion in 2017 and 2019. In 2018, Broken Arrow finally captured a title — the first in school history.

For OU football, 2000-09 was a decade for the reestablishment of championship standards. After a terrible decade of the ’90s, the Sooners in 2000-09 captured one national title, six Big 12 titles and recorded a total of 110 victories.

In 2010-19, the Sooners captured seven Big 12 titles and recorded 109 victories. There were four College Football Playoff appearances, but no CFP wins and no national championship.

For Oklahoma State football, 2000-09 was a decade for establishing positive consistency. There were seven winning seasons. In 2010-19, Oklahoma State had by far its most successful decade with six seasons of at least 10 wins and 93 victories overall.

The most accomplished of all OSU football teams — the 2011 Cowboys — were Big 12 champions and finished 12-1.

While Buddy Hield-led OU made a surprise run to the 2016 Final Four (during which the Sooners were crushed by Villanova), this decade in Oklahoma college basketball fell far short of what was seen during the 1990s and 2000s.

Attendance has continued to plummet. For some games at TU and Oral Roberts, there almost isn’t any attendance at all. The Golden Hurricane still has not recorded an NCAA Tournament victory since 2003.