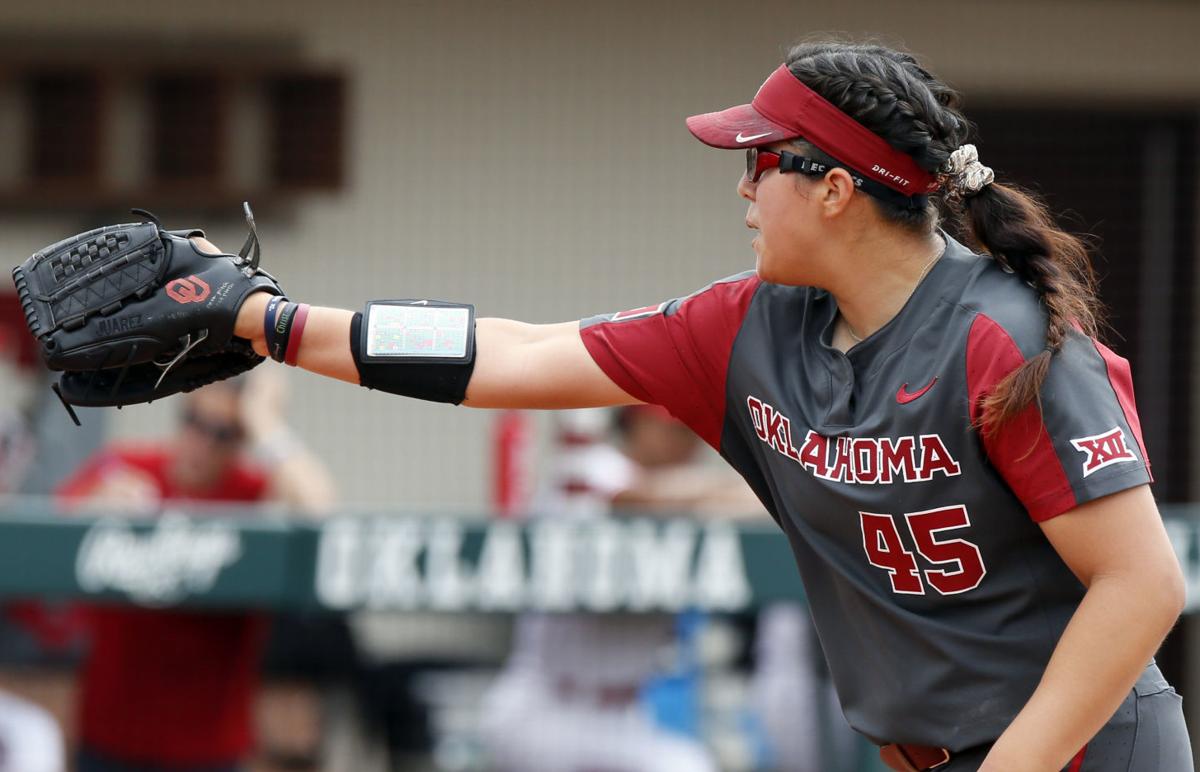 Oklahoma pitcher Giselle Juarez points her glove at home plate after a strikeout to end the third inning during the Sooners’ 4-0 win over Wisconsin Saturday in the NCAA Norman Regional. Nate Billings/The Oklahoman 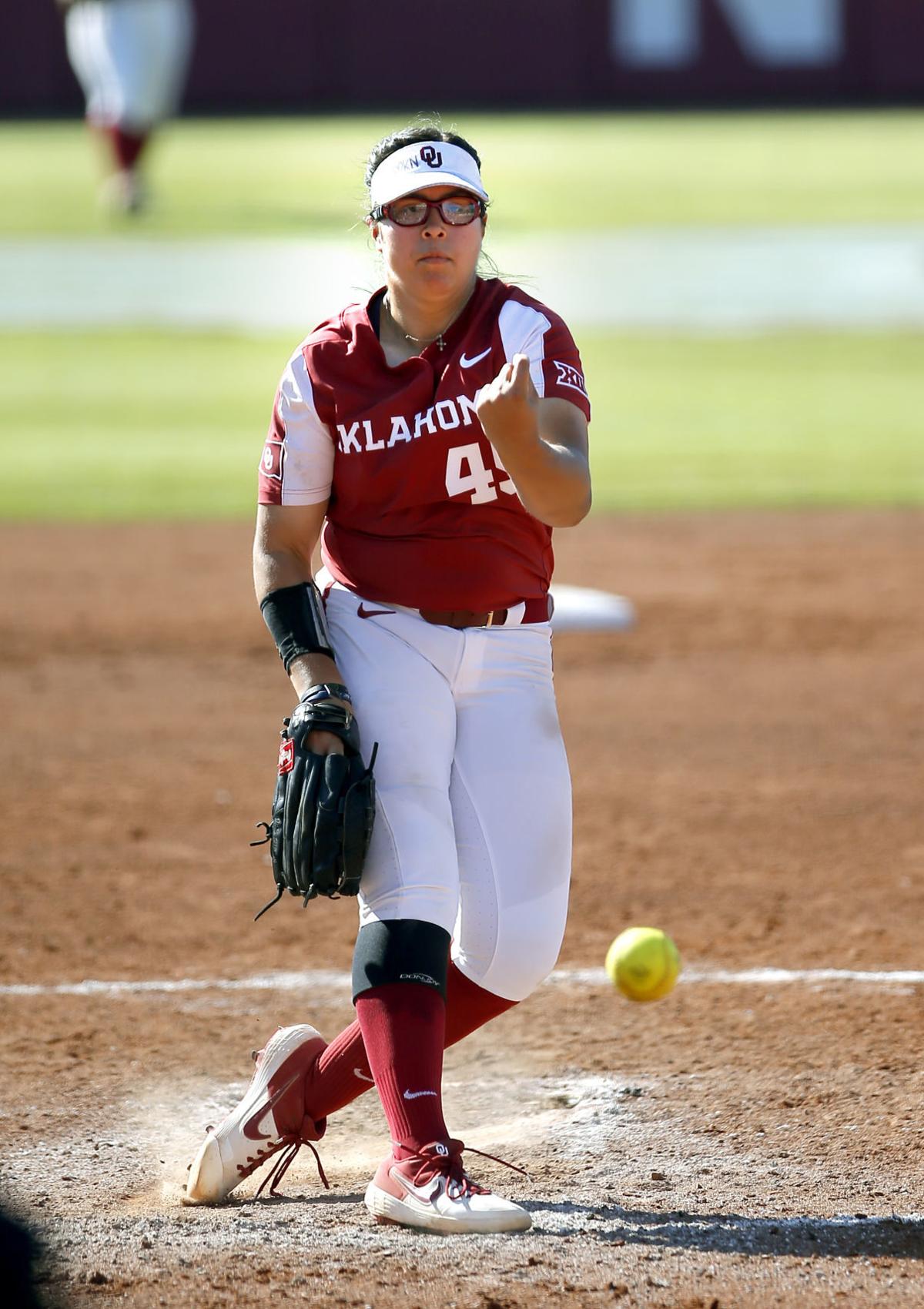 Oklahoma’s Giselle Juarez pitched a complete game shutout Sunday in the Sooners’ 2-0 win over Wisconsin to win the the NCAA Norman Regional.

Oklahoma pitcher Giselle Juarez points her glove at home plate after a strikeout to end the third inning during the Sooners’ 4-0 win over Wisconsin Saturday in the NCAA Norman Regional. Nate Billings/The Oklahoman

Oklahoma’s Giselle Juarez pitched a complete game shutout Sunday in the Sooners’ 2-0 win over Wisconsin to win the the NCAA Norman Regional.

Her introduction to pitching came when she was around 12 years old and playing recreational softball. Like all newcomers to the game, she tried all positions including pitcher.

A large target was set up and one of the country’s most intimidating pitchers didn’t come close to hitting it.

“Then I hit it once and I was like, ‘Oh man,’” Juarez said. “My mom asked if I really wanted lessons. I said yes and kept bugging her. I would not stop.”

Like most parents, her mom was worried about her daughter getting hit with the ball. But soon she calmed while a young Giselle constantly threw pitches to her father.

“Both of them kind of got me into it, but I was the one that was like ‘Let me pitch,’” Juarez said.

The Sooners junior saw work in all four games of the NCAA Norman Regional over the weekend. She took part in a combined perfect game, threw a no-hitter and then — after taking her first loss of the season — bounced back with a shutout victory over Wisconsin in Sunday’s elimination game.

Juarez has been an important addition to the Sooners’ staff this season.

She spent her first two seasons at Arizona State before deciding to transfer for undisclosed reasons. In 2018, she finished 22-6 with a 1.22 ERA at ASU before her team was eliminated by the Sooners in the Women’s College World Series. The pitcher that beat her that day was OU’s Paige Parker, another powerful left-handed thrower.

Juarez announced her decision to leave Arizona State in mid-November and arrived on campus just weeks before the 2019 opener.

“I know it sounds cliché but this place sure is homey,” she said. “I don’t really talk about why I transferred but I know it was like a blessing in disguise because this place has been like home.

“These girls are different. They are amazing … God had his plan and I’m glad I followed it.”

“For her to come and walk away from a program and come into ours and try to be prepared in three weeks, I’ve never seen anything like that,” OU coach Patty Gasso said last weekend. “To see where she is now is just a testament to her surrendering what she went through. She trusted us and allowed us into her world. That was really important for us to grow together.

“Right now, she’s probably one of the hottest pitchers in the country.”

Juarez said transferring to OU was probably the most adult decision she’s ever had to make.

“When I came in, they were so open-armed and so accepting and they made it really easy to be able to transfer in and then made me feel comfortable to be myself on the mound,” Juarez said. “I think that’s been one of the biggest things — having that acceptance.”

Juarez joins one of softball’s top legacies as an Oklahoma pitcher. She battled Parker last season, and is now being mentored by Keilani Ricketts, the former OU standout who is a volunteer coach.

Juarez always talks about how thankful she is for her current pitching staff. Mariah Lopez and Shannon Saile have been major factors in the Sooners’ success.

“It comes back to being a team within a team,” Juarez said. “It’s knowing that we’re going to do it together. It’s not an individual thing. It’s being selfless in every moment. And for all of us, we could all be starters, we all could be relievers and closers. It’s something that’s cool and different about our staff, knowing that we have to work together and accept our role, whatever is given to us on that day.”

Added Gasso: “These pitchers, all of them, could be the No. 1 with any program. But they understand that this connection is important to get what they want. They surrender their ego for it. I love that about them.”