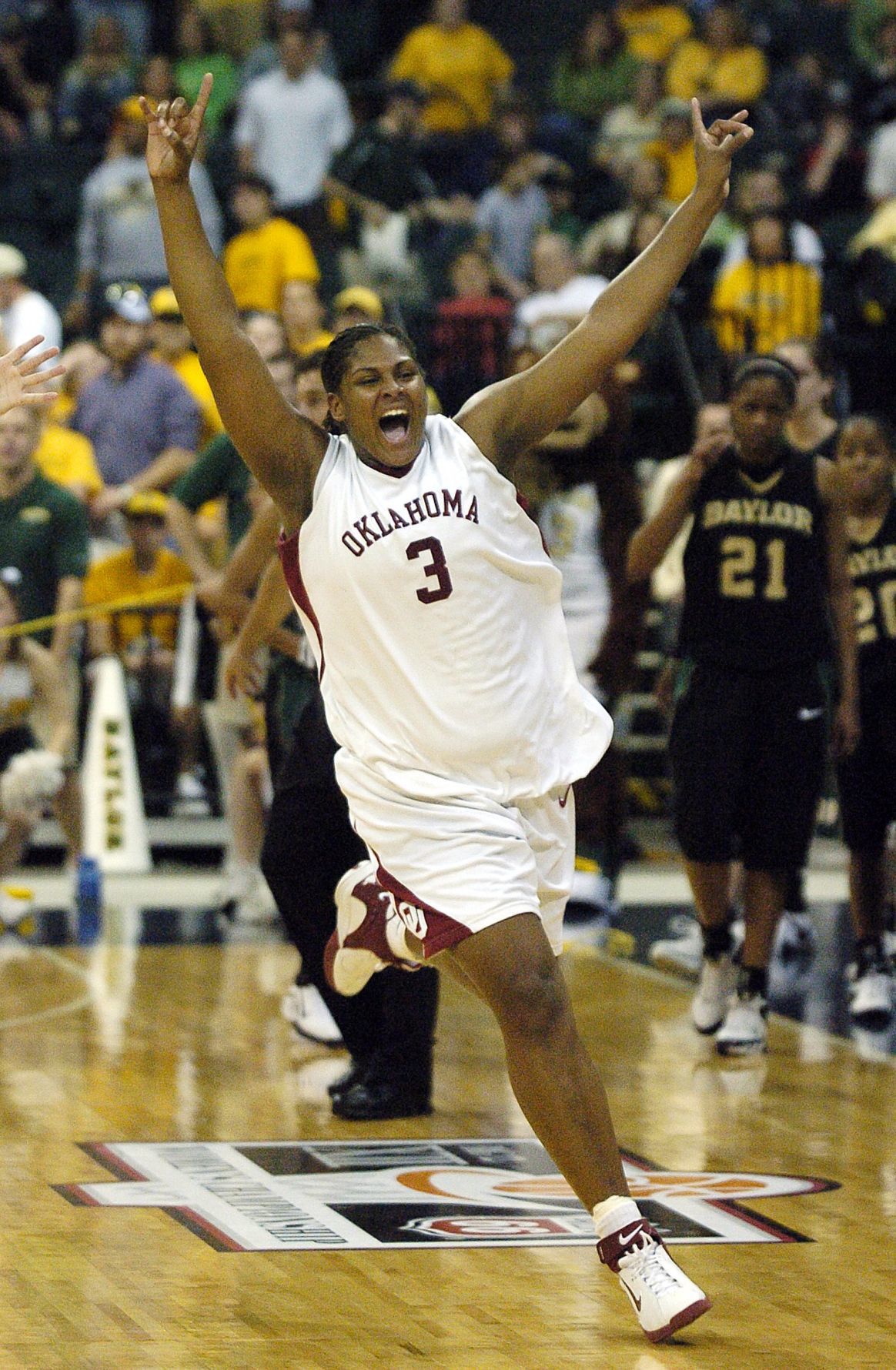 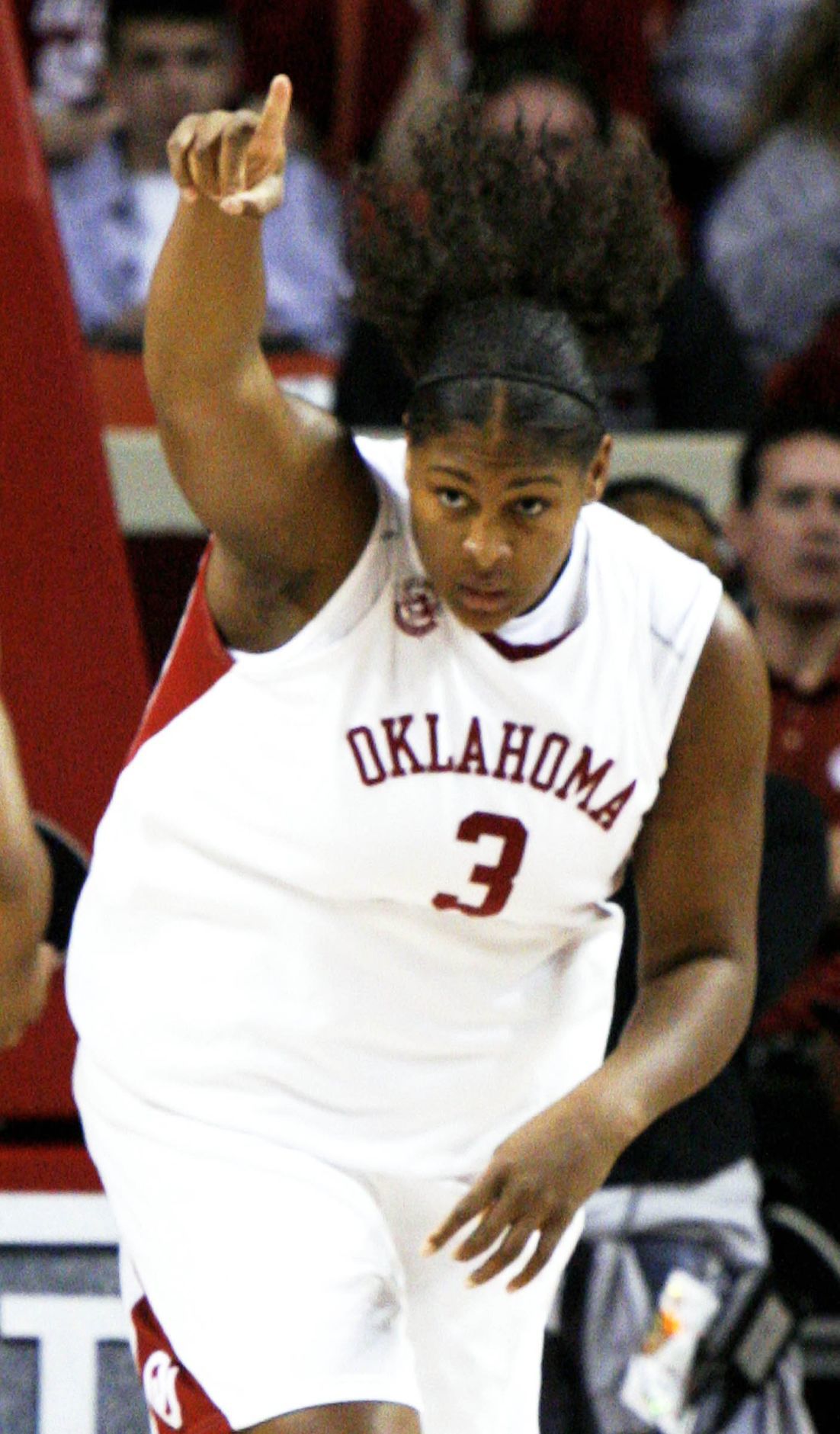 OU’s Courtney Paris celebrates after scoring against OSU during their game in Norman. Tulsa World file

OU’s Courtney Paris celebrates after scoring against OSU during their game in Norman. Tulsa World file

Now that Paris is on the Oklahoma women’s basketball coaching staff, would she call her former head coach “Sherri” or “Coach Coale?”

“I think Coach Coale does a good job not just being a basketball coach, but teaching people how to be. I think if there’s a mentor, someone helping me make the next step, she’s the best to do it.”

Paris said her playing days for the Sooners will always remain special.

“I learned how to be a person, how to be a woman, how to be confident and not just be a basketball player,” Paris said. “And obviously I had this career that was great and I played in this era that was great, but I became a full person at OU on and off the court. That was the biggest thing I learned there.”

Paris retired from the WNBA after a 10-year career and went out with a world championship last season with Seattle. Her initial plan was to continue playing internationally — she just completed a season with Ormansporin Turkey — when she started thinking about her future.

Paris said that as she got older, “my career’s gotten harder, things started to hurt.”

She discovered a love for mentoring younger players and watching film with coaches. When Coale asked if she wanted to join the staff, “it was like, this made perfect sense to me. This opportunity feels good to me. With that, I love Oklahoma, I believe in Oklahoma so this was an easy move for me to make,” she said.

Coale has had plenty of players during their careers who either wanted to become a coach or didn’t plan on joining the profession. The OU coach had been impressed with Paris during her post-college career.

“In our communication with one another, I felt that she was getting to the point in her career where she was ready to stop playing professionally,” Coale said. “It obviously became a thought at that point, because she certainly has the ‘it’ factor. There’s no doubt about that.

“Every great player doesn’t necessarily make a great coach. Sometimes it’s hard for great players to be great coaches because they can’t understand why something was so easy for them and so hard for everybody else. The great coaches have connectability. They’re sticky. They draw people to them and connect to them. And she has the ‘it’ factor in spades. So no doubt in my mind she’ll be terrific in this role.”

While Paris considered herself “old,” she is only 32. Many on the Oklahoma roster remember her playing days from 2005-09 and, at the time of her graduation, she held 20 NCAA Division I records.

“When you’re playing basketball, you feel 20 years old your whole career. Not your body, your mind. You’re still in it,” Paris said. “How you are in the locker room, the process keeps you young. I can definitely relate to younger players, but also I have all this experience and all these ups and downs. My professional career, it’s so funny, it wasn’t like my college career. It started off really, really hard so it gave me this perspective.

“I played every single position on every single team, as far as my role on the team and it taught me so much. It’s hard to tell kids, well, I know how it feels, when you don’t know how it feels. It’s hard to relate to the player that’s not playing when you’re the star player. But now I can relate to every situation, because I played every role. I just feel like it’s gonna help me in this situation.”

Paris joins a staff that includes Jackie Stiles, who is in the Women’s Basketball Hall of Fame after a prolific college career at Missouri State and had a solid WNBA career cut short by injuries.

Coale said current and future OU players will benefit from learning from Stiles (NCAA’s No. 3 overall scorer) and Paris (OU’s all-time leading scorer, four-time All-American). It won’t just be the natural talent, but the hard work they put in which can be the story of the two players.

“That is the magic. So, if you play in our program, you get a front-row seat to the magic. I think that will be as much of a draw as the records that they hold or the points that they’ve scored.”

Courtney Paris played four seasons for the Tulsa Shock, a WNBA franchise which played in the BOK Center from 2010-15.

“Those were the best days. I really was able to make my stake in the WNBA in Tulsa,” Paris said. “It was in Oklahoma, so much support. I loved playing there and it helped me get my confidence going back in the professional game.”