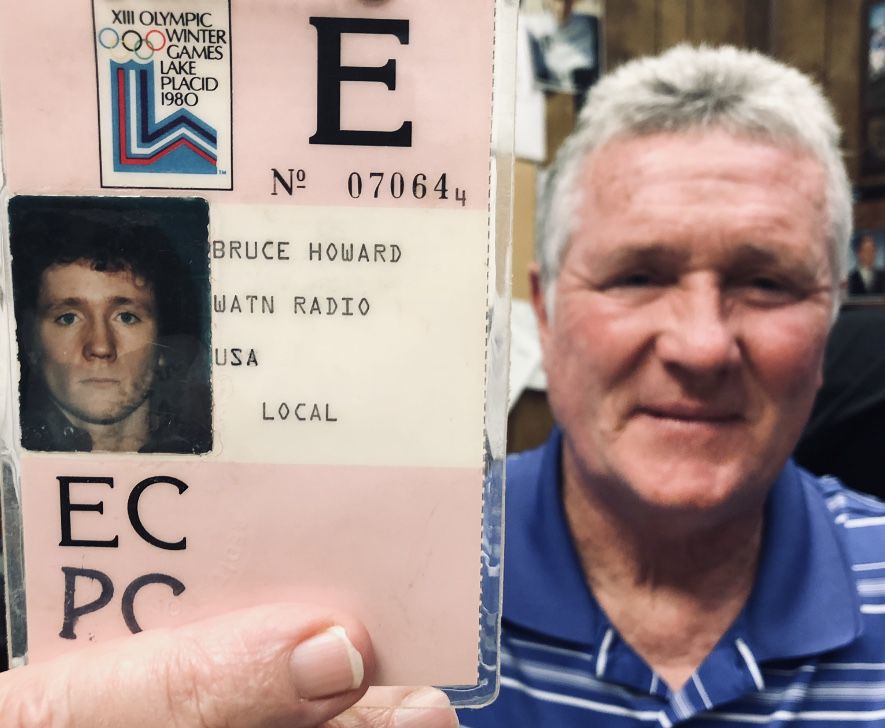 As time expired on the United States’ 4-3 victory over the Soviet Union in the 1980 Winter Olympics, American players celebrated what still is considered perhaps the greatest upset in team-sports history. Associated Press file photo

As time expired on the United States’ 4-3 victory over the Soviet Union in the 1980 Winter Olympics, American players celebrated what still is considered perhaps the greatest upset in team-sports history. Associated Press file photo

In March 1994, during Bruce Howard’s first season as the University of Tulsa’s radio play-by-play voice, the Golden Hurricane basketball team was a 12 seed in the NCAA Tournament.

Matched with fifth-seeded and heavily favored UCLA in a first-round game played at Oklahoma City, TU rolled to a shocking lead of 46-17 before winning 112-102.

Most of the TU fans who were in the arena or watched the CBS telecast would agree that it was the most memorable upset they ever witnessed.

For Howard’s personal “biggest upset” index, TU-UCLA would rank No. 2.

Next week, 40 years will have passed since Howard — as a 21-year-old radio reporter for WATN-AM in Watertown, New York — covered the Miracle on Ice hockey game during the 1980 Winter Olympics at Lake Placid, New York.

During the final seconds, Al Michaels put an exclamation mark on a game still considered to have been perhaps the greatest upset in sports history: “Do you believe in miracles? Yes!”

There was no press-box type of arrangement for media members. At 7,700 seats, the Olympic Fieldhouse was comparable in size to the old Tulsa Convention Center.

For U.S.-Soviet Union hockey, Michaels — then a 35-year-old rising star for ABC Sports — was positioned at a basic table situated within a section of seats.

A couple of rows behind Michaels sat Howard, who sprinted to a pay phone so that he could break the news to WATN-AM listeners that Team USA had conquered the mighty Soviets.

Howard did literally break that story in Watertown because there was no internet or social media in 1980, and the ABC telecast was tape-delayed. The Miracle on Ice classic was not televised live.

“It was unforgettable, of course,” Howard recalls. “It was a great experience for a young reporter just getting started in the business.”

The WATN station format included a little bit of everything — top-40 pop, rock and country music, along with news and sports reports. Howard was a sports reporter who doubled as a 3-7 p.m. disc jockey.

When he secured a press credential for the Lake Placid Olympics, Howard had been on the WATN staff since the summer of 1978. His hometown was Scipio Center, New York — a tiny community in the north-central section of the state.

As Howard was employed by a small-market station, he pinched pennies on Olympic expenses. He did not stay at a hotel. Instead, he secured a spot at a campsite.

The station traded some advertising spots for the use of a modestly outfitted recreational vehicle. Howard made the 125-mile drive from Watertown to Lake Placid. The vehicle’s heater failed every night.

A Lake Placid winter isn’t like a Tulsa winter. During the two weeks of 1980 Olympic competition, the average overnight low temperature was minus-3 degrees. In those conditions, Howard attempted to sleep in a space that was heated only sporadically.

“I would wake up, freezing cold, and then flip a switch to get the heat back on,” he said last week. “And then I’d take a cold shower and head back to the Olympic venues. I didn’t care. I was just pumped to be at the Olympics.”

Lake Placid High School was the designated media center. When ABC legend Chris Schenkel visited the media center, he introduced himself to Howard.

“For a guy who’d had such a great career in the major leagues of broadcasting, Chris Schenkel was the kindest man,” Howard said. “I showed him around the press center. I remember there being rows and rows of manual typewriters.

“When I would call my station with Olympic reports, I would talk through the handset of a pay phone. I would have (comments) from coaches and athletes on cassette tapes, so I would hold the cassette recorder close to the mouthpiece on the phone and let it roll. It wasn’t very technologically advanced, but it worked. A station from Rochester rented a house and had a little studio. They did it big-time.”

Howard covered all events that involved skiing and skating, but, obviously, hockey was the defining competition of the 1980 Winter Games.

“The United States’ first game of the tournament was against Sweden, and Sweden was really good,” Howard remembers. “There were about 1,500 people there. Bill Baker slapped in a shot and the U.S. got a 2-2 tie. Everyone said, ‘Hey, that’s a pretty good result.’

“The second opponent was Czechoslovakia — a team considered the second best in the world, behind the Soviets. The U.S. beat them 7-3. Our guys were flying all over the ice. That was the first game when the fans started to chant, ‘USA! USA!’ ”

In the medal round that involved the U.S., Soviet Union, Finland and Sweden, there was a round-robin format. It was predetermined that the U.S. would face the Soviets and Finland.

The enraged Soviet coach benched Vladislav Tretiak — the world’s best goalie. With 10 minutes left, Mike Eruzione scored to give the U.S. its 4-3 lead.

The Americans finished the mind-blowing upset in spite of a remarkable discrepancy on scoring chances. The Soviets totaled 39 shots on goal against only 16 for the U.S.

Two days after the Miracle game, the United States defeated Finland 4-2 and completed its quest for the gold medal.

“I watched the Miracle on Ice game again a few days ago,” Howard said. “(U.S. goalie) Jim Craig made two or three good saves, but it wasn’t like the ‘Miracle’ movie that showed him standing on his head and making a bunch of incredible saves.

“The truth was, the U.S. defensemen were unbelievable in that game and in that final 10 minutes. Before those Olympics, nobody could skate with the Soviets, but the Americans did that night. Jim Craig was good. He allowed maybe one soft goal in the whole tournament. But the whole U.S. team was brilliant.”

Howard immediately recognized the historic significance of the Miracle on Ice outcome. He saved his press credential and game ticket.

On Feb. 22, 1980, Howard was a single 21-year-old. Nine years later, he was a married man who moved to Tulsa to become the radio voice of the Drillers.

Now 61, Howard has worked hundreds of assignments for WATN, for the Drillers and for TU. He’ll work hundreds more.

After he retires and unpacks his professional memories, it’s highly unlikely that any event will have supplanted the Miracle on Ice as the gold-medal moment in Howard’s cool, lengthy career.