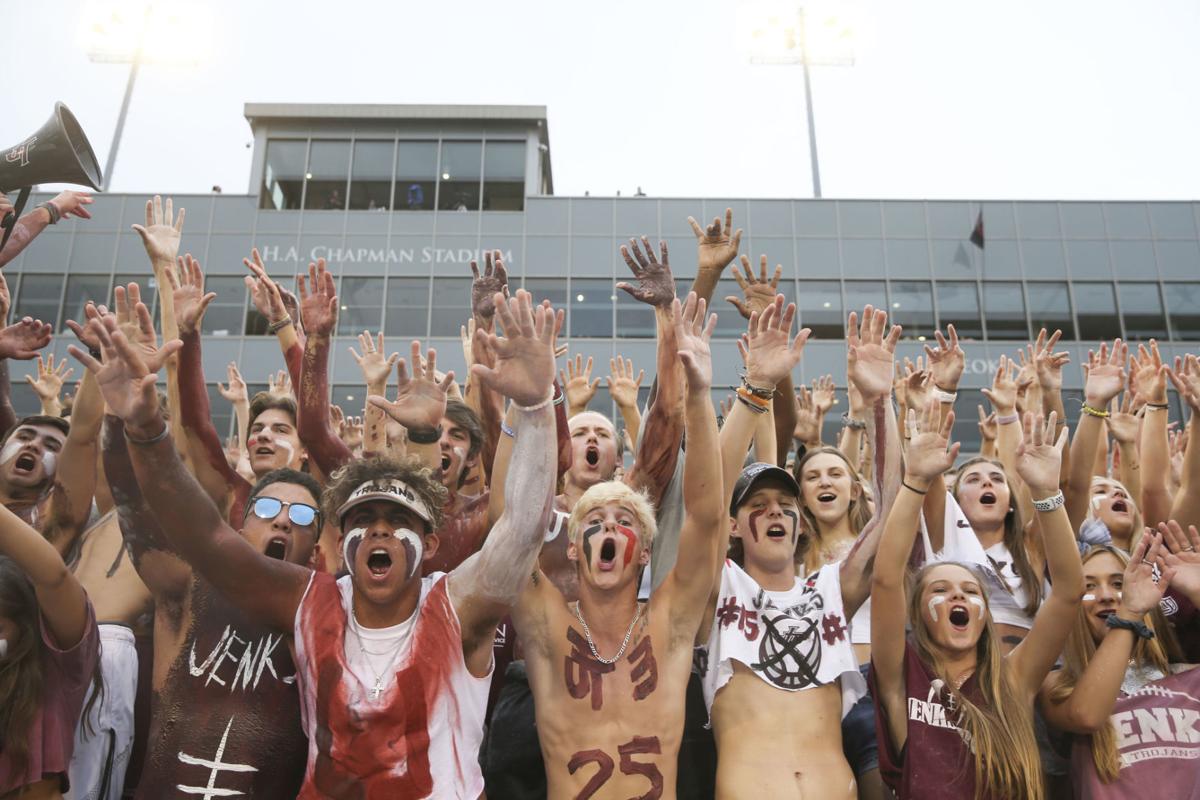 Jenks fans cheer before kickoff during the MidFirst Bank Backyard Bowl between Jenks and Union at H.A. Chapman Stadium in Tulsa on Sept. 7, 2018. IAN MAULE/Tulsa World 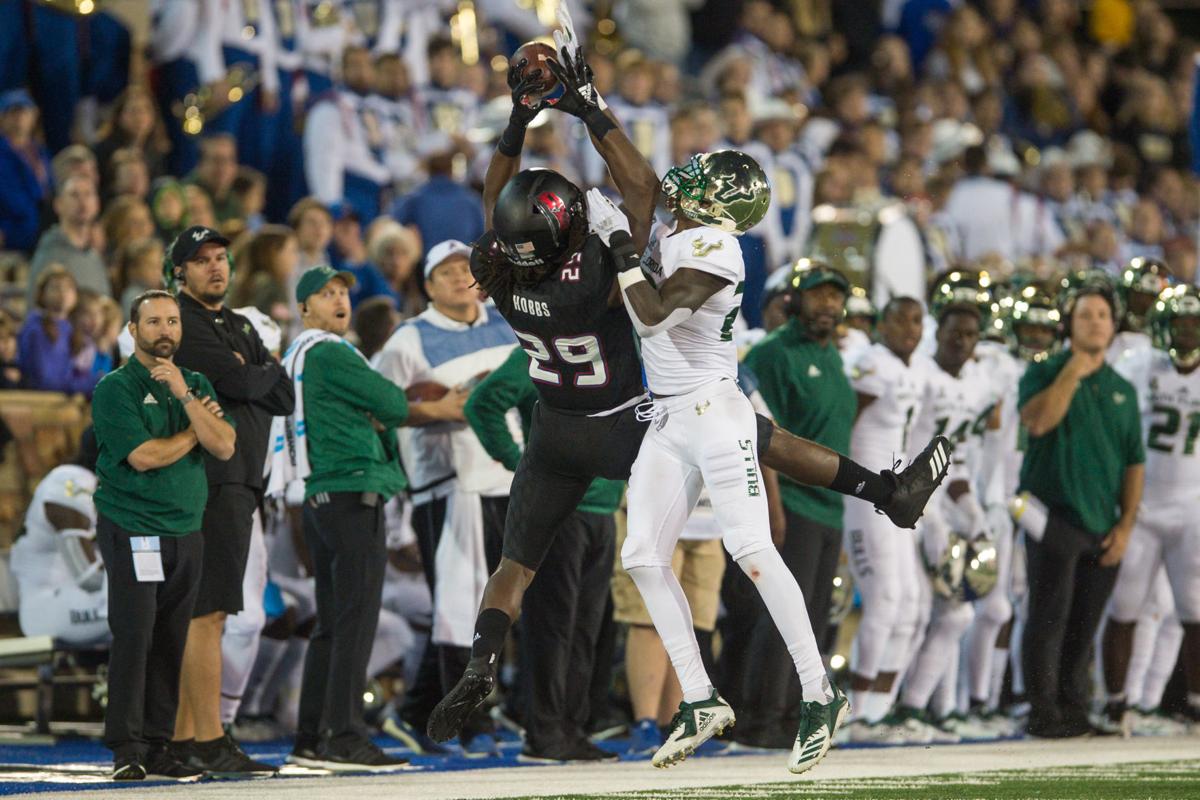 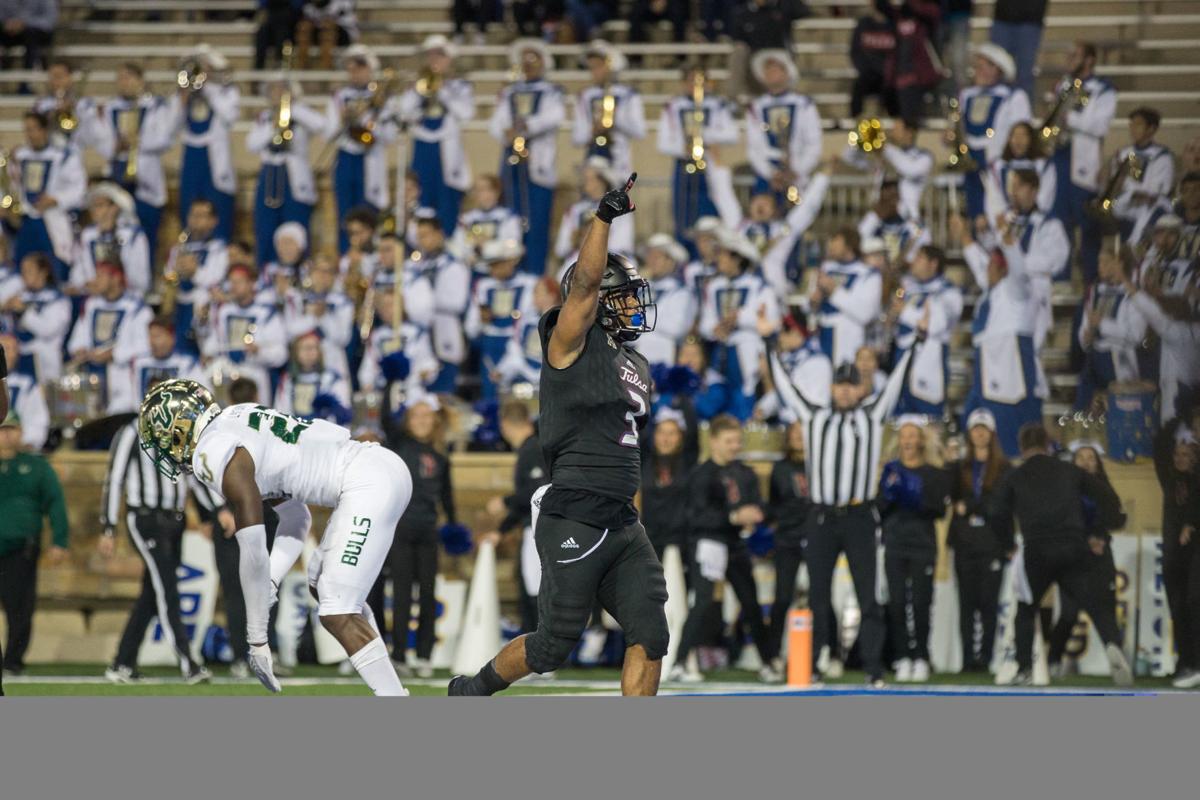 Tulsa Golden Hurricane running back Shamari Brooks points up in the stand after scoring a touchdown against the South Florida Bulls at H.A. Chapman Stadium in Tulsa, OK on 10/12/18. BRETT ROJO/For the Tulsa World

Jenks fans cheer before kickoff during the MidFirst Bank Backyard Bowl between Jenks and Union at H.A. Chapman Stadium in Tulsa on Sept. 7, 2018. IAN MAULE/Tulsa World

Tulsa Golden Hurricane running back Shamari Brooks points up in the stand after scoring a touchdown against the South Florida Bulls at H.A. Chapman Stadium in Tulsa, OK on 10/12/18. BRETT ROJO/For the Tulsa World

Welcome to Beyond the Sideline, a continuing feature this fall in the World where we look at the stories that make Tulsa-area high school football unique.

Friday night lights were intended for high school football, uniting a community around the gridiron.

But in recent years, as more television cameras have turned to college football on Friday nights, the spotlight has become shared.

“As an old high school coach, I think Friday nights are high school football nights,” University of Tulsa coach Philip Montgomery said. “To me, that’s kind of sacred ground. I hate crossing that barrier. I would rather college games be on Saturday and high school games be on Friday.”

This particular Friday night not only signals the official start of the Oklahoma high school football season, but it also is the season opener for TU, which visits No. 18 Michigan State at 6 p.m., and for Oklahoma State, playing at Oregon State at 9:30. Both games will air on FS1.

The American Football Coaches Association, which has a membership of more than 11,000 coaches on all levels of competition, has campaigned this year for the elimination of college games being scheduled on Fridays.

“It seems very strange to invade the territory of the hand that is feeding college football because that is where college programs get their student-athletes from.”

TV networks determine the game’s day and time, and Friday nights represent another opportunity to produce ratings that will lead to more advertising revenue. Last season, an average of 1.2 million people watched the 10 Friday games broadcast on ESPN, not including ones on the day after Thanksgiving, an ESPN spokesman said.

“I don’t think we can dictate (when games are played),” OSU coach Mike Gundy said. “You can say, ‘I want to play every Saturday at 2:30 in the afternoon’ or ‘I want to play a 6 o’clock game in September.’ But you’re wasting your time. TV pays the bills. We do what they say.”

Although the viewership for FS1, a channel not typically included on basic cable, is close to half of ESPN’s, there is a significantly higher-profile platform that comes with playing on a Friday night. Only four other FBS games will be televised during TU’s game and three during OSU’s game, and Friday night games have developed a reputation for being entertaining and unpredictable.

“Even if it’s not a marquee game — and almost every game is on TV now — it’s still a primetime slot and I think coaches and players still feel that,” said ESPN play-by-play commentator Adam Amin, who has done several seasons of Friday night assignments. “You’re often the only game in town, (so) fans’ attention is locked in on that one game. I think that energy, along with the shorter week, can often lead to some weird things happening.”

Playing on a non-Saturday has traditionally been a more common occurrence for teams outside the Power Five. TU has had 10 Friday games in the past 15 years compared to four for OSU, and the Hurricane has played six American Athletic Conference games on Fridays since joining the league in 2014.

“I think it’s very important to our conference to play those Friday games. It’s really critical to the survival of our conference as a major TV entity. We have a great product on Saturdays, too. We have great Thursday games. Fridays are important and they’re more valuable than Thursdays because you don’t have the NFL sitting there.”

While a Friday road game requires travel on Thursday and disrupts players’ class schedules more, coaches would prefer that situation rather than playing at home on a Friday.

“We get only six home games a year,” said Montgomery, whose team hosts UCF on Friday, Nov. 8. “At those six home games, we have the ability to bring recruits in and they can watch a game, come down on the field prior to the game and we get to visit with them and their parents before and maybe after.

Oklahoma high school football remains a major draw, with typical crowds of more than 10,000 for the annual Backyard Bowl between Jenks and Union, but not all high school games are on Friday nights. For Week 0 games out of state, Jenks played Thursday night while Broken Arrow, Sand Springs and Booker T. Washington are among those playing Saturday night.

Get complete coverage of high school football all season at OKPrepsExtra.com