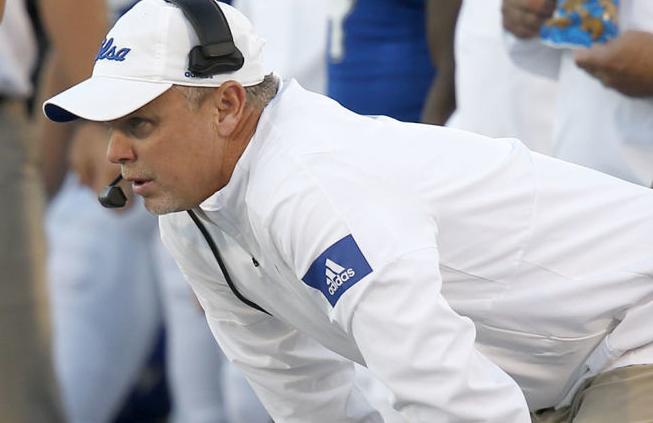 Tulsa football coach Philip Montgomery isn’t going to look for excuses as his school delays football players’ return to campus no sooner than July 6. “Let’s take care of our business and do the best we can with what we have,” he said. STEPHEN PINGRY/Tulsa World file 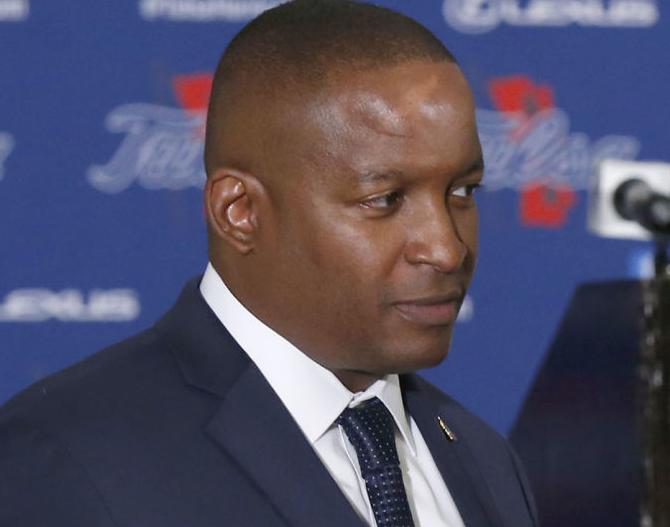 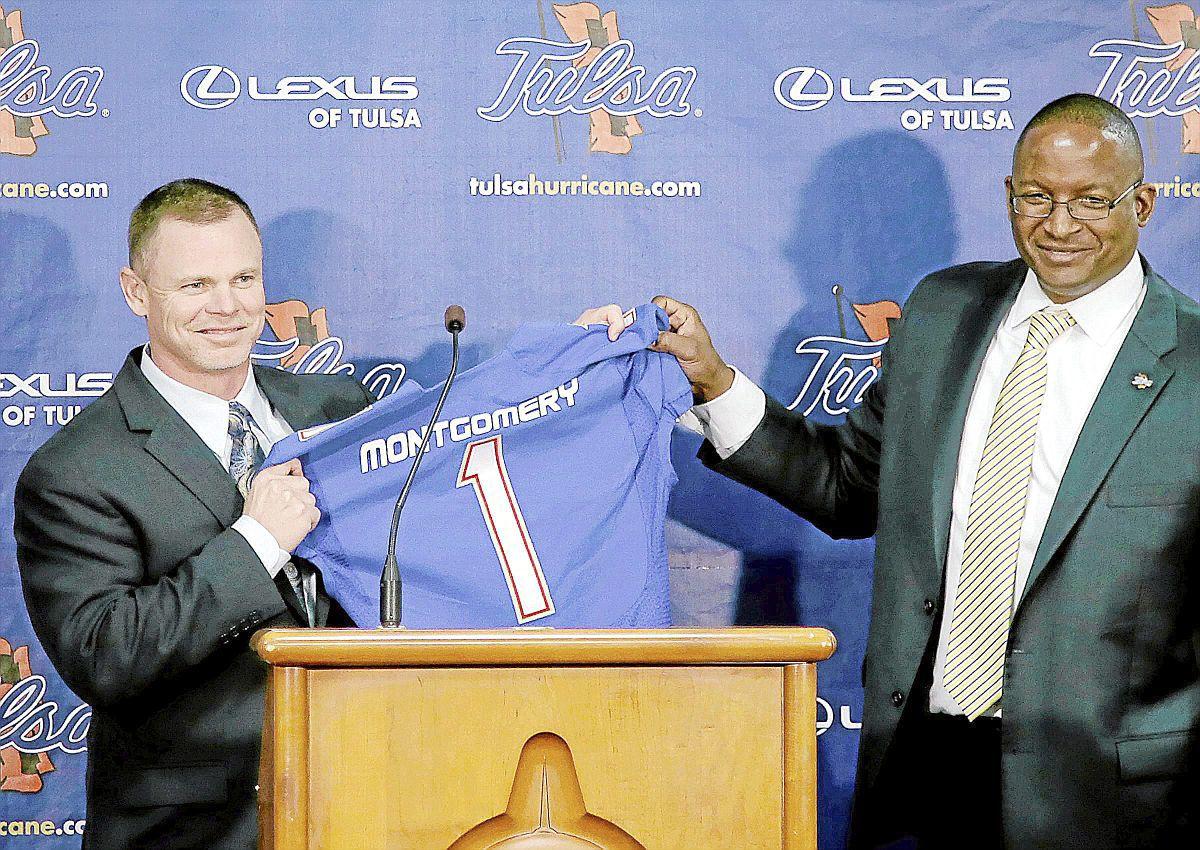 Football coach Philip Montgomery (left) athletic director Derrick Gragg are on the same page when it comes to bringing players back to campus. “The health and safety of our students, faculty and staff are at the forefront of every decision that we have made,” Gragg said. Tulsa World file

Tulsa football coach Philip Montgomery isn’t going to look for excuses as his school delays football players’ return to campus no sooner than July 6. “Let’s take care of our business and do the best we can with what we have,” he said. STEPHEN PINGRY/Tulsa World file

Football coach Philip Montgomery (left) athletic director Derrick Gragg are on the same page when it comes to bringing players back to campus. “The health and safety of our students, faculty and staff are at the forefront of every decision that we have made,” Gragg said. Tulsa World file

There are football programs poised to take quick advantage of the NCAA’s vote to allow athletes to return to campus as soon as June 1, Ohio State, LSU, Kansas State and Louisville among them.

The University of Tulsa has a different timetable.

“Our current plans are that student-athletes will not return to campus before July 6,” TU athletic director Derrick Gragg announced Thursday. “The health and safety of our students, faculty and staff are at the forefront of every decision that we have made.”

The university must safeguard its hygiene protocol. It must secure testing capability. It must reconfigure to promote social distancing. That takes more time on some campuses in some cities with more complications and less resources than it does others.

A pandemic isn’t one-size-fits-all when it attacks, and so we can’t be uniform to respond. That’s hard to accept in situations like the return of college football, where coaches and athletes live to compete and all they seek in return is a fair shot.

Getting your players back July 6 doesn’t seem very fair compared to getting them back June 1.

“I’d love for there to be uniformity so that we can say, ‘Hey, we all start at the same time. Here we go.’ That seems fair,” TU football coach Philip Montgomery said Thursday. “But what we’re dealing with doesn’t allow you to be fair, right? That’s just part of it. Whether you like it or not, it is part of it.”

This is a textbook response for any program facing a similarly prolonged timeline.

“There’s no reason to gripe and moan because so-and-so is getting to work out right now,” Montgomery continued. “Whenever we get a chance to get back to campus and it’s safe for our student-athletes, which is the most important thing, we’re going to do that. And when we get here, we’re going to do everything we possibly can to make sure our guys get ready and we’re prepared for our chance.”

July 6 signals two months to test and/or quarantine TU athletes when they arrive, put them through a reacclimation and conditioning program, and then get into a typical preseason camp leading up to a scheduled Sept. 5 opener against Toledo.

It’s a tight but doable calendar. Would June 6 be more doable? Sure, but that isn’t the issue here.

“You don’t want to rush something and then all of a sudden a bunch of things pop up and you end up having to shut it right back down,” Montgomery said. “I think we’re being cautious that when we’re bringing student-athletes back we’re giving them the best opportunity to be in a great environment and have a chance to stay on the right side of things.”

Would the NCAA decreeing a national uniform start date level the field? Yes. But that fails to account for the regionality of the pandemic.

The country’s reopening hasn’t exactly lent itself to an “all for one” mentality. Football is no different. We can’t even get conferences to announce return-to-play policies before individual schools leak their own intentions.

As governors and mayors have announced reopening guidelines specific to their states and municipalities, so too will presidents and chancellors, in support of their trustees and regents, announce on behalf of their universities.

What works for Oklahoma might not work for Georgia, same as what works at TU might not work at OU, OSU or ORU. The pandemic is a relative phenomenon. Eventually that trickles down to the various dates football programs reunite on campus.

It can be exasperating, especially as programs begin to move at different speeds.

“I would like to have a better understanding of what exactly can I do and when can I do it and how much longer do I need to wait and what can I plan for and what’s it going to look like when I get here,” Montgomery said. “And I know all of that’s got to be flexible. We’re such goal-setting people in our industry. We’re consistently writing down, ‘This is my goal for this week. This is my goal for two weeks from now, six weeks from now, a year from now.’ And it’s difficult to set those goals when you don’t have all of the variables to go with it.

“For me to achieve Goal 1, I have to have a couple normal things happen over here. That’s been the difficult part of this for me.”

Right now the variables dictate Montgomery and the Golden Hurricane wait a while longer, even as the NCAA issues a general OK. All a coach can do is realize this is more about health and safety than competitive balance, and manage from there.

“Everybody’s going to be different, so throw all the excuses out, right?” Montgomery said. “Let’s focus on what our situation is, quit comparing ourselves to the Joneses and the Smiths and everybody else, and just focus on us.

“Let’s take care of our business and do the best we can with what we have.”

As NCAA member conferences deliberate how to approach the process, some schools have jumped ahead by declaring target dates. Louisville, for instance, announced a phased-in approach Thursday morning that allows a select number of athletes to return for coronavirus testing June 3, before starting workouts June 8.

The Golden Hurricane’s football season opener against Toledo is scheduled for Sept. 5.

Will there be football in the fall? We ask our sports writers

'Your well-being is our top priority': TU interim president addresses plans for fall in letter to students

Planned changes range from a mixture of in-person and online instruction to a mask requirement for everyone on campus.

TU athletes will return to campus no earlier than July 6