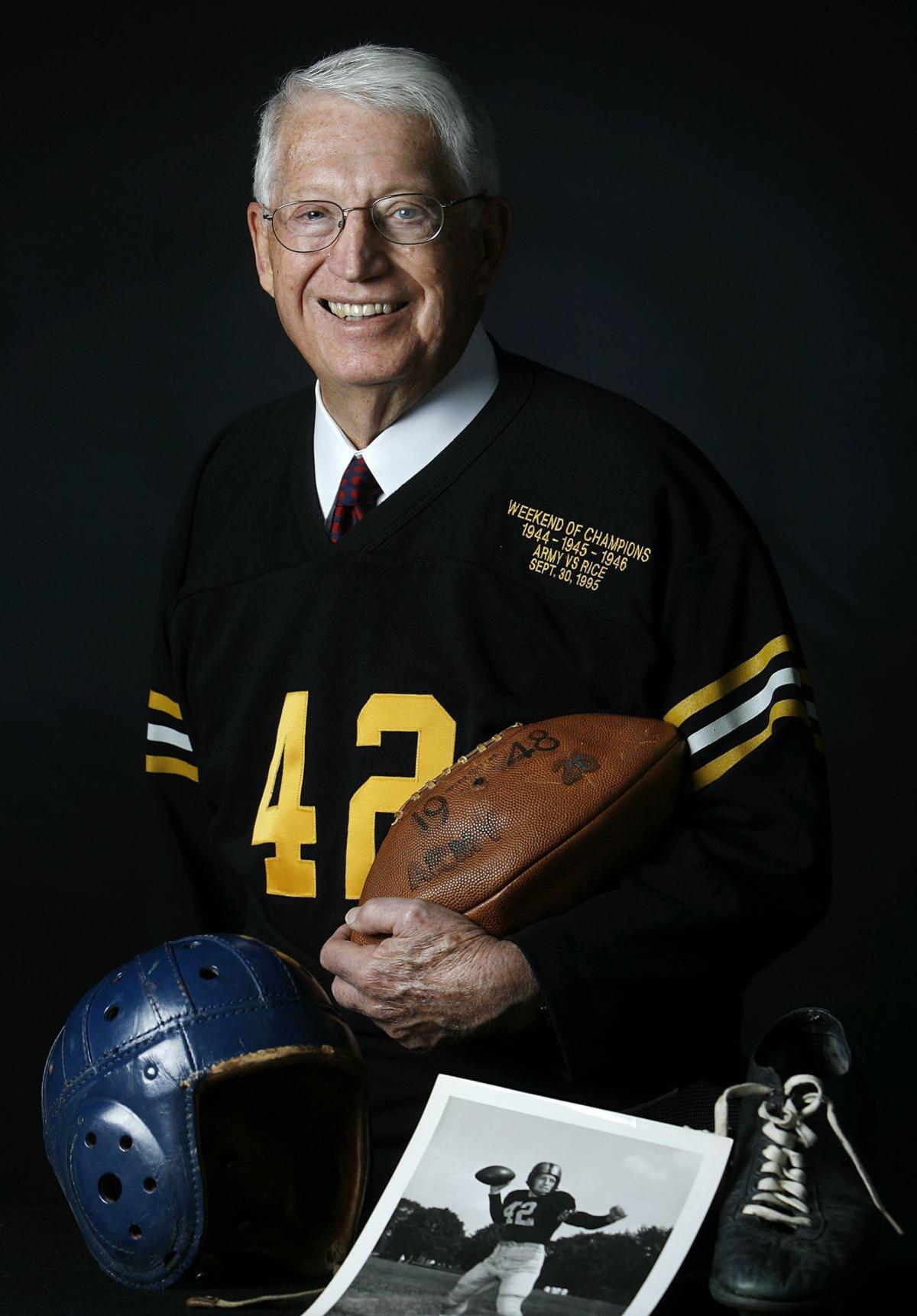 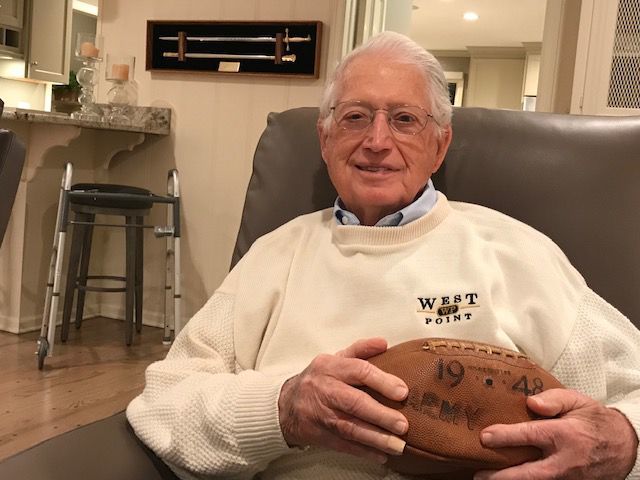 Bobby Jack Stuart, the Rogers graduate who won an Orange Bowl at Tulsa and then became an All-American at Army, enters the TPS Athletics Hall of Fame this week. GUERIN EMIG/Tulsa World

Bobby Jack Stuart, the Rogers graduate who won an Orange Bowl at Tulsa and then became an All-American at Army, enters the TPS Athletics Hall of Fame this week. GUERIN EMIG/Tulsa World

Before he won an Orange Bowl with Tulsa, shared a backfield with two Heisman Trophy winners at Army, honeymooned with Bud Wilkinson, ate spaghetti with Vince Lombardi, popped up on cartoons and in comic books, nearly made the cover of Life Magazine as a newlywed, danced with the president’s wife and became an all-time cool dad, granddad and great granddad...

Before Bobby Jack Stuart weaved all of this into his tapestry of a life, he moved from Shawnee to Tulsa, enrolled at Rogers and became one of our city’s first great high school athletes.

He remains one of our all-time running backs more than worthy of Thursday’s induction into the Tulsa Public Schools Athletics Hall of Fame.

How good were you? I asked the 93-year-old Stuart during a charming evening in his central Tulsa living room recently.

Stuart was “The Jackrabbit.” He was a talent worthy of lines like this from the Tulsa World’s Curtis Huff in 1943: “Bobby the Jackrabbit cuts like a potato peeler and once he’s in the clear runs like Man o’ War.”

“Fastest running back I ever saw,” Buddy Brothers, the assistant who recruited Stuart to join his older brother, Roy, at TU, told Huff.

“Easily the best runner I can remember in 31 years of coaching,” longtime Norman High head man Gene Corrotto once told The Oklahoman.

The three seasons before Stuart arrived, Rogers didn’t score a point against rival Central. The Jackrabbit scored 24 on the Braves in ’43. He rushed for 313 yards in the Ropers’ 27-20 win.

“I was a state track champion,” Stuart said.

There is a photo of Stuart running a 9.7-second 100-yard dash at old Skelly Field, a number as silly back then as 313. His handsome face befits that golden era, but the muscles rippling through his arms, chest and legs are 50 years ahead of their time.

To see that shot is to anticipate the scrapbook experiences that followed.

Stuart was a halfback on TU’s Orange Bowl champions of ’44. The Golden Hurricane beat Georgia Tech, quarterbacked by a fella named Frank Broyles, in Miami.

He was commissioned to attend West Point after that season. He teamed up with Doc Blanchard and Glenn Davis, college football’s famed “Mr. Inside” and “Mr. Outside,” before joining a few more legends, Chuck Bednarik and Doak Walker among them, on the 1948 All-American team.

“In those days the college all stars would form a team and play a pro team,” Bob Stuart Jr., Stuart’s son, said in the living room the other night. “Dad got to be on that team and play at Soldier Field in Chicago.”

“Life Magazine wanted to put their wedding picture on the cover,” Bob Jr. said. “They were going to do the ‘West Point man meets the local girl’ but my grandparents squashed that.”

Stuart did get the cover of True Comics in 1947. “Jackrabbit” is drawn leaving trails of smoke behind would-be tacklers and a busted track meet tape. He is “fleet-footed” like all illustrated immortals.

Stuart was splashed across the nation’s post offices and military bases, too, a poster boy for ABC and Mutual football broadcasts.

He got newsreel treatment in movie theaters, and cartoon treatment a few years later.

“Walter Lantz would come on in the middle of the Woody Woodpecker show and do a three-minute news story or whatever,” Bob Stuart Jr. said. “Once when I was a little boy, it was a video of my dad returning a touchdown 106 yards in the Army-Penn game. I start screaming to my family, ‘Get in here! Get in here!’ It was pretty cool.”

“He coached the freshman team with Vince Lombardi,” said Doug Stuart, Bobby Jack’s son. “They all lived on campus there at West Point and every Sunday night, Dad and my mom would go over to the Lombardis for an Italian dinner.”

“Real peppy,” Stuart said. “He was full of energy.”

Not as full as The Jackrabbit.

“It was a military ball,” Jody said.

“We’ve heard about it all our lives,” Doug Stuart said. “Dwight did not like to dance at all, so he was thrilled when Dad stepped in.”

Bobby Jack and Harriett settled back into civilian life in Tulsa in ’54, a big enough deal that the Tulsa Tribune let the city know with an accompanying portrait. They raised their family as Bobby Jack took over and grew JD Young.

Stuart coached his kids — Doug Stuart remembers Bart Starr and Jerry Kramer dropping by Key Elementary flag football practice once — and went to all of their games.

He went to his grandkids’ and great grandkids’ games. He told them all of the stories.

“My oldest son went to West Point and graduated in 1999,” Jody said. “On Dad’s 50th reunion it was my son’s graduation. Six weeks later it was my parents’ 50th wedding anniversary and my son’s rehearsal dinner for his wedding.

“My son gave Dad a saber from West Point to commemorate it all.”

It is framed on the wall in Stuart’s living room. An Army game ball sits high on a shelf. There is a treasure trove of newspaper clippings and photos and comics and posters and keepsakes around, too.

Over in the recliner rests The Jackrabbit, another honor beckoning, another page in his remarkable story about to turn.

A reception will start at 5:30 p.m. Tickets for the banquet are $100 per plate or $1,000 per table. Corporate sponsorships also are available.

Reservations for tables or individual seating may be made by contacting Lisa Norman in the TPS Athletics Department at 918-746-6453.