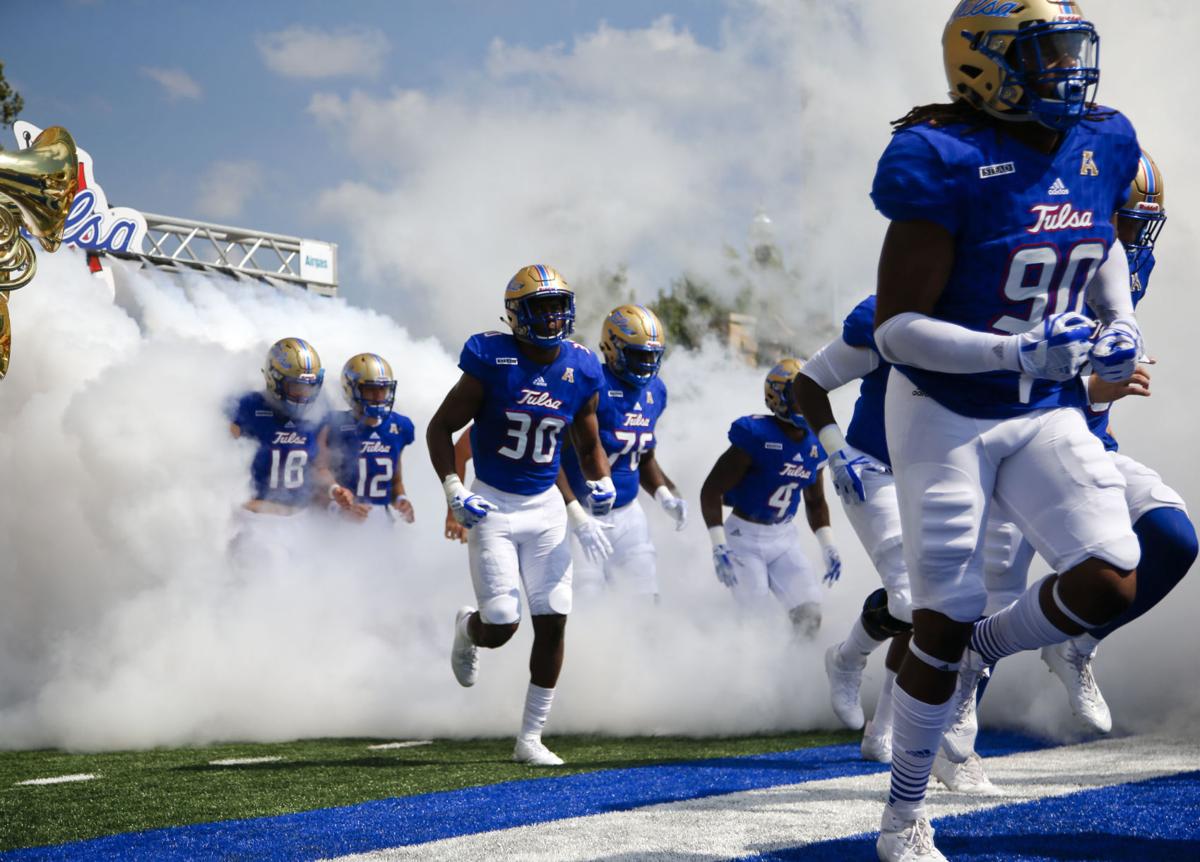 The University of Tulsa football team runs onto the field at the start of the Golden Hurricane’s 2017 game against New Mexico at H.A. Chapman Stadium. Tulsa World file 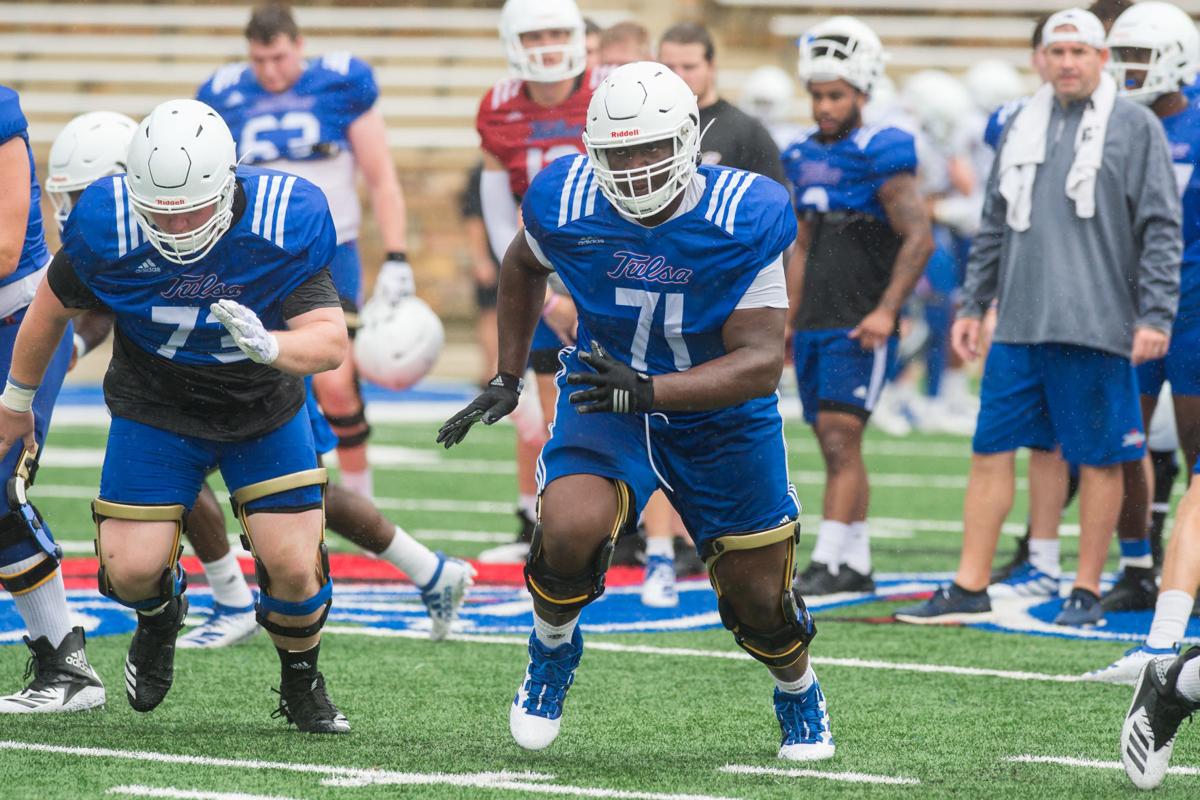 Tulsa offensive lineman Chris Paul (right), seen here in an Aug. 3, 2019 practice at H.A. Chapman Stadium, sat down with Golden Hurricane coach Philip Montgomery in a video where the two discussed what it means to be Black in America. BRETT ROJO/for the Tulsa World, file

The University of Tulsa football team runs onto the field at the start of the Golden Hurricane’s 2017 game against New Mexico at H.A. Chapman Stadium. Tulsa World file

Tulsa offensive lineman Chris Paul (right), seen here in an Aug. 3, 2019 practice at H.A. Chapman Stadium, sat down with Golden Hurricane coach Philip Montgomery in a video where the two discussed what it means to be Black in America. BRETT ROJO/for the Tulsa World, file

Chris Paul, an African-American offensive lineman for the Tulsa football team, and Philip Montgomery, TU’s white head coach, sat face to face and answered one of our most urgent questions right now.

What does it mean to be Black in America?

Said Paul, “Being Black in America is feeling like you have to bend over backwards to make other individuals feel comfortable. It’s 10 times harder to achieve certain things, but at the same token feeling like people are wanting to give you certain things and that you couldn’t achieve it on your own merit … Being Black in America is being pulled over five times in one week by the Jersey Village (Texas, Paul’s home town) police department.”

The exchange was just what current TU football player Corey Taylor and former Golden Hurricane Avery Gragg had in mind when they felt the sharp edge of the country’s racial tipping point and devised a spectacular idea to address it.

“I was headed to a workout with Avery,” Taylor said. “I began to think about all the different conversations I would like to have with my peers, some of my really good friends who I’ve known forever, that we haven’t had yet. I wanted to create a platform that allowed room for those conversations to take place.”

The result was six one-on-one conversations between people of different races on topics that were uncomfortable and indispensable, ranging from police experiences to the freedom to speak out and support after that occurs.

The finished product was a 12-minute, 52-second video entitled “Conversations That Matter.” It is a brilliant example of sports’ role in our country’s movement toward social justice, and a platform model that teams, schools, businesses and families would be wise to follow.

“Do you feel like because you’re Black you’ve got that target on your back?” Boomer, TU’s white quarterback, asked Johnson, an African-American receiver. “I honestly want to know.”

“I mean, I feel like that everywhere I go,” Johnson answered. “That’s just being Black in America, I feel like.”

“It’s hard for us as white people to understand what minorities go through,” Boomer told the Tulsa World after TU promoted the video last week. “You didn’t really realize it until, unfortunately, all of this went down. And it’s tough. Sometimes you’ve got to go through stuff to get somewhere. That’s what we’re doing right now as a country.”

Mossman, who is white, sat face-to-face with Washington, TU’s African-American guard. The two addressed their distinct impressions of police.

Said Washington: “My heart drops anytime I’m in that situation. I remember being pulled over and wondering if I should get my registration out before the cop came because when he asked me, I didn’t want to be reaching for something and be misinterpreted.”

It is remarkable to see a player open up to a coach like that.

“I always kept in mind certain experiences I’ve been through,” Paul told the Tulsa World about his sit-down with Montgomery. “But, no, as for conversations pertaining to this topic with coaches, I would say there are very few that I’ve been able to have.”

Imagine the blossoming of the player-coach relationship that can and should result.

“Our job in this is to actually listen,” Montgomery said. “Open up your ears, open up your heart, open up your soul and listen and pay attention and learn from each other. The experiences that Chris has had opens your eyes at some of the things that have occurred, can occur. It’s those things that maybe you and I ...

These were words in TU’s video, and we all understand the need for words to become actions to see racial and social justice through. And yet words carry unique impact when exchanged in mind-opening conversations like these.

If TU’s conversations spark others?

“You can actually start a movement,” Paul said, “and put certain concerns into actual actions.”

Will what the Golden Hurricane did here serve as a model?

“I’m hoping that happens,” Boomer said. “I really do.”

Even if it doesn’t catch fire, Taylor and Gragg’s idea is no less extraordinary. The execution of their vision is no less exceptional.

“We’re not experts on social injustices,” Gragg said, “but we are experts on our experiences.”

Fletcher sat with Carter, a white associate AD, and addressed the challenge of his being an African-American coach.

“Although I love it and there’s a lot of creativity involved in it, I do know that opportunities are few and far between,” he said. “I have the stress of having to be perfect.”

“Not just the very best,” Fletcher said. “I have to be exceptional. And I have to remain that, as well.”

“So that you’re not questioned,” Carter said, “and things like that.”

“So I can continue to hold (my) own in those aspects,” Fletcher said.

“I hadn’t thought of it that way before,” Carter said.

“It’s going to be uncomfortable, but it will definitely be worth it,” Taylor said. “We saw so much relief at the end of each conversation. People felt unburdened. People felt heard. People felt like they gained a new level of understanding and empathy.

“Coach Fletcher says it in a longer version, how empathy leads to advocacy and advocacy leads to action. That’s what we hoped people would get from the video.”

Take a bow, young man, for showing people the way.