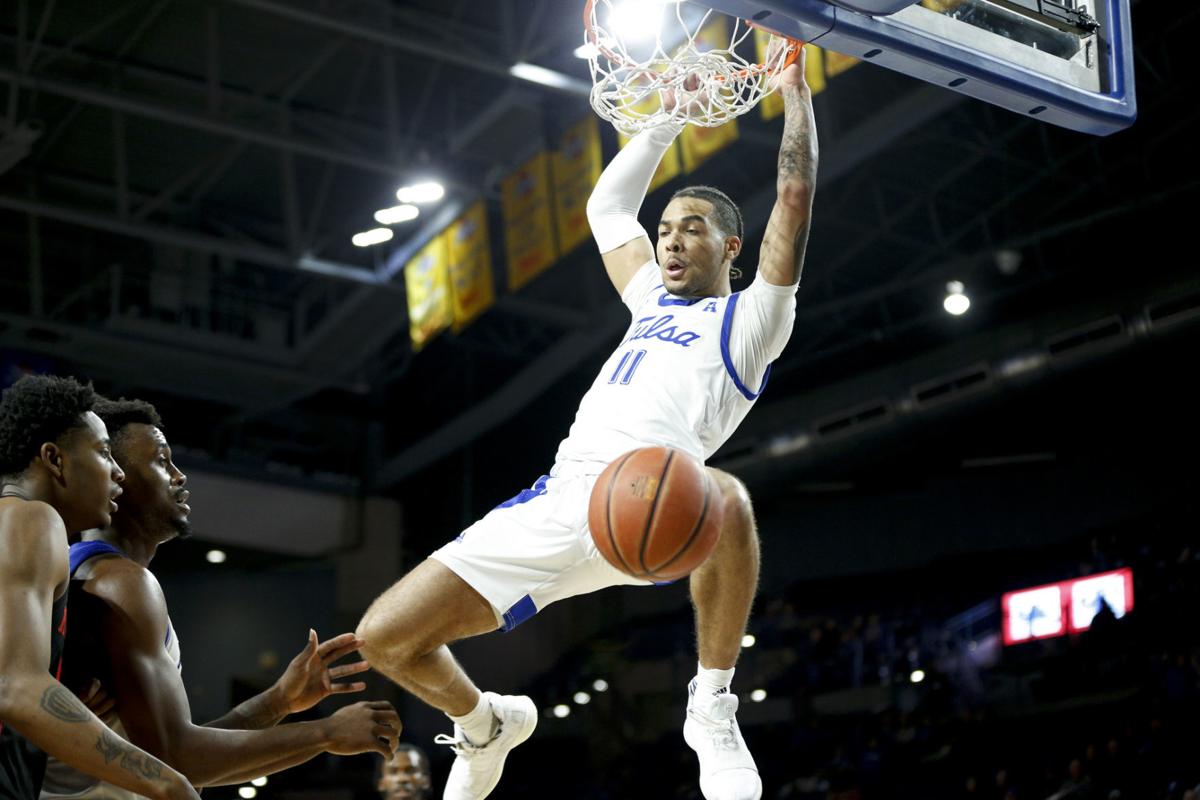 Tulsa’s Darien Jackson throws down a two-handed dunk during the Golden Hurricane’s win over Houston at the Reynolds Center on Saturday. Jackson was 0-for-20 from 3-point range coming in, but he was 3-for-7 against the Cougars and scored 19 points to spark TU’s rally. IAN MAULE/Tulsa World 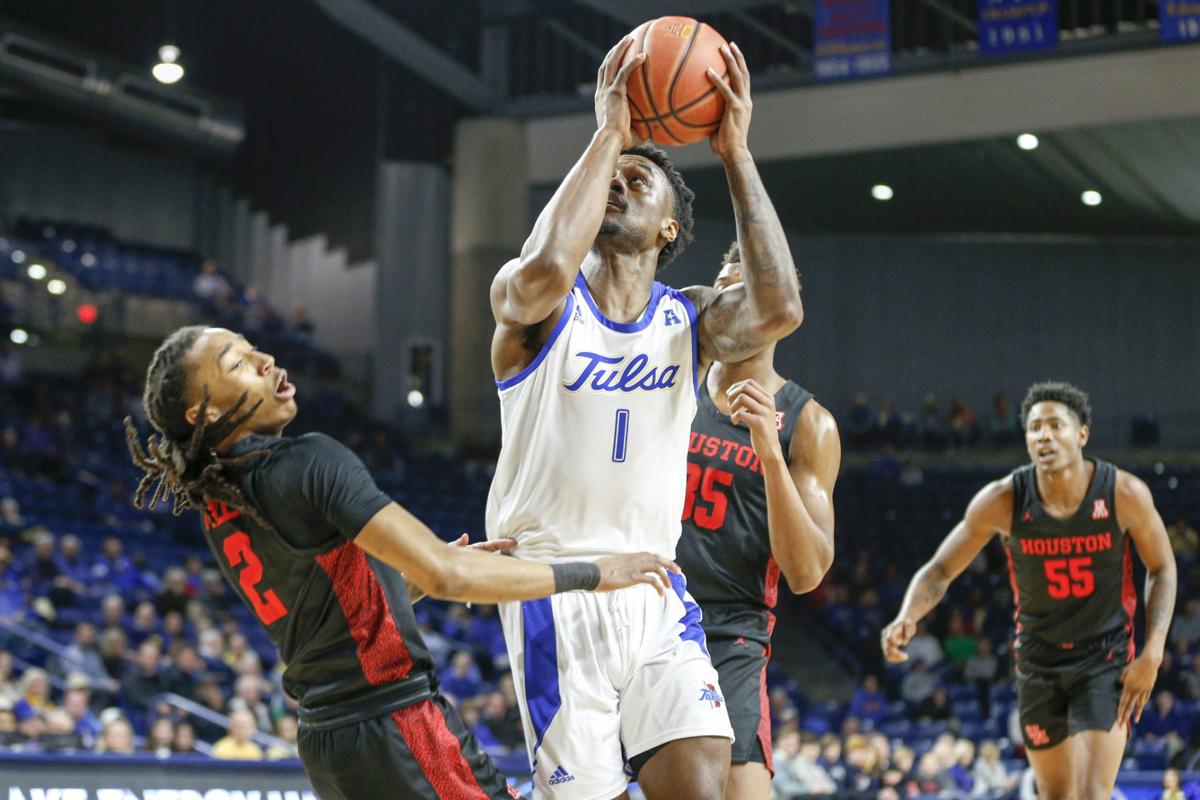 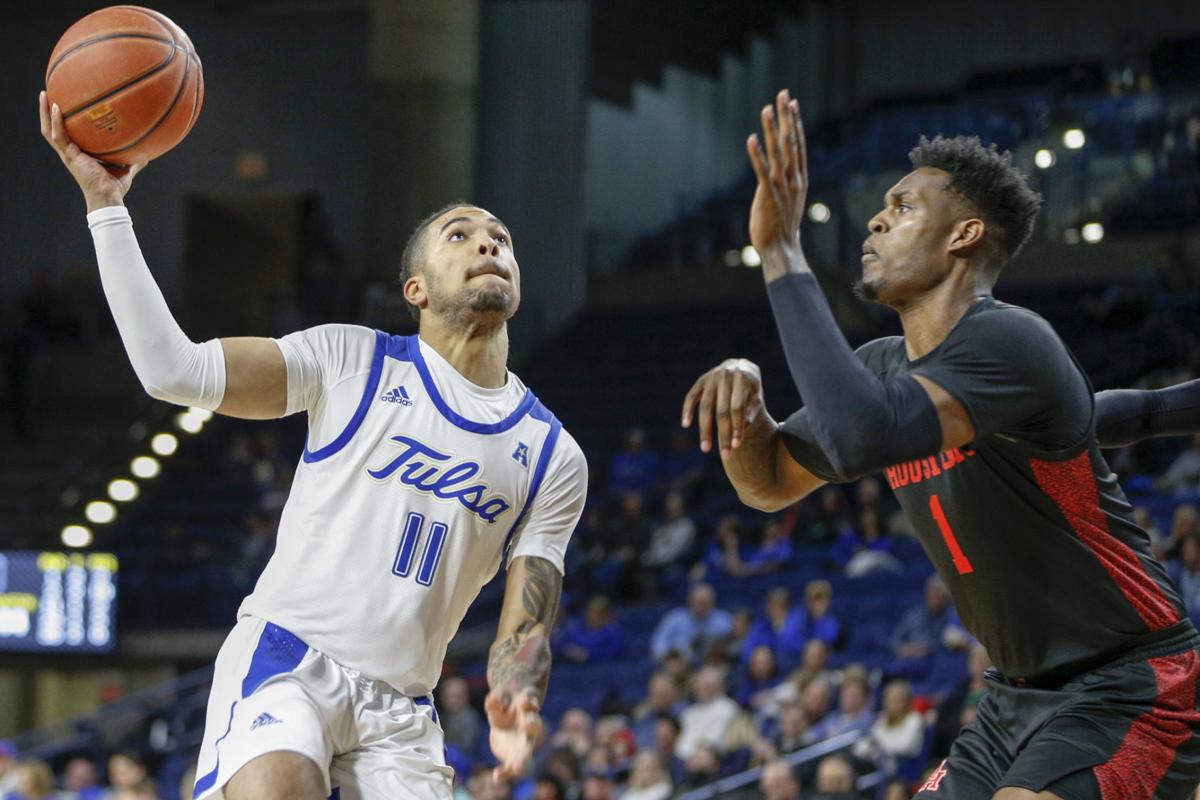 Tulsa guard Darien Jackson (left) goes up for a shot while being defended by Houston center Chris Harris Jr. Saturday

Tulsa’s Darien Jackson throws down a two-handed dunk during the Golden Hurricane’s win over Houston at the Reynolds Center on Saturday. Jackson was 0-for-20 from 3-point range coming in, but he was 3-for-7 against the Cougars and scored 19 points to spark TU’s rally. IAN MAULE/Tulsa World

Tulsa guard Darien Jackson (left) goes up for a shot while being defended by Houston center Chris Harris Jr. Saturday

When it comes to the University of Tulsa, the American Athletic Conference and all of college basketball this season, fans probably should expect the unexpected.

The Hurricane continued its wildly unpredictable start to league play Saturday, following a blowout win against Temple and a blowout loss at Cincinnati with a gritty 63-61 victory against a Houston team favored by many to win the conference.

“You’ve got to stay even-keeled,” coach Frank Haith said. “You can never get too high or too low. I think the team that handles those emotions the best is the team that can have the most success in this league.”

Before breaking a tiebreaker in a series that saw the Cougars prevail in the previous five meetings, TU trailed by five in the final two minutes, having committed untimely turnovers and surrendered 11 offensive rebounds in the second half.

Down but not out, the Hurricane relied on a late 3-pointer from Darien Jackson as part of a career-best outing and four clutch free throws from Brandon Rachal in a 35-second span to go up two in the final minute.

“We felt like we had something to prove coming off our last loss and we wanted to show the world that we are capable of winning big games like this,” Jackson said.

Defense paved the way, preventing the Cougars from making a shot in the last five minutes and forcing three turnovers in that span. Houston standout Caleb Mills stepped on the end line when launching a corner 3 with 23 seconds to go, and teammate Marcus Sasser was off the mark on a last-second 3 after TU’s Elijah Joiner missed the front end of a one-and-one.

“When you’re on the road, you just can’t make the mistakes we made,” Houston coach Kelvin Sampson said. “At the end of the day, we just made too many mistakes. We didn’t deserve to win that game.”

The Hurricane (10-6, 2-1) trailed by as many as eight early in the second half. That deficit was cut in half when Jackson sank the first 3-pointer of his career after 20 consecutive misses, and he was fouled and made the ensuing free throw.

During a crucial 10-0 run to go up 44-42, Jackson hit another 3 a minute later before the one late in the game. He finished with 19 points, leading TU in scoring for the first time in his career.

“I told him at one time, ‘You make too many 3s in practice not to shoot them (in games),’ ” Haith said. “Obviously he made three 3s, but he made some other plays where he was cutting without the basketball and getting behind the defense. He had some great finishes.”

Houston (12-4, 2-1) entered with the game plan to put an extra man on forward Martins Igbanu in the post, allowing Jackson open looks from long range. He missed two in the first half before heating up.

“We didn’t count on him beating us from 3 today,” Sampson said. “It’s been a while since he’s made a 3. He hasn’t made one all year. We looked at last year (and saw the same).”

Perhaps the most encouraging outcome for TU was the response from the lopsided result three days earlier. After falling behind Saturday, the Hurricane continued to run its offense and relied on its defense to prompt the comeback.

“I thought when we got down late in the game, we didn’t panic,” Haith said. “I thought our guys bowed their backs and they didn’t fret. You’ve got to give them credit.”