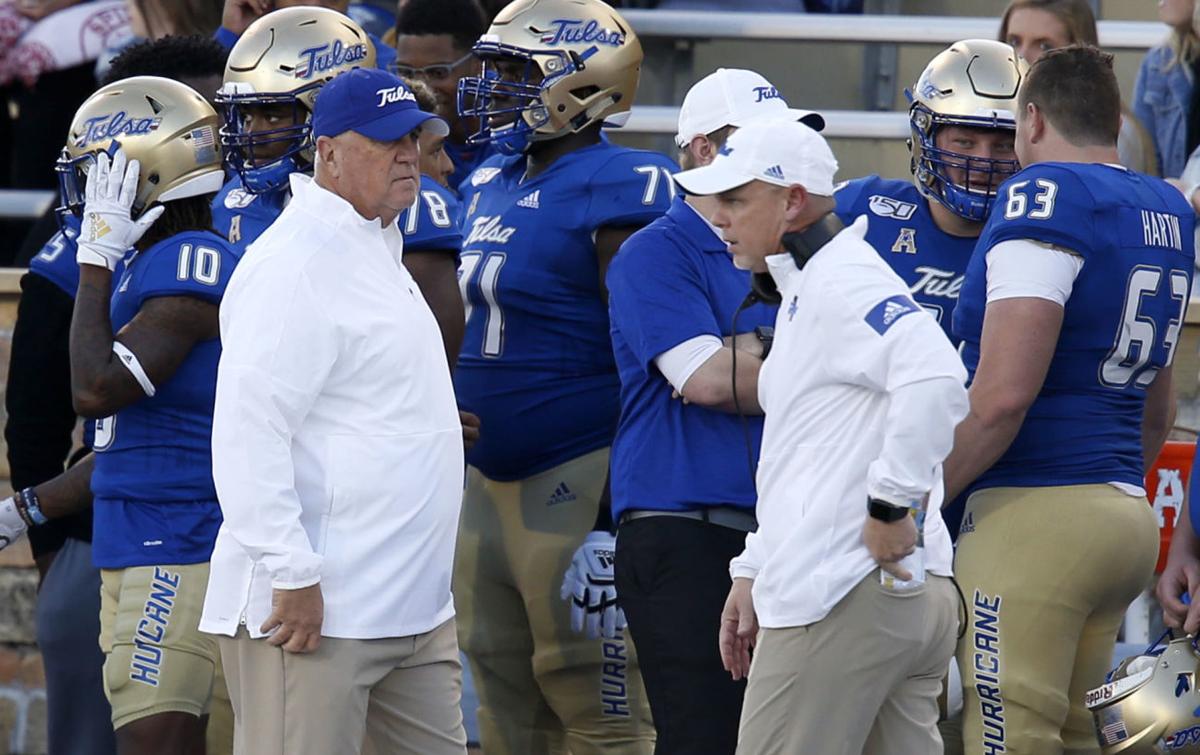 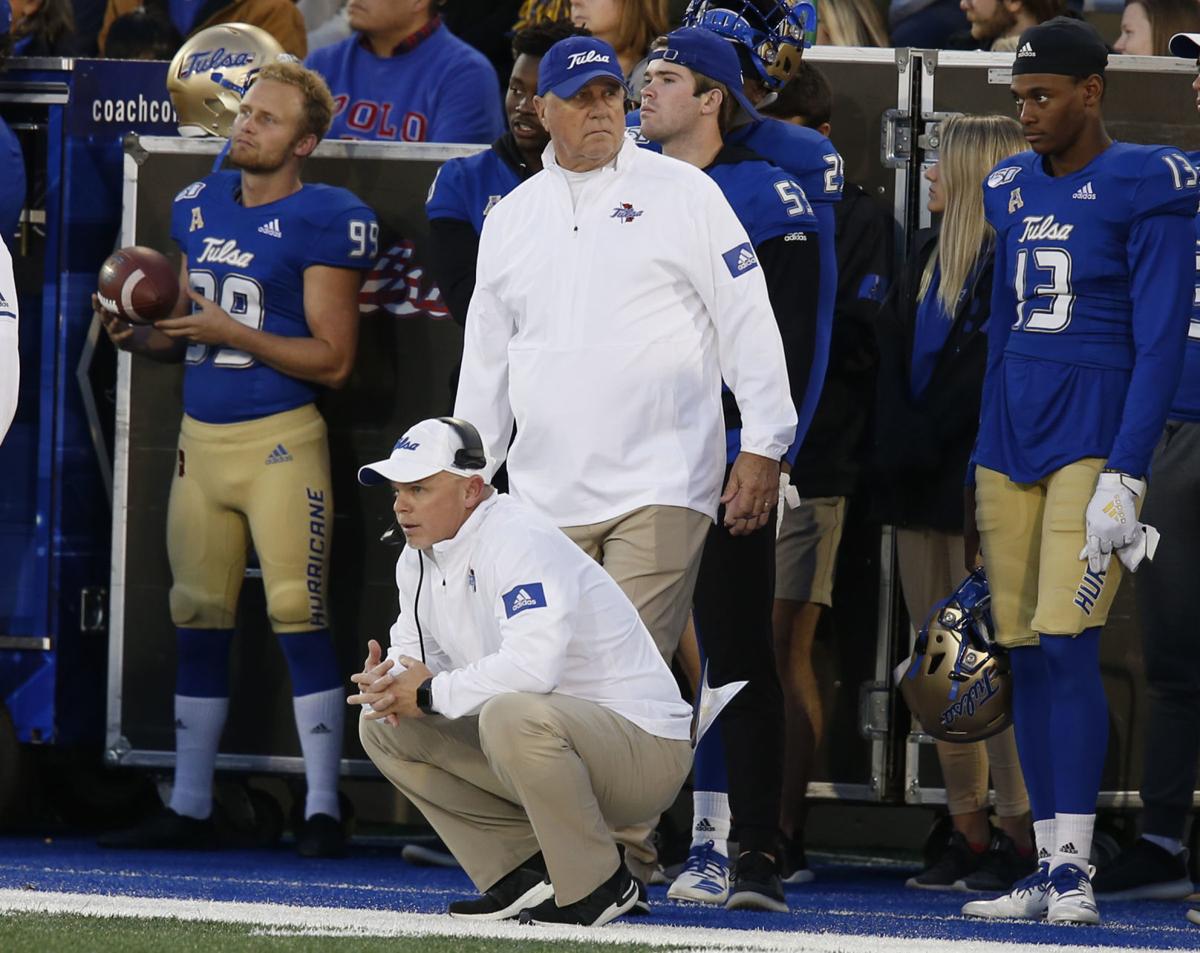 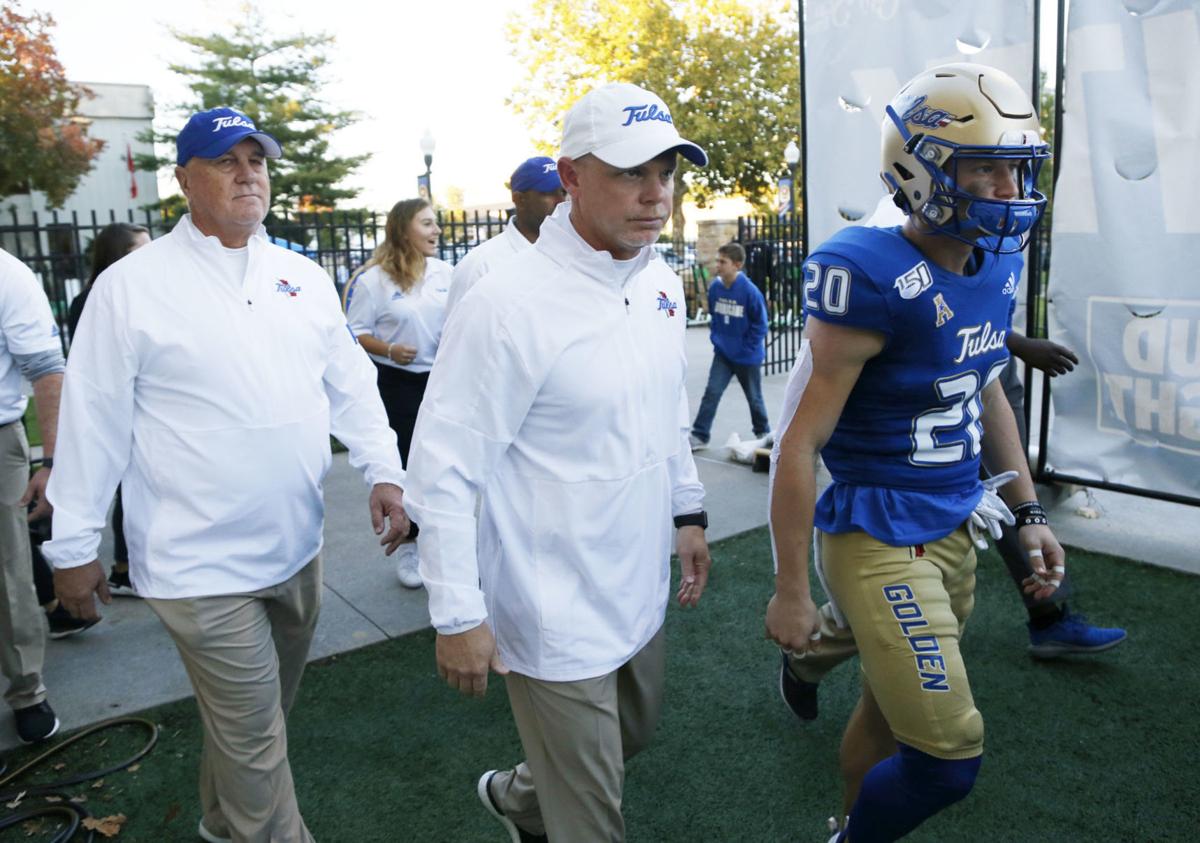 Joe Timmons (left), the longtime security detail for University of Tulsa head football coaches, walks into the stadium with head coach Philip Montgomery and Cannon Montgomery before the game against Memphis on Oct. 26. STEPHEN PINGRY/Tulsa World

Joe Timmons (left), the longtime security detail for University of Tulsa head football coaches, walks into the stadium with head coach Philip Montgomery and Cannon Montgomery before the game against Memphis on Oct. 26. STEPHEN PINGRY/Tulsa World

Steve Kragthorpe was furious about an off-field issue and let his University of Tulsa football team know before the 2006 Armed Forces Bowl.

He picked up a chair and threw it through a projection screen to get his point across in front of stunned players.

Joe Timmons, who led Kragthorpe’s security detail, followed the coach as he stormed out of the silent conference room. Timmons knew this was uncharacteristic for the even-keeled coach and he didn’t know what to expect when the pair reached the hallway.

“Steve had a smirk and then just started laughing,” Timmons said. “He said, ‘I didn’t mean to do that.’”

“He does a great job at what he does and taking care of us when we’re on the road from a security standpoint, and does it out of the goodness of his heart,” said Montgomery, who said Timmons was one of the first people he met after taking the job in 2015. “He’s not looking for anything special. Just a guy that has always been involved in our program, whether it’s football, basketball, whatever that might be, and he does a great job of it.”

Timmons sets up team travel and schedules police escorts and also helps his counterparts from other schools as a liaison. He has nine bowl rings and plenty of memorabilia representing his past 15 years on the job.

Timmons has been in law enforcement nearly four decades. He took the job at TU after spending 20 years with the Phoenix Police Department. The city of Tulsa always was close to him. Growing up, he lived here with his grandmother when his father, who was in the Navy, was stationed far away.

His goal was to start a lawn service in Tulsa upon his retirement from the Phoenix Police Department, but then he saw that a job at TU had opened up. After getting the job, he fell in love with the campus and students.

He said he has seen the football coaches at their best and at their worst.

“Joe was usually the last face I saw when I would leave campus after a game,” Blankenship said. “Either we were fist pumping on the way out or he was just being quiet and waiting to see how we were going to respond. I think the losses hurt him every bit as much as they did me.”

During the Graham (2007-10) and Blankenship tenures (2011-14), the team position groups ate dinner together. When the transition of coaches happened, Timmons asked if Blankenship if he could continue to eat with the special-teams group.

“He became the guardian of the specialists table and they loved him,” Blankenship said. “That was the one thing he asked me not to change. And I’m, like, ‘How cool is that?’ He just loved those relationships.”

Timmons was a confidante to the coaches. He heard conversations that — to this day — he will never repeat. He has the full trust of all of the coaches.

“I had 100% confidence and trust in Joe,” Kragthorpe said. “I knew that if I had said something to Joe, it wasn’t going anywhere. We had that type of relationship.

“When you are in that position (as a coach), you are making yourself very vulnerable in all these situations and he sees everything. He was in media situations, player meetings and team meetings. He had a lot of access to our program and he was a steel trap.”

Timmons won’t say which coach is his favorite. He said he has created a special bond with all.

“There’s a lot of behind-the-scenes private conversations that happen in the locker room. A lot of times it’s just venting and I understand that. That’s just all part of the heat of battle,” Timmons said. “I think that there has to be that confidentiality that occurs there and a lot of times I’m just a sounding board for them.”

Timmons’ first season was 2005, when the Hurricane won the Conference USA championship and then the Liberty Bowl. Timmons said that was his favorite season with TU, but Kragthorpe said he never felt how much Timmons was enjoying the ride.

“Joe was so professional that he would never let on that he was having a good time, but I think he did let his hair down a little bit (at the end),” Kragthorpe said.

Of Kragthorpe, Timmons said, “He’s a funny guy. I’m up and down the sideline with him and it was just the way he worked officials. That was just magic. It just kept me in stitches the whole time.”

Graham was perhaps Timmons’ most emotional coach. Timmons said Graham would tell stories about his former boss, Rich Rodriguez, and how the former West Virginia coach was a very hot competitor and a speak-your-mind type of guy.

Timmons almost quit his role with TU football after the 2010 season. The travel was wearing on him. He shared that with Blankenship during the week of the Hawaii Bowl.

A month later, Blankenship was named head coach and asked Timmons two words: “You in?” Timmons’ answer was, “Definitely.”

“Bill was probably the most poised coach that I’ve been around,” Timmons said. “And the few times I did see him kind of get fired up, you knew there was something there. Bill was just a class act.”

On Saturday, Timmons will take the field with Montgomery for the 61st time when TU faces Houston. It’s the longest relationship he has had with a Hurricane coach.

“I love Philip and love the family to death,” Timmons said. “He’s probably more of a blue-collar coach. He’s very motivated toward the players and the kids.”

And then he laughs while describing post-game celebrations: “I would say coach Monty is probably the best dancer out of all four coaches.”

Timmons doesn’t know how long he will stay in the job. Retirement could come at any time. But he is still having fun.

“When you are around players and their enthusiasm and you see them running around, it keeps you feeling pretty young,” Timmons said.