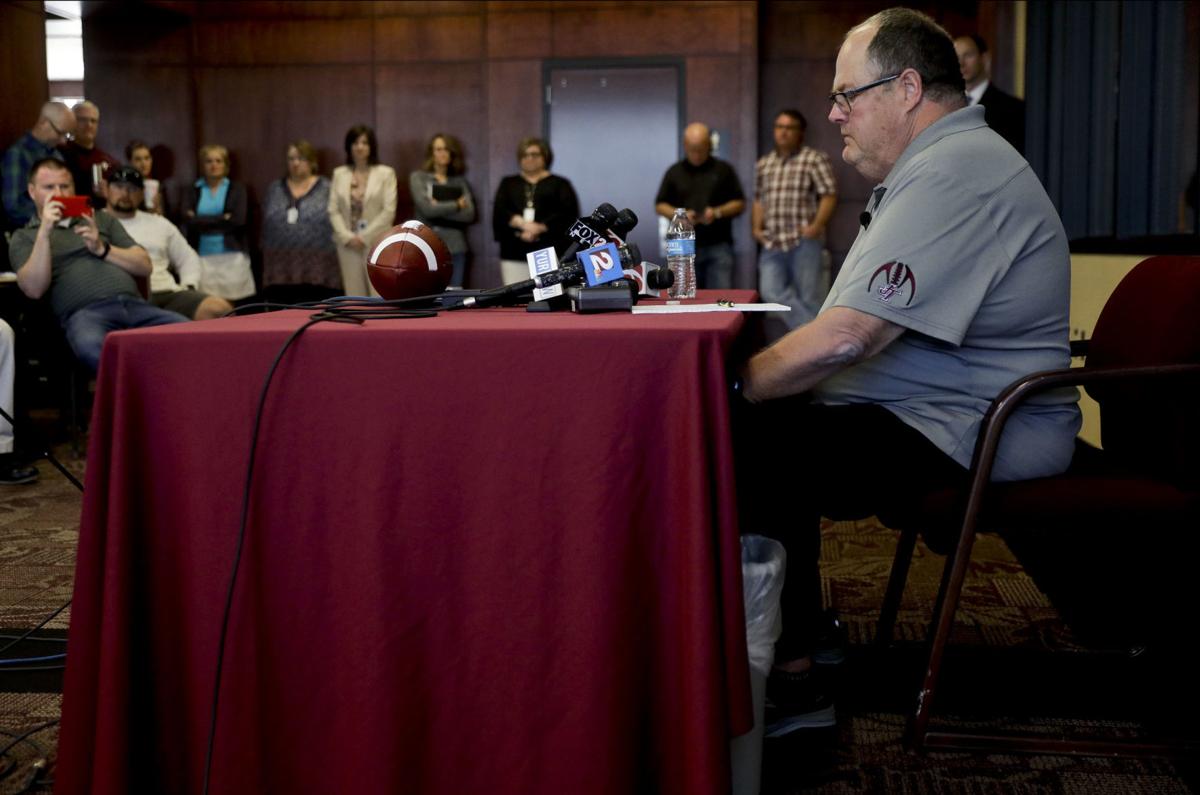 Allan Trimble announces his retirement during a news conference at the school April 12, 2018. MIKE SIMONS/Tulsa World 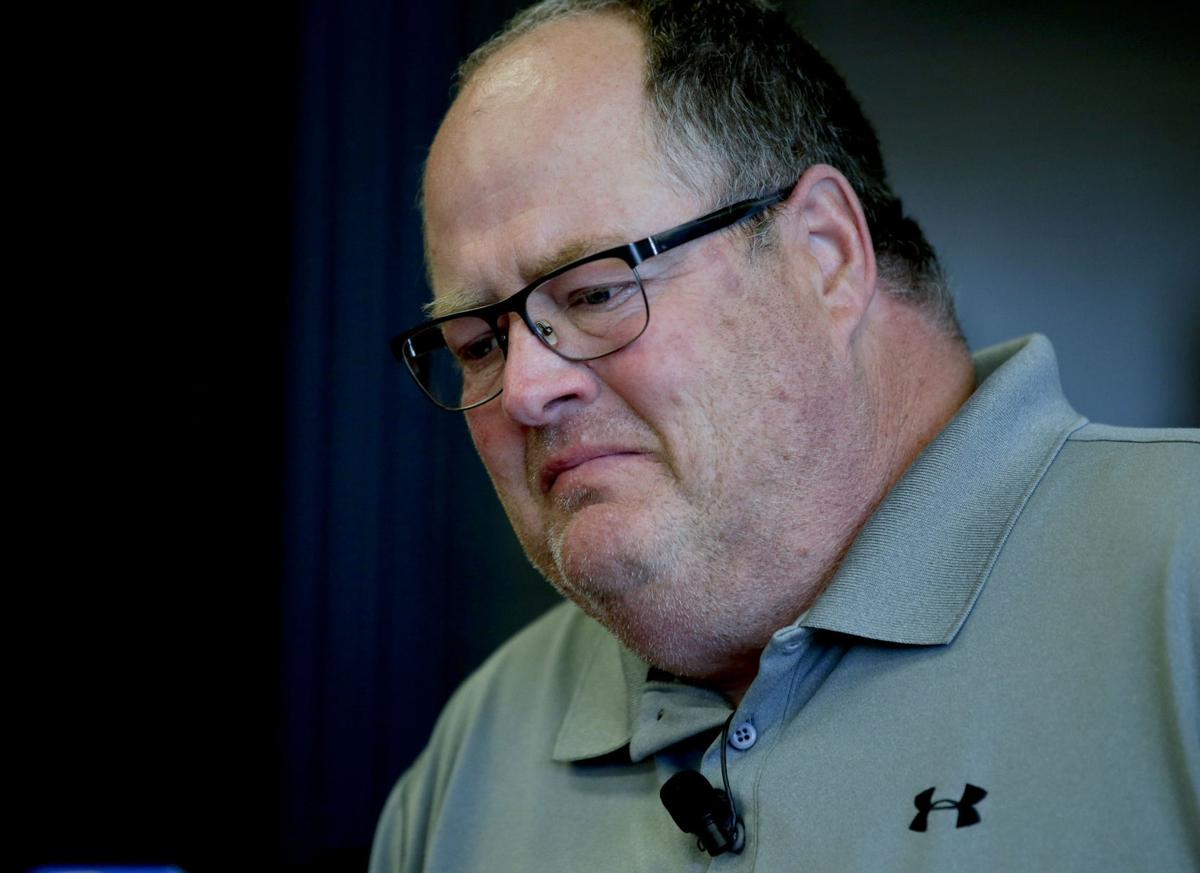 Allan Trimble chokes up while announcing his retirement during a news conference at the school April 12, 2018. MIKE SIMONS/Tulsa World 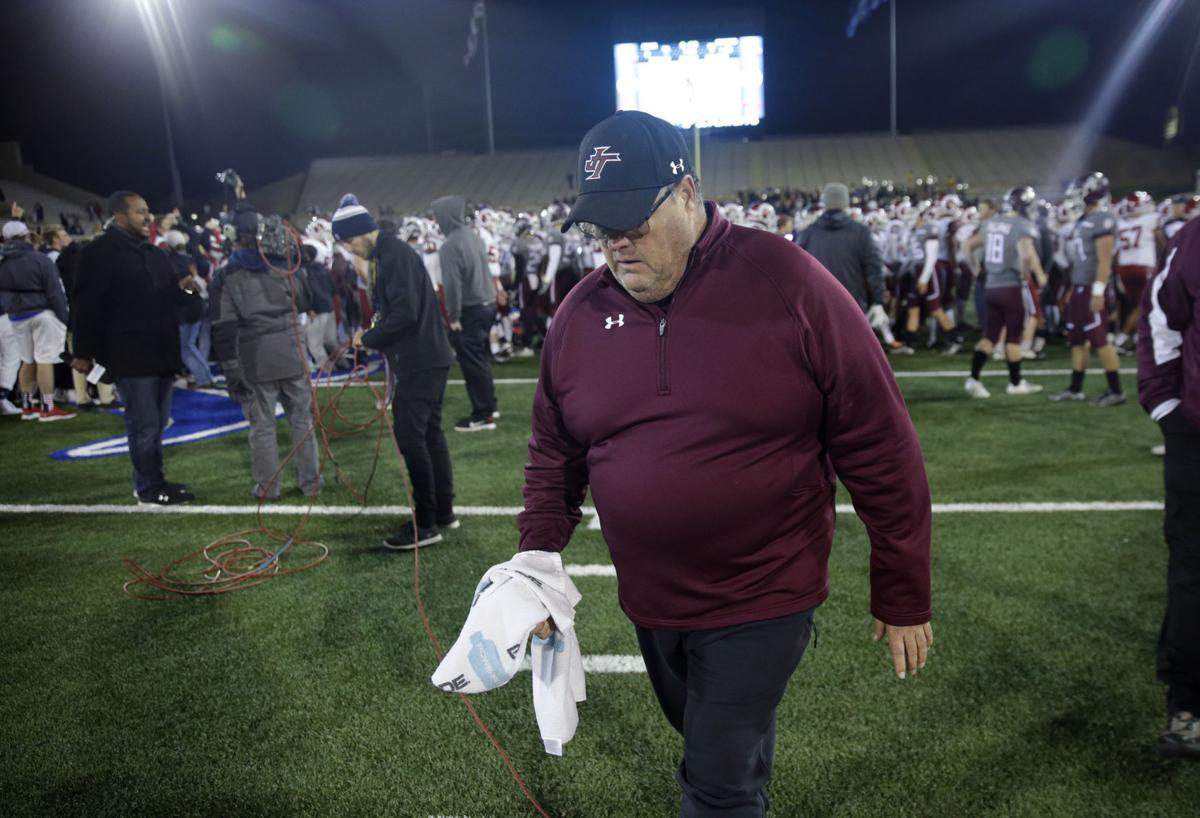 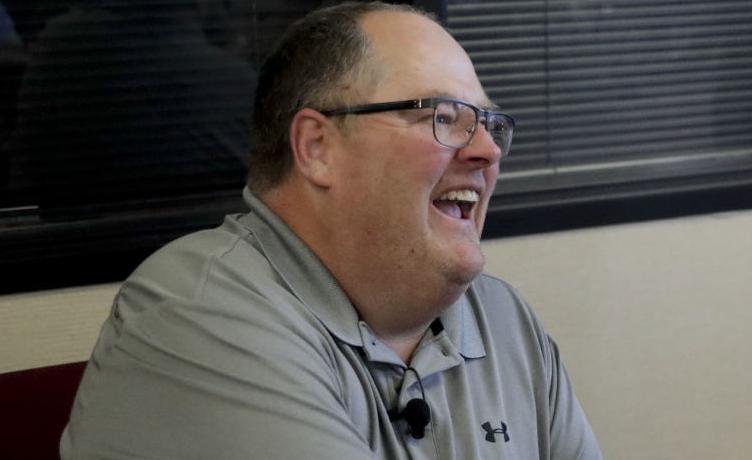 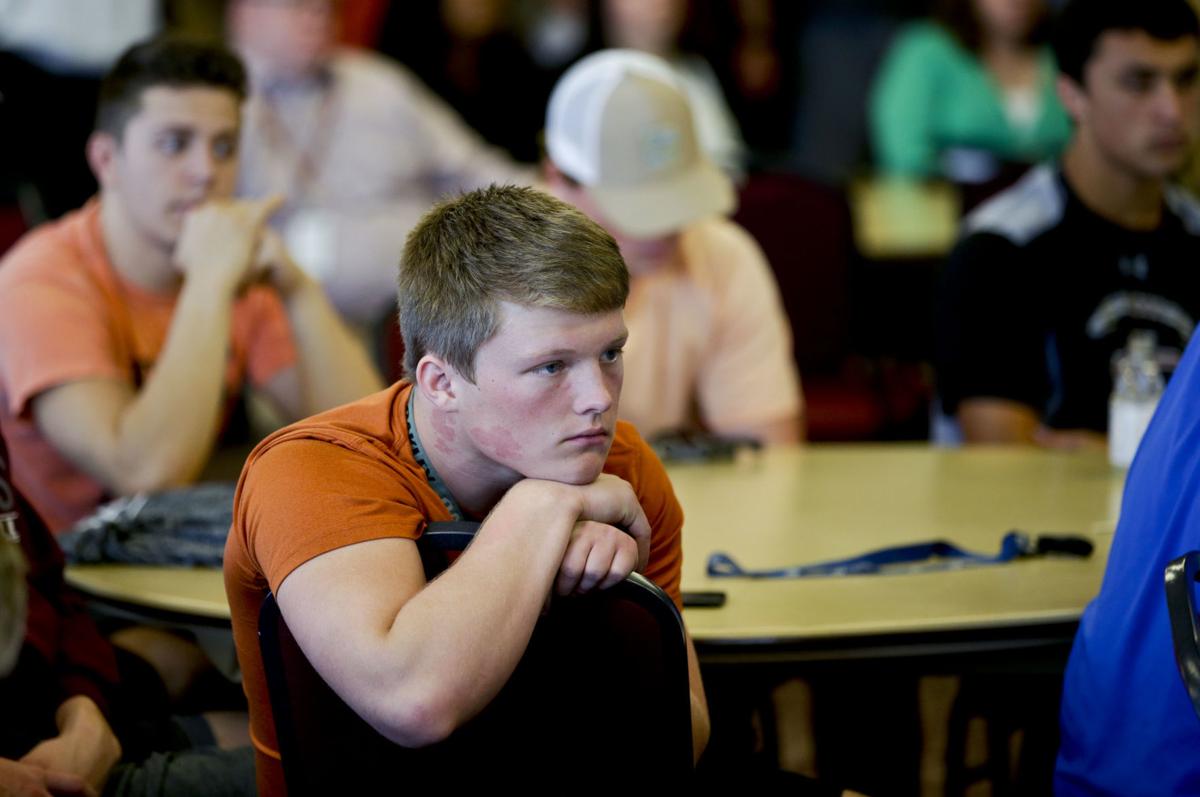 Football player Will Cox listens to Allan Trimble announce his retirement during a news conference at the school April 12, 2018. MIKE SIMONS/Tulsa World 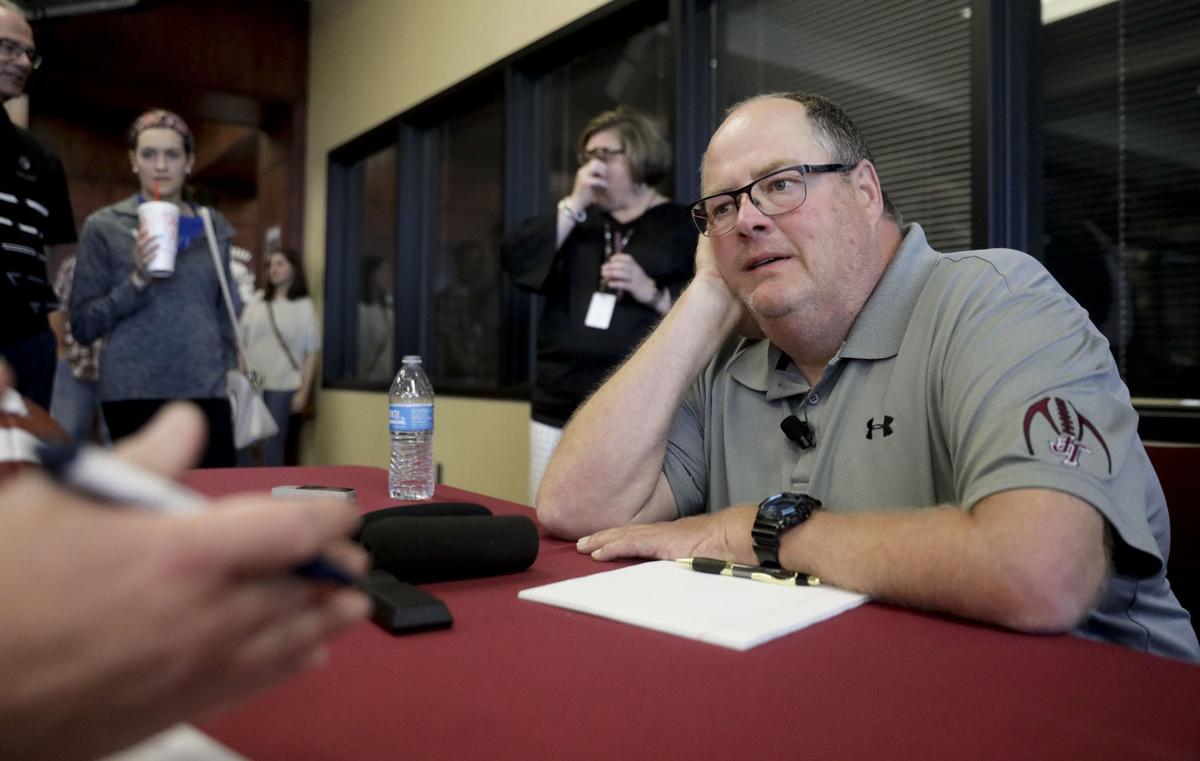 Allan Trimble announces his retirement during a news conference at the school April 12, 2018. MIKE SIMONS/Tulsa World

Allan Trimble chokes up while announcing his retirement during a news conference at the school April 12, 2018. MIKE SIMONS/Tulsa World

Football player Will Cox listens to Allan Trimble announce his retirement during a news conference at the school April 12, 2018. MIKE SIMONS/Tulsa World

Guerin Emig: One of the biggest reasons for Allan Trimble's success was also one of his biggest challenges

Photo gallery: A look at Allan Trimble through the years

Allan Trimble by the numbers and through the years

What they're saying about Allan Trimble

JENKS — Allan Trimble, who has won more state high school football championships for Jenks than any head coach in Oklahoma history, was at times funny, self-deprecating and, as expected, emotional during his retirement news conference Thursday at Sharp Center.

What Trimble called “a challenging day” came just three days past the 22nd anniversary of him being named head coach on April 9, 1996. Since then, he led the Trojans to 13 state titles.

“It’s a difficult thing,” Trimble said. “I told our players yesterday, I think I started playing football back in 1976, that’s a long time ago. I don’t think I’ve ever missed a season. I’ve either played or coached or something since probably the seventh grade. So to take a step and walk away from what that looks like, it’s a tough one. I have to balance that with what is best for the football program here at Jenks.”

Trimble will still be in charge of the program until a new coach is named or until his retirement becomes effective June 30.

“It’s been a blessing not only being his colleague, but a close friend during my 16 years here,” Jenks athletic director Tony Dillingham said. “To be able to watch the way he works with young people and coaches and mentors them, and to see those guys leave this tree and become coaches at others places, that’s been incredible to see during my tenure.

“It will be a little bit surreal to not see him coaching, for me he’s been an institution as long as I’ve been here.”

Trimble, 54, will retire as head coach and director of football almost two years after he was diagnosed with Amyotrophic Lateral Sclerosis — also known as Lou Gehrig’s Disease, which he described as “very unforgiving … you get tired.”

“On my greatest day, I was not very athletic. But, now, I am not very athletic,” Trimble said. “I can’t get around very good. This program deserves someone who can go full speed. That balance has been the tricky part for me.

“What makes it tough is I’ve got coaches who have carried the load for me for a couple years, and I’m forever indebted to that. We have great men who are great people for our kids. I don’t want to leave that. I don’t know anything else I would do. But I think in my heart that it’s time to get some new air in the sails, to put a man in my position that can physically and emotionally grind it out. So that’s kind of what I based my decision on.”

His plans include focusing on the Trimble Strong Foundation, “probably something that I’m most excited about.” The foundation helps people locally as well as outside the area such as sponsoring a school in Honduras and working at a church in New Orleans.

“It also selfishly allows me a chance to do what I’ve always done, work with people, work with kids, but maybe identify some different targets along the way,” Trimble said. “Retirement is going to allow me to go about it at a little different pace, which is the key. The disease is pretty unmerciful.”

Trimble would consider helping the Jenks program in some capacity if asked by the new coach.

Trimble retires with a 242-41 overall record and his teams made 17 state finals appearances in 22 seasons at Jenks’ helm. The Trojans only missed reaching the semifinals of the state’s largest classification twice under him, losing earlier in the playoffs on each occasion.

Jenks, after an 0-4 start in the 2017 season, bounced back to win its 16th district title under Trimble and finished 7-5 with a loss to Class 6AI state champion Owasso in the semifinals.

The past two seasons after the diagnosis were “a lot different” for Trimble.

“I probably didn’t worry as much about the scoreboard,” Trimble said. “Don’t get me wrong, I like to win. But when you know that the end of your path is getting a little bit closer, I think you savor things a little bit more. When I say things, you enjoy your time with your players more. Your coaching staff meetings are more than just Xs and Os. So yeah, you savor that. You savor that.”

Describing his emotions about retiring, Trimble said “I would be foolish to be sad. Sentimental? Yeah, pretty sentimental. (Coaching at Jenks) it’s been such a blessing.”

After starting his career as Owasso’s linebackers coach in 1987, Trimble moved to Jenks as an assistant in 1990 and was named offensive coordinator in 1993, helping the Trojans win a state title that season. He led the Trojans to Class 6A state titles in his first six seasons at the helm.

In January, Trimble received the 2017 Power of Influence Award during the American Football Coaches Association Convention in Charlotte. This year, he will be inducted into the Oklahoma Sports Hall of Fame.

In 2016, Trimble was one of two winners of U.S. Cellular’s nationwide first Most Valuable Coach award. Four times he has been named as the Tulsa World’s state coach of the year.

“The legacy Allan Trimble is leaving stretches far beyond the football field,” Jenks Public Schools superintendent Stacey Butterfield said in a news release. “Although his name will always be associated with winning, his most important work was done by positively impacting the lives of his players and setting an incredible example of humility, courage and perseverance. He has been an inspiration to our entire community, and the number of lives he has touched with his kindness and generosity is simply remarkable.”

Gallery: Allan Trimble memorial service and a look back at his Jenks football career

The Mabee Center is as much a church as it is a basketball venue, and on Wednesday night it was the site of one of the more significant memori…

The Tulsa World's Barry Lewis throws out some names, including some fun ones, as candidates to be Allan Trimble’s successor.