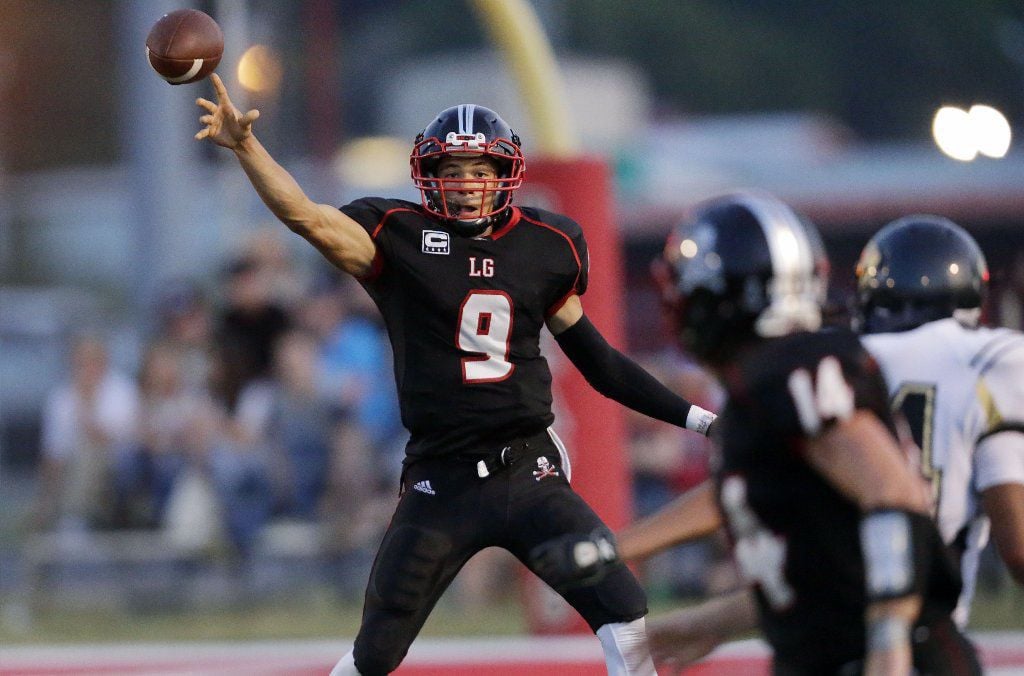 NFC quarterback Drew Brees (9), of the of the New Orleans Saints, warms up before the NFL Pro Bowl football game against the AFC Sunday, Jan. 26, 2020 in Orlando, Fla. (AP Photo/Phelan M. Ebenhack)

NFC quarterback Drew Brees (9), of the of the New Orleans Saints, warms up before the NFL Pro Bowl football game against the AFC Sunday, Jan. 26, 2020 in Orlando, Fla. (AP Photo/Phelan M. Ebenhack)

Drew Brees told Mason Fine he was too jacked to play quarterback.

In preparation for his NFL pro day on March 26 in Denton, Texas, Fine traveled to San Diego during his spring break last week to train at Fitness Quest 10 with the likes of New Orleans Saints quarterback Drew Brees and Chase Daniel, who is the Chicago Bears’ backup quarterback.

When Brees showed up the facility Monday, he immediately asked Fine what position he played, then found it hard to believe Fine played quarterback, not because of his shorter stature at 5-foot-11, but because of his stocky build.

“So, yeah, Drew Brees said I was too jacked to play quarterback,” Fine joked. “I will say I have a little bit more of a muscular build than him, but that doesn’t mean anything when you’re holding the career passing yards and touchdowns record like Drew.”

Fine ended his college career as the University of North Texas’ career leader in passing yards and touchdowns as a four-year starter. Before then, Fine graduated from Locust Grove, where he broke every state passing record in the book.

UNT was Fine’s only Division-I FBS offer out of high school, though, because of his height. Four years later, he’s being overlooked again for the same reason, not getting an invite to the NFL combine despite his experience and numbers. However, this time around, it seems Fine’s college success has earned him more respect from NFL scouts compared to what he got from college recruiters.

“Obviously you’re gonna get your weaknesses from having a smaller stature and you’re gonna have a weakness of having a smaller build in your height,” Fine said. “Scouts are gonna go pros and cons. That’s always going to be a con of mine. Scouts are always going to tell me that, but it’s probably been about 50/50, scouts telling me, ‘We don’t care about that, this team doesn’t care about that,’ and there are scouts saying, ‘Hey, your size is small, but you can sling it, and that’s not gonna deter us away from scouting or looking into you.’”

Because of his height, Fine has always been compared to Brees, who’s listed at 6 foot and Fine says is about an inch taller than him. That similarity is what made Brees a role model for Fine, who even wore the same No. 9 as Brees in high school.

“We were changing in the locker rooms at the gym, and I said, ‘Man, I don’t want to sound like I’m fangirling over you, but you gave me great inspiration. I always looked up to you, and when people told me I couldn’t do it, I just pointed to you,’” Fine recalled. “If he can do it that gives me a glimmer of hope that I can.”

From Daniel, Fine learned about the finances of a professional athlete and the details of the collective bargaining agreement NFL players recently approved. From Brees, Fine learned why Brees, 41, is a future Hall of Famer and got a glimpse of what it takes to reach that status.

“He’s very detail-oriented,” Fine said. “Just take what you think an elite athlete does. He goes the max. He’s literally focused in when he’s there. He focuses on each exercise, but he does every exercise like he’s throwing. …

“He’s also real flexible, mobile for his age and stuff like that. I mean, he’s getting up there in age, but, man, he was kicking my butt working out and stuff. It was just knowing the mindset of it all and the way he attacks stuff.”

When Fine shared with Brees that he was an inspiration, Brees immediately brought up the guy he’s always categorized with — Seattle Seahawks quarterback Russell Wilson, who is listed at 5-foot-11. Brees and Wilson are veterans, but the group of successful quarterbacks that were supposed to be too short is growing with 6-foot Baker Mayfield and 5-foot-10 Kyler Murray, and, maybe soon, 5-foot-11 Mason Fine.