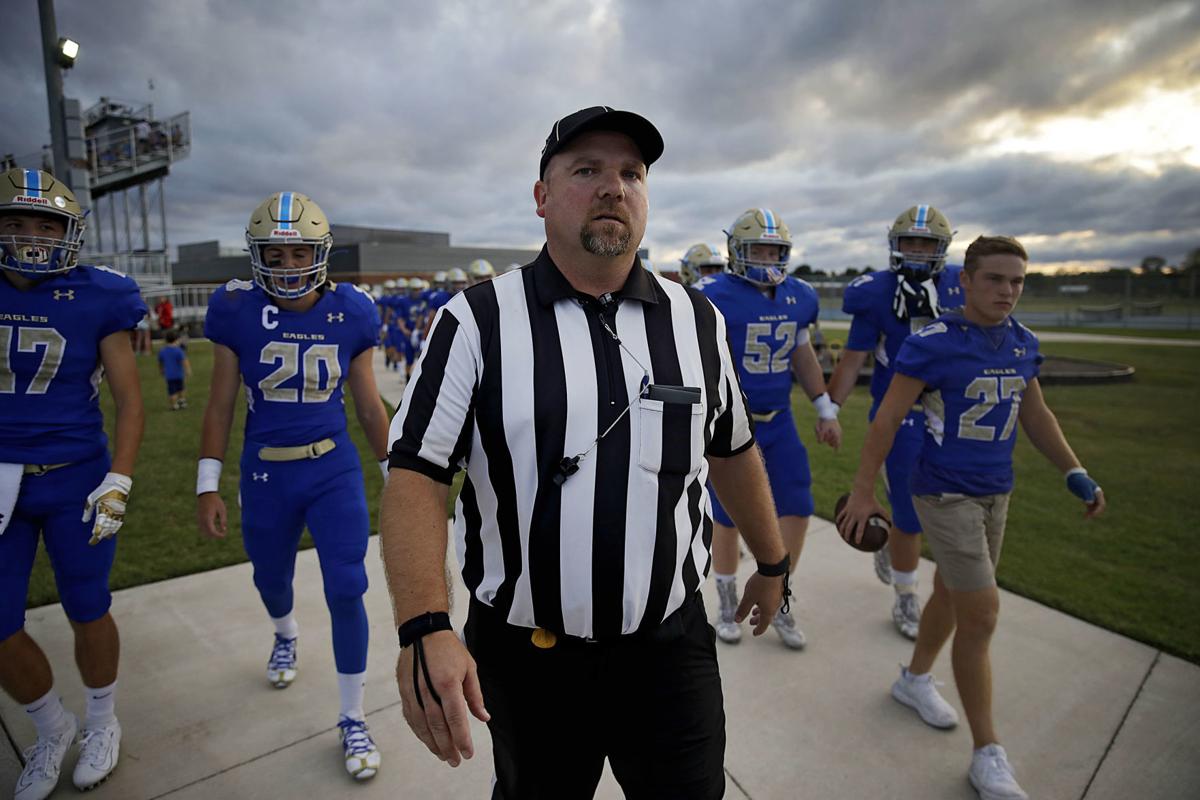 Official Dusten Hobson makes his way to the football field with Rejoice Christian before their game against Haskell on Sept. 20. “Right now we are at 992 officials,” reports Grant Gower, director of officials for the Oklahoma Secondary School Activities Association. “That’s down from about 1,100 last year.” MIKE SIMONS/Tulsa World 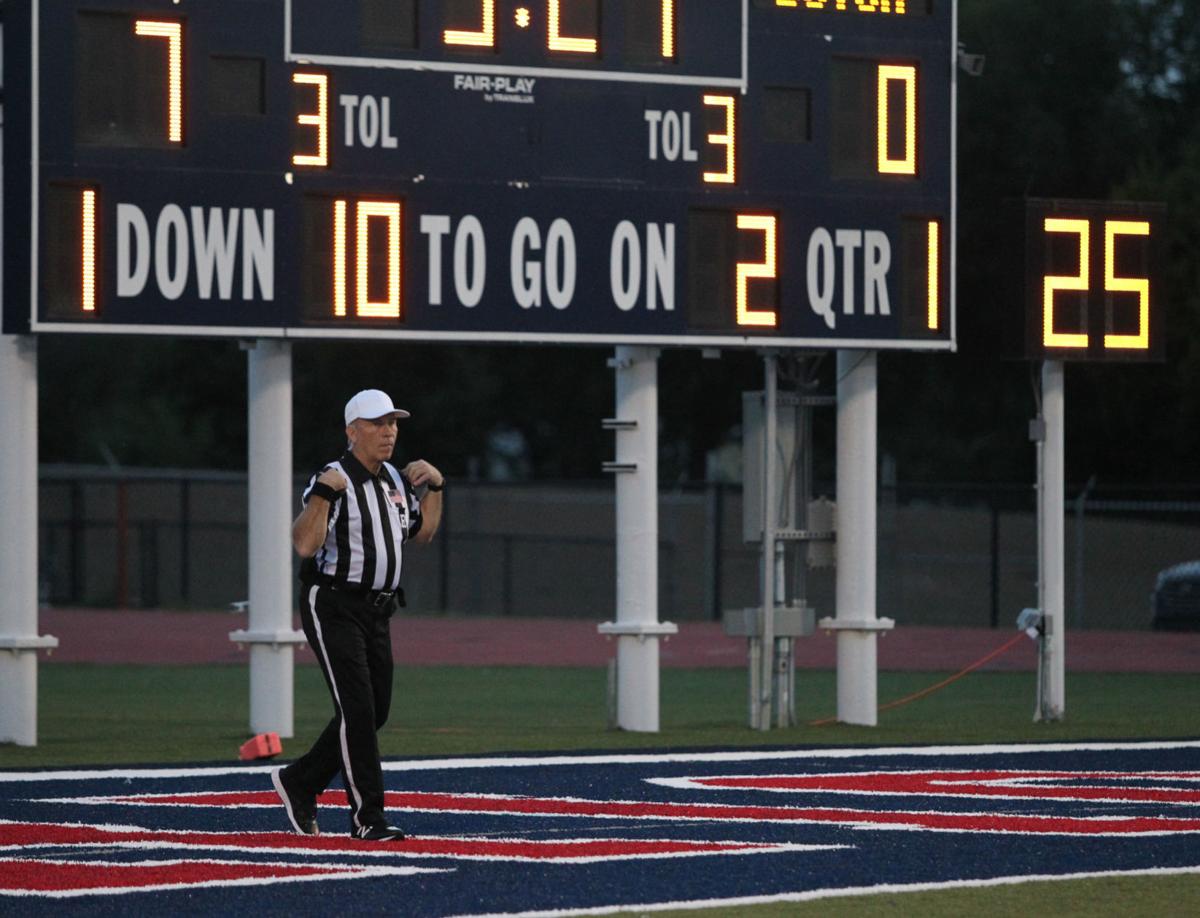 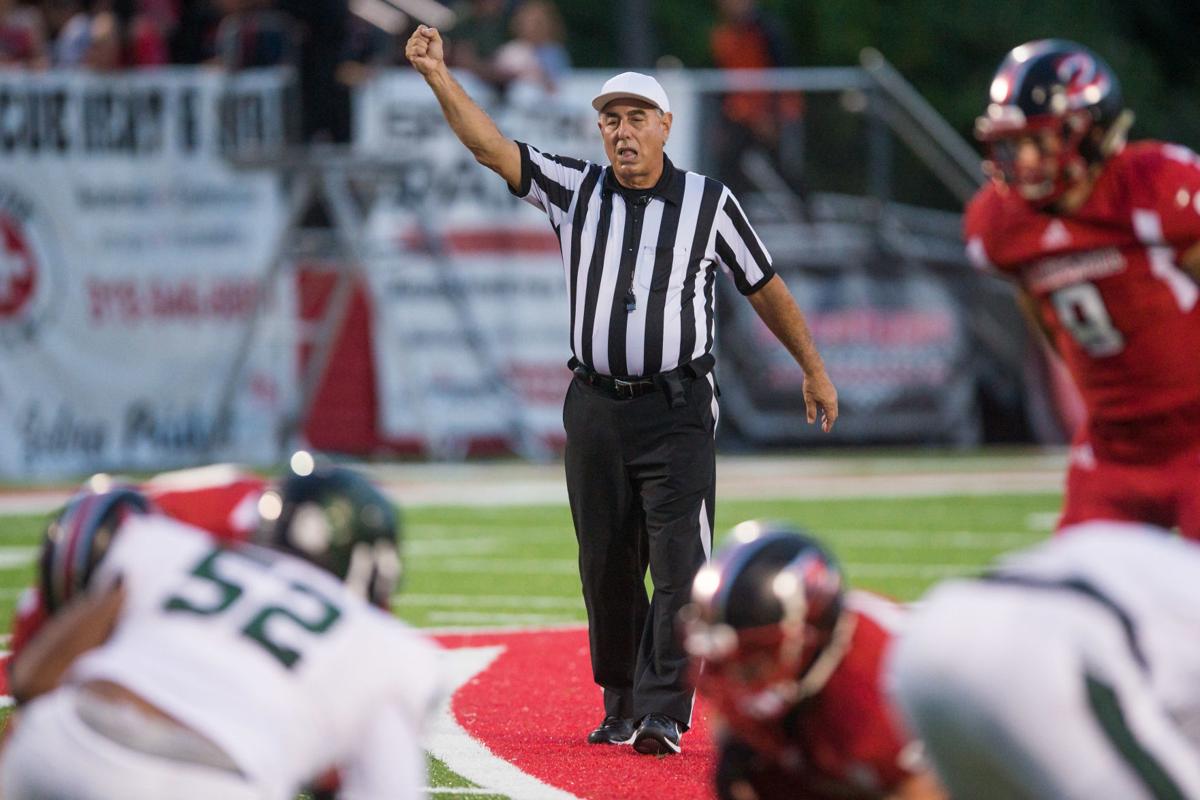 Referee Harold Alspaugh signals during a game between Edison and Claremore at Lantow Field in Claremore on Sept. 20. BRETT ROJO/For the Tulsa World 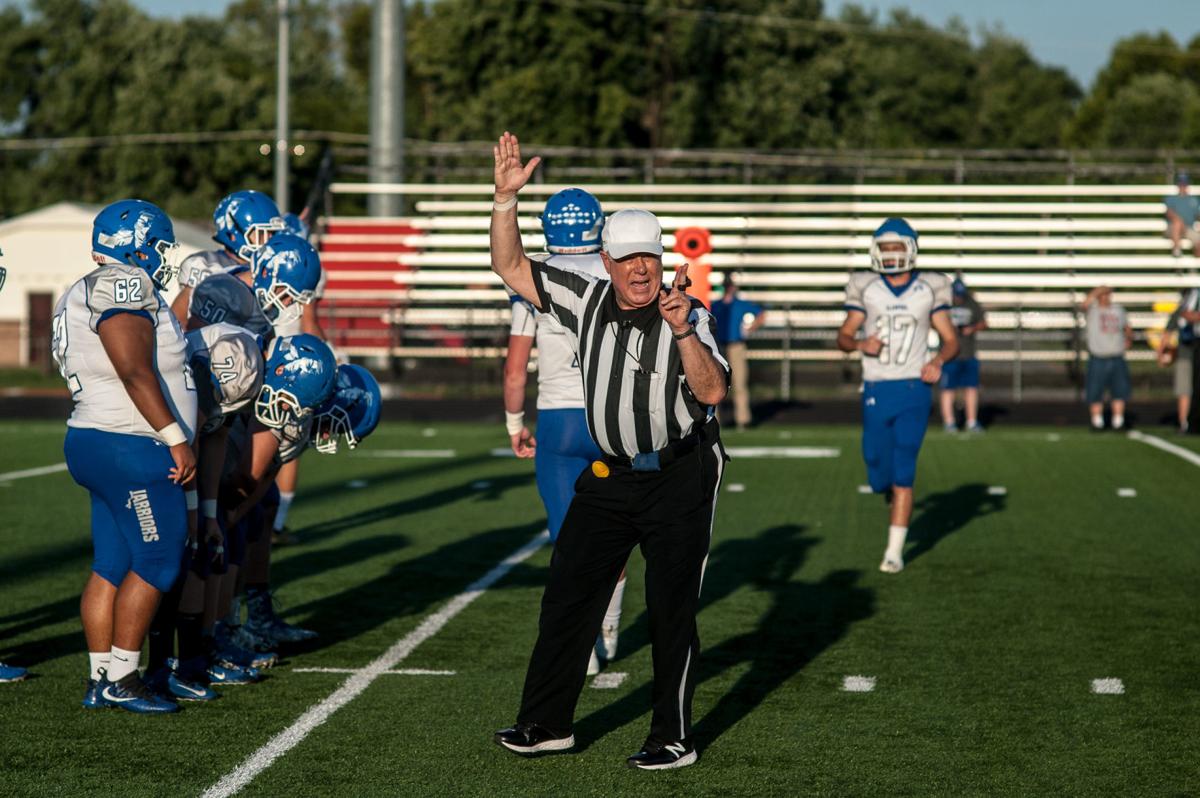 “A couple years ago, a friend of mine was working a sub-varsity game,” Breedlove begins. “One of his first-year guys was with him, since you try to work veterans with less-experienced officials to help teach them. Well, this guy comes to my friend at halftime. I guess they’d had a rough first half.”

A pitiful fact about football and most youth sports: the younger the kids playing, the worse-behaved the adults watching. The adults direct their tantrums at the kids and at each other, but unleash their most juvenile outbursts at officials.

“The guy takes off his officiating hat. He takes off his whistle. He takes his flag out of his pocket,” Breedlove continues, “and he says, ‘Here. You can have these. I didn’t sign up for this.’ And the guy leaves the game.

“This gives you a thumbnail sketch of what’s going on in the world of officiating high school football. Whether it’s Tulsa, Oklahoma, or Tallahassee, Florida, or Bozeman, Montana, it doesn’t make any difference. It’s the same. That’s what’s going on.”

Referees are fleeing the profession.

A Google search reveals crises in Alabama and Tennessee, Illinois and Missouri, California and Florida. The National Federation of State High School Associations recognizes the problem on its website, where it asks would-be officials to enlist and fans to chill so that referee recruits might stick around.

There is a crisis in Texas. According to the Dallas Morning News, 80% of officials who quit the profession as recently as 2017 told the Texas Association of Sports Officials it was due to abusive behavior at games.

There is a crisis in Oklahoma.

“Right now we are at 992 officials,” reports Grant Gower, director of officials for the Oklahoma Secondary School Activities Association. “That’s down from about 1,100 last year.”

There is a crisis around the Tulsa metro.

“What happens is we get 30 rookies, 30 first-time officials to sign up and come to the meetings,” says Ethan Rolen, president of the Greater Tulsa Officials Association. “They’ll be certified by the OSSAA. They’ll do everything they need to do to work games. But from those 30, when it comes to year two, we might have 10 return.”

The trickle of recruits doesn’t keep up with the outflow of resignations or retirements, and so organizations like Rolen’s scramble to staff games.

They fast-track recruits to the varsity level, when ordinarily the rookies would get five years of sub-varsity duty first. They ask officials to work varsity games Thursday and Friday, grade and middle school games Saturday, then junior varsity games Monday.

This keeps games officiated, but at the cost of less-experienced, more-taxed crews that must keep up with faster-paced games. It is exhaustive work, and you don’t get rich doing it. Rolen reports the standard rate negotiated between the GTOA and metro schools and districts is $95 per official per game.

“You have to pretty much absolutely love it or you’re just not going to do it,” Breedlove says.

And there’s the problem: It’s difficult to love it when you’re catching hell for it as a rookie at those grade school games.

“I will tell you at the varsity level on Friday night, it is very rare to have issues,” Rolen says. “Coaches are good. They understand the line and they know not to cross it. The younger games are where the officials take the most abuse.”

“About eight years ago, we had a guy named Dennis Hartney at the GTOA,” Breedlove says. “He took it upon himself to contact all 24 or 25 people that did not return for their sophomore year and asked why they did not come back. The answers were as broad as humankind is. Their jobs, their health, their spouses.

“But the number one reason they did not return to officiating for their second year was pee-wee football.”

Remember that repulsive 2017 video showing two Union coaches brawling at a third-grade game? Would an environment that toxic be worth $95 to a 19-year-old college kid who signed up to make a little extra money? Or to a 23-year-old former small college player who just wanted to stay invested in the game?

“Especially at the third-, fourth-, fifth-grade level, these are volunteer coaches. They don’t know the rules like a high school coach,” Rolen said. “So it’s a little different dealing with grade-school coaches. And grade-school parents are right there on top of you. There’s no fear for them coming down to the field and yelling at you.”

“They used to call them helicopter parents. Bulldozer parents might be more appropriate,” Breedlove says. “They bulldoze every obstacle, they think, to their child’s well-being. They’re out there to run the show, so to speak.”

Maybe they would act differently if there was no show to begin with.

Again, the OSSAA and GTOA are getting games officiated. They are having to be creative, but they are avoiding cancellations due to the referee shortage.

They are investing in outreach, going into schools to promote the benefits of the profession, tapping into less traditional demographics like older teens and women. They are establishing mentor programs where veterans work with rookies at the troublesome grade school games.

All of this sounds encouraging.

Breedlove’s pitch on behalf of the profession sounds engrossing.

“In 1967 at age 20, when I was a junior at Oklahoma State, I got into it,” he says. “I have done it all over the United States, Alabama, Tennessee, California. I moved back to Stillwater in ’81. For 15 years I did Friday night lights and then did the old Oklahoma Intercollegiate Conference, and even the JV level in the old Big 8 Conference.

“It’s all about the game. And then the camaraderie, too. Being with your crew Friday night, those other four guys, is just wonderful. It’s the ultimate bonding experience because you don’t have any other buddies out there.”

Our incivility must end first, though.

Other "Beyond the Sidelines" features

In the midst of rebuilding their town following catastrophic flooding, Webbers Falls is playing football. And that's a good start

Due to ratings and revenue, college football games are invading Friday nights, a day traditionally reserved for high schools