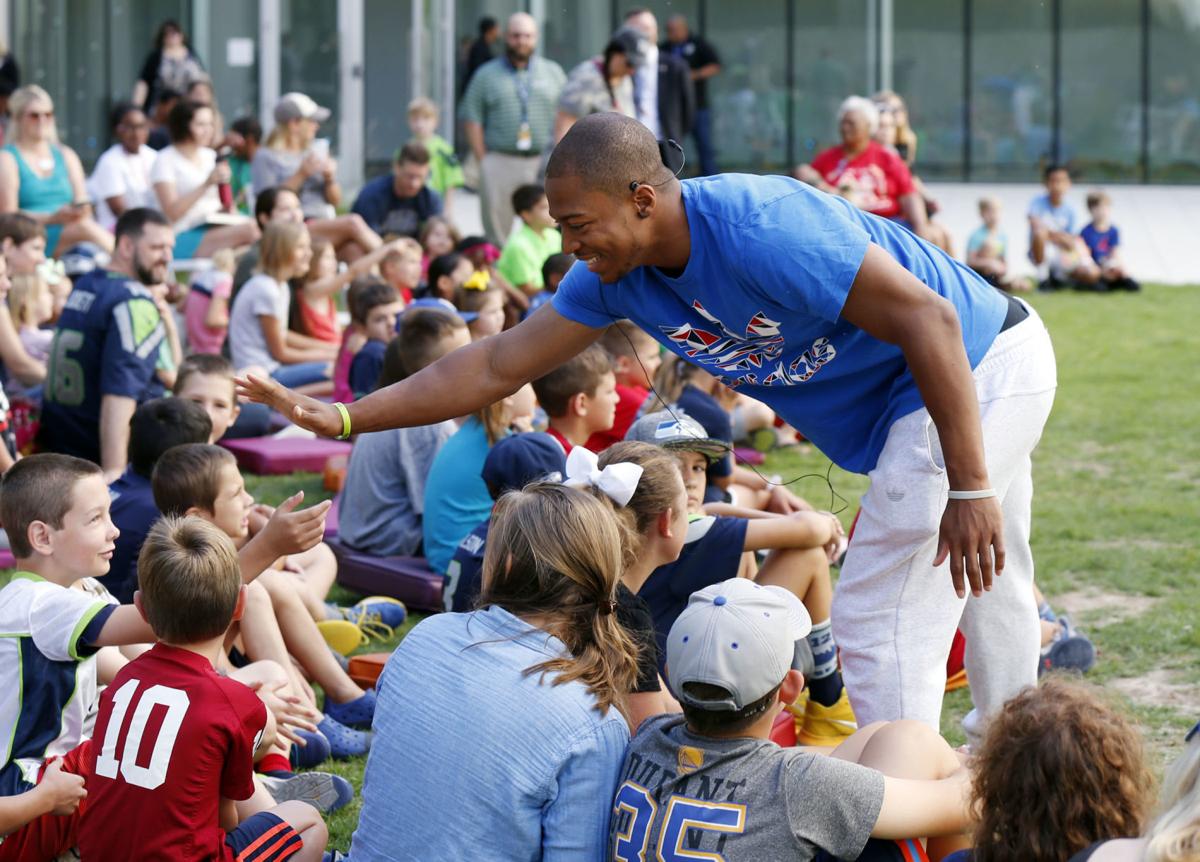 Tyler Lockett of the Seattle Seahawks high-fives kids before an event at the Tulsa Central Library in June of 2018. Lockett says he is hopeful for the next generation, but it hurts that more progress hasn’t been made toward racial equality. STEPHEN PINGRY/Tulsa World file 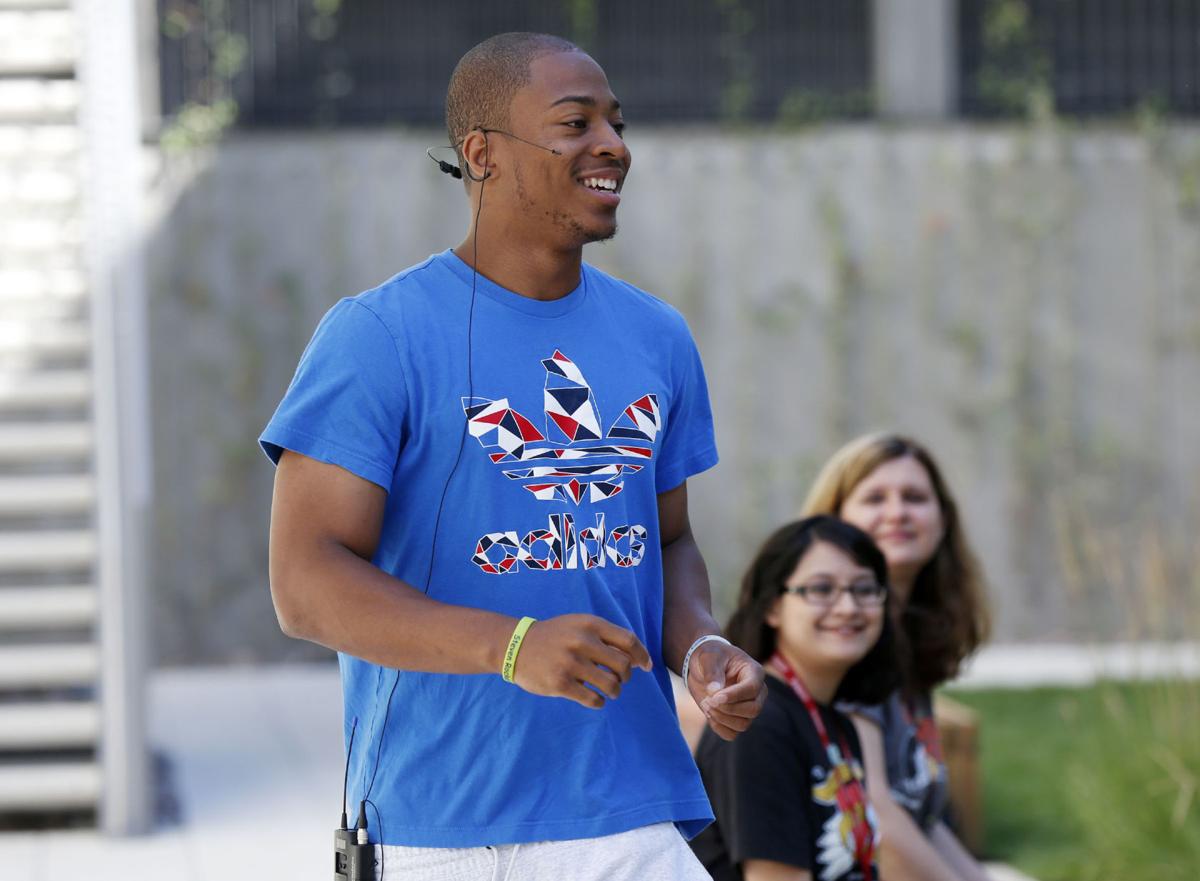 Tyler Lockett, speaking to kids at a 2018 Tulsa Central Library event, says he’s had an opportunity of late to share his experiences with his white friends. STEPHEN PINGRY/Tulsa World file

Tyler Lockett of the Seattle Seahawks high-fives kids before an event at the Tulsa Central Library in June of 2018. Lockett says he is hopeful for the next generation, but it hurts that more progress hasn’t been made toward racial equality. STEPHEN PINGRY/Tulsa World file

Tyler Lockett, speaking to kids at a 2018 Tulsa Central Library event, says he’s had an opportunity of late to share his experiences with his white friends. STEPHEN PINGRY/Tulsa World file

Tyler Lockett was leaving an Oklahoma City Thunder game one night when police pulled him over.

“They said we were speeding,” the Tulsa native and Seattle Seahawks star says. “Fifteen minutes later a backup came with a dog. They searched the car. They asked if we took any drugs. I said, ‘No. Even if I wanted to, I can’t. I’m an athlete.’ They were like, ‘Athletes take drugs.’

“I said, ‘Well, I’m a Christian.’ They didn’t say anything. They asked me what position I played.

“I said, ‘Wide receiver and returner.’ They were like, ‘Oh, so you could run away from us if you wanted to, huh.’ I was like, ‘Why would I want to do that?’

“Later on they finished the search. They found nothing. You could tell by the looks on their faces that they knew they were in the wrong.”

He tells this story now because he is anguished by what happened to George Floyd and what continues to happen to African Americans victimized by hatred. He wants so badly to be an agent for change. He believes he has found his role.

Lockett is idolized by Seahawks fans who know him in his navy and green football uniform. But do they really know him? Do they truly understand him?

Wouldn’t it help if they understood him at a time like this?

Lockett’s bridging the past two weeks has led him to share with white friends his experiences. He has told them about the incident after the Thunder game, about the white woman who interrupted his gathering in the Bel Air, California, hills once by saying, “You all don’t have any business being up here,” and about the time he was driving to a get-together in Tulsa when a white passerby slurred him with the n-word.

Lockett needs us to feel him no matter our background or life experiences or skin color.

We have known of him for so long. We have admired his feats at Booker T. Washington. We have admired the humility he carried from north Tulsa to Kansas State and into the NFL. We have taken pride in him.

“The truth about this whole thing is so many people think that because they haven’t experienced it, it’s not real,” he says. “When we share our experiences, people listen.

“When I was working on building my bridge, I said to my white friends and followers, ‘How would you feel if you knew people were out to get you your entire life?’ After they answered, I said, ‘That’s how we feel.’

“I said, ‘How would you feel if somebody believed in what you believe in, but they were afraid to speak up? And this was a life-or-death situation?’ Once they answered, I said, ‘That’s how we feel.’

“‘How would you feel if people mistook your passion for anger? That’s how we feel.’

“‘How would you feel if somebody told you they couldn’t date you because you were white? That’s how we feel.’

“‘How would you feel if people believed the stereotype more than the truth? That’s how we feel.’

“‘How would you feel if you got pulled over for driving a nice car? That’s how we feel.’

“‘How would you feel if you were seen guilty before you even walked into court? That’s how we feel.’

“‘How would you feel if being perfect wasn’t enough when for another person being mediocre is OK? That’s how we feel.’

“‘How would you feel if you walked into a store and people had their eyes on you thinking you could possibly steal? That’s how we feel.’

“The biggest thing I said after that was, ‘If it’s hard for you to put yourself in these situations, maybe you can finally understand what people mean when they say ‘white privilege.’ It’s not saying you’ve got it better than us. It’s just when I asked ‘How would you feel?’ if you can’t even put yourself in that situation, that’s what it’s saying.”

How would you feel if that was your brother being crushed under Derek Chauvin’s knee? Your father? Your son? This is a matter of human decency, and that should be simple enough for everyone to understand.

If it somehow isn’t, if your white privilege is that insulating, put a family member in George Floyd’s place as his life was being sucked from him.

“Would you speak up?” Lockett asks.

We all know the answer.

“It’s traumatizing to see everything that’s happening. Nobody wants to go through those types of things,” Lockett says, “especially when it’s the people who are supposed to protect us...

“I know there are cops out there who are good and who do their job and are willing to protect. But sometimes that’s overshadowed because of what we’ve been taught and because of what people have experienced throughout the black community.”

To hear what the black community isn’t taught is excruciating.

“In trying to bridge the gap so people understand, I tell them, ‘As black people, we’re not taught to call the cops. Because as soon as we call the cops, we’re going to be the ones seen as the suspect before we’re seen as the victim.’”

Are we listening to Lockett and absorbing his message? Are we understanding better? God help us if we aren’t. God help those who tune him out until the next time he catches Russell Wilson’s pass.

Please let us be listening.

He won’t know we have listened and understood until rallying cries become policy changes, since it takes everyone to change policy, not just those in the chokeholds of bigotry.

Toward that progress, Lockett will keep raising questions and issues that are sensible to him and uncomfortable for others. “Bridging the gap,” he keeps calling it.

“I was riding a bike recently,” Lockett says. “A white girl maybe 10 years old waved at me as I rode past. It was her and her brother. When I came back around the loop, she tapped her brother and she waved at me again and they were smiling. I waved back and I smiled.”

It didn’t take a Seahawks uniform for the little girl, or a football. She saw Tyler Lockett as nothing more than human. That was enough.

“At that moment it gave me hope that things could be different for the next generation,” Lockett says. “If this generation stands up to make sure that what we needed a long time ago, what we thought was in place, we put it in place to where it’s never brought up for discussion again.

“It just hurts that we have to fight for something that already should have been given.”

Bless the observant and passionate among us who are trying to get folks to hurt with them, so that we might rally together and join in making the pain go away.