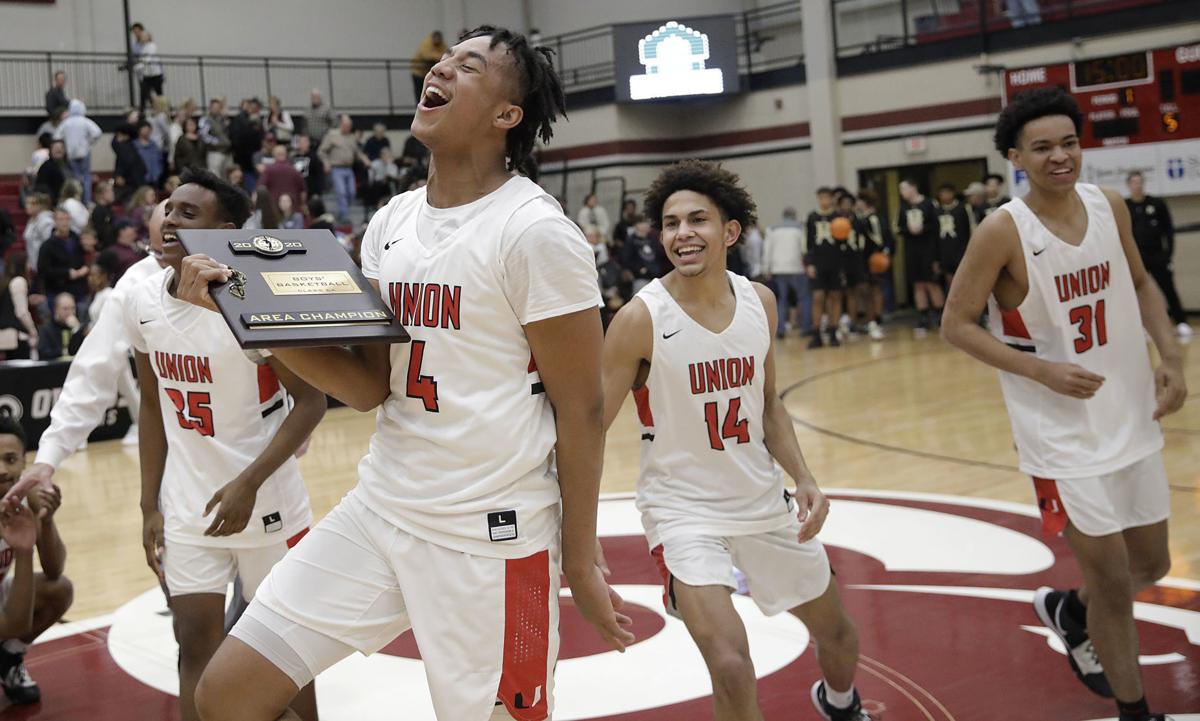 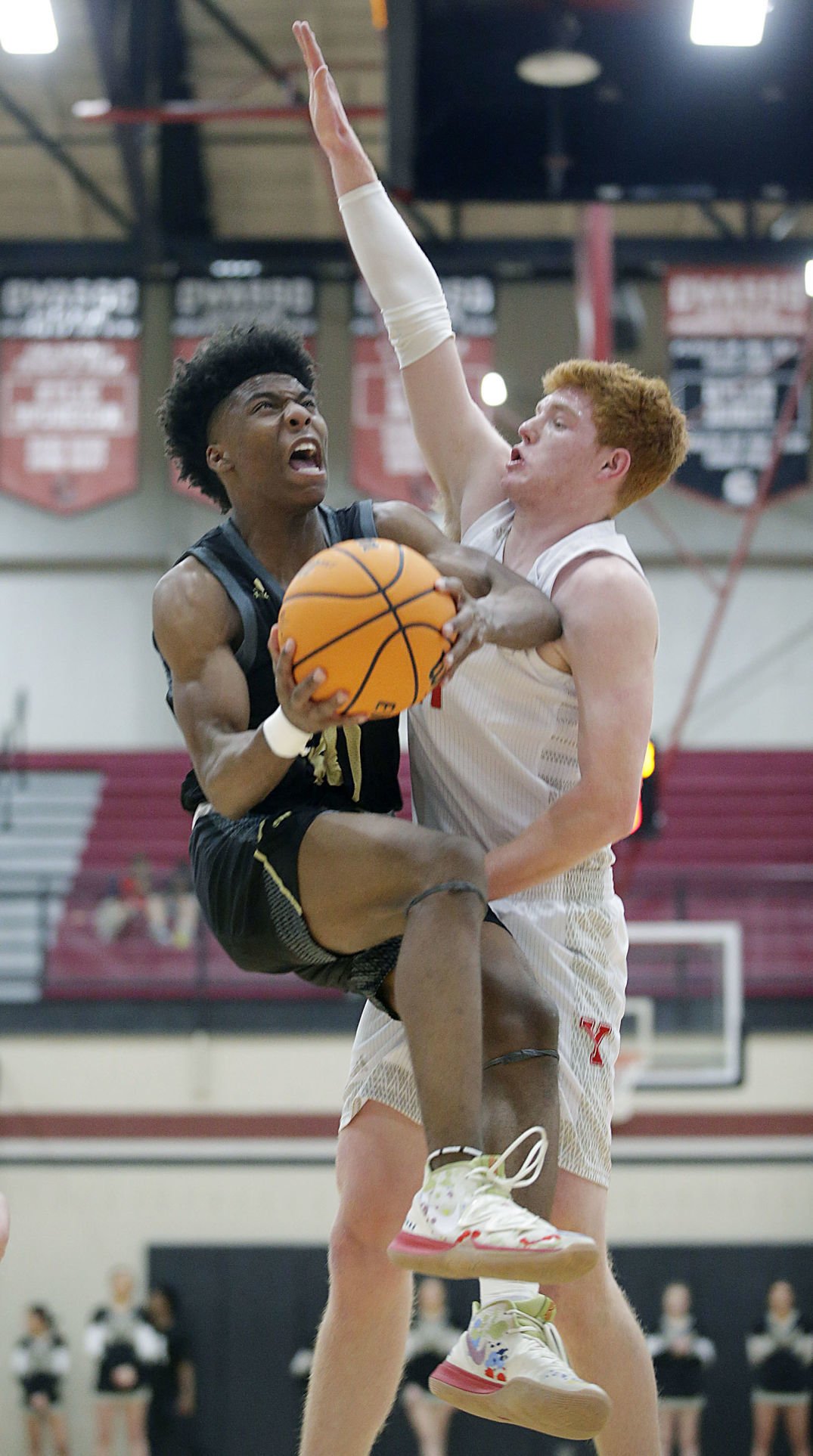 OWASSO — Jenks has pulled off several miracle finishes with long passes in its football rivalry with Union.

Nehemiah Boykins made sure the Trojans wouldn’t come up with another against Union in the Class 6A area basketball tournament title game Friday night.

Boykins’ interception in the final seconds capped a see-saw second half and saved the eighth-ranked Redskins’ 66-64 victory over No. 3 Jenks.

“Whatever it is between Jenks and Union, it’s going to be a rivalry game and both teams are going to bring it,” Union coach Rudy Garcia said. “That’s what you expect between two quality teams.”

Union (21-5), for the 21st time in Rudy Garcia’s 25 years as head coach, advances to the state tournament, which starts Thursday at Memorial Veterans Arena. RJ Forney had all 14 of his points with four 3s in the second half for Union, and Boykins scored 11. Union has won 10 in a row, including two against Jenks, after dropping two earlier meetings this season to the Trojans.

Anfernee Nelson scored 20 and Chase Martin added 18 points to lead Jenks (20-5), which can still qualify for the first time since 2015 with a victory against No. 11 Broken Arrow, a 71-56 winner over Yukon, in the area consolation final at 8 p.m. Saturday at the Catoosa Indians Activity Center. Jenks defeated Broken Arrow 60-43 on Feb. 4.

Boykins sank two free throws with 13.7 seconds left to give Union a 66-61 lead. Six seconds later, Martin answered with a 3 to set up a dramatic ending.

On the inbounds play after a timeout, Boykins’ long bomb was picked off, but he made amends by stealing the ensuing deep pass.

“Coming out of that timeout, he (Boykins) said, ‘If he’s (a teammate) wide open, do you want me to throw it?’ ” Garcia said. “I said, ‘He’s got to be wide open,’ but when he threw I was like, ‘It’s not wide open.’ He (Boykins) could have quit on the play, but he stayed on the play and got the steal that iced the game.”

Boykins’ clinching interception wasn’t his only pivotal extra-effort play down the stretch. Midway through the fourth quarter, he landed a couple rows into the stands to save a possession and send a pass that Forney converted into a trey that gave Union a 60-58 lead it would not relinquish.

“Every day in practice, Coach talks about making the extra play,” said Boykins, a senior. “I knew anything I could do, I had to do.”

Added Garcia, “That was a huge play, a hustle play. In this type of game, those are the plays that you’ve got to have. Somebody who’s going to give that little bit extra to make that play, that could be the difference, and that one play was probably the differemce.That kind of swung the momentum back our way.”

A few weeks ago, it wasn’t known whether Boykins would be able to play in the playoffs due to a sprained ankle. After missing the last three regular season games, he returned with 31 points in two regional wins last weekend.

“I was scared at first that I couldn’t play (in the postseason) when I sprained my ankle,” Boykins said. “They put it in the boot, the training staff said, ‘we got you.’ I put my ankle in their hands, and they took over.

Garcia added, “Getting him back was huge for his physicalness inside and what he brings to the team.””

And now Boykins is going to finish his senior season in the state tournament.

Tyler Pinder scored 19 and Anthony Allen added 18 points to lead Broken Arrow, which rallied for a 31-27 lead at intermission after trailing for most of the first half in the elimination game.

“We let our athletes be athletes,” Broken Arrow coach Beau Wallace said about the key to overcoming a rough first quarter. “We just wanted to be aggressive and we didn’t start out that way. We kind of got down and I said, ‘Hey, if we’re going to go out, we’re at least going to go out swinging.

”We missed some easy shots early, but in the second quarter we adjusted to their zone and we played well. Tyler is starting to get in a groove (after joining the team at mid-season). He’s starting to show what he can really do. He can play”

Gallery: Union takes on Jenks in the Class 6A area basketball tournament finals; Broken Arrow faces off with Yukon in elimination match