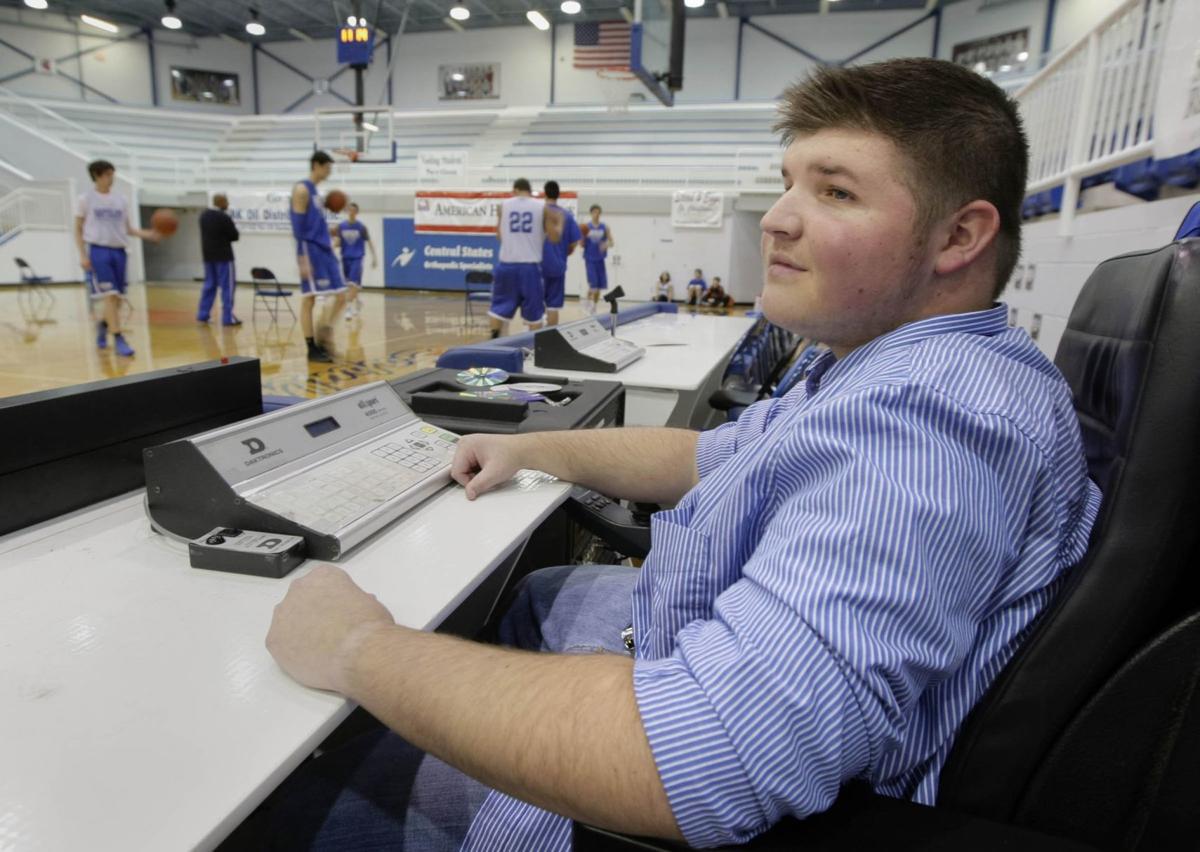 Zac Henderson, shown as a senior in 2012, served in many roles in the Chieftains’ basketball program over the past 11 years. Tulsa World file 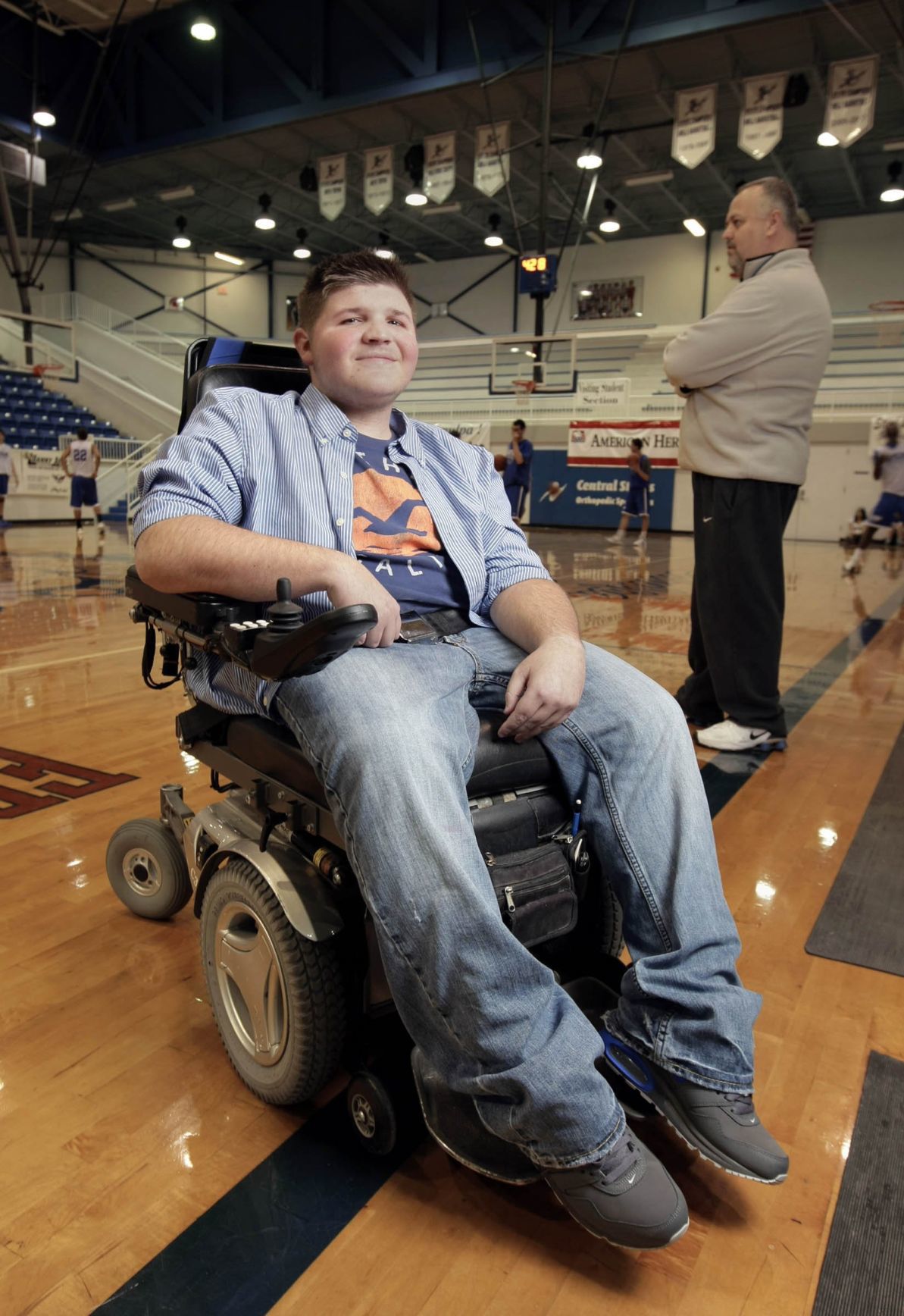 Zac Henderson, shown during a Sapulpa practice in 2012 with then-coach James Womack in the background, was a key member of the Chieftains’ basketball program. Tulsa World file

Zac Henderson, shown as a senior in 2012, served in many roles in the Chieftains’ basketball program over the past 11 years. Tulsa World file

Zac Henderson, shown during a Sapulpa practice in 2012 with then-coach James Womack in the background, was a key member of the Chieftains’ basketball program. Tulsa World file

Zac Henderson was a senior who was referred to as a “go to guy” for the Sapulpa basketball program when he was first featured in the Tulsa World in 2012.

Henderson received that label from then-coach James Womack even though he never played in a game for the Chieftains — only because he had been in a power chair since he was 12 due to Duchenne muscular dystrophy.

For the past 11 years, Henderson served in many roles for the Chieftains. He initially focused on statistics with the title of sports information director and then became an assistant coach after he graduated.

“In my 25 years of coaching, probably the best decision I’ve made as a coach was to bring Zac into our program to work with our athletes and our staff,” Womack said.

On Tuesday, Sapulpa’s Chieftain Center was nearly filled for a service that celebrated Henderson’s life, and more than 1,000 others watched online.

“Every coach he worked with was there,” Womack said.

“It’s a huge loss for our program,” current Sapulpa coach Ricky Bruner said. “Coach Zac was one of a kind.

“I leaned on him a lot. He knows the game of basketball. He sees things from a different perspective than most coaches.”

Womack remembers a semifinal game during the Ada Tournament when Henderson suggested the Chieftains run their “Subway” play — a high-screen pick and roll. It turned the game around for the Chieftains, who eventually won the tournament.

“That was when he became more than a stats guy and became a coach,” Womack said. ”That was his play, he loved it and he suggested it to all the coaches he worked with.”

Womack was in his first year at Sapulpa when he was teaching an English class that included Henderson, then a sophomore. Henderson showed his sense of humor for the 2012 story as he said with a smile that he didn’t know that Womack was a coach and that “I saw him and thought he was a big goofball.”

Due to the classroom’s design and Henderson being in a wheelchair, he wound up sitting next to Womack’s desk. That led to a lot of sports conversation and Womack inviting him to help with the basketball team.

Womack said, “I asked him what he could do, and Zac said, ‘I can do anything I want.’His hair was perfect, he dressed real nice, he was a cool normal kid. When you talked to him, the wheelchair just disappeared.”

Womack’s invitation gave Henderson a chance to become closely involved again with athletics. Although he was diagnosed with Duchenne when he was 4, he played baseball for four years before the progressive muscle weakness in his legs kept him from playing.

”All I did was open a door of opportunity, that’s what you do as a coach,” Womack said. “He was the one who went through it and took advantage.”

Womack left Sapulpa in 2014 and although he was an assistant the past six years at Oklahoma City Northwest, he stayed in close contact with Henderson, who produced a highlight film for the Knights. Henderson launched a video company, “LegitFilms,” that shot games, as well as birthday parties and graduations, and produced highlight films for Sapulpa.

“He did some amazing films, quality work on par with anybody,” Womack said. “Zac is pretty special to me. He made me a better person. He was an example of doing the best you can do with what you have to reach your full potential.”

Bishop Kelley coach Jordan Nagel was a Sapulpa assistant and often drove Henderson to road games — and to the 2014 Final Four in Arlington, Texas, after Henderson came up with two tickets for them. Nagel had known Henderson all his life, but the van trips “rekindled our relationship.”

“He’s the most positive man I’ve ever been around,” Nagel said. “He was never negative. His daily positive attitude was absolutely incredible. He had every opportunity to complain and gripe and never would.

“The world has lost a true warrior. I learned so much from being around him. He taught me to be positive, thankful and extremely patient, and love. Sapulpa truly lost a coaching legend.”

“He (Henderson) was an inspiration to anybody around him,” Phipps said. “I loved his enthusiasm for the game of basketball. I know the players had the utmost respect for him. He touched a lot of lives. He was a great young man.”

Bruner was an assistant during Henderson’s first season with the program before returning as Phipps’ successor in 2017.

“He went through so much (with his health issues) just to come to practice in the past year, but showed up every day,” Bruner said. “He’s the toughest person I know.

“I wish I had recorded some of his pregame and postgame speeches to the players. They were very motivational. He also helped players with their shooting. He was a great coach, not just with Xs-and-Os, but also with player relationships.”

In 2019, Sapulpa reached the state tournament for the first time in 20 years.

“Zac is a champion,” Bruner said. “If everyone had his heart and spirit and love for people, we would all be going in the right direction. He loved people.”

Henderson also loved the Chieftain Center. The Coach Zac Memorial Fund, sponsored by the Sapulpa First Church of God, has been set up for improvements to the arena’s video and sound system, as well for scholarships for Sapulpa athletes. Electronic donations can be made at sfcog.org and by cash or check at American Heritage Bank branches.

The Oklahoma Baseball Coaches Association’s All-State Games are scheduled July 18 at Chickasaw Bricktown Ballpark in Oklahoma City. The Large School Game will be at 11 a.m., followed by the Small School Game at 2 p.m. and Middle School Game at 5 p.m.

Nominations are being accepted for the All World Preseason Football Contest. The 80 candidates — 10 at eight positions — are scheduled to be revealed June 21. Coaches are encouraged to send nominations to Barry Lewis at barry.lewis@tulsaworld.com or call 918-581-8393. The deadline is Thursday.

Tulsa World preseason football forms were emailed to state head coaches last month. Coaches who have not received a form are encouraged to contact Barry Lewis.