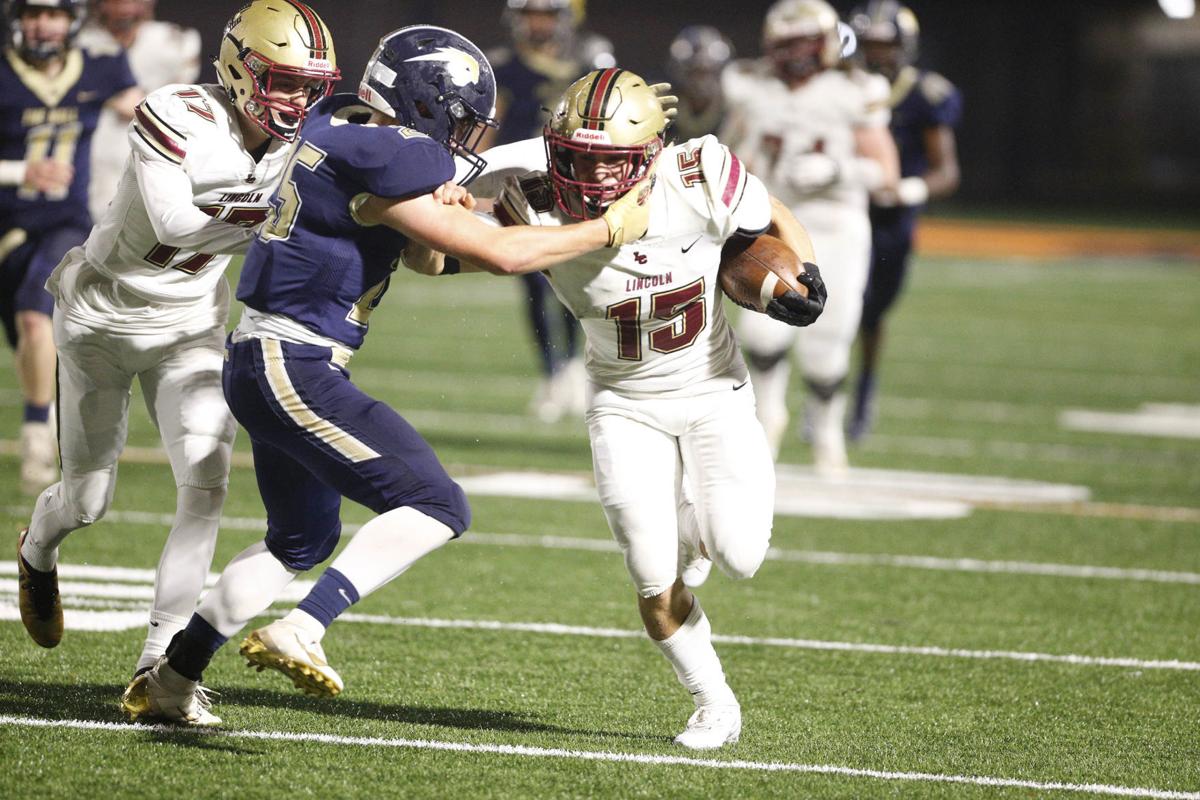 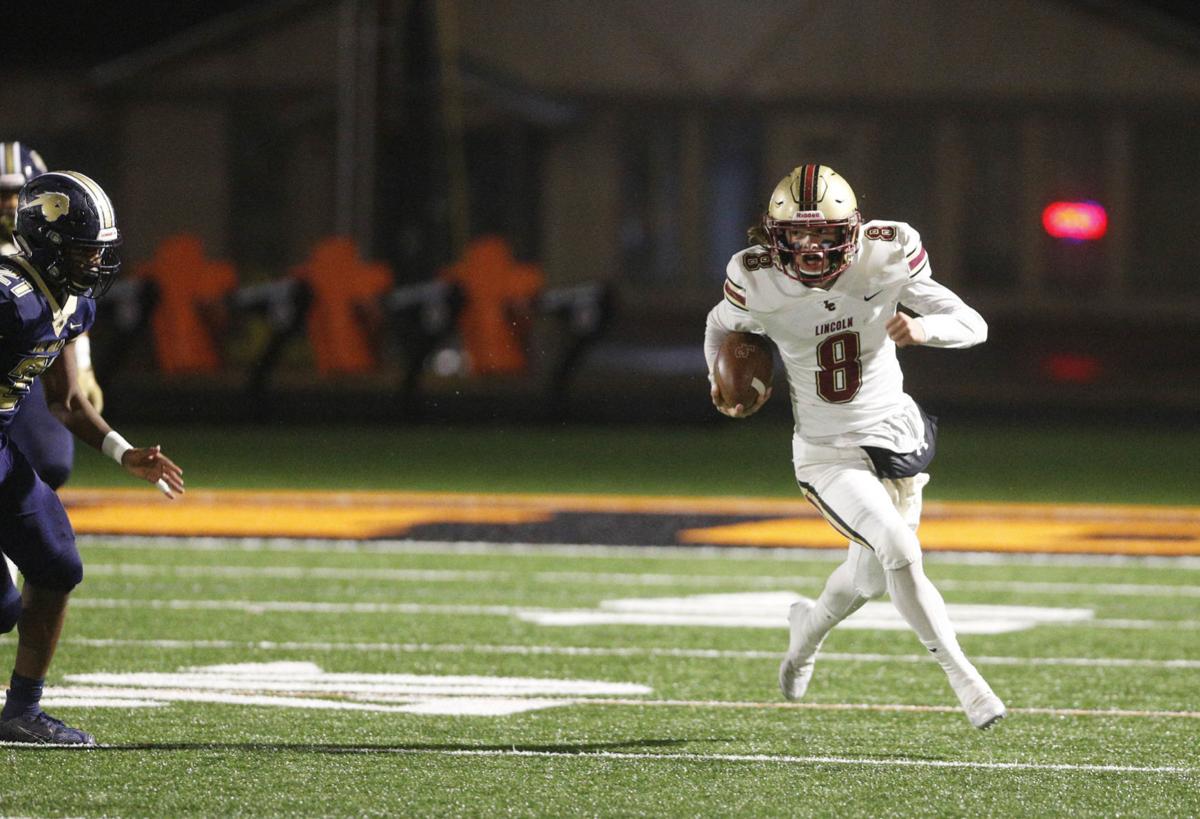 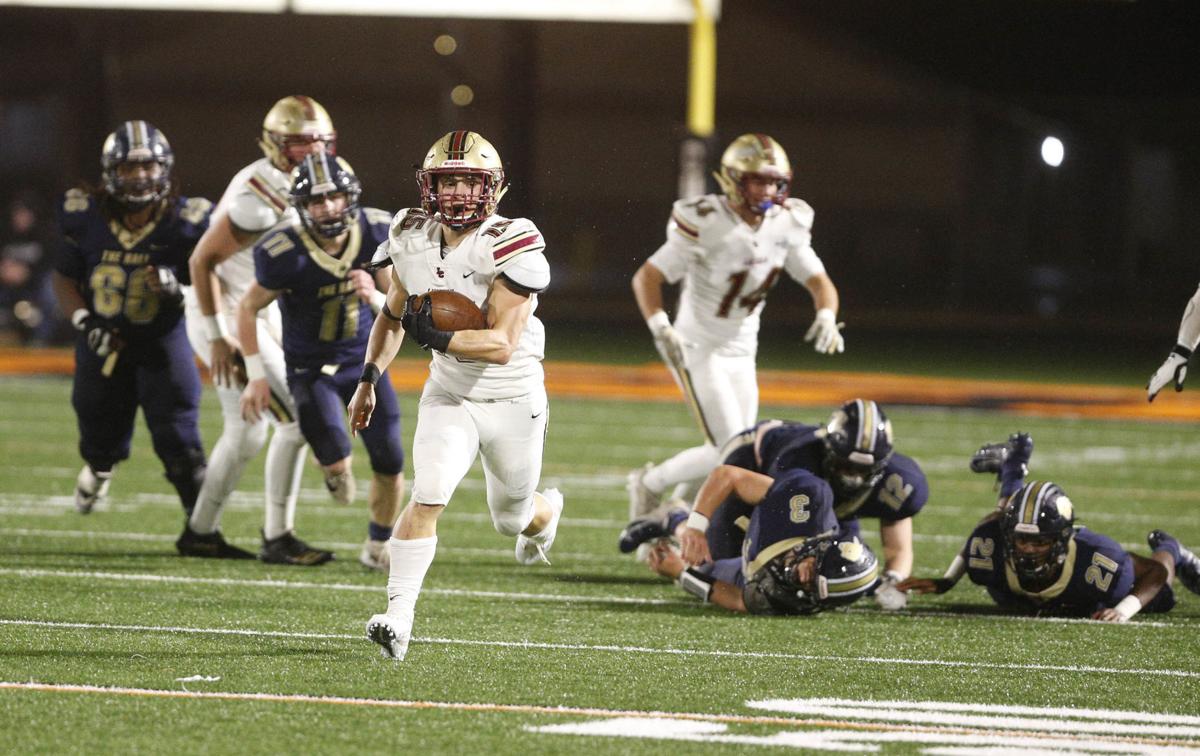 Lincoln Christian Bulldogs Josh Kaste (15) leaves defenders on the ground after making them miss en route to a long run during the Class 3A football semifinals between Heritage Hall and Lincoln Christian at Cushing High School on November 29, 2019. JOEY JOHNSON/for the Tulsa World

Lincoln Christian Bulldogs Josh Kaste (15) leaves defenders on the ground after making them miss en route to a long run during the Class 3A football semifinals between Heritage Hall and Lincoln Christian at Cushing High School on November 29, 2019. JOEY JOHNSON/for the Tulsa World

Chase Ricke threw for 194 yards and three touchdowns, including 93- and 30-yarders to Kolbe Katsis, and the No. 2 Bulldogs rolled past the No. 1 Chargers 33-6 in the 3A semifinals on a cold and drizzly night before about 2,000 spectators in O’Dell Field.

Connor Johnson caught a 50-yard TD pass, recovered a fumble and led a dominating defense as the Bulldogs (13-0) broke Heritage Hall’s 24-game winning streak over two seasons and punched their ticket to a state championship game for the third time.

The Bulldogs will face No. 3 Plainview, which eliminated Verdigris in the other semifinal, at 11 a.m., Dec. 7 at the University of Central Oklahoma’s Wantland Stadium.

Lincoln avenged a 69-34 loss to the defending champion Chargers in last year’s semifinals and a 38-14 loss at Stillwater in the 3A final in 2015.

“Our kids have been waiting 365 days for this,” coach Jerry Ricke said. “They put themselves in this position and took advantage of the situation. There are so many kids who stepped up tonight, it’s ridiculous, and I’m proud of every one of them.”

Lincoln’s coaches talked all week about the importance of getting a quick start, and the Bulldogs delivered.

The defense forced a three-and-out to start the game, and the offense marched 40 yards in six plays to make it 7-0 on Josh Kaste’s 8-yard run. Kaste also had an 11-yard TD in the fourth quarter and finished with 134 yards on 29 carries.

Next, speedy Phillip Smitherman’s 35-yard run put the Chargers in Lincoln territory, but Johnson and company forced a turnover on downs and the 6-foot-3, 190-pound Johnson followed by catching Ricke’s pass over the middle and turning it into a 50-yard scoring play.

Lincoln led 14-0 at that point and followed with the biggest play of the night. The Bulldogs’ next possession started at their 7, and following a first-down play that went nowhere, a doozy of a play came in from the sideline.

Chase Ricke faked a handoff and then rifled the ball deep. Some 55 yards later, Katsis ran under it and raced to the end zone ahead of two defenders.

“It’s a read play, and I saw the safety pull up and kind of bit,” Chase Ricke said. “I knew our guy was faster than theirs, and it was the most perfect ball I threw all night.”

What did Katsis think about the call from the sideline?

“I was just saying to myself, God’s gonna take care of everything like that, and I’m gonna do my job, and Chase Ricke’s gonna do his job,” he said.

Heritage Hall showed signs of life in the third quarter, but Ricke slammed the door by rolling left on fourth-and-9 from the Chargers’ 30 to throw his second TD pass to Katsis. That made it 27-0.

“After that,” he said, “we were pretty sure we were gonna win.”

Heritage Hall led 3A in scoring defense, allowing only 7.5 points per game, but it was the Bulldogs who were stifling this time. Austin Lovelle and Cooper Lancaster intercepted passes, and the Bulldogs allowed only 223 yards.

“Our defense played outstanding,” Jerry Ricke said. “(Defensive coordinator) Mitch Bigby and all of our defensive coaches had a great scheme, and our kids went out and did the rest.”