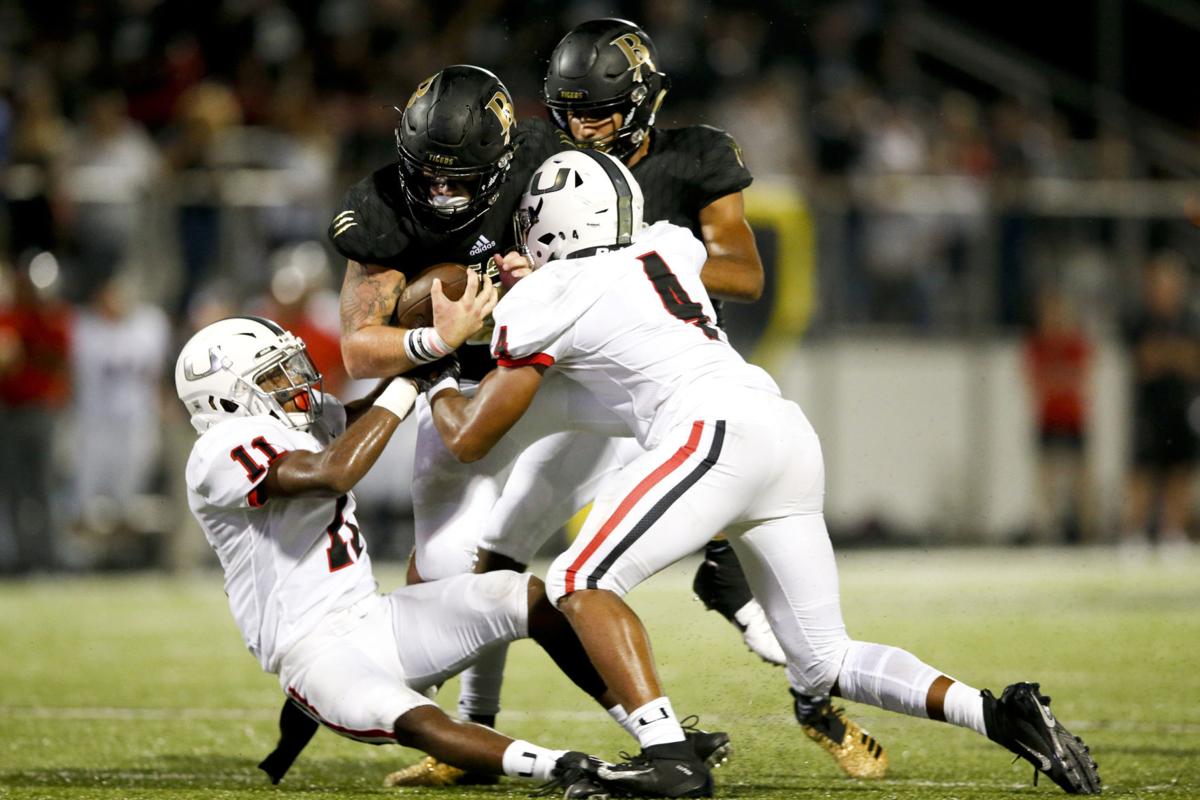 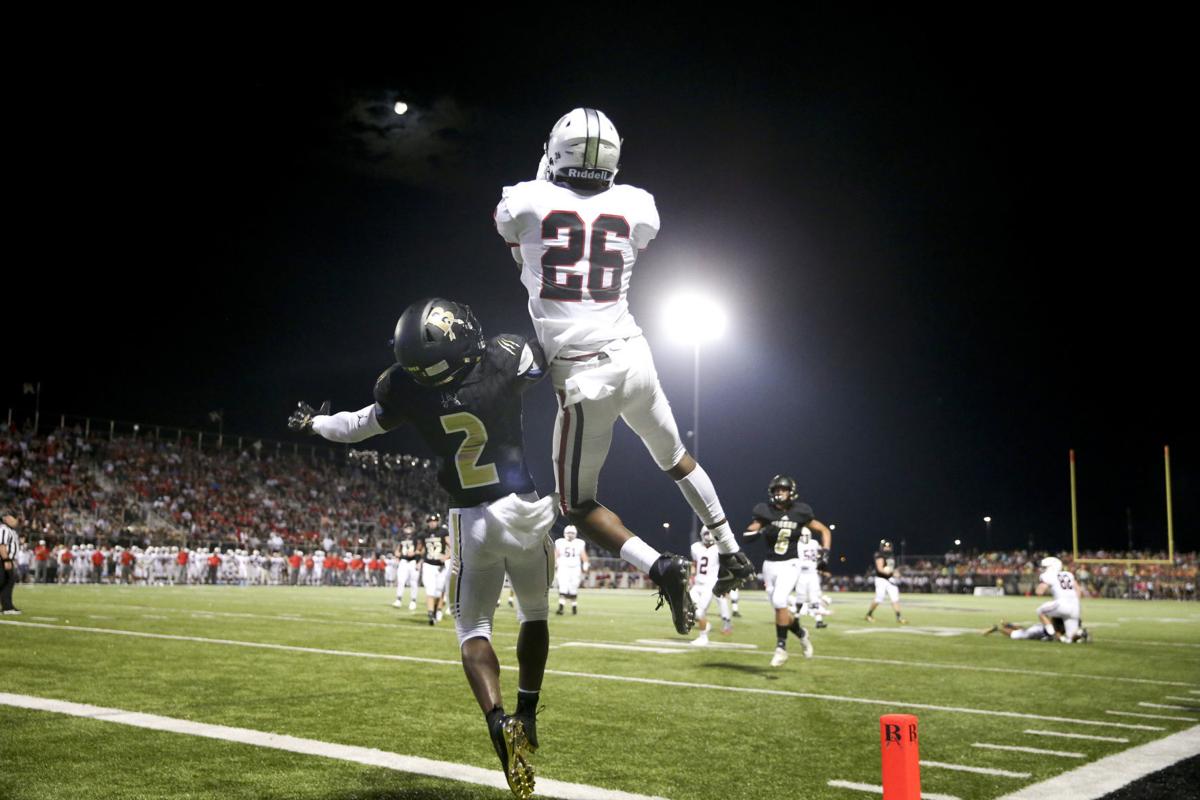 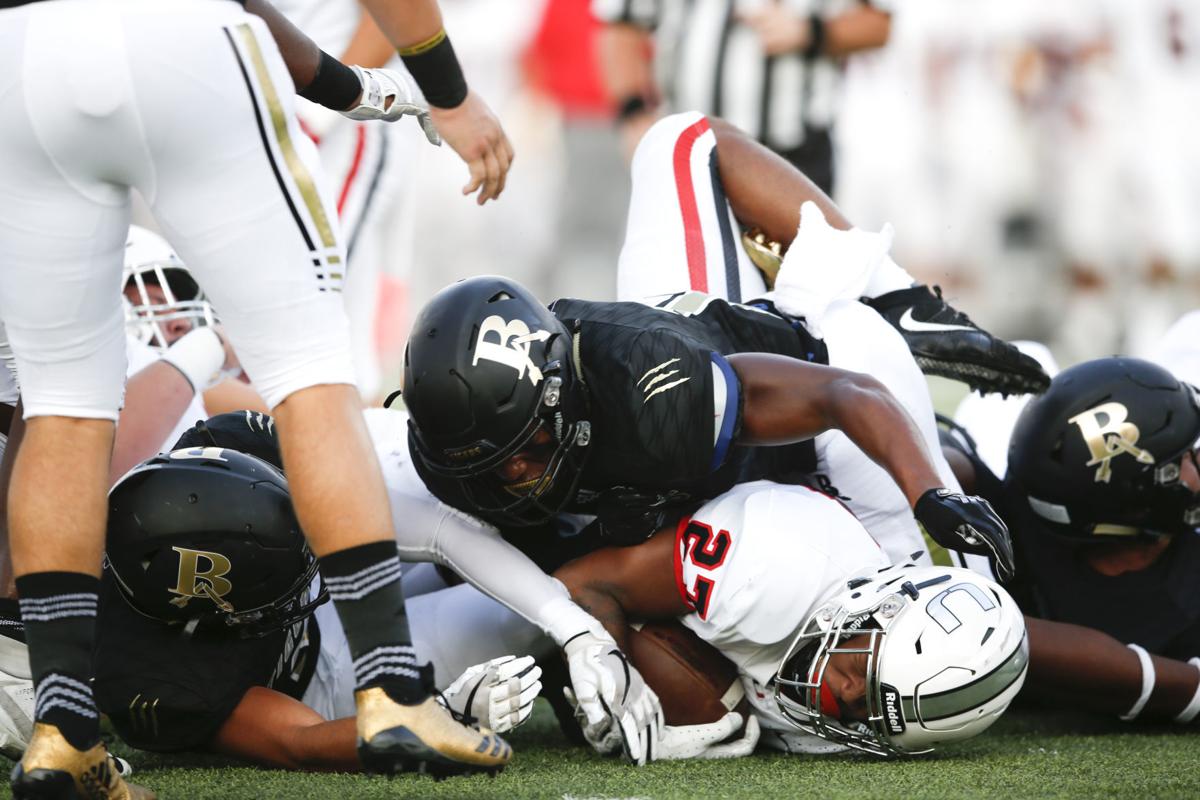 Union running back Darius Boone gets tackled by a group of Broken Arrow defenders during their game at Broken Arrow High School on Friday, August 24, 2018. IAN MAULE/Tulsa World

Union running back Darius Boone gets tackled by a group of Broken Arrow defenders during their game at Broken Arrow High School on Friday, August 24, 2018. IAN MAULE/Tulsa World

BROKEN ARROW — Broken Arrow’s Noah Cortes rushed for 1,602 yards last season, but in two combined losses to Union barely had over 100 as the Tigers could not run the ball effectively, especially while being shut out in the Class 6AI semifinals.

Friday night’s season opener, however, was another story.

Cortes had 26 rushes for 157 yards and two touchdowns as No. 2 Broken Arrow defeated top-ranked Union 33-10 in a 6AI showdown before a sellout crowd of 11,000 fans at Memorial Stadium.

It was Broken Arrow’s first win over Union since 2008 and only second in 38 games against the Redskins dating to 1990.

“My offensive line is unbelievable,” Cortes said. “It’s a different year. We’re a different team. We’re going to come back with the gold ball this year. This is a different team than any Broken Arrow team that has come through here.”

Broken Arrow took a 19-10 lead going into the fourth, plenty of time for Union to rally. Instead, it was the Tigers who scored two TDs as Cortes, running behind Raym and the rest of the offensive line, wore down the Redskins.

“That’s what we talked about all week,” Raym said. “We knew we weren’t going to get much movement on them in the first half, but in the second half we were going to pound it down their throat and go right through them.”

The Tigers’ last two scoring drives were 10 plays for 80 yards and then nine for 85. Tigers fullback Kaizer Newell dived into the end zone from the 2 for the first fourth-quarter TD, and Cortes sealed the outcome on a 26-yard TD run with 1:42 remaining.

“Everybody knows we have the power game,” Raym said. “Our power game is strong. We probably have the most veteran offensive line in the state, and we showed it.”

Union’s Darius Boone Jr., also a 1,600-yard rusher last year, had 155 and two TDs against Broken Arrow in the semifinals last year, but was shut down Friday by a defense led by linebackers Zach Marcheselli and Gavin Potter. Boone was held to 45 yards on 16 carries.

Segraves’ opening field goal was set up by a 19-yard punt ahead of Cortes’ 20-yard run. After Union’s third consecutive three-and-out to open the game, an errant snap that went off the punter’s hands turned into a safety as Potter and Marcheselli combined in the end zone for a tackle that made it 5-0 with 4:14 left in the first quarter.

“Everyone talks about our returning quarterbacks and running backs and those types of things, but not having a lot of guys returning on special teams hurt us,” Union coach Kirk Fridrich.

Union scored on its fourth possession, sparked by wideout Spencer Shadle turning a 10-yard pass into a 49-yard reception. Early in the second period, Peyton Thompson fired a 15-yard TD pass to Kyler Pearson as Union cut its deficit to 12-7.

Noah Rauschenberg’s 45-yard field goal with 4:47 left in the first half reduced Broken Arrow’s lead to 12-10 that was carried into intermission.

“We lost in all three phases but still had a chance to be in the game,” Fridrich said.

The Tigers increased their lead to 19-10 on scrambling quarterback Tate Robards’ 16-yard TD pass to Isaiah Keller with 4:49 left in the third quarter and dominated the rest of the game.

“This is better than I ever imagined,” Raym said about the Tigers ending a 14-game losing streak against Union.

The team's ranked No. 1 and No. 2 in Oklahoma's biggest class battle Friday night in the season opener.