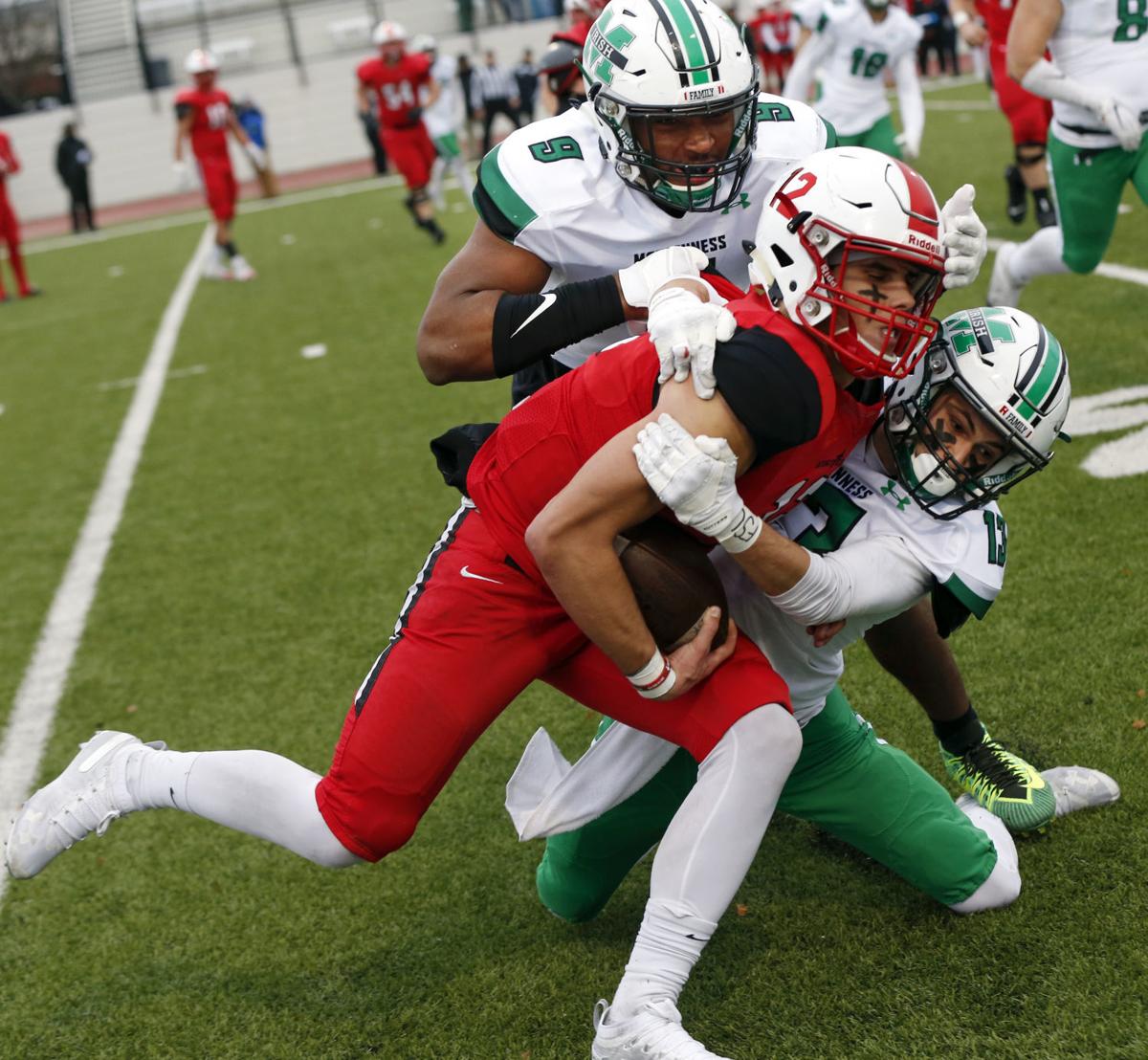 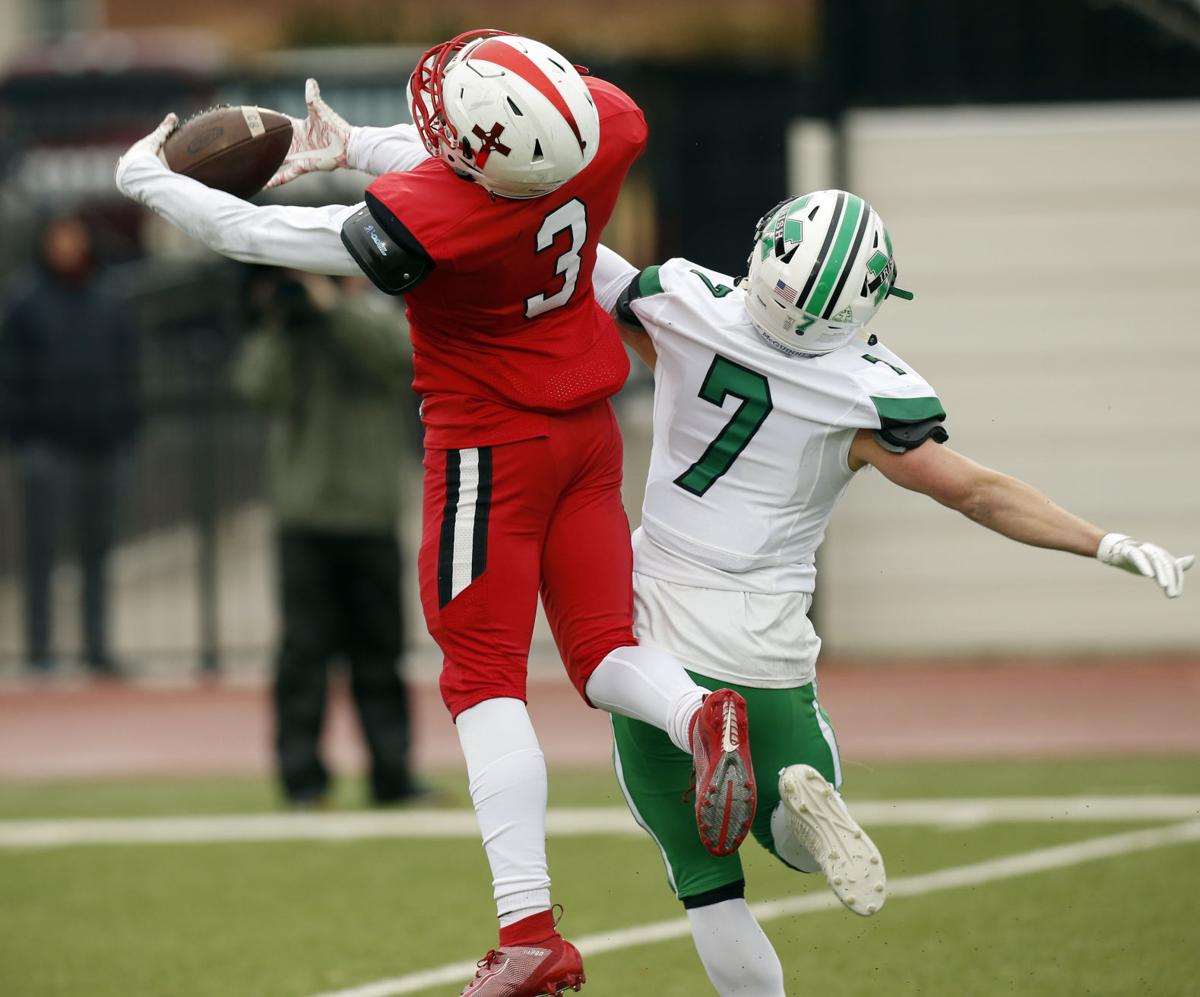 OKLAHOMA CITY — In the past three years, Bishop Kelley has seen its fair share of OKC McGuinness running back Dominic Richardson.

And Richardson, a TCU commit, made his last performance against the Comets one to remember.

Richardson rushed for 243 yards and scored three touchdowns and the Irish defense came up with three key interceptions as No. 3 McGuinness raced to a 48-22 victory in a Class 5A semifinal Friday afternoon at Charles W. Sheid Stadium on the Western Heights High School campus.

“We have had to play him five times,” Kelley coach JJ Tappana said about Richardson, a 6-foot-1, 210-pound senior. “He’s a very, very special kid.”

Right from the outset, Richardson showed just how special a talent he is.

Lining up in the wildcat formation to open the game, he accounted for all 65 yards as McGuinness marched down the field for a touchdown on its first possession.

Richardson capped that eight-play march by breaking several tackles and scooting 30 yards around right end for his first TD less than four minutes into the game.

His second TD came less than three minutes later and was set up by the Irish’s first interception of Comets quarterback Stephen Collins.

Attempting to throw a screen pass, Collins’ toss was tipped and intercepted by McGuinness’ Sam Bass, whose 33-yard return set up the Irish at the Kelley 6-yard line.

Three plays later, Richardson — again from the wildcat — went off left tackle untouched from the 6 for a 14-0 Irish lead with 4:30 to play in the quarter.

“That was it,” Tappana said. “You just can’t do that (interception and resulting touchdown) and be down 14 points in the first five or six minutes of the game.”

From there, it was a matter of No. 7 Kelley trying to play catchup to the Irish — and Richardson — the remainder of the game.

The Comets (8-5), who had won six of their past seven games and were in the semifinals for a second straight year, did close to within 14-7 in the final minute of the quarter when Jeremiah Besses hauled in a pass from Colliins on a post pattern for a 43-yard touchdown.

But that is a close as the Comets got.

Tarman’s TD ended a 16-yard, five-play scoring drive that was set up by a 20-yard punt return by Aaron Beck and a 15-yard Bishop Kelley penalty for a late hit.

That was one of 10 flags whistled on the Comets for 113 yards. McGuinness was flagged for 96 yards in penalties on eight infractions.

After netting just 19 yards rushing on 13 carries in the first half, Kelley found some running room after halftime with running back Owen Heinecke scoring twice.

With the Comets backed up to their goal line and trailing 31-7 late in the third quarter, Heinecke took a handoff at the 2, broke a tackle and cut to the left sideline, then outraced Irish defenders on a 98-yard TD scamper.

“”We needed something,” said Heinecke, who finished with 142 yards rushing on 10 carries.

“The guys in the offensive line opened up a big hole and I just took it the distance.”

But just 26 seconds after Heinecke’s long TD run, Richardson responded with a 74-yard jaunt for his third TD of the day and a 38-14 McGuinness cushion.

Heinecke’s second TD came from 18 yards in the opening seconds of the fourth quarter. Collins’ two-point conversion pass to Cooper McMurray — his only catch of the day — made it a 38-22 score.

But after Collins’ final interception at the Comets 21, Tarman responded with his second score, a 40-yard run with 7:02 remaining, and the Irish were on their way to the finals.

Besides holding McMurray to no catches and no rushing yards for the game, the Irish defense limited Collins to only one completion for no yards in the second half.