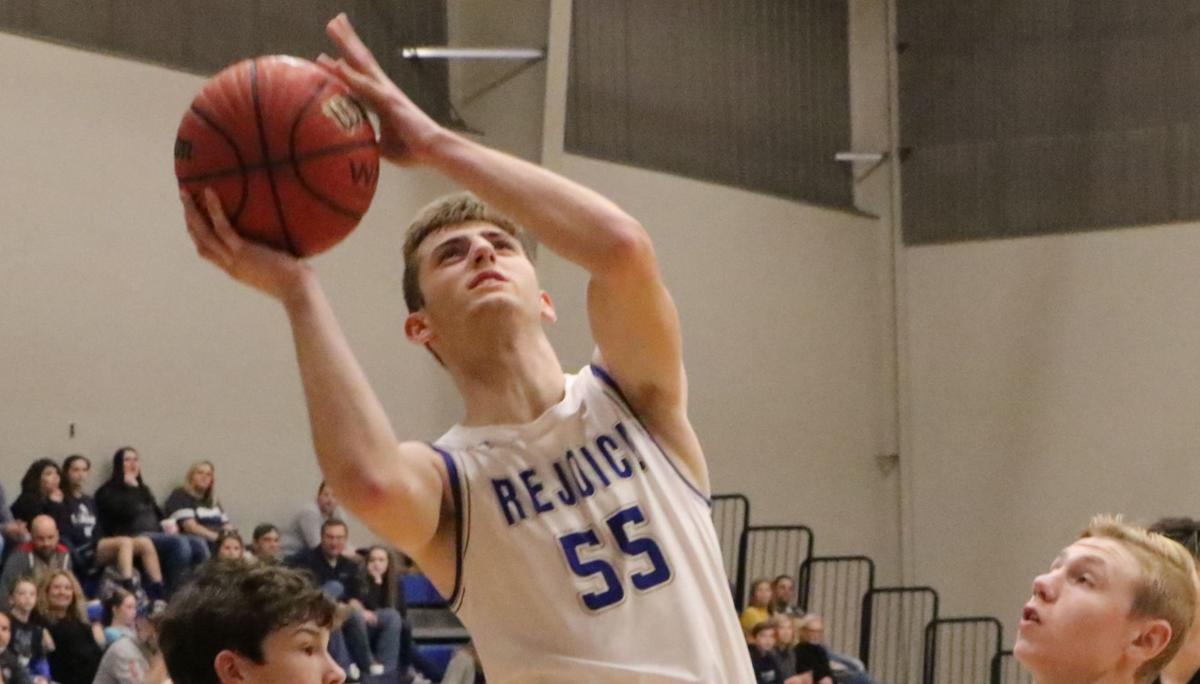 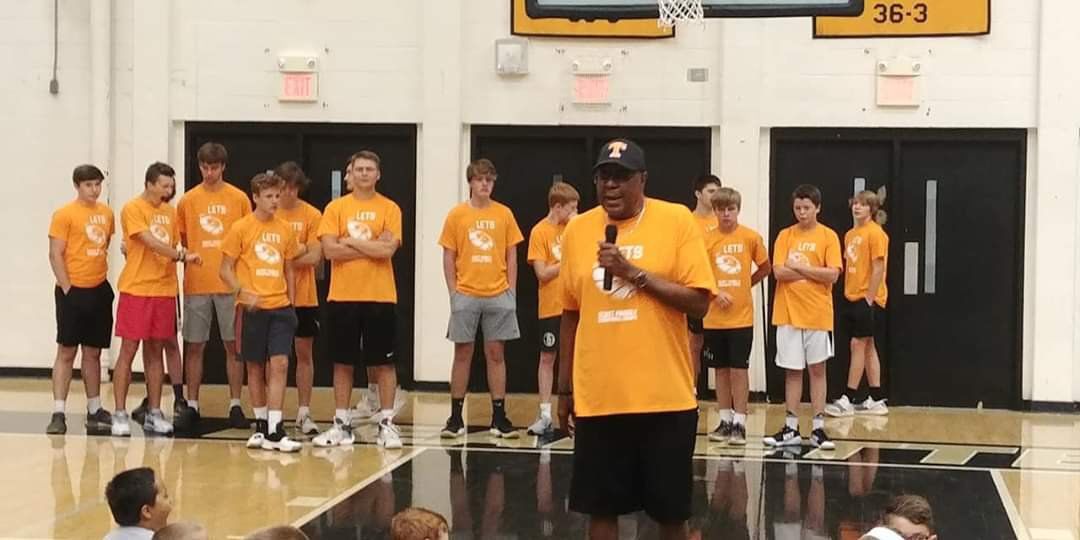 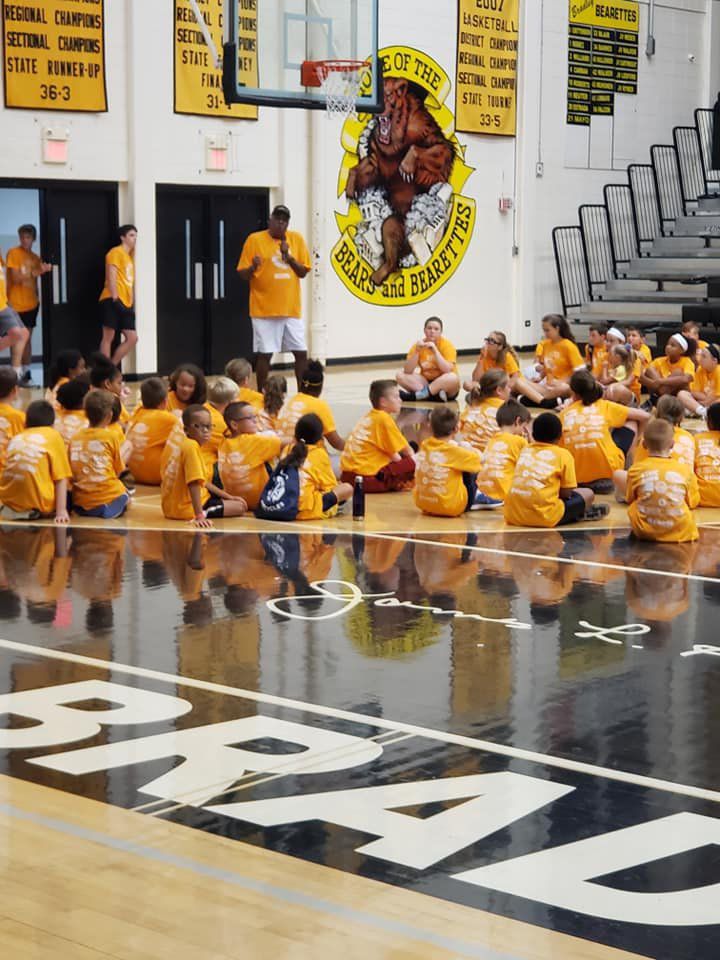 Terry Scott talks to students last week at the LETS Camp in Cleveland, Tenn. The coach who led Central to three state basketball championships was a guest speaker this week at the OCA Clinic. 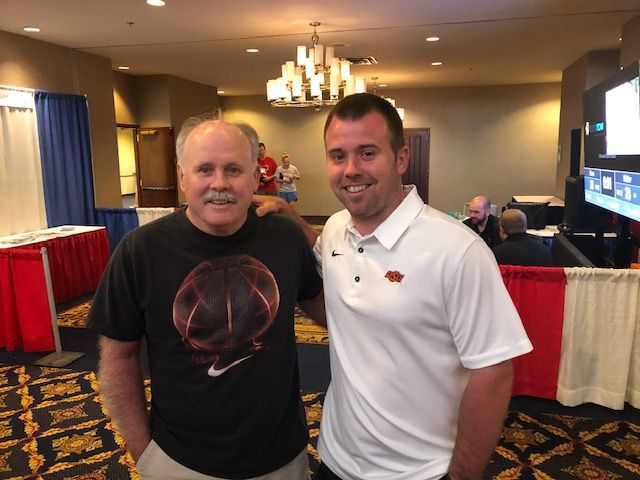 Pawnee basketball coach David Page and his son, Keiton, at the OCA Clinic on Wednesday at the Marriott Southern Hills. BARRY LEWIS/Tulsa World 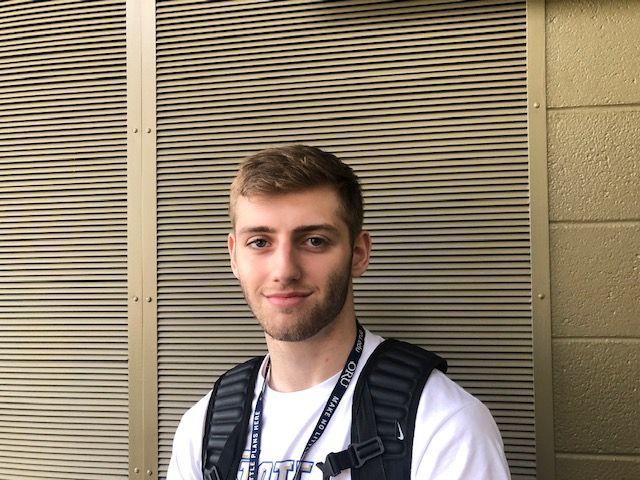 Terry Scott talks to students last week at the LETS Camp in Cleveland, Tenn. The coach who led Central to three state basketball championships was a guest speaker this week at the OCA Clinic.

Pawnee basketball coach David Page and his son, Keiton, at the OCA Clinic on Wednesday at the Marriott Southern Hills. BARRY LEWIS/Tulsa World

Too small for other sports, McLain's Thaddeus Long found success on the mat

Most of the players in Thursday night’s All-State Games will continue their basketball careers in college.

For Rejoice Christian graduate Justin Seay, however, it will be his farewell to competitive basketball.

Seay could have played college athletics, but he will be attending the University of Arkansas only as a student, studying business in preparation for a career involving data analytics.

Seay, who was born in Fort Smith, Arkansas, was a big part of one of the most amazing athletic stories from the past school year as Class 2A Rejoice Christian surprised most experts and won its first state basketball title. The Eagles, who were 13-15 a year earlier, entered the postseason ranked No. 9. After a regional loss, they won six in a row to claim the gold ball, including the last five against higher-ranked teams.

“It was crazy,” Seay said Wednesday after checking into the Oklahoma Coaches Association’s All-State camp at the Mabee Center. “I was surprised that we did it. After we lost in the regionals we had to win six straight and I was pretty sure that we weren’t going to do it, but everything worked out and went our way. I don’t know if we could do it again.”

The 6-foot-4 Seay was selected as the World’s 2A state tournament MVP. In a 52-42 win over Hennessey in the state final, he had 22 points on 10-of-18 shooting, five rebounds, three assists and two steals. During the area and state tournaments, he averaged 20 points, 4.8 rebounds and shot 64.5% on 2s. In two seasons after moving from Owasso High School, he averaged 16 points in 57 games.

Seay decided a year ago that he wouldn’t continue in athletics past high school. He also was a kicker on the Eagles’ football team that went 13-1 and reached the Class A semifinals, and he played soccer.

“I had played enough basketball and I was kind of getting tired of it,” Seay said. “I didn’t reach out to any college coaches. I just wanted to play my senior year and have fun..

”I turned out to be pretty good at kicking and had a lot of college interest, but didn’t want to do that, either.”

Although Rejoice’s soccer team had a losing record, he enjoyed the chance to play with his brother, Austin, for the first time since they were little kids.

Seay is looking forward to his final game Thursday.

“It’s cool,” he said. “The lights are bright at Mabee Center, and I’ll be going against the best players. It will be fun.”

Seay will be in the Small School game that starts at 7 p.m. The Large School game at 8:30 p.m. will include another East player in his final basketball game, Owasso guard Seth Pomeroy, the World’s 2019 Mr. Outside winner, who will focus on his studies at Oklahoma.

Memorial’s Kalib and Keylan Boone, who have each won an All-World basketball player of the year award, withdrew from Large East roster for the All-State Games on Wednesday due to class and other basketball obligations at Oklahoma State.

The Large East’s head coach will be Skiatook’s Shane Branscum, who will be assisted by Josh Berry, who coached the past seven seasons at Muskogee. This will be Berry’s last boys game after he was named last month as Sand Springs’ girls coach.

Scott and his siblings last week conducted the third annual LETS (Life Education Through Sports) Camp in his hometown of Cleveland, Tennessee.

“I want to continue coaching and teaching, and this keeps me doing that because I have no desire to have a head coach’s day-to-day responsibilities,” said Scott, who was inducted into the Tulsa Public Schools Athletics Hall of Fame in January.

Scott’s brother, Alvin, a former Oral Roberts and Phoenix Suns player, has a foundation that helps sponsor the camp.

Terry Scott was an assistant on the 1974 ORU team that lost to Kansas in the Elite Eight. Kansas was coached by Ted Owens, who was at the OCA Clinic on Wednesday.

David Page, who coached Pawnee to four state boys basketball titles in six years from 2005-10, said Wednesday while at the OCA Clinic that his team in the upcoming season has the potential to be its best since going 28-1 in its last state tournament appearance in 2016. “We should be a top-eight team,” said Page, who was with his son, Keiton, the World’s 2008 state co-player of the year and the state’s No. 2 career leading scorer.

The 2019 All-State games are ongoing this week in Tulsa. Take a look at the events so far here and see all Oklahoma high school sports coverag…