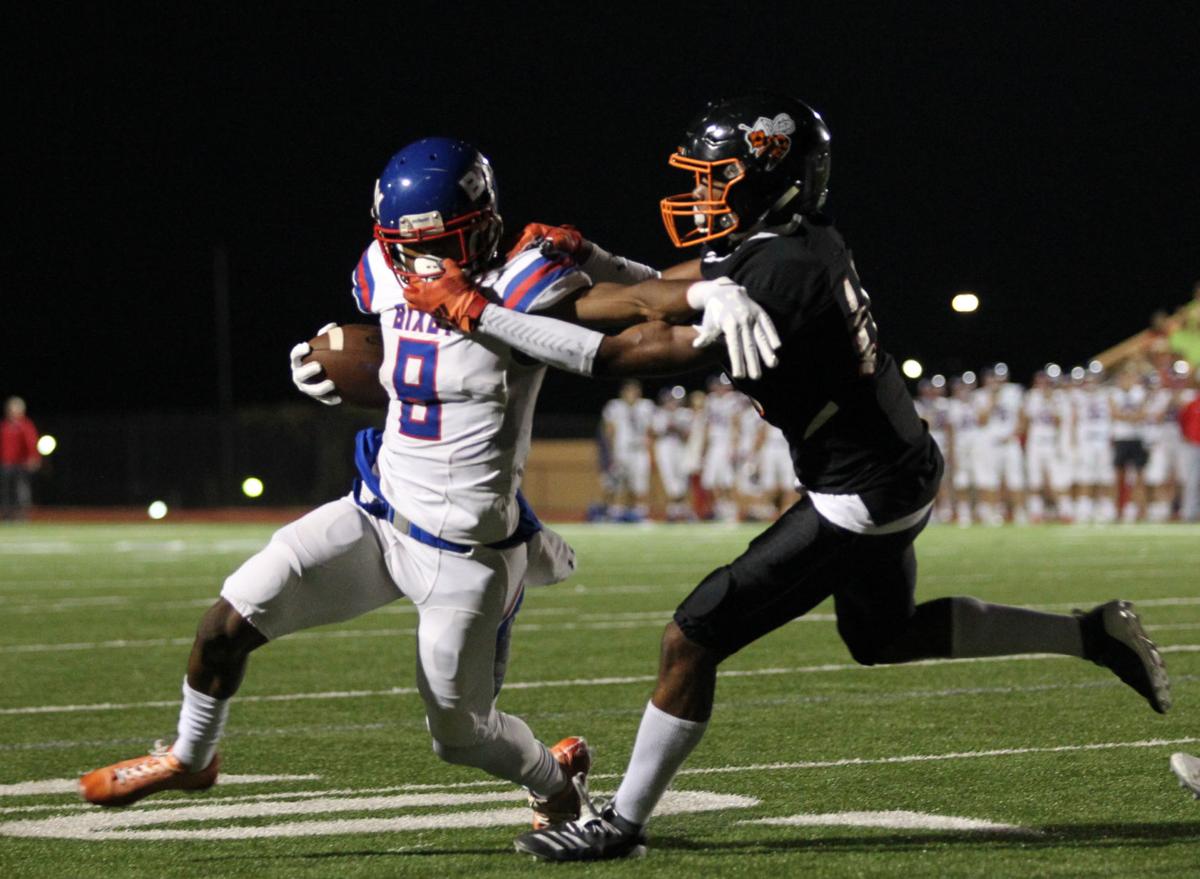 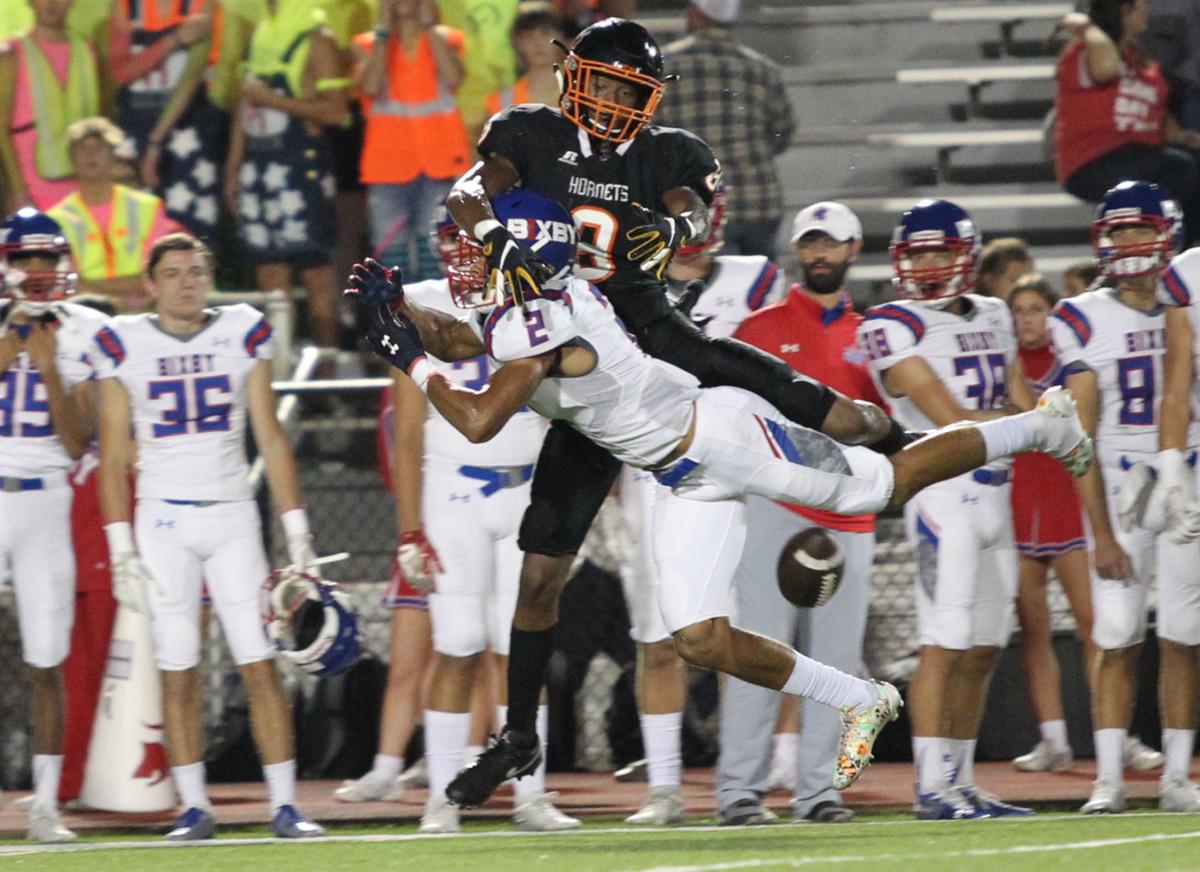 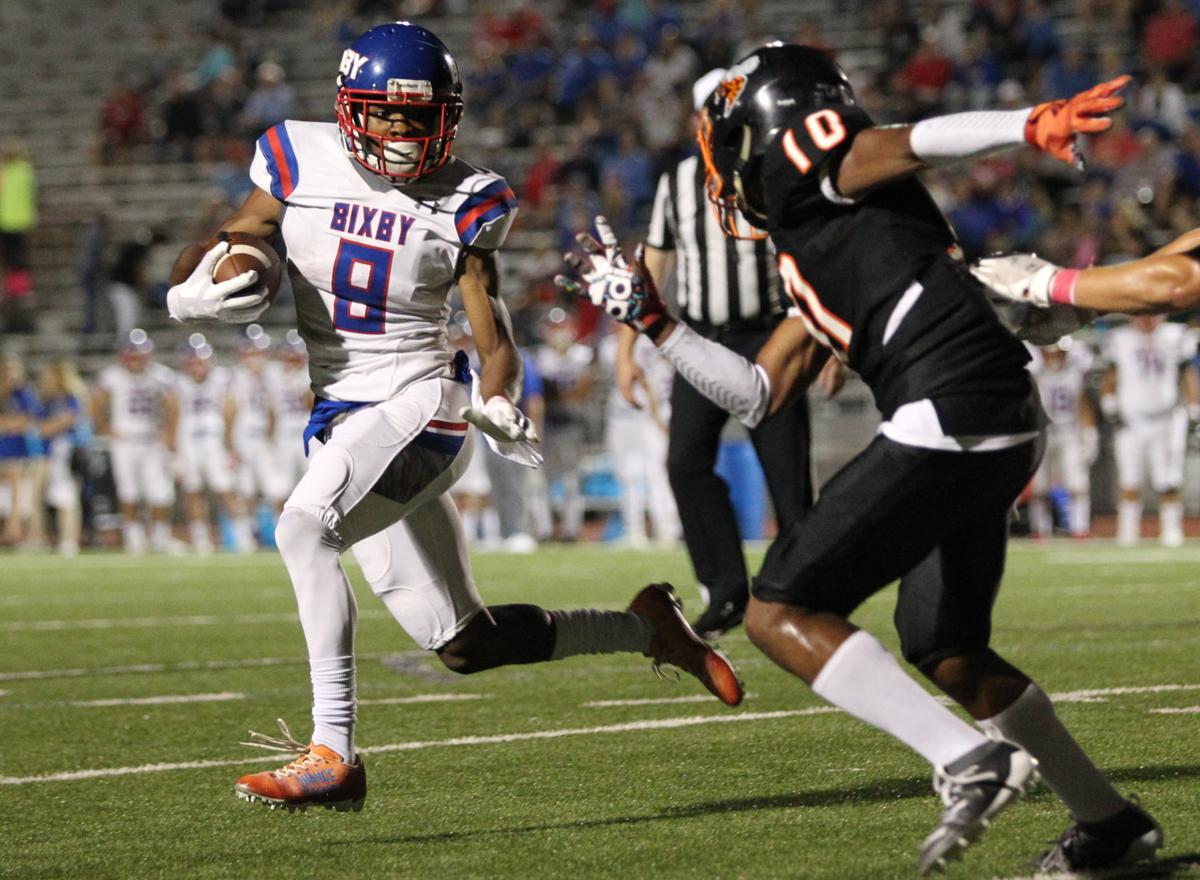 Bixby’s receiving corps has plenty of room for new standouts to emerge, and it was senior Trevon Holt’s turn Friday night.

Holt had a career-high 137 receiving yards and caught a touchdown pass as the No. 1 Spartans continued to roll with a 31-0 win at No. 4 Booker T. Washington, spoiling homecoming for the Hornets before about 5,000 fans in S.E. Williams Stadium.

The Hornets were more concerned with slowing the speedy Brennan Presley and held the Oklahoma State commit to 96 receiving yards and without a TD reception for the first time this season.

But they couldn’t stay with Holt in the process, and he burned them on four long receptions.

“They were putting man coverage on Brennan and a safety over the top because they were so worried about him,” Holt said. “(Offensive coordinator Tyler Schneider) said he was gonna go best-on-best with me and the man in front of him, and fortunately I beat him multiple times to help my team put points in the board.”

Holt caught a 28-yard pass from Mason Williams in the first touchdown drive, reeled in a 52-yarder that set up the Spartans to take a 17-0 lead in the second quarter and caught a 28-yard TD pass in the fourth quarter.

He also had another 29-yard reception from Williams and finished with a career-high six catches. He had never caught more than three passes in a game and his 137 receiving yards were only 14 fewer than his previous career total.

Braylin Presley added his ninth and 10th rushing TDs of the season, Chandler Carson crashed into the end zone from a yard out and Reis Vernon booted a 27-yard field goal as the Spartans shut out the Hornets for only the second time.

Bixby improved to 5-0 overall and 2-0 in district play and returns home to host Ponca City next week. B.T. Washington fell to 2-3 and 1-1 and plays at Shawnee next Friday.

Hornets coach Brad Calip had his best athletes — quarterback Gentry Williams and receiver/defensive back JJ Hester — on the field for the first time in three weeks.

The Hornets gave a determined defensive effort, holding the explosive Spartans to their lowest scoring total of the season — Bixby was averaging 65 points per game.

But B.T. Washington couldn’t generate enough offense to stay in the game. The Hornets also muffed their best scoring chances. Trailing 10-0 in the second quarter, they drove to the Spartans’ 35, and Williams appeared to have sufficient running room on a fourth down, but slipped and fumbled and Bixby recovered.

The Hornets put together a 17-play drive in the third quarter, but were flagged for holding on first-and-goal at the 7 and lost yardage back to the 17. Williams was sacked by Barrett Daniel on fourth down.

“We’ll meet this team again and we held ‘em to the lowest points of anybody, so without mistakes, if we don’t give ‘em turnovers and all of that, it’s a different game,” Calip said. “We’ll regroup. It’s a young team after graduating 23 seniors. We’ve gotta eliminate the mistakes and we’ll get better. We’ll kind of take a licking on this one and look at the film and get ready for the Shawnee Wolves.”

“Trevon’s been a good player for three years,” Montgomery said. “He’s been our deep snapper since his sophomore year and he made a couple of big plays on special teams in the (6A Division final in 2017). He was our third safety last year and has played a bunch of wide receiver. He’s a program kid, he’s bought in the process and really done well.”