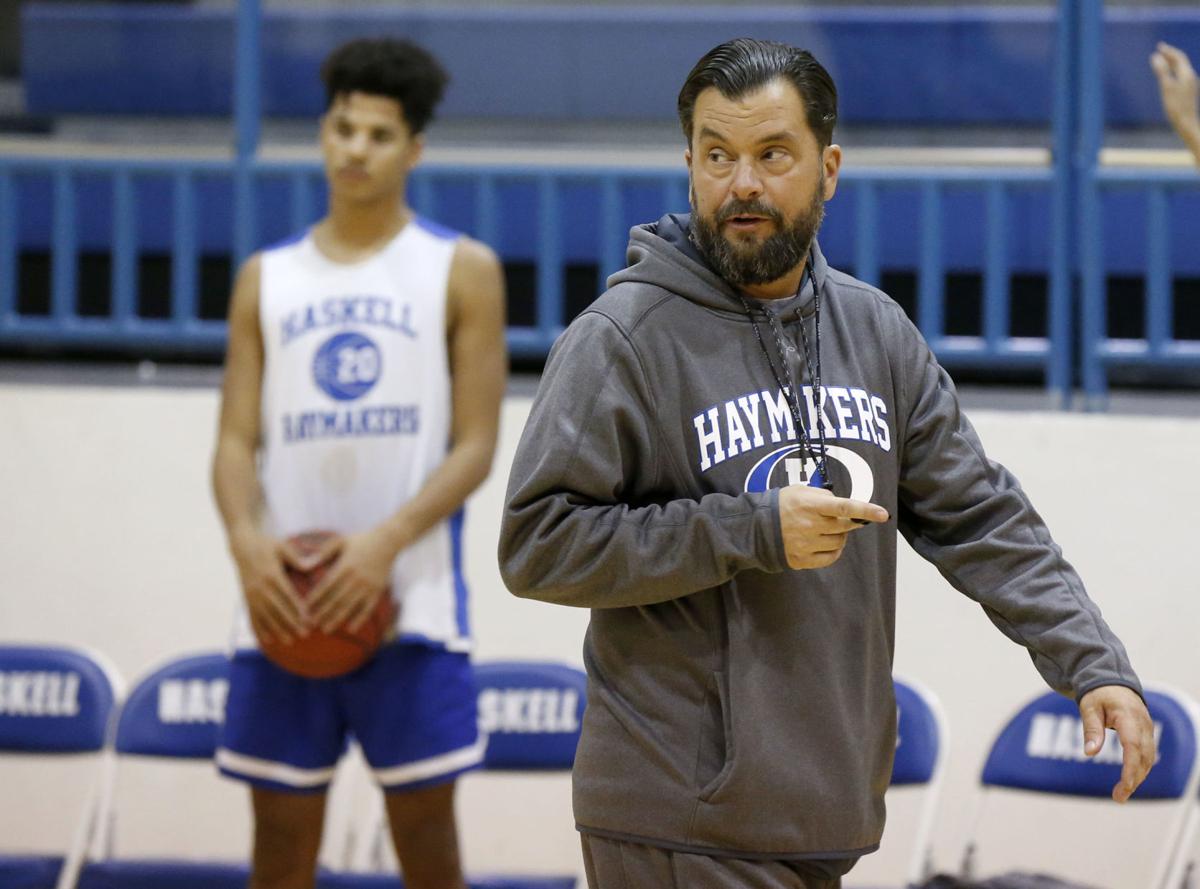 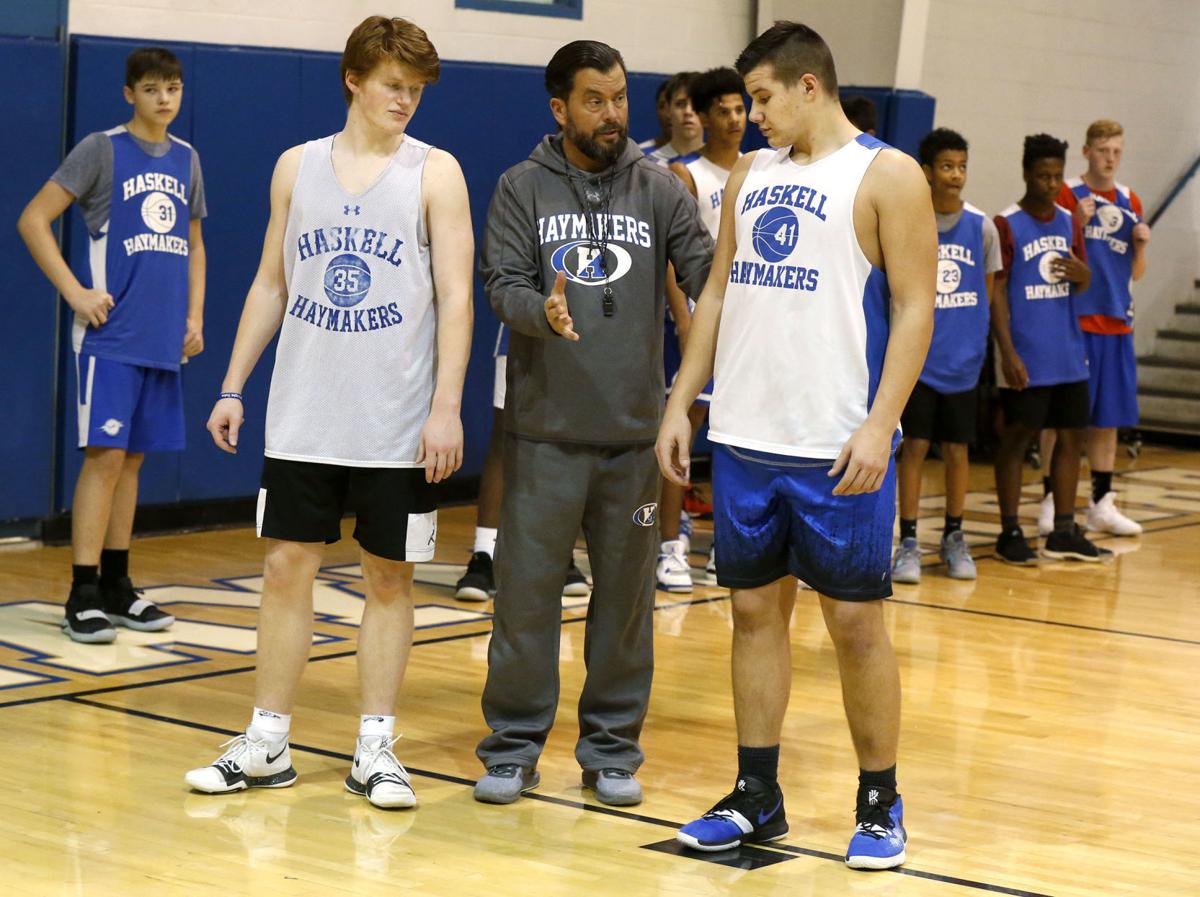 The 47-year-old Hayes is currently working on a song titled, “Widowmaker.”

Tuesday night is the one-year anniversary of Hayes’ “widowmaker” heart attack that occurred during and after a double-overtime loss at Porter. It’s a heart attack that’s caused by a complete blockage of the left anterior descending artery.

“I’m very grateful to the doctors who saved my life,” Hayes said. “I was a dead man, according to them. They said they couldn’t believe I was alive.”

On that anniversary, Hayes and the Haymakers (19-3) will be hosting their regular-season finale against Porter at 8 p.m. at the Franklin Event Center. A victory would give Haskell, ranked No. 10 in Class 3A, its first 20-win regular season.

It’s been a dramatic turnaround for Hayes and the Haymakers, who were 7-16 a year ago and played their regular-season finale without him while he was fighting for his life in St. John Medical Center.

“I don’t think any one of us wanted to play that night,” said Haskell center Zane Adams, who averages 19 points and 12 rebounds per game.

This year, the Haymakers have been winning the close games that often slipped away last year, including on the fateful night at Porter.

“The whole game I felt awful, my head was pounding, my doctor (later) told me I was having a heart attack,” Hayes said.

Hayes called 911 because he believed he had a torn esophagus, but soon learned it was cardiac related.

“My esophagus closes if I don’t take medication. I had been out of medication for 10 days-to-two weeks,” Hayes said. “I thought I had torn my esophagus, that I had punctured it eating something. I was hurting so bad. I called 911, the paramedics got their quick, and by that time I was on my knees. I thought they knew something I didn’t and they gave me Nitro under my tongue, one every 15-20 minutes. When I was in the ambulance, I felt nauseous. I asked what’s the matter and they wouldn’t tell me, probably for my own good.

“I was told (at the hospital) I was 100 percent blocked. The idea that I couldn’t see my wife and kids and mother, that would have been so tough on them. I had just lost my dad (Mike Hayes, who coached Bishop Kelley to its first three boys state tournament berths in the 1970s) a year before. I could tell the sense of urgency was sky high on their (doctors’) faces.

“It’s almost surreal that it’s happening to you. I lift, I run, I didn’t have any bad habits and I’m on death’s door. A doctor said he had seen 20 people with what I had and they all died. He said I was a miracle. Looking back I could tell I was more fatigued than I had been. I still worked out, but for the first time in my life I was sitting down, dozing off. A doctor told me many widowmaker victims pass away in their recliner or bed. I did pay attention to the fact I was hurting. The doctor said if I hadn’t called I would have died.”

There were some light moments during that medical emergency such as when a nurse recognized Hayes from his college basketball days. One of his many ICU visitors was Edison coach Michael Parish, a Northeastern State teammate of Hayes when they played for his great-uncle, Ken Hayes.

“It was touch-and-go whether he was going to make it,” Parish said. “He didn’t look well at all, he didn’t have any color in his face.”

A day after the heart attack, Hayes received four stents to clear blockages. During his playing days, he was a point-guard who was known as a fierce competitor besides being a good shooter — he made 16 treys in a 1990 game for Coweta. The competitiveness and his love for basketball was soon back on display. Four days after the heart attack he was on Haskell’s bench, but not coaching, for a 54-52 playoff loss against Commerce at Kiefer. His assistant, Paul McCrary, coached the Haymakers that night and Hayes’ uncle, former Coweta coach Henry Bias, was next to him on the bench.

“Uncle Henry said I could go to the game, but he wasn’t going to let me get up,” Hayes said. “I did get a little worked up that night, but I felt I had to be there, otherwise I would have been abandoning my kids even though I wasn’t. They needed to see me and I needed to see them.”

Hayes was re-energized by the surgery, that also strengthened his singing voice, but the heart attack has somewhat changed his coaching approach.

“Some people could argue, but I have dialed it back quite a bit,” Hayes said. “You know what’s important and what’s not. You know what hill you want to die on. I think it’s made me a better coach, understanding what you need to spend your time on, and what you don’t need to waste your time on, but the kids are the ones who make you a better coach with the ball going in the hole.”

Adams could tell a difference in Hayes when he returned after the heart attack.

“I knew Coach Hayes so I was pretty positive he would be back,” Adams said. “He’s slightly more laid back (now).”

Hayes was advised by a doctor that it might be better for his health if he left coaching, but said with a laugh, “There’s not a whole lot I can do until I hit a No. 1 single.”

Wesley Michael Hayes, a musical artist in the Texas Country/Red Dirt genre, plans to release a new album next month and expects to perform about 100 concert dates from April to November.

“I love it, when you go plug in a guitar, sit down and entertain you don’t have to worry about missed free throws and turnovers,” Hayes said. ”You might break a guitar string and hound-dog a note or two, but it’s so much easier and I enjoy it a great deal. Music, like basketball, is every day who I am.”

Hayes is in his sixth season at Haskell — the seventh high-school coaching job he’s had in his 24-year career. This season has been his most successful as a head coach. And one day, he said he might even write a song about basketball and this season.

“We’ve won two tournaments and been runner-up in another,” Hayes said. “I’m trying to take a step back and enjoy this. I’m thankful, I’m blessed.”