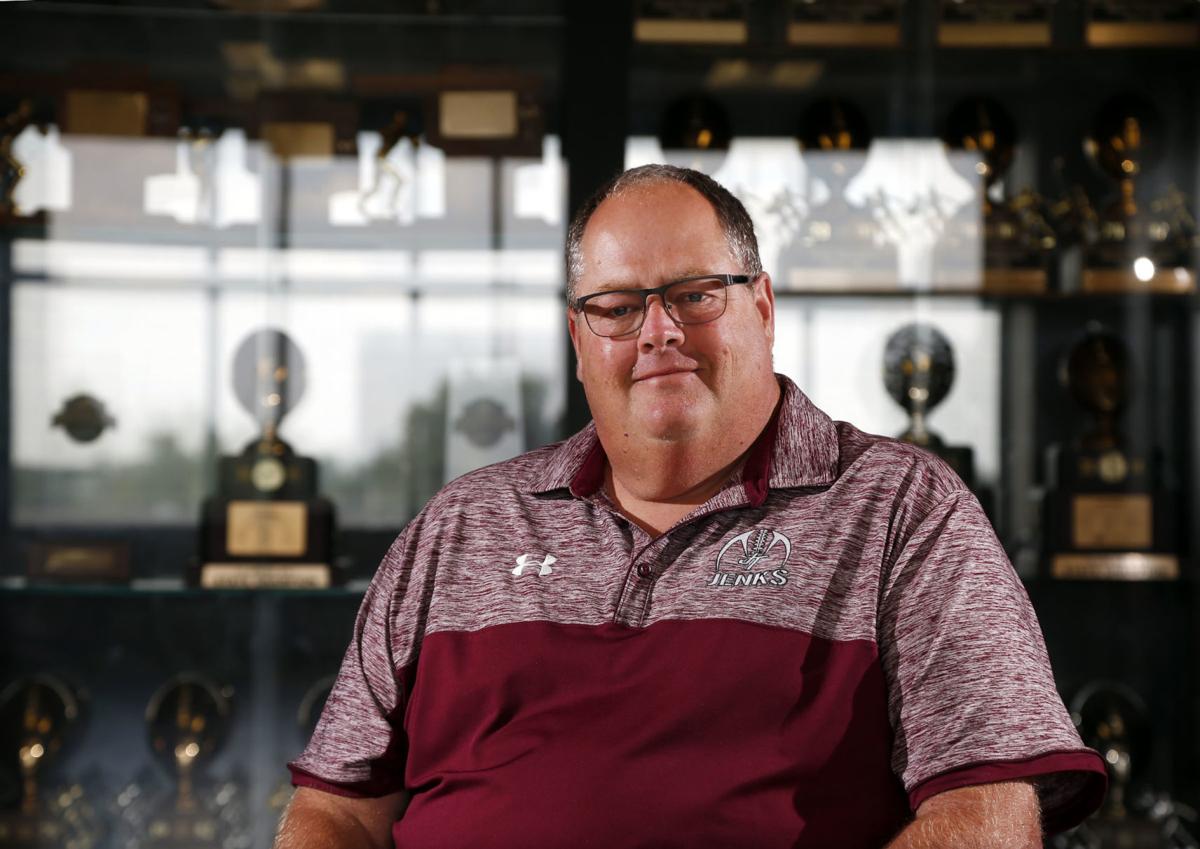 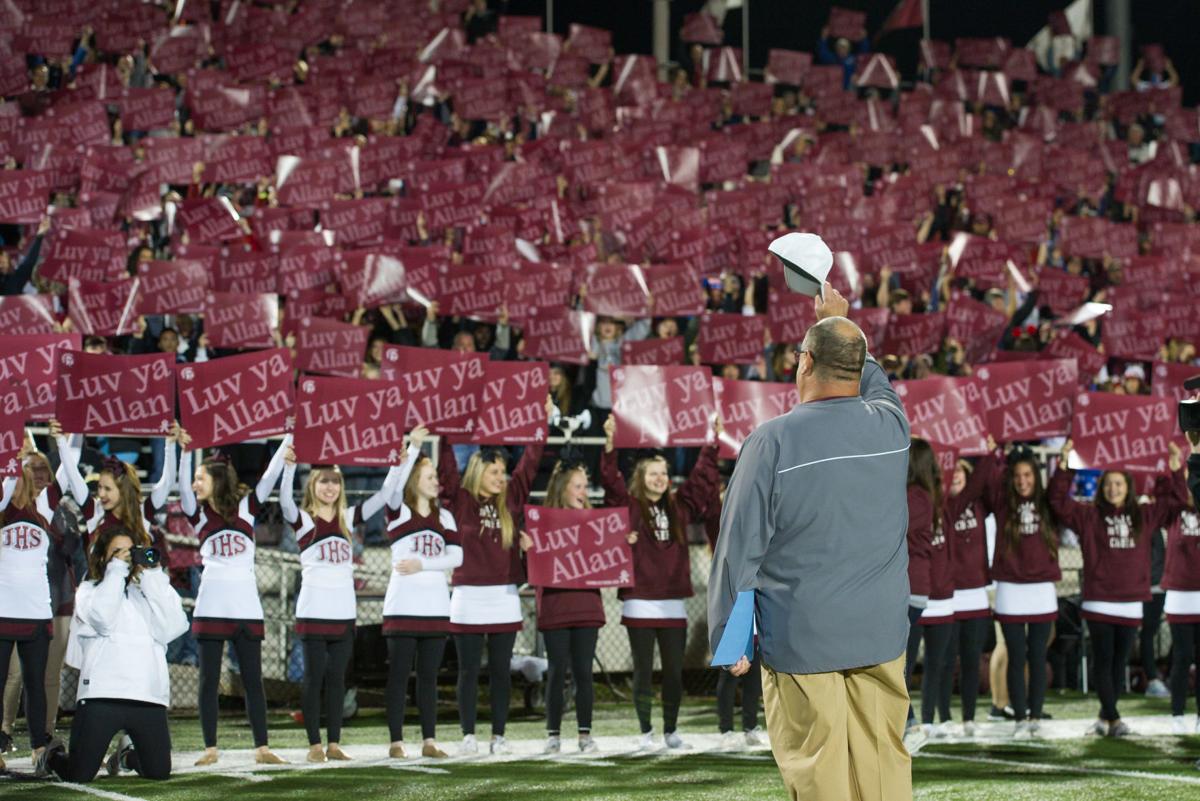 Jenks head coach Allan Trimble tips his hat to the fans after receiving a proclamation for Allan Trimble day from Jenks Mayor Kelly Dunkerley during halftime of the game against Southmoore at Dwelley Stadium in Jenks, OK on 11/11/16. BRETT ROJO/For the Tulsa World 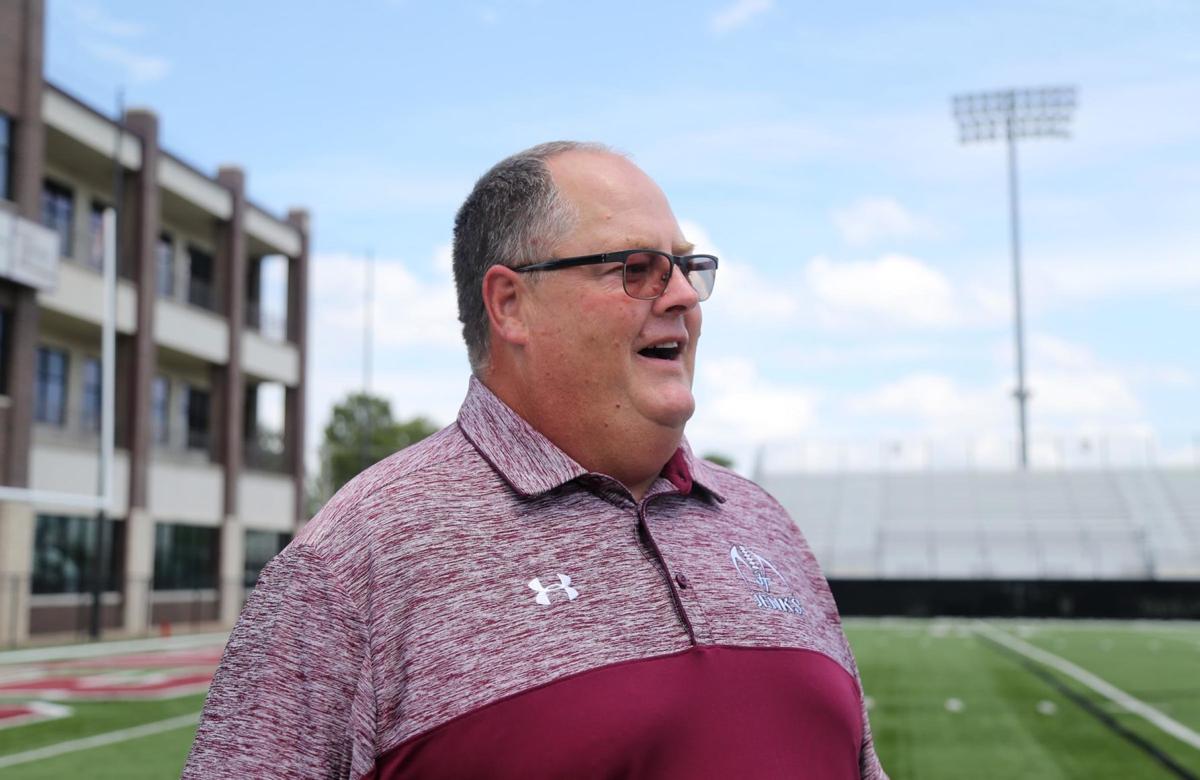 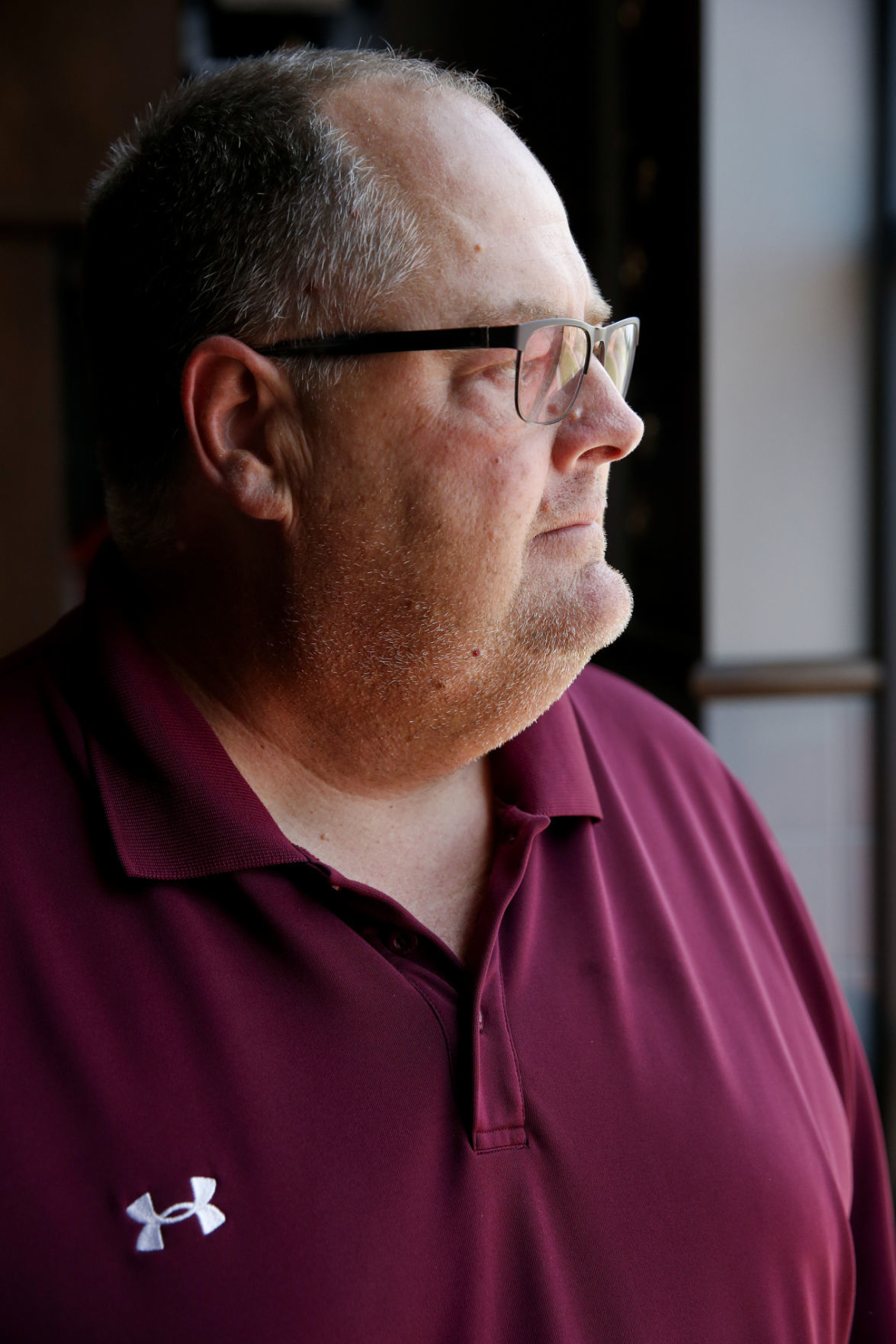 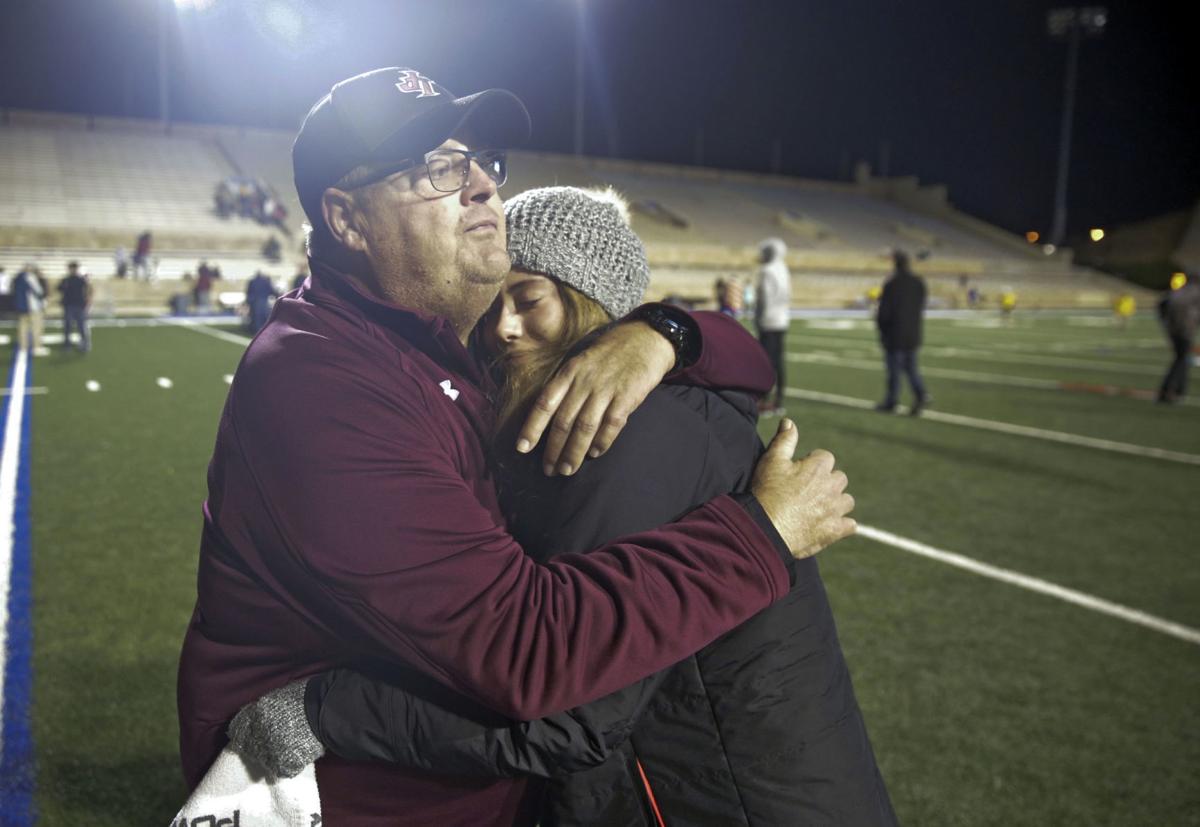 Jenks head coach Allan Trimble tips his hat to the fans after receiving a proclamation for Allan Trimble day from Jenks Mayor Kelly Dunkerley during halftime of the game against Southmoore at Dwelley Stadium in Jenks, OK on 11/11/16. BRETT ROJO/For the Tulsa World

Trimble By the Numbers

13: State championships, most by any Oklahoma head coach.

Since 2016, Trimble has been battling ALS, or amyotrophic lateral sclerosis — also known as Lou Gehrig’s Disease.

In its social media post, a Jenks Public Schools statement read: “After his courageous fight against ALS, our dear friend Allan Trimble passed away peacefully this morning at St. Francis hospital. He was surrounded by his family. His legacy of faith, family, and football will never be forgotten.”

Said Jenks Superintendent Stacey Butterfield: “Our hearts are with his family and we offer them our most sincere condolences. Allan will certainly be remembered for what he accomplished on the football field, but his legacy is in the lives of the student-athletes he mentored and all those he impacted with his example of humility, service, and courage. He lifted up everyone around him and he will be greatly missed by so many in our community.”

Trimble is survived by his wife, Courtney, and his two daughters, Tylar Isenberg and Tori Trimble.

In April 2018, Trimble retired as head coach and director of football almost two years after he was diagnosed with ALS. Trimble was succeeded by longtime assistant Keith Riggs.

“We all knew this day was coming with Allan’s diagnosis back in 2016,” Riggs said Sunday during a news conference at the Sharp Athletic Center on the north end of Allan Trimble Stadium. “But you’re never really prepared for it. It’s been a difficult day on many people. Allan touched so many lives throughout his time here, but as Courtney mentioned today she really wants it to be a celebration and a remembrance and rejoicing of Allan’s life, and all he did for those around him.”

In August 2017, the home of the Trojans was officially re-named Allan Trimble Stadium. One month later, Jenks Public Schools and the city of Jenks dedicated a section of B Street, which runs through the Jenks High School campus, as Allan Trimble Way.

“Allan’s heart was always in the right place,” said Mike Means, site principal at Jenks High School from 1993 to 2016, in a news release. “He was a man of great faith, and he used football as a platform to teach so many young men how to be better people. He emphasized character above everything else, and he will always be remembered here in Jenks for not only creating a winning tradition, but for being a positive role model to everyone he met.”

Trimble had a 242-41 overall record and his Jenks teams made 17 state finals appearances. The Trojans only missed reaching the semifinals of the state’s largest classification twice under him, losing earlier in the playoffs on each occasion.

Trimble said about his time as Jenks’ coach, “It’s like the last 22 years were 30 minutes. When you go back and think about it, you couldn’t write the book on how many great people have crossed paths with me and how blessed I am to have a good job with a good school district, to have a family that’s put up with my career. You can never be negative about that. It’s blessings beyond measure.”

His first state title as a head coach was with the Jenks girls track team in 1995.

Trimble, born Aug. 14, 1963, was a graduate of Cleveland High School and Northeastern State. After starting his career as Owasso’s linebackers coach in 1987, Trimble moved to Jenks as an assistant in 1990 and was named offensive coordinator in 1993, helping the Trojans win a state title that season. He led the Trojans to Class 6A state titles in his first six seasons as head coach.

Trimble received the 2017 Power of Influence Award from the American Football Coaches Association. In 2018, he was inducted into the Oklahoma Sports Hall of Fame and was No. 15 on MaxPreps’ 50 Greatest High School Football Coaches of All-Time.

In 2016, Trimble was one of two winners of U.S. Cellular’s nationwide first Most Valuable Coach award.

Two weeks ago, Trimble along with Stillwater baseball/football standout Matt Holliday, were announced as the Oklahoma Secondary School Activities Association’s 2020 nominees to the National High School Hall of Fame.

Services are pending. The family has requested that anyone interested in donations in his memory that those be made to the Trimble Strong Foundation.

“Even through his illness, it was always about other people, it was never about him or his disease. The times I was able to visit with him this past week he wanted to know about the team, how they were doing, how preparations are going,” Riggs said, referring to Jenks playing in the 6AI state title game against Owasso on Saturday night in Edmond. “His foundation is a wonderful example. He started a foundation to help other people ...

“He walked the walk and lived it.”

+107 Gallery: Allan Trimble memorial service and a look back at his Jenks football career