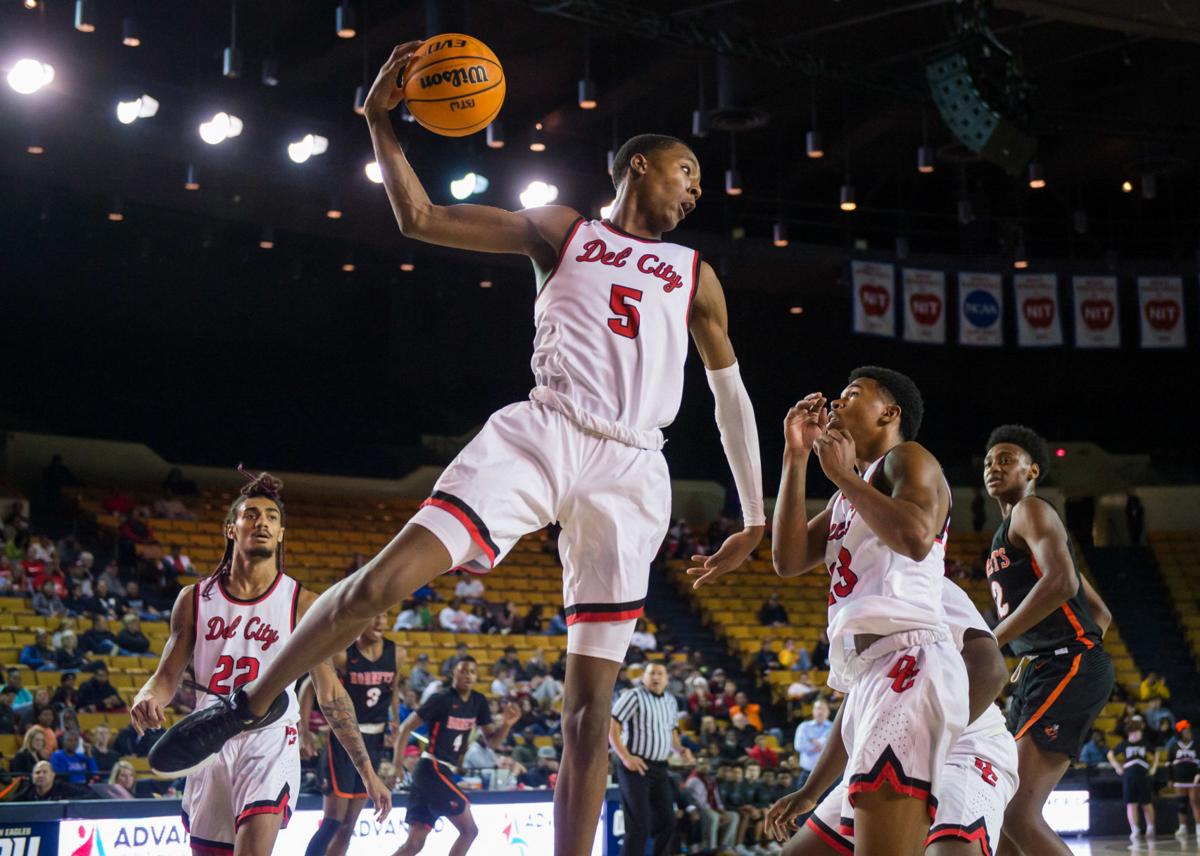 Del City’s Keyondre Young pulls down a rebound during the Tournament of Champions finals against Booker T. Washington at ORU’s Mabee Center on Saturday. BRETT ROJO/for the Tulsa World 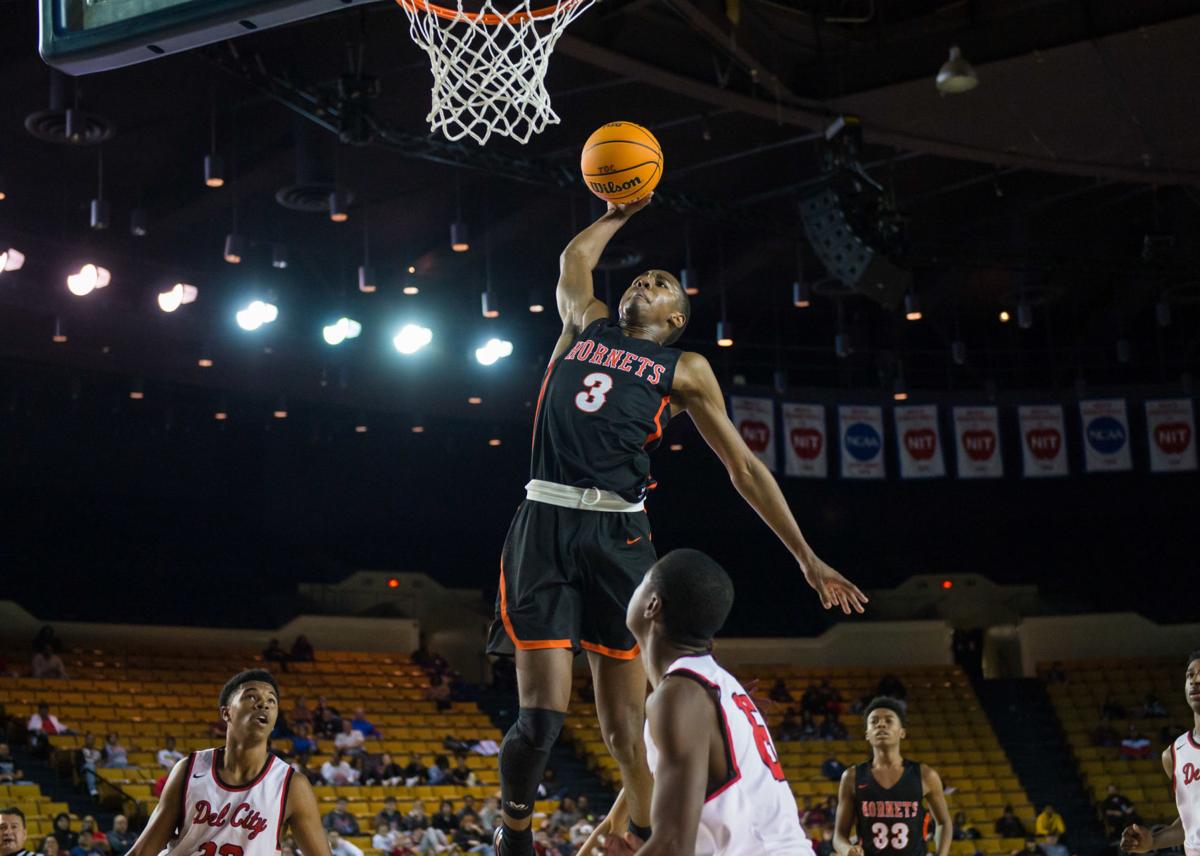 Booker T. Washington’s Bryce Thompson goes up for a dunk during the Tournament of Champions finals against Dell City at ORU’s Mabee Center in Tulsa, OK on 12/28/19. BRETT ROJO/for the Tulsa World

Del City’s Keyondre Young pulls down a rebound during the Tournament of Champions finals against Booker T. Washington at ORU’s Mabee Center on Saturday. BRETT ROJO/for the Tulsa World

Booker T. Washington’s Bryce Thompson goes up for a dunk during the Tournament of Champions finals against Dell City at ORU’s Mabee Center in Tulsa, OK on 12/28/19. BRETT ROJO/for the Tulsa World

Del City’s second visit to the Mabee Center in 2019 ended a lot sweeter than its first.

And the reverse can be said for Booker T. Washington.

Nate Goodlow had 24 points, nine rebounds, seven assists and four steals to lead the Class 5A No. 1 Eagles past 6A No. 1 Booker T. Washington 67-54 in the 55th annual Tournament of Champions title game Saturday night.

Del City (7-0), which lost to Memorial in the 5A state final in March at Mabee Center, rallied from an early 14-point deficit against the Hornets, who won the 6A state final in the same arena last season.

“Booker T. Washington is really good, but I know our guys, they fight and don’t quit,” Del City coach Lenny Hatchett said. “I knew we were down at half, but I told them at half if we can continue to keep pressuring them and have to make difficult shots, I think we can wear them down a little bit. I thought our bench helped us out a lot more tonight — and our overall team defense.”

BTW coach Conley Phipps II predicted before the game his team would need to take care of the ball in order to win, and it struggled doing that against an aggressive Eagles defense. The Hornets committed 19 turnovers compared to only six for Del City.

"We're a defensive team," Goodlo said. "We get our offense from our defense. We knew we had to turn it up defensively in the second half and we got the job done."

Late in the third quarter, Javeon McCalister’s three-point play gave Del City a 44-42 lead it would not relinquish. The Hornets could not overcome losing center Jalen Breath, who had only two points in 12 minutes before fouling out late in the third.

Del City led 52-44 early in the fourth, but after Trey Phipps made three free throws with 3:38 left, the Eagles’ lead was cut to 55-54. But McCalister answered with a basket and Goodlow then came up with a steal that led to Sherod Davis’ layup as Del City scored the final 12 points.

McCalister, in his first start, added 20 points for the Eagles.

Trey Phipps led the Hornets with 26 points and Bryce Thompson scored 19 — but they were held to 14 in the second half.

"We got off to a great start and then they out-toughed us down the stretch," Conley Phipps II said. "You have to give Del City a lot of credit. We had some things go against us and we didn't respond to the adversity very well."

”Third-place games are about character,” Memorial coach Bobby Allison said. “Heritage Hall had it and we had it, too. Both teams turned this game into a championship-level environment and that’s a credit to both. We really got something out of this.”

Memorial has won its last two TofC third-place games after losing eight of its previous nine over a 30-year span.

Trey Alexander had 22 points and 10 rebounds for Heritage Hall (7-3), but was shut out in the fourth quarter. Memorial’s lead was 59-57 before Will Hill drove for a layup with 1:18 left that ignited a 9-0 run that ended the game.

”And he got a huge strip on Alexander,” Allison said. “Will Hill guarded him the entire fourth quarter.”

Abilene Christian signee Jameson Richardson had 28 points and 14 rebounds to lead the Class B No. 1 Tigers (10-1) past the 2A No. 7 Panthers (6-3) in the fifth-place game. Mason Rice’s three-point play with 1:31 left in the third quarter gave the Tigers a 36-34 lead they didn’t relinquish.

For Duke, the game was similar as Friday’s win over Oklahoma City Millwood as the Tigers trailed early before pulling away in the fourth quarter.

Now that high school football and the holidays are past us, it's time to catch you up on high school basketball. We're only a little more than…