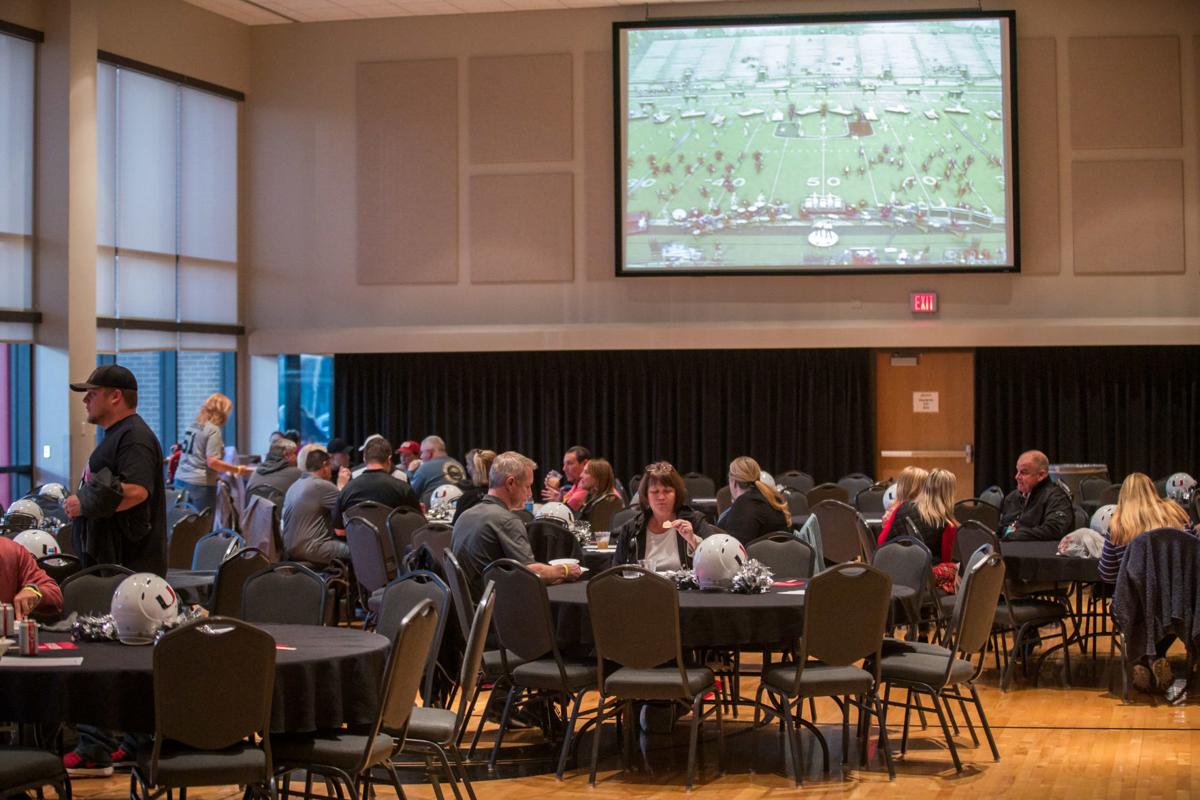 Fans eat in the Turf Club before the Moore-Union football game at Union-Tuttle Stadium on Oct. 17 in Tulsa. BRETT ROJO/for the Tulsa World 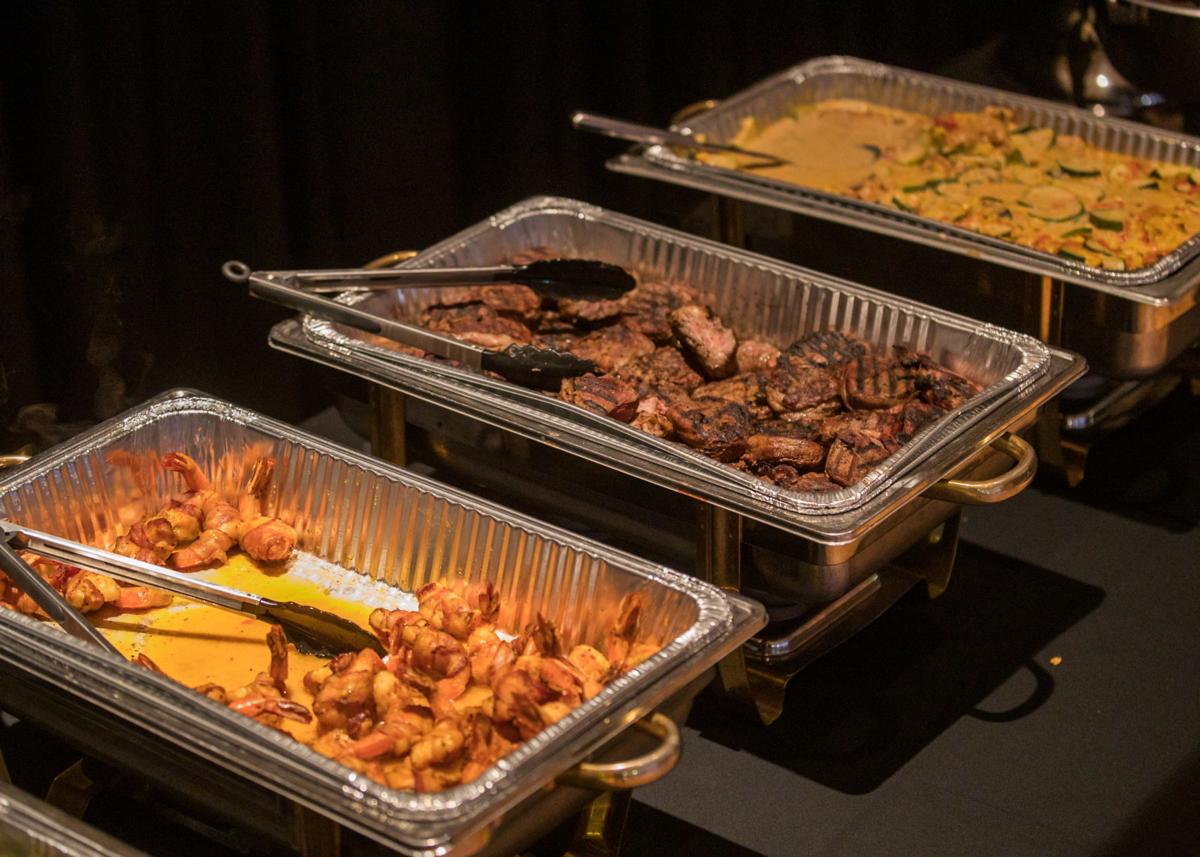 Trays of food await fans on a table in the Turf Club before the Moore-Union football game at Union-Tuttle Stadium on Oct. 17 in Tulsa. 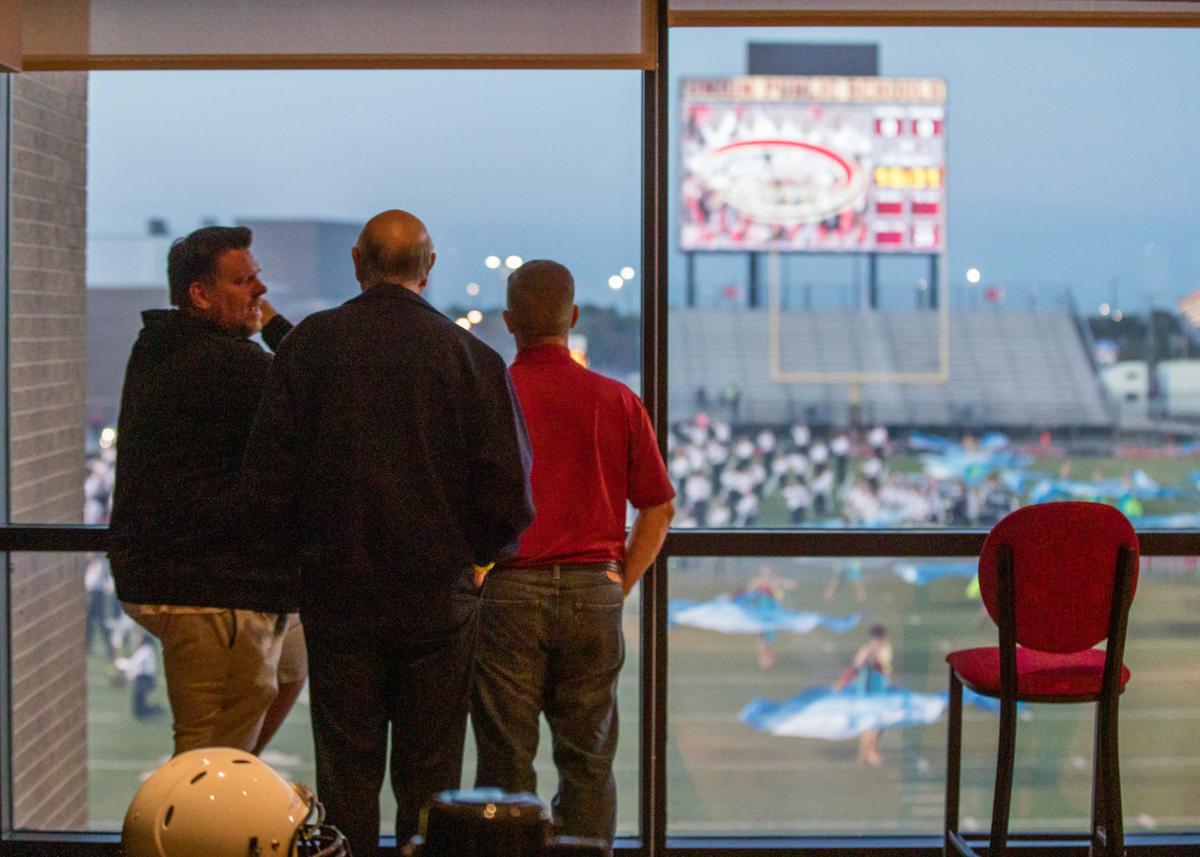 Fans watch the band perform in the Turf Club before the Moore-Union football game at Union-Tuttle Stadium on Oct. 17 in Tulsa. BRETT ROJO/for the Tulsa World 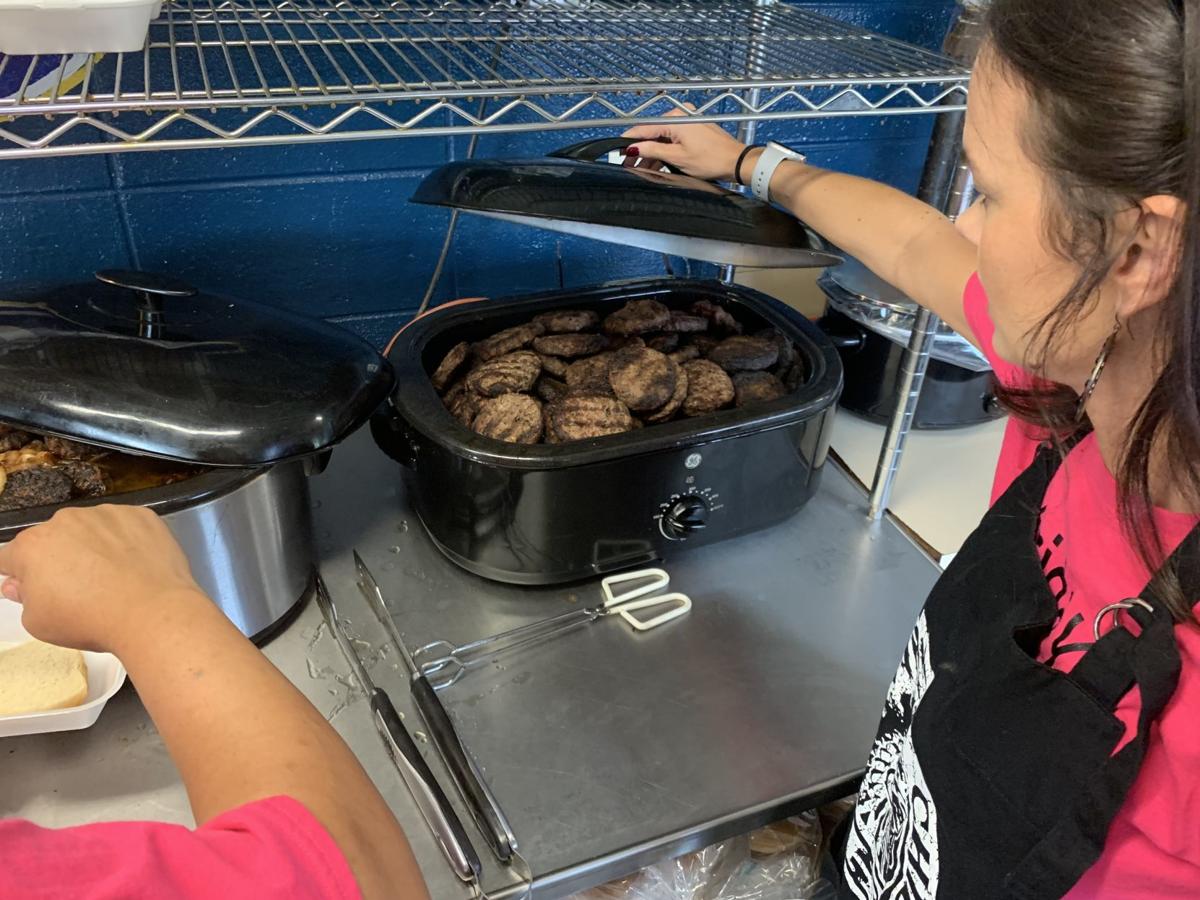 Ashlen Bryant lifts a slow-cooker lid to unveil the patties for the famous “Berryhill Burger.” 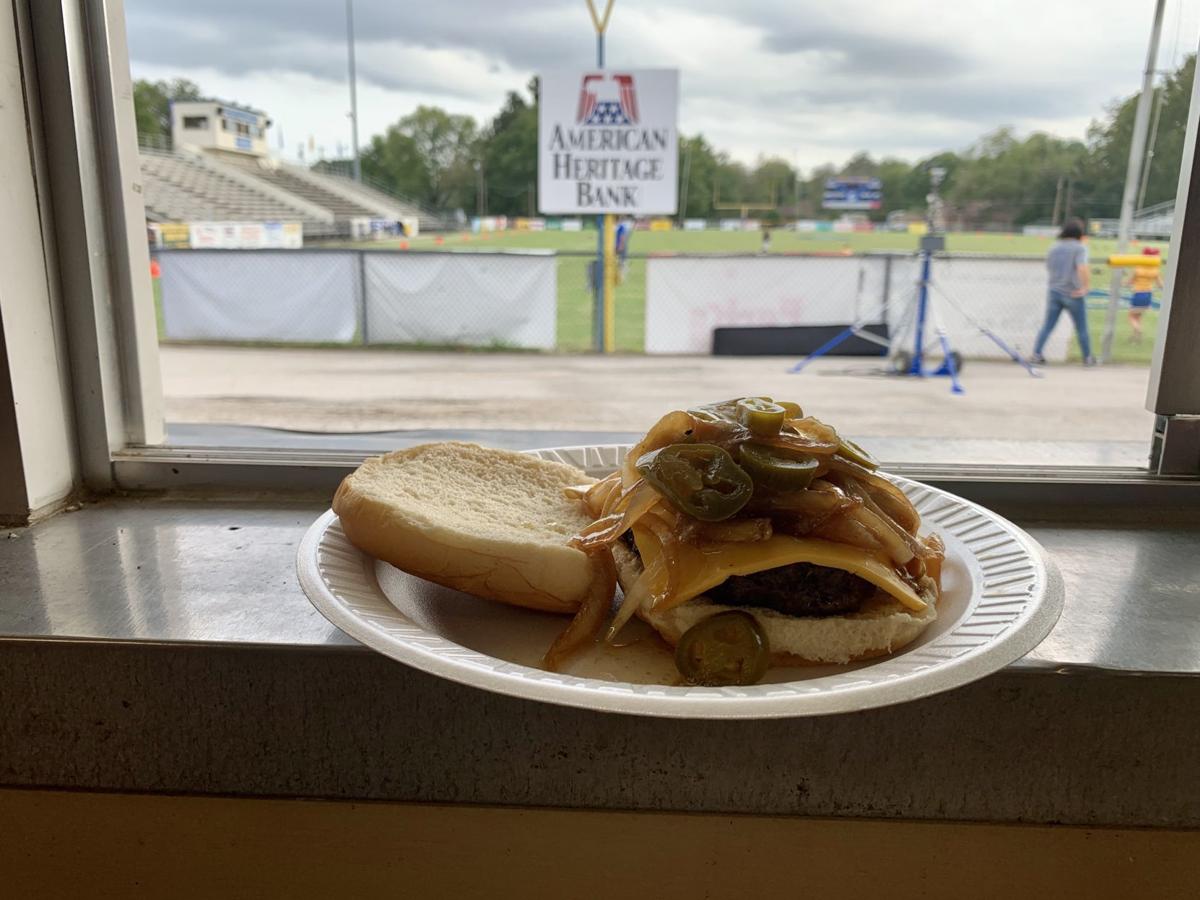 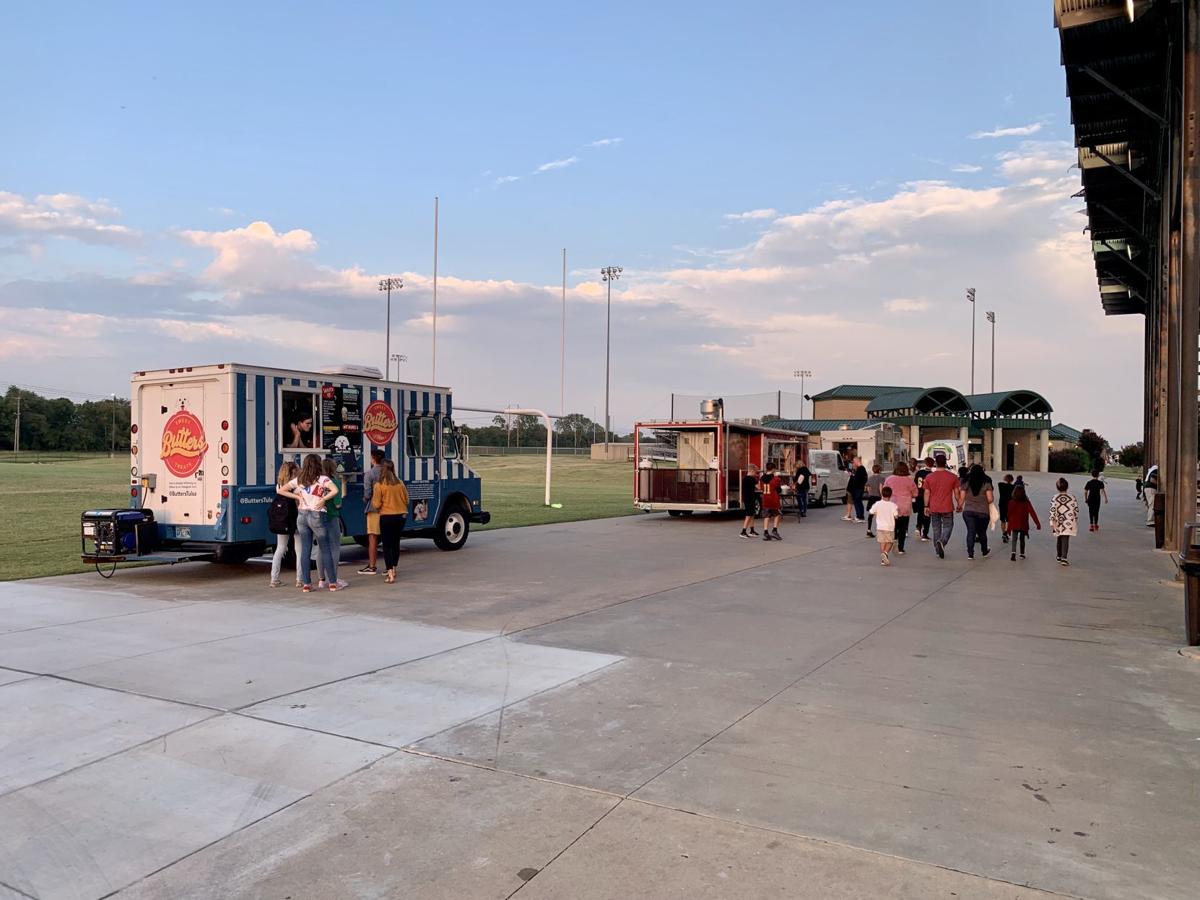 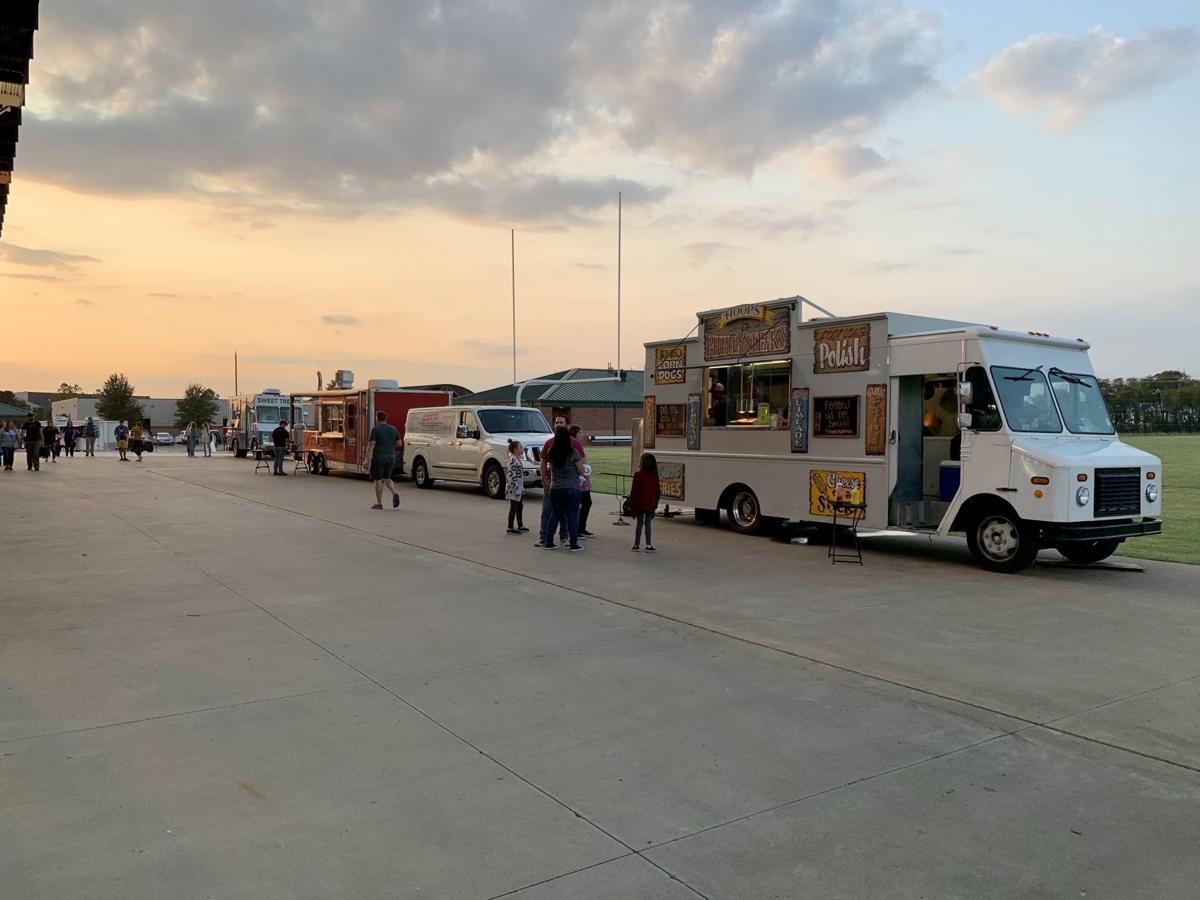 Fans eat in the Turf Club before the Moore-Union football game at Union-Tuttle Stadium on Oct. 17 in Tulsa. BRETT ROJO/for the Tulsa World

Trays of food await fans on a table in the Turf Club before the Moore-Union football game at Union-Tuttle Stadium on Oct. 17 in Tulsa.

Fans watch the band perform in the Turf Club before the Moore-Union football game at Union-Tuttle Stadium on Oct. 17 in Tulsa. BRETT ROJO/for the Tulsa World

Ashlen Bryant lifts a slow-cooker lid to unveil the patties for the famous “Berryhill Burger.”

BERRYHILL — Courtnie Fields has been at Berryhill’s football stadium since about 2:30 p.m. this particular Friday. The Chiefs don’t kick off until 7 p.m., but 2:30 is when the onions needed to be cut.

“Make sure you stress that it’s all about the onions,” Fields says when introducing Ashlen Bryant.

Bryant is the only person in the concession stand who knows the recipe for the sautéed onions credited for making the “Berryhill Burger” famous.

Fields opens the large metal door to the concession building to unveil a cramped space featuring two aisles, separated by a large cement wall and countertop. The counter features the same goodies every other concession does at a high school football game: Skittles, a half-full popcorn machine, empty plastic trays used for chips and nacho cheese. Then there are the three large slow cookers in the center of everything.

An older man pokes his head through the window to request a Diet Coke and a famous “Berryhill Burger.” While Fields scurries to the cooler for the Diet Coke, Brigitte Postoak opens the slow-cooker lids to place a patty, then cheese, then sautéed onions, then jalapeños between two buns.

“You have to get one of these here every game,” the man says, lifting up his burger on a paper plate.

It’s the first of about 300 “Berryhill Burgers” that will be sold during a typical game.

“Refs are known to request our games just so they can get a ‘Berryhill Burger,’ ” Bryant brags.

When the Tulsa World sent a mass email to school officials and shared a tweet asking for unique food options at Tulsa-area football stadiums, the “Berryhill Burger” was the first notable suggestion. Berryhill is one of several local high schools using food to enhance Friday night experiences at football games.

Owasso partnered with FanFood so fans can use an app to order from the concession stand on their phones this season to avoid lines and not miss any action. Union has its Turf Club and Redzone for a VIP pregame meal.

Kelly Birch, whose husband, Trandy, is an administrator at Lincoln Christian, is in charge of concessions at Bulldogs football games.

“(Trandy) wanted to have a really cool atmosphere out here and just a festive atmosphere,” Birch said. “People love the fair and food trucks — it’s kind of related. We just wanted something different for our people to be able to come out and just have a variety of stuff to choose from …

“It adds just a different festive atmosphere than the typical football game. We just try to make it festive. Our goal is just to make a place where families can come and just really enjoy being here.”

‘Trying to help the overall experience’

Fans go early to watch the Union Redskins, even on a Thursday night during Fall Break.

For an extra cost, the Union Redzone and the Union Booster Club’s Turf Club provide VIP dining options for fans before every home game.

Behind the south end zone at Union-Tuttle Stadium, tables covered with team decor are scattered around a room at the end of a hallway in the Union Multipurpose Activity Center that houses the Redzone. Two walls are lined with a makeshift buffet featuring filet mignon and shrimp wrapped in bacon, stuffed with green bell pepper.

Union has had the Redzone since 2003. Season membership for the Redzone is $250, which includes a pregame meal, general admission to every home game and a parking pass to the Reserved VIP lot.

To get in, you must check in at the table just outside the door, your name must be crossed off a list and a band is wrapped around your wrist. The wall across from the entry is home to a large projection screen displaying pregame festivities as kickoff nears. The screen also shows the game if fans don’t want to find a seat in the stands or avoid whatever weather Oklahoma conjures up that night.

Adjacent to the entry is a wall made up of windows overlooking the field. On the other side of the clear glass is another viewing option — a balcony perched just above the end zone.

“People want to be part of that game-time experience,” said Steve Dunlap, associate director of athletics at Union. “They’re around their friends, family. When people either eat at the stadium or eat in the Turf Club or the Redzone, that helps take care of that. I think it just makes them feel more part of the team that way.”

While Union is giving fans extra dining options before games, Owasso is trying to make sure spectators can eat during the action without missing any of it.

This season, Owasso launched the FanFood app at its home games. The FanFood app allows fans to order concession food from their seat. When the order is ready, fans get a notification and pick up their food at a separate window — no waiting in line.

Jeff Harrington, who used to manage concessions for the Rams, first brought the idea to Owasso.

“I was wondering how I can shorten the lines, because they just last forever,” Harrington said.

After some research, Harrington discovered FanFood. He said Owasso was the first in Oklahoma to use FanFood at events, but soon, the app will also be used at the BOK Center. And, eventually, fans in certain sections will be able to get their food delivered to them at Owasso football games through the app.

Although Harrington started the process, Joe Walker was in charge when FanFood first launched at an Owasso football game this season.

“For us, it’s a way that we’re trying to help the overall experience that people have when they come for concessions,” Walker said.

‘Because we love the team’

Bryant didn’t get to watch much of Berryhill’s 62-6 thumping of district foe Locust Grove. There’s constantly someone standing in the way of her view, asking for one of those “Berryhill Burgers” that were finished grilling and ready to serve before Locust Grove even arrived and stepped off the bus.

Bryant hasn’t seen much at all of the Chiefs’ 7-0 season. But, as a volunteer, the team’s success is her reward.

“We just do this because we love the team and coach (Pat) Harper,” Bryant said.

Bryant said many people still volunteer to help in the concession stand long after their kids graduate and their playing days end. Some have even stayed long enough that their grandkids start playing.

It goes back to what Dunlap said about Union fans wanting to find a way to feel closer to the team. At the end of the day, fans spend their Friday nights at high school football stadiums because of what’s on the field. But as fans expect the product on the field to be better each season, so should be the products throughout the venue.

“Our main product is the football game,” Dunlap said. “But we also have our spirit groups, cheer, pom and dance. We have an outstanding band, as well. We just want everybody to feel as involved as possible and feel a part of things, and give them opportunities to bring guests and maybe show them our stadium and our traditions and things like that and just be a big part of the whole program.”