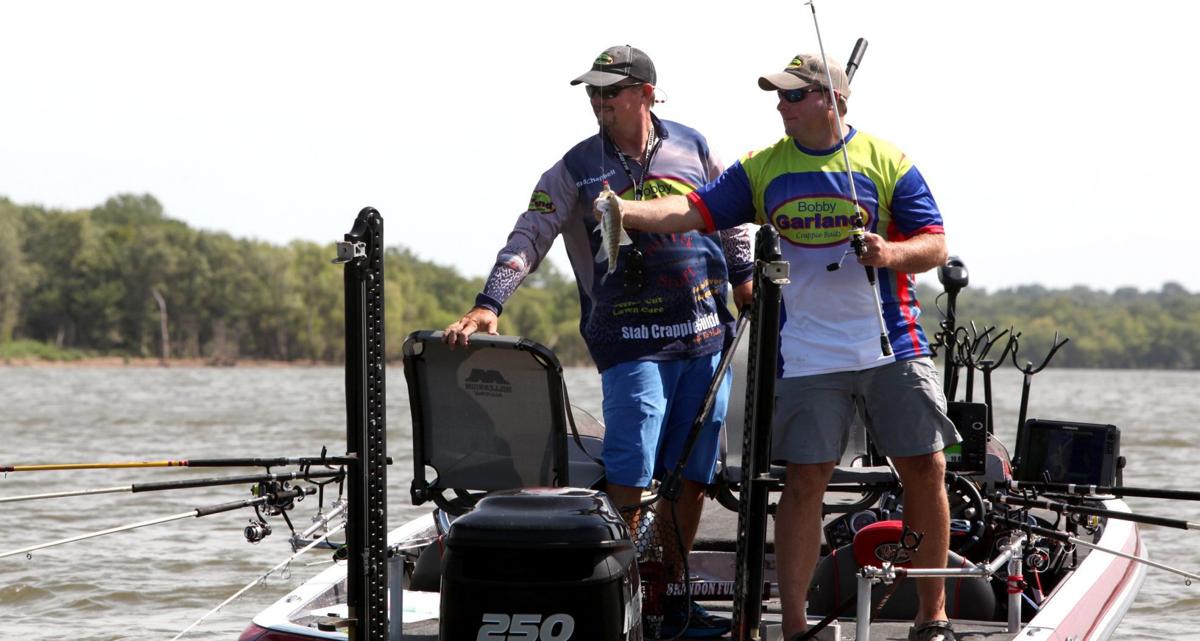 Brandon Fulgham (right) holds a crappie for a photographer while he and Brad Chappell (left) were long-line trolling on Oologah Lake on Monday. Long-lining is a technique that has become popular with anglers in the South. KELLY BOSTIAN/Tulsa World 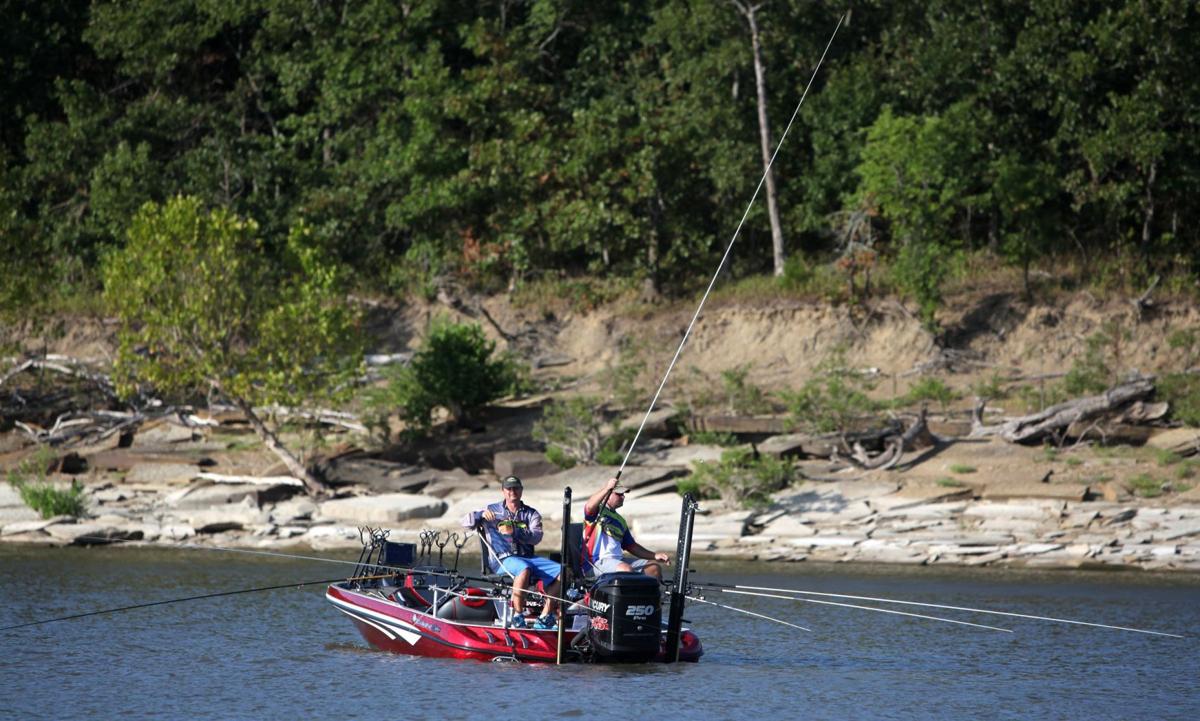 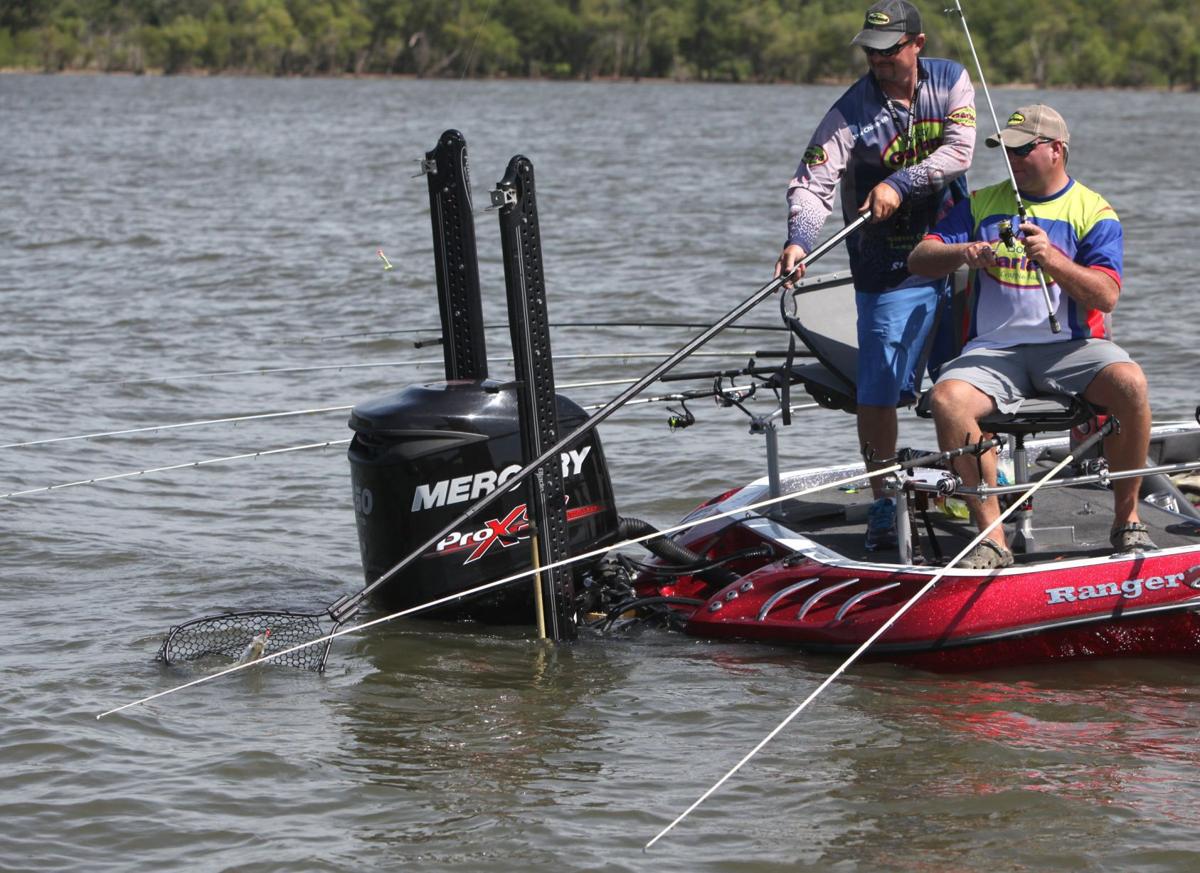 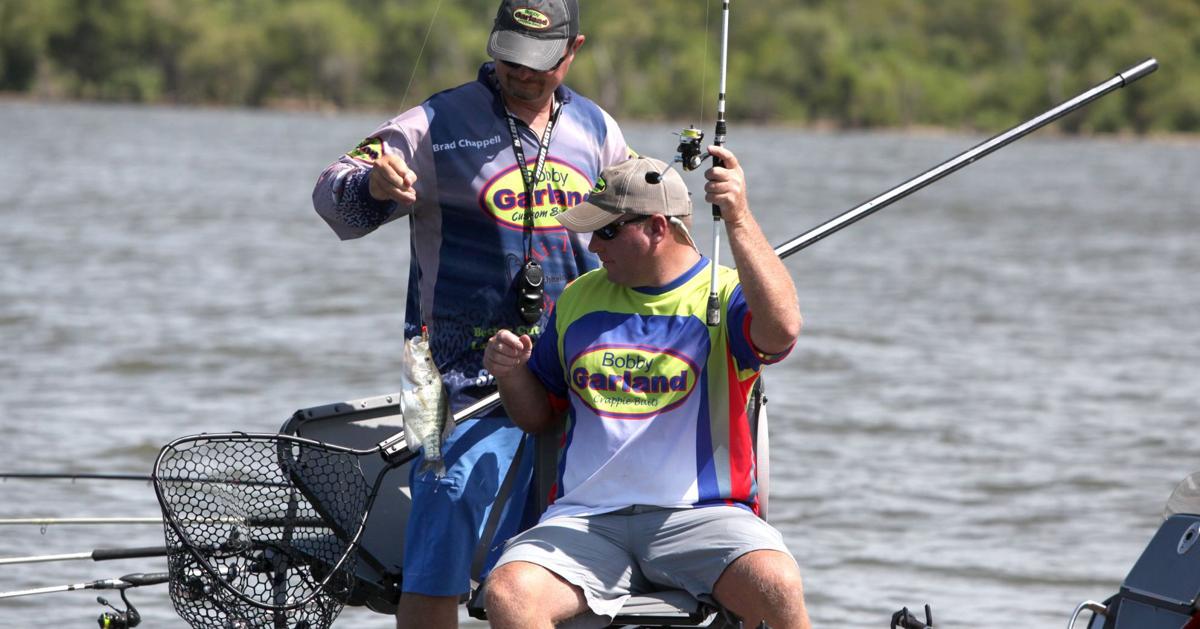 Brad Chappell (left) and Brandon Fulgham do some long-line trolling on Oologah Lake. Neither guide had fished in Oklahoma before this trip. KELLY BOSTIAN/Tulsa World

Brandon Fulgham (right) holds a crappie for a photographer while he and Brad Chappell (left) were long-line trolling on Oologah Lake on Monday. Long-lining is a technique that has become popular with anglers in the South. KELLY BOSTIAN/Tulsa World

Brad Chappell (left) and Brandon Fulgham do some long-line trolling on Oologah Lake. Neither guide had fished in Oklahoma before this trip. KELLY BOSTIAN/Tulsa World

Crappie on the banks, in the brush piles, around the docks; Oklahomans know where to find their favorite fish for the fry pan sure as they know the dirt under their fingernails is red.

But a couple of professional crappie guides from Mississippi rolled into town this week with a different kind of idea.

“I’ll bet the biggest crappie in (Oologah) Lake is sitting out there in the middle and has never even seen a jig,” guide Brad Chappell said.

Chappell and fellow Mississippi guide Brandon Fulgham fish on some of the nation’s top-rated slab lakes — Grenada, Ross Barnett, Saridis, Washington — where 2-pounders are common. They use spider rigs, and single-pole methods, dock shooting and other techniques Oklahomans also use to catch crappie, but they specialize in what they call “long-lining,” a technique they say is common across the South and will soon be popular here, as well.

The pair accepted a challenge from Tulsa sponsor Gene Larew Baits, maker of Bobby Garland soft plastic crappie baits, to try Oologah Lake on Monday with their long-line trolling technique. Neither had fished anywhere in Oklahoma before and their information on the lake was to be limited to whatever they could learn from folks at the boat ramps, along the lakeshore or on the web forum crappie.com.

They shared the results of their day on the Bobby Garland Facebook page and then met with about 60 interested fishermen that evening at Bass Pro Shops.

With a simple description, most Tulsa-area anglers would call their technique “trolling” because they’re simply pulling baits behind a boat using their speed and the size and weight of the baits to control the depth.

The long, 18- and 16- and 12-foot rods strapped to the side of their boat and the long-handled landing net on the deck is something most Oklahomans would find new, however.

Seeing the boat on the water with two guys seated on the back deck with eight poles 9 to 18 feet in length in rod holders, each trailing lines 50 to 60 feet behind the boat?

That’s not the typical trolling setup you’ll see in Oklahoma.

It can be highly effective. Why stop and jig over a brush pile at 12 feet when you can pull 16 jigs over several brush piles located along a ridge at 12 feet or, better yet, find suspended fish chasing schools of baitfish in the middle of the lake, where few crappie anglers cast a line.

The guides caught crappie off suspended schools in water 15 to 25 feet deep Monday. Most were schooled along ridges, some were near brush piles, most were not.

Long-line trolling is becoming more and more popular across the South because it is an effective and fun way to fish, Chappell said.

“You can learn a body of water really fast, and I can take anyone from 3 to 93 and their skill level doesn’t matter. The bites are easy to detect and they get to fight the fish all the way back to the boat,” he said.

With practiced hands and knowledge of their boat and rigs, the guides started out exploring Oologah with a variety of bait sizes, colors and depths. With eight rods, 16 baits and a multitude of Roadrunner jig heads and Bobby Garland Stroll’R baits, they had plenty of options.

They started out with a variety of bait colors and depths, and then narrowed the field as they caught fish and figured out what the crappie seemed to want. The bite can change by the day, sometimes by the hour, they advised.

“That’s the biggest part of it, figuring out your speed and depth,” Fulgham said.

The way to learn is to pick a flat or gently sloping portion of the lake and test speed and jig combinations, and adjust your speed until the jigs begin to hit bottom at that chosen depth.

The guides’ most effective lines Monday were the ones with 1/8th- and 1/16th-ounce Roadrunners with Bobby Garland Bluegill Fire or the new Gold Member colors. At about 1 mph, the baits covered a range about 12 to 13 feet deep.

The long poles, a 36-volt Minn Kota trolling motor powered by a heavy battery and controlled with a hand-held i-Pilot remote, and top-notch electronics help the guides long-line professionally for crappie.

“You can start out with any pole you’ve got,” Fulgham said. “A lot of guys back home chunk ’em out the back with some 6-foot rods and take off.”

Following are a few tips on long-line fishing for crappie from Mississippi guides Brad Chappell and Brandon Fulgham.

The rods: Four medium to medium-light Denali rods of 18, 16, 12, and 9 feet, with tips about 1 foot above the water in Driftmaster rod holders can be arranged on each side to help create a manageable spread. White poles can make it easier to detect bites.

Sweeping turns: With so much line behind the boat, wide sweeping turns always are necessary to avoid tangles.

Motor power: Any kind of motor can work. What the guides use is a 36-volt Minn Kota on a 31M-series deep-cycle battery controlled by an i-Pilot remote.

Side-by-side: The guides use a Dub-L-Seat chair at the back of the boat for comfortable seating while trolling.

Jig heads: A variety of jig heads from 1/72nd ounce to 1/4 ounce, Roadrunner variety with spinners to simple round heads can be used.

The knot: Use an overhand loop knot so jigs hang properly as they are pulled. Put the heavier jig at the end of the line. The lighter jig up about 3 1/2 feet on the line with a 6- or 7-inch loop.