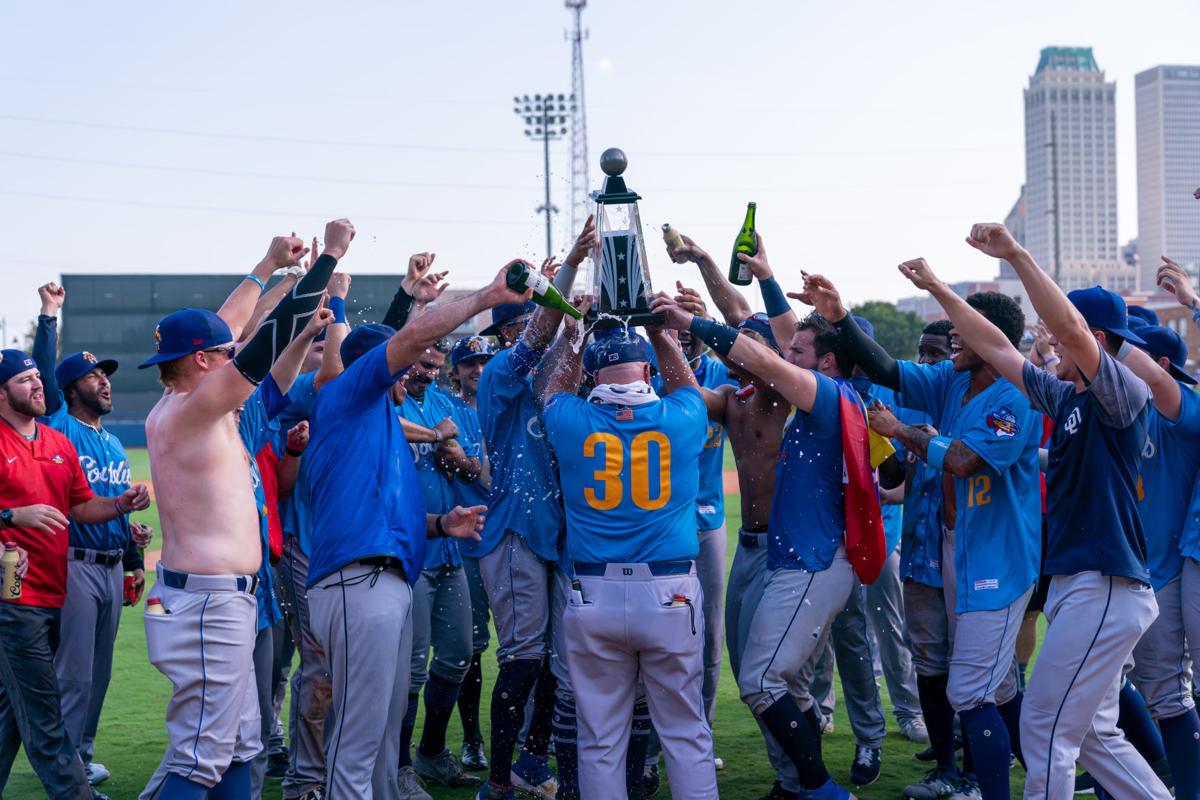 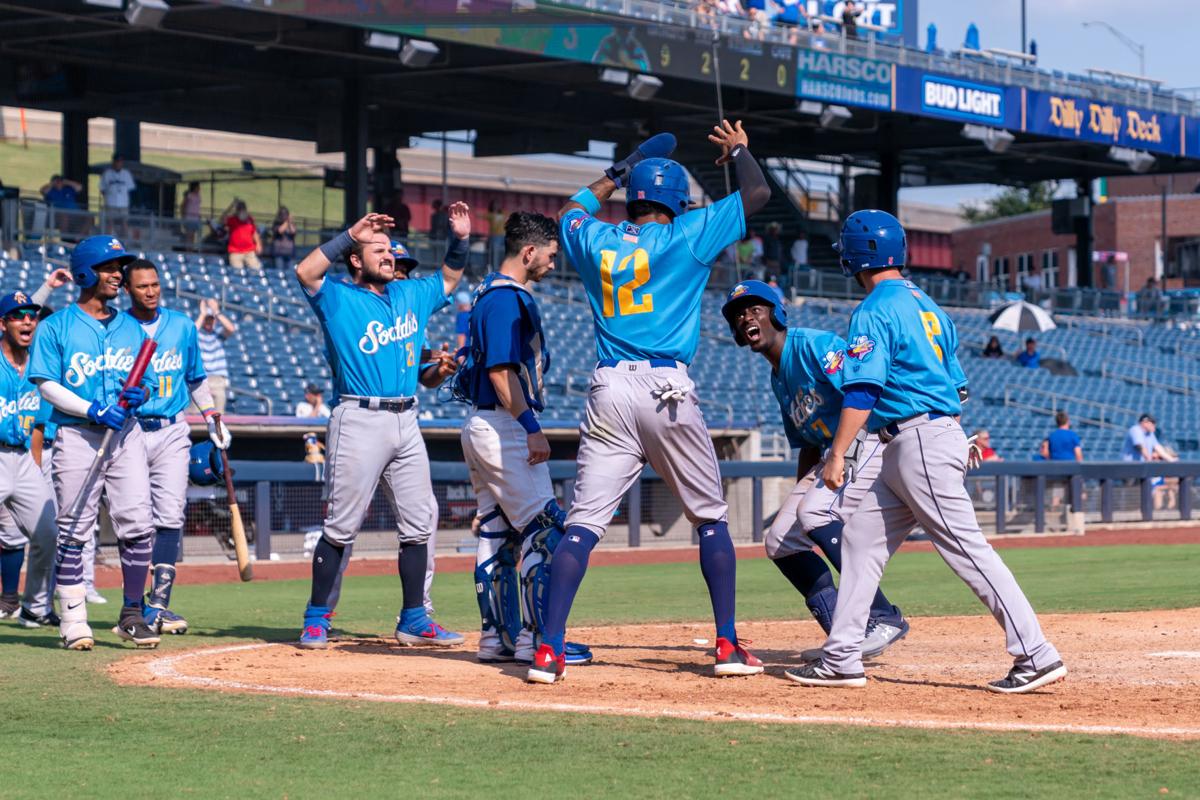 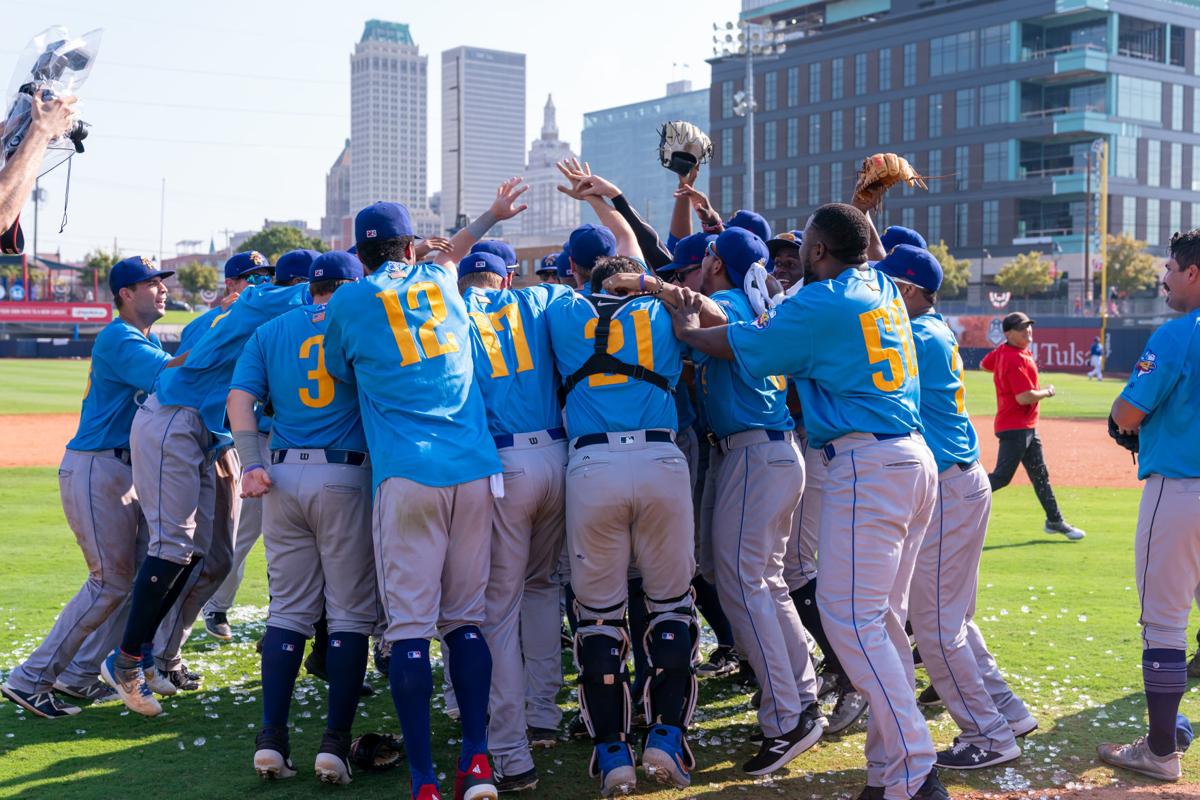 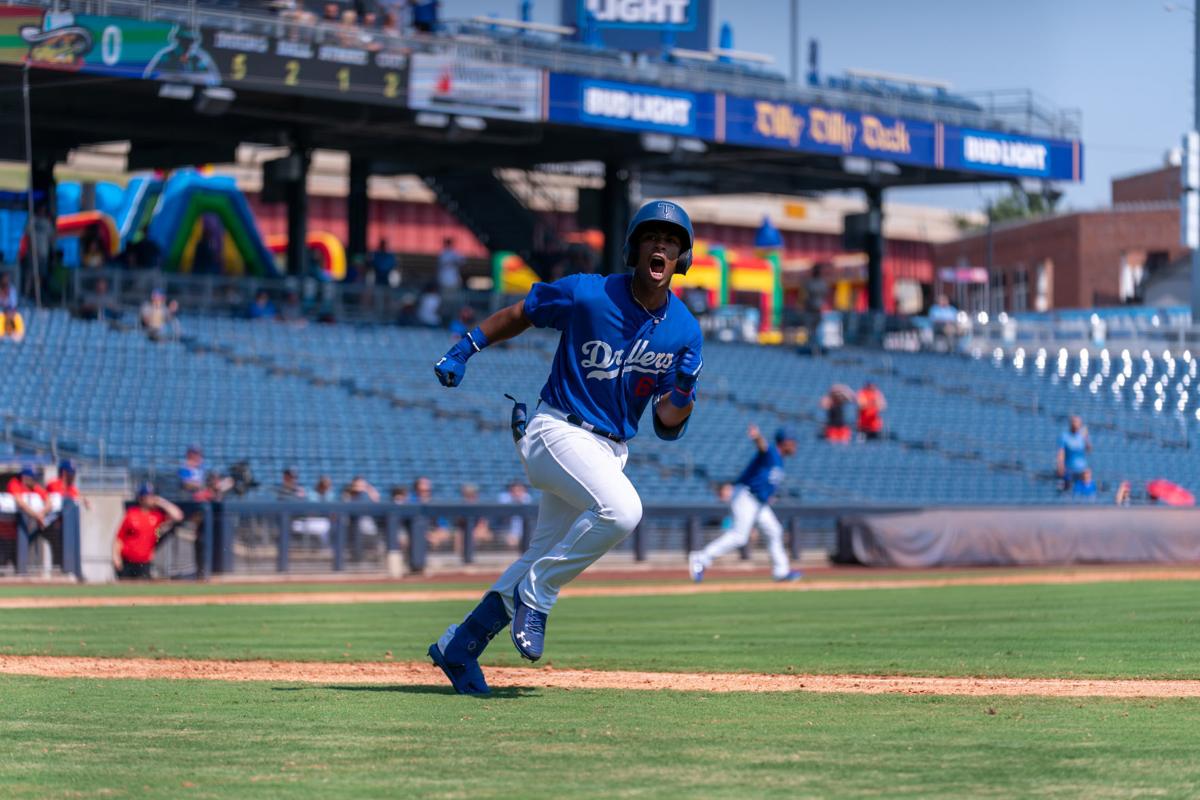 Tulsa’s Jeter Downs yells in celebration toward the Drillers dugout as he runs down the first base line after hitting an RBI double on Sunday at ONEOK Field. Tim Campbell/for the Tulsa World 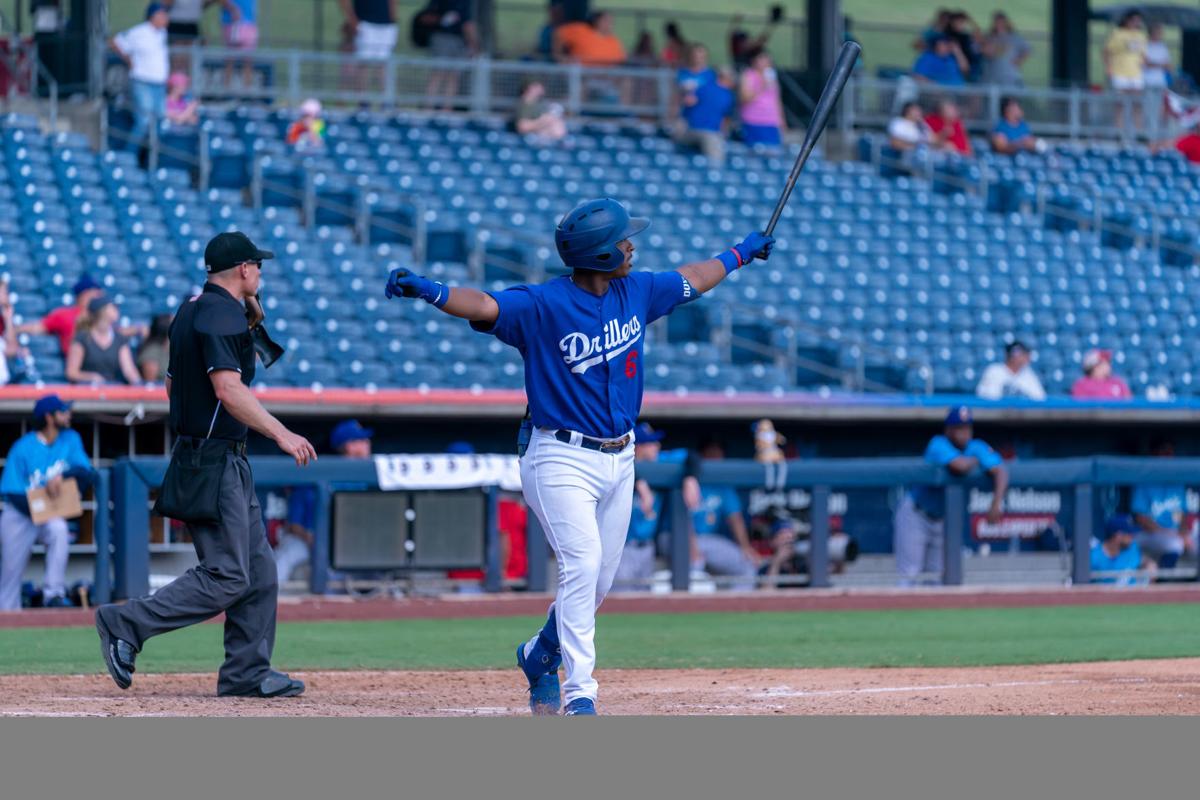 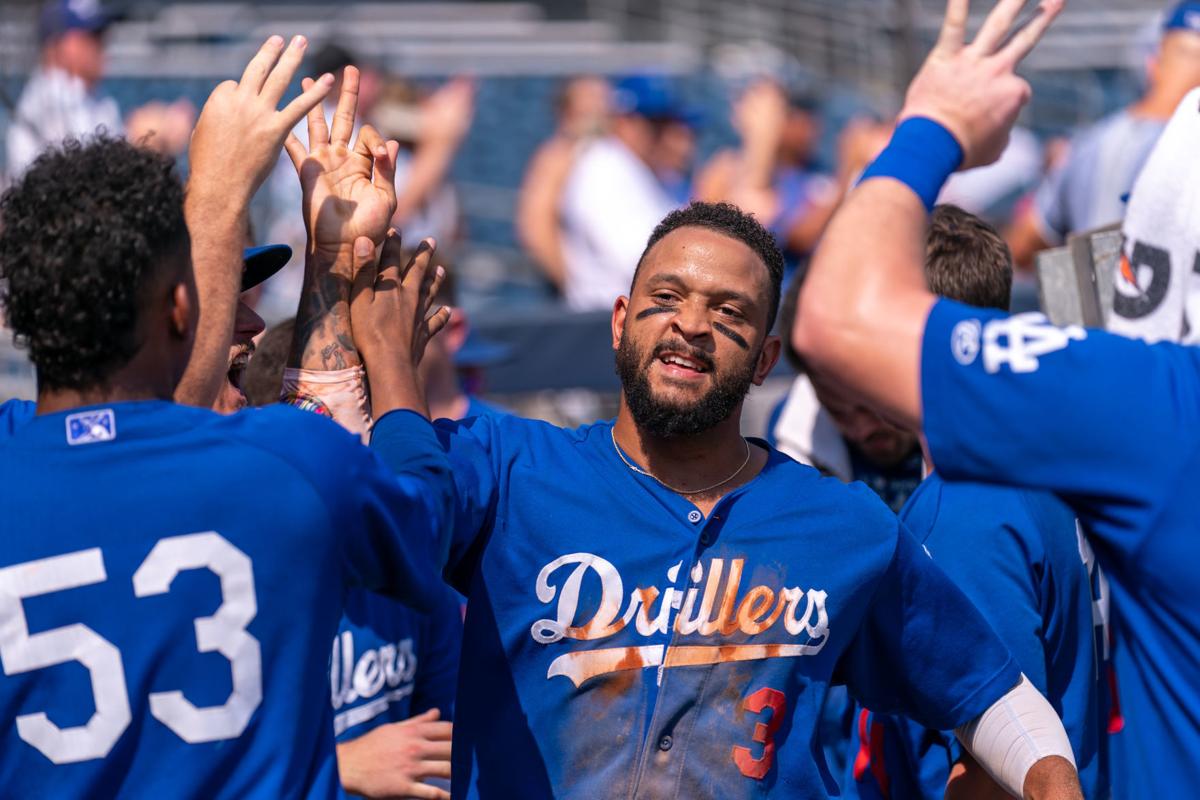 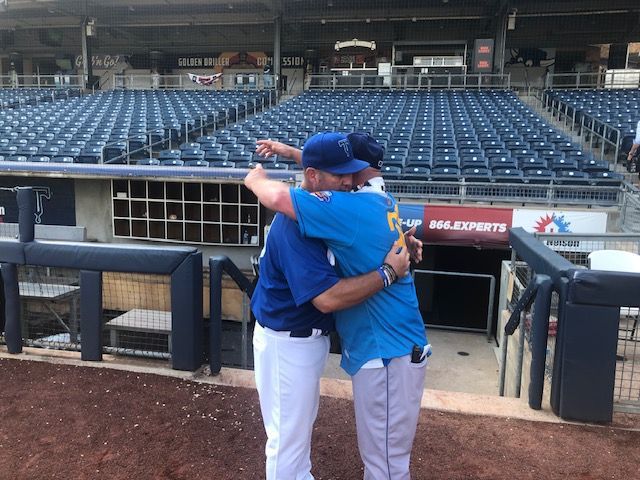 Tulsa’s Jeter Downs yells in celebration toward the Drillers dugout as he runs down the first base line after hitting an RBI double on Sunday at ONEOK Field. Tim Campbell/for the Tulsa World

Three outs stood between the Drillers and the first pennant won by a Tulsa pro baseball team before its home fans since 1963.

Instead of a celebration on a steamy Sunday afternoon, however, fans at ONEOK Field witnessed the most horrific ninth inning for a Tulsa team in a home game in the city’s 100-plus years of pro baseball.

Taylor Trammell’s go-ahead grand slam and Hudson Potts’ three-run homer highlighted a seven-run rally that lifted the Amarillo Sod Poodles to an 8-3 victory over the stunned Drillers in the winner-take-all Game 5 of the Texas League Championship Series.

The Sod Poodles, who won the series 3-2, capped their first season with Amarillo’s first pennant since 1976. The Drillers missed a chance to win consecutive pennants for the first time in the team’s 43-year history. Tulsa last won consecutive pennants in 1973 and ‘74 in the American Association and 1962 and ‘63 in the TL.

Amarillo also scored seven runs in its last at-bat to snap a tie in Game 1 after Tulsa rallied from a 5-1 deficit.

The Drillers, on the strength of Jeter Downs’ three RBIs, took a 3-1 lead into the ninth Sunday and brought in Nolan Long, who got the save with a scoreless final inning in Game 3.

“We feel good with Nolan Long going out there, and it just wasn’t his day,” Hennessey said.

Long walked the first two batters on eight pitches. Peter Van Gansen bunted for a hit to load the bases for Trammell, a highly regarded outfield prospect who was acquired by San Diego in a multi-player deal from Cincinnati on July 31. The left-handed hitting Trammell had grounded out with the bases loaded in the fifth.

In three previous at-bats against Long this season, he had walked and struck out twice.

Trammell got behind 0-2 and argued with home plate umpire Brian Walsh after the second strike.

“I just wanted to get my point across, one thing I had to be careful was how long it was,” Trammell said. “I just got caught up in the moment. It’s a close game, I’m battling my tail off. I had to be dialed in and I know what he’s (Long) got. He’s a really good pitcher and has a lot of rise on his ball. I went back to what my mom always tells me when hitting, ‘See the ball and hit the ball.’ Just simplify it.”

Trammell worked the count to 2-2 and then blasted the slam over the right field wall.

“I was really excited when I hit it, I sprinted around the bases,” Trammell said. “The only thing I remember was touching home. It was a great moment.”

After Long’s two walks, Ryan Moseley had started warming up in the Tulsa bullpen. Hennessey hoped that the Drillers could get an out on the bunt and then intentionally walk Trammell.

“But we don’t field the bunt and it just snowballed from there,” Hennessey said. “As soon as we got Moseley ready we brought him in, but it was too late.”

Moseley gave up Potts’ three-run homer with two outs after Luis Torrens kept the rally going with a bad-hop single.

The Drillers had been 71-3 this season when entering the last inning with the lead and Amarillo had been 4-62 when trailing.

Tulsa opened the scoring on Downs’ two-out RBI single in the fifth after Jared Walker was hit by a pitch and stole second. That came after the Sod Poodles came up empty in the top of the fifth as reliever Michael Boyle pitched out of an inherited bases-loaded, no-out jam.

The Drillers increased their lead to 3-0 on Downs’ two-run homer just inside the left-field foul pole in the seventh.

“All year, (we’ve been) very resilient, never die, keep fighting,” Amarillo manager Phillip Wellman said. “We’ve had many come-from-behind wins. Even when they hit the two-run homer I didn’t sense in the dugout we’re done, they kept battling.”

Amarillo then scored a run in the eighth as Torrens drew a bases-loaded, two-out walk that drew reliever Shea Spitzbarth’s protests to Walsh, but the veteran right-hander then retired Potts on a grounder to escape the jam still up 3-1.

“We thought we were in good shape, but just not enough to win,” said Hennessey, who told his players after the game, “Don’t hang your hat, everybody fought, everybody was pulling on the same side of the rope, we just didn’t get it done. We were one inning short.”