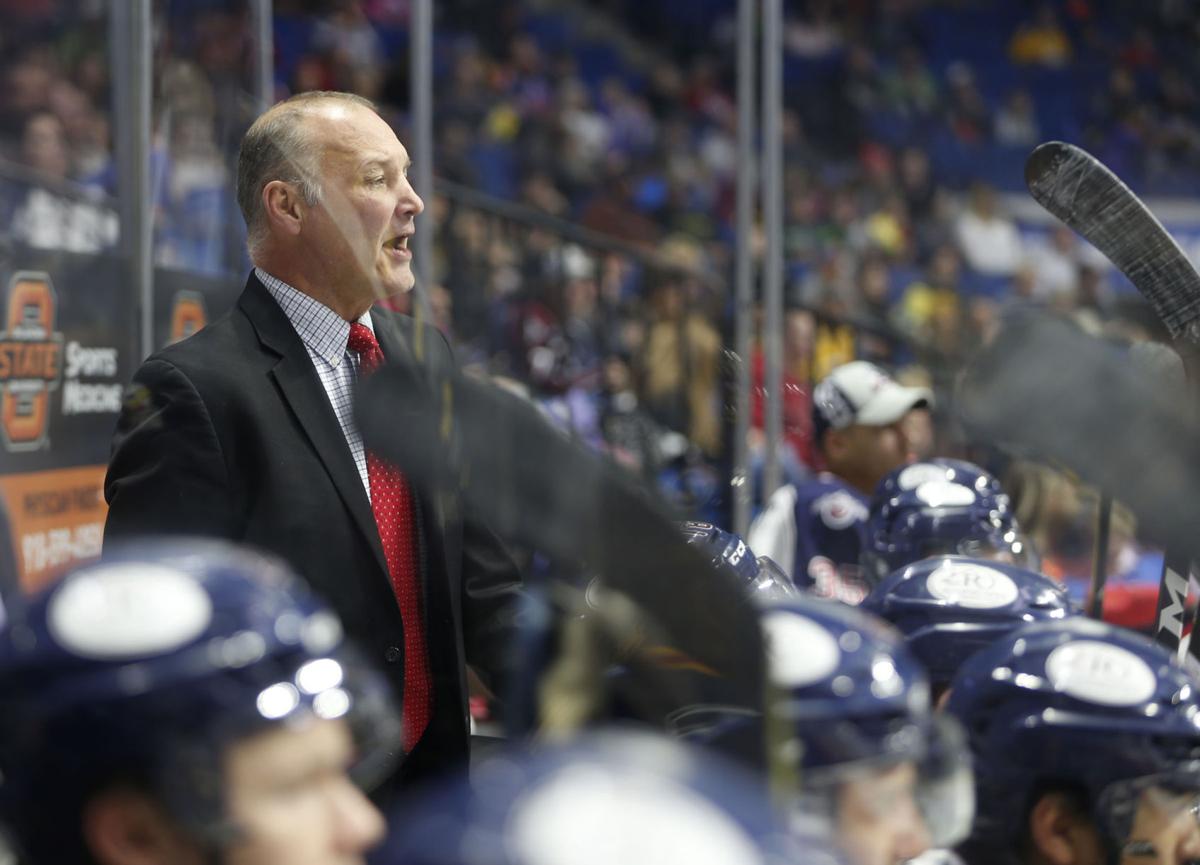 Since collapsing during a Nov. 17 game and being diagnosed as having a pulmonary embolism, Tulsa Oilers coach Rob Murray changed his diet and says he feels great. MATT BARNARD/Tulsa World 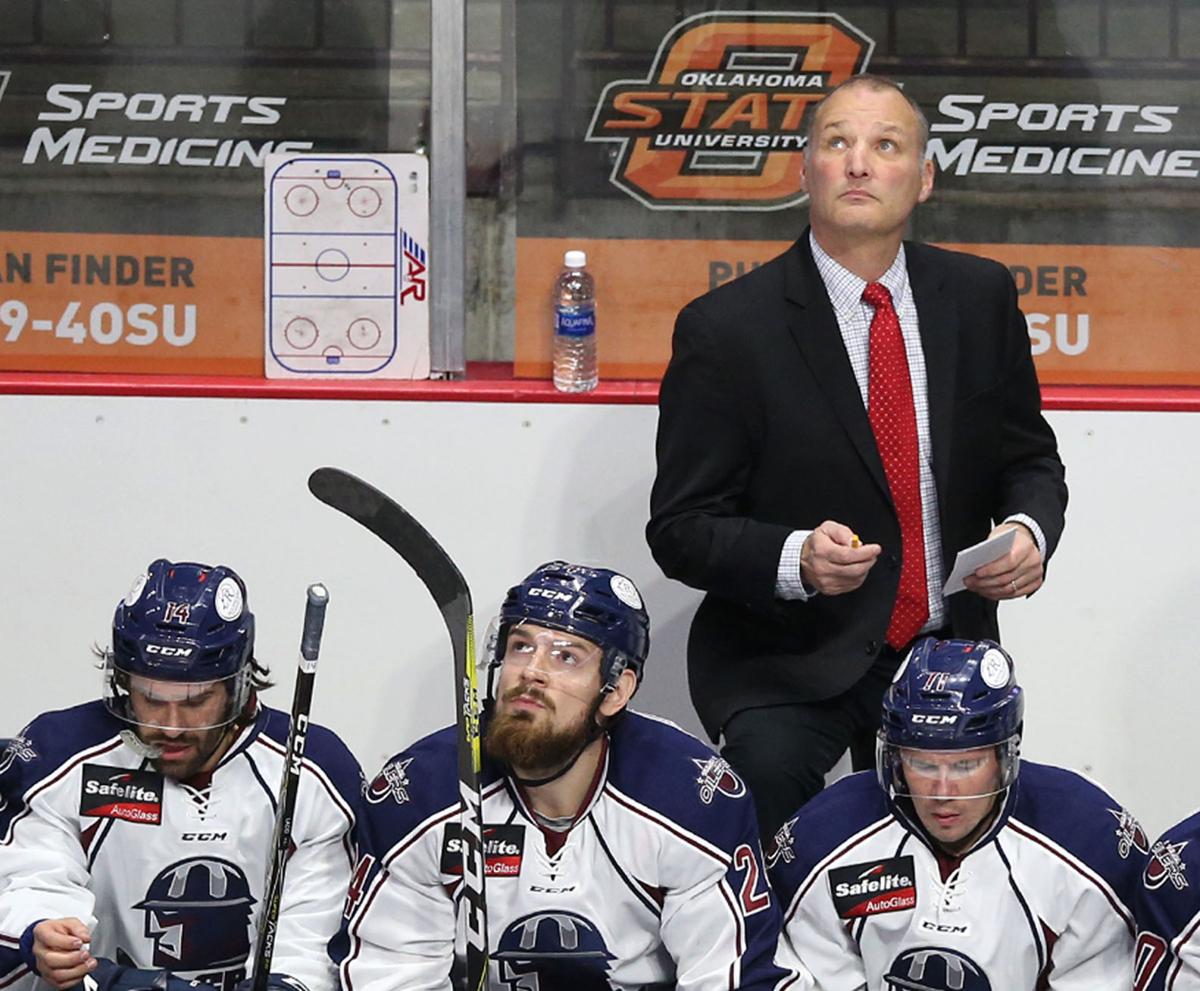 Having recovered from a health scare, Tulsa Oilers coach Rob Murray plans to enjoy Christmas with his wife and children. MATT BARNARD/Tulsa World 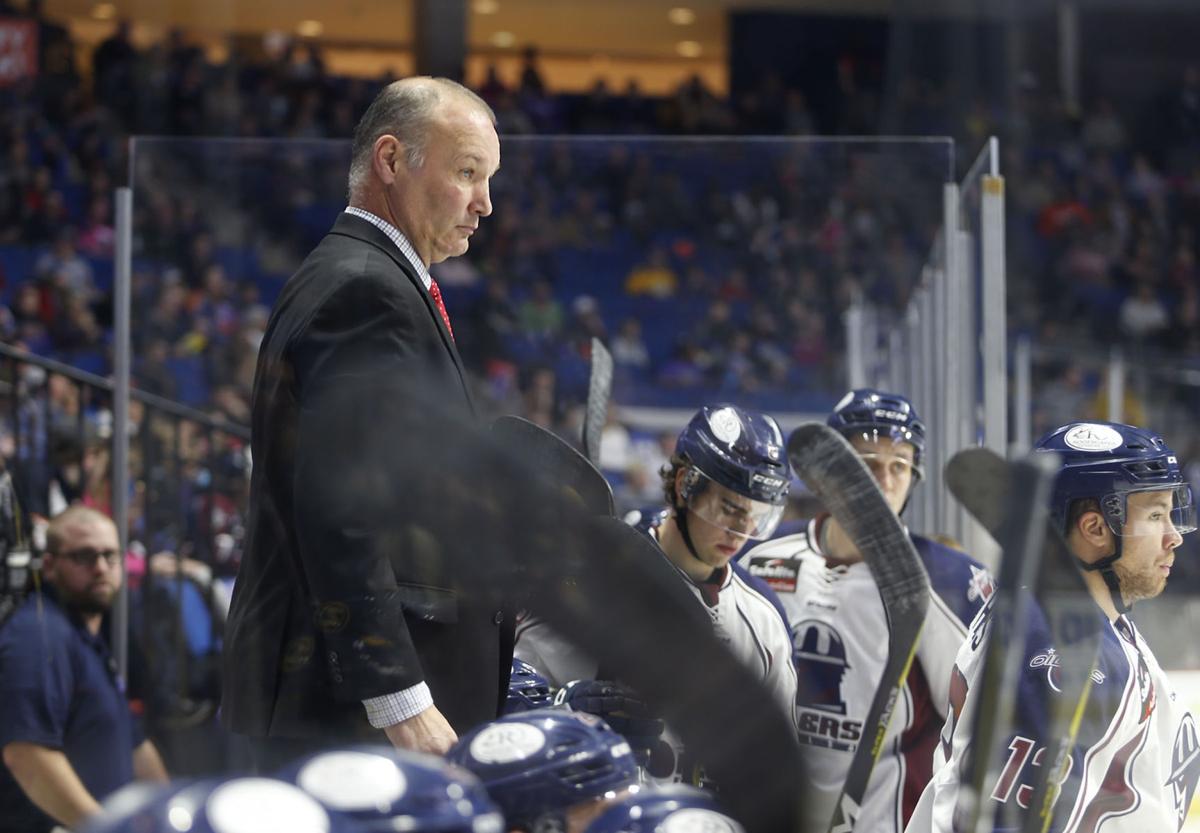 Since a health scare in November, Tulsa Oilers coach Rob Murray adjusted his diet and tripled his water consumption. He says he lost 20 pounds and feels great. MATT BARNARD/Tulsa World 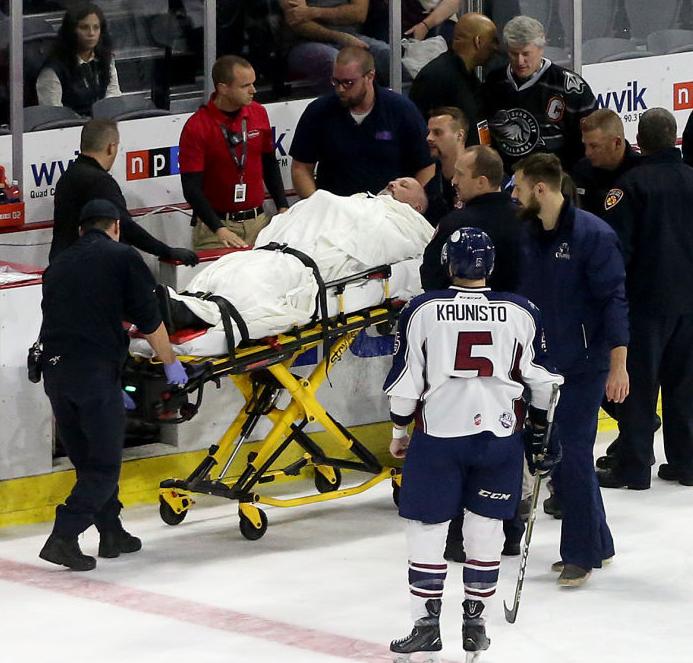 Since collapsing during a Nov. 17 game and being diagnosed as having a pulmonary embolism, Tulsa Oilers coach Rob Murray changed his diet and says he feels great. MATT BARNARD/Tulsa World

Having recovered from a health scare, Tulsa Oilers coach Rob Murray plans to enjoy Christmas with his wife and children. MATT BARNARD/Tulsa World

Since a health scare in November, Tulsa Oilers coach Rob Murray adjusted his diet and tripled his water consumption. He says he lost 20 pounds and feels great. MATT BARNARD/Tulsa World

On Nov. 17, during an ECHL contest matching the Tulsa Oilers and Quad City Mallards in Moline, Illinois, the Oilers led 2-1 and controlled the puck when a linesman blew his whistle.

As the official had been alerted to a situation on the Tulsa bench, play was stopped at 12:08 of the second period.

“What happened here? We have a scary moment,” Peterson reported. “Oilers head coach Rob Murray looks like he’s feeling light-headed. I’m not sure if he fainted or what. Oilers trainer Steve Lintern is keeping a close watch on coach Murray. A real scary moment actually here as the medical staff is coming out onto the ice to check on coach Murray.

“Hockey is no longer important at this juncture. ... I can’t imagine that we continue this game. ... I have to sign off the air right now. They’re calling me down to the ice. We’ll keep you posted throughout the night on the situation.”

During the fourth contest of an unimaginably grueling road stretch — 14 consecutive away games during a period of 35 days — Oiler players were jarred by the collapse of their first-year coach.

“I consider coach Murray to be a really good friend more than just a co-worker, so this was probably the scariest thing I’ve ever been through,” Peterson, the Oilers’ vice president of communications, said last week. “I was so thankful that we had so many good people there — first responders who were ready. A lot of people deserve a ton of credit.”

As the game was suspended, the 50-year-old Murray was taken from the arena on a stretcher.

The first suspicion was a heart attack, but that wasn’t the issue. During the Toronto native’s hospitalization, there was a diagnosis of extreme dehydration and the detection of a blood clot near his lung.

One week later, for a Friday game in Rapid City, Murray insisted on flying from Tulsa to South Dakota and coaching his team.

When he entered the pregame locker room, there was a burst of applause from Oiler players and staff members.

Best moment of the season so far. It was a nice bonus that Tulsa prevailed 3-1 that night, getting third-period goals from Connor Bleakley, Charlie Sampair and Dylan Hubbs.

Today, Murray is a healthy man, savoring Christmas in Tulsa with his wife and five children.

His response to the Quad City incident was to make smart changes with his diet and triple his water consumption.

“I’m just lucky that I was surrounded by medical professionals (on Nov. 17),” Murray said on Saturday, a few hours before the Oilers were beaten 5-3 at Allen, Texas. “If this had happened when I was in my hotel room, it could have went sideways on me real quick. If it was going to happen, it’s a good thing that it happened when it did. It was embarrassing, but I’ve learned from it.

“Obviously, it was scary for me and my family, but there were no warning signs that something was about to happen. I remember standing in the bench area, watching the game, and then my next memory is that I’m in the hospital.”

Murray is ready to make memories of a far more positive nature.

Having played 17 of its last 19 games away from home, Tulsa is two games above .500. All things considered, a tremendous record.

Starting with Wednesday’s 7 p.m. contest against the Kansas City Mavericks, the Oilers play 28 of their remaining 43 regular-season games at the BOK Center.

The grind of the road

After Murray was hired by the Oilers on June 7, he studied the 2017-18 schedule and thought, you’ve got to be kidding me.

From Nov. 5 through Dec. 9, there were 14 consecutive road games. There would be bus rides to Indianapolis, to Fort Wayne, Indiana, to Rapid City, to Boise, Idaho, and to Cincinnati.

“One under-the-radar aspect of the trip was the bonding time for this team,” Peterson said. “It’s a very close locker room. Coach Murray is the glue that holds everything together.”

Peterson shares some travel statistics: During one 14-day span, the Oilers logged 143 hours and 8,600 miles of bus time.

“It’s not painful to be on the bus, but it just feels like you’re never going to arrive at your destination,” Murray says. “We came back from Boise, Idaho, and it took us 29 hours and 45 minutes to get home. We stopped a couple of times for breakfast and dinner, but that was a horrendous ride.

“You just have to do it. To be quite honest, we probably became a better team because of that experience.”

The Oilers have prevailed in six of their past nine games. Because of that, as the remaining schedule is so favorable, Tulsa has a chance to thrive on home ice and climb in the ECHL’s Mountain Division standings.

“When you looked at our schedule in the summer, you thought, ‘If you come out of that trip at .500 or better with your record, you’ve got to be happy as a coach.’ That was my mind-set,” Murray recalled. “That was something to shoot for. But then you also think, ‘Holy (bleep). What if we go 2-12 during that 14-game trip? There’s no coming back from that.’

“It could have been disastrous, but we held our own, and now we’ve got a lot of home games ahead of us.”

Between Wednesday and Jan. 21, the Oilers play 11 home games.

“We’ve got to take advantage of the schedule,” Murray said. “We’ve played a very good brand of hockey on the road. Now, we’ve got to bring it home. We’re building a confidence that started on the road.”

During Murray’s 1989-91 run as a center with the Washington Capitals, he was introduced to a woman from Virginia. Next Sunday — New Year’s Eve — is the 28th anniversary of their first date.

“It’s like we rebooted after every couple of years,” Murray said.

During chill time with his kids, Murray would snack on a bag of chips. He no longer reaches for chips. Instead, as part of his new commitment to a healthier lifestyle, he prefers raw broccoli and cauliflower. He exercises more frequently and with a purpose.

“I’m on blood thinners now and I’m taking better care of myself,” Murray explained. “I want to be there for my family and my team. I’ve got a lot to live for.”

The “scary moment” of Nov. 17 led to a phenomenal result: A healthy hockey coach, celebrating Christmas with his family while aspiring for a special season with the Oilers.

Tuesday is the continuation of the Nov. 17 game at Quad City that was suspended when Oilers coach Rob Murray collapsed during a health scare.