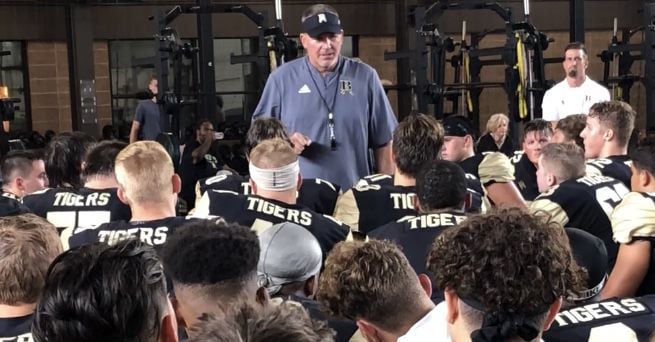 After having advanced to the Class 6AI semifinals last season, coach David Alexander and the Broken Arrow Tigers open the 2018 season by hosting rival Union on Friday. BILL HAISTEN/Tulsa World 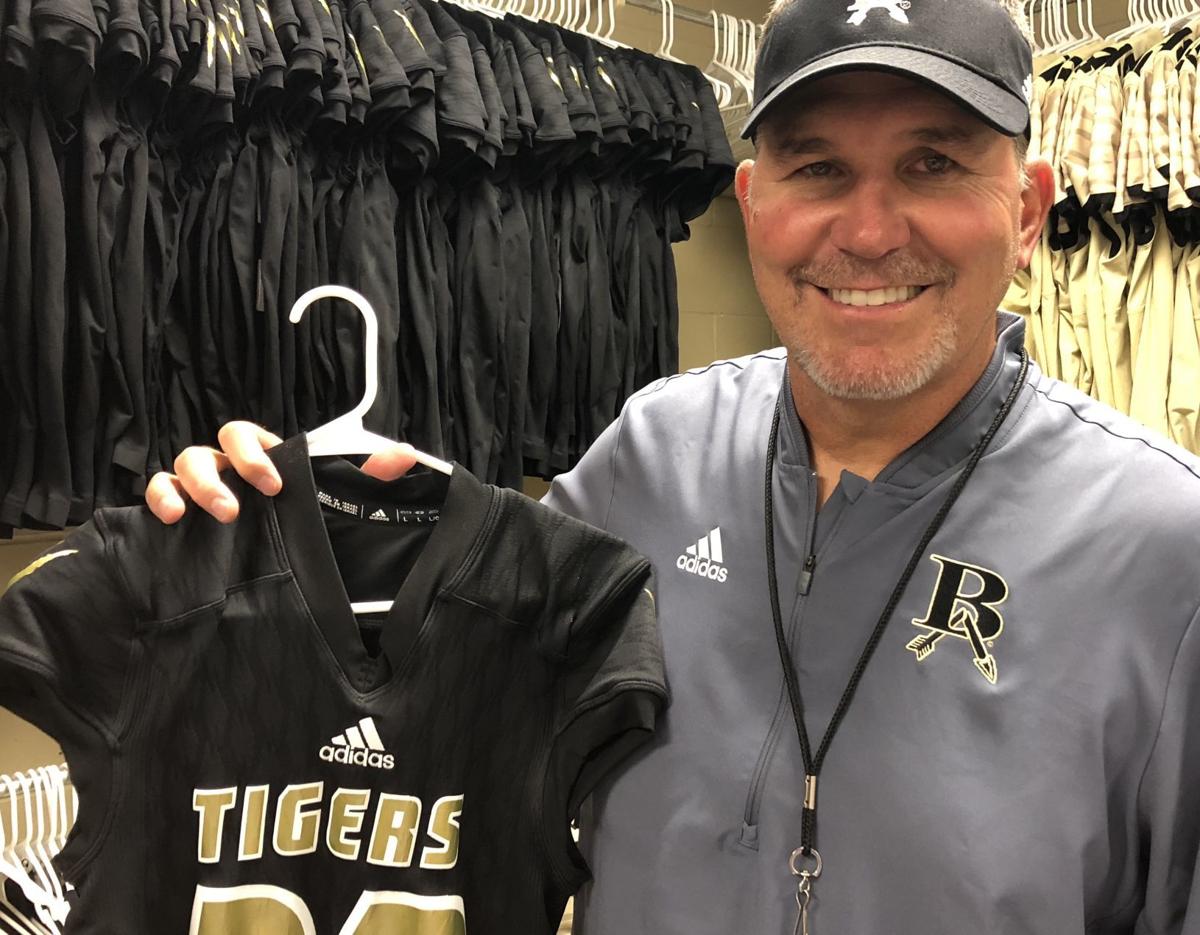 Fifth-year coach David Alexander and the Broken Arrow Tigers will be outfitted this season in new Adidas uniforms and apparel. BILL HAISTEN/Tulsa World 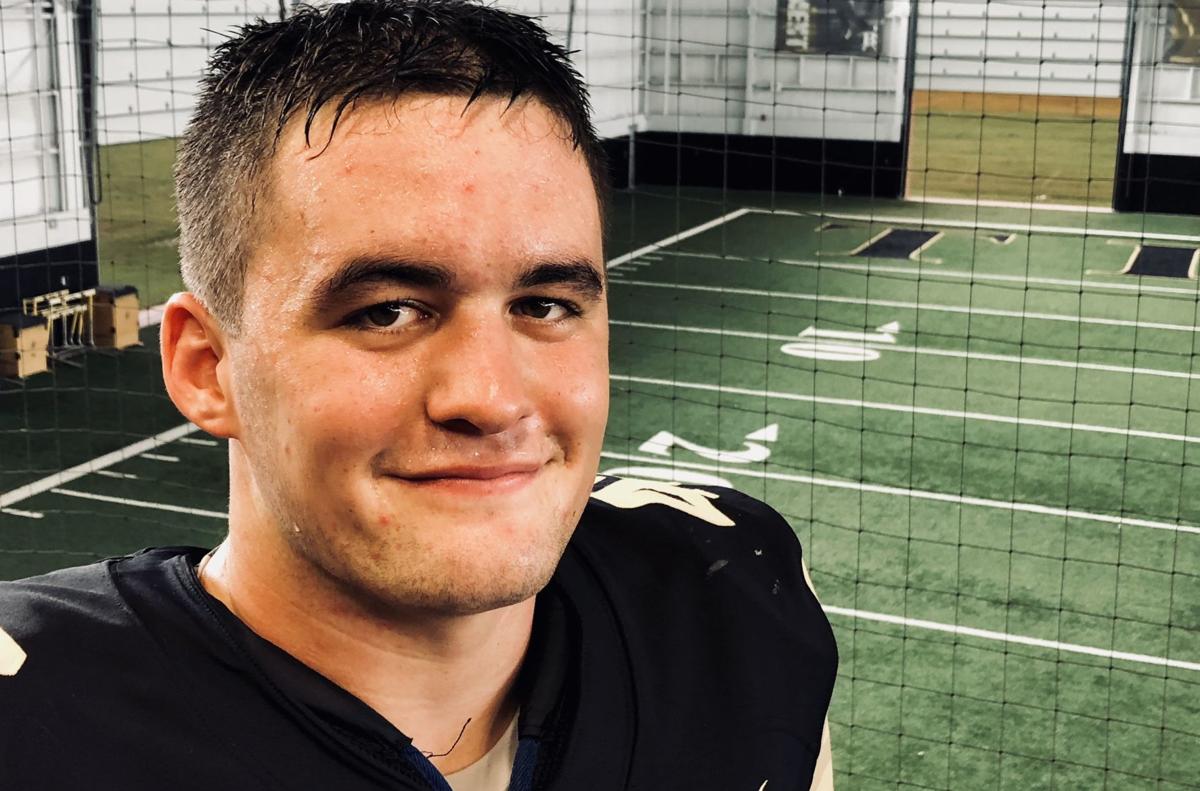 A defensive end and fullback, Broken Arrow senior Kaizer Newell and his teammates are matched with Union on opening night. BILL HAISTEN/Tulsa World

After having advanced to the Class 6AI semifinals last season, coach David Alexander and the Broken Arrow Tigers open the 2018 season by hosting rival Union on Friday. BILL HAISTEN/Tulsa World

Fifth-year coach David Alexander and the Broken Arrow Tigers will be outfitted this season in new Adidas uniforms and apparel. BILL HAISTEN/Tulsa World

A defensive end and fullback, Broken Arrow senior Kaizer Newell and his teammates are matched with Union on opening night. BILL HAISTEN/Tulsa World

BROKEN ARROW – Among the 100 reasons to love high school football: A No. 1 vs. No. 2 match-up on opening night.

For the Tigers, it’s an immeasurably significant opportunity to replicate the Owasso performance of a year ago.

In 1996-2016, Jenks or Union won every football state championship in Oklahoma’s largest classification. In 2017, after having been 3-7 the season before, the Owasso Rams opened with a resounding victory at Jenks.

That outcome resonated throughout 6AI, and the Rams concluded a dream season by conquering Union in the title game.

For the first time in the lives of all current high school athletes, there was not a championship for Jenks or Union.

Broken Arrow is known statewide for having Oklahoma’s largest high school – and for never having won a championship in football. Broken Arrow has been competing in football since 1904.

Having advanced to the 2017 6AI semifinals, the Tigers now aspire to become this year’s Owasso.

“What it’s going to take for us to win (a title) is a senior group that decides they’re going to make a change,” fifth-year Tiger coach David Alexander said. “I can’t shy away from the fact that this is the best team I’ve had. The previous four years, I had two kids (who signed FBS letters of intent). We’ve got five guys now who are committed to Division I programs.

“We’re not going out there against Union, completely handicapped at the skill positions like we were in the past. Now, we’ve got guys who can run with them.”

While there is uncertainty at the quarterback position, there otherwise is no talent or physical deficiency at Broken Arrow.

Among Alexander’s secondary personnel are Myles Slusher, Aaron Stokes Trickey and Kejuan Tolbert – each of whom is a member of Broken Arrow’s 400-meter track relay team.

“If you talk with (Union coach) Kirk Fridrich, (Owasso’s) Bill Blankenship or (Jenks’) Keith Riggs, they might tell you that the best receiver in 7-on-7 this summer was (Broken Arrow senior) Matt Kaiser,” Alexander said. “He was uncoverable.

“We played 15 games in a 7-on-7 tournament in Arkansas, and Matt had to have caught 50 balls and 20 touchdowns. He was the MVP of that whole tournament.”

Last season, Tiger running back Noah Cortes rushed for 1,580 yards and averaged 7 yards per attempt. He operates behind what could be the best offensive line in the state.

A junior, Raym is the highest-rated offensive lineman in Oklahoma. Among the state’s college football prospects overall, only Booker T. Washington senior Dax Hill would be more highly regarded.

Collectively, Broken Arrow’s linemen strike at defenses like a 1,355-pound fist. Cortes should have another huge season, and protection should be solid for a new quarterback.

While Jenks (Ian Corwin), Owasso (Will Kuehne) and Union (Peyton Thompson) have returning starters at quarterback, Alexander has presided over an actual QB competition this month. Senior Tate Robards is a transfer from Collinsville. Senior Quintevin Cherry is a transfer from Muskogee.

Both probably will play during the first few games, but it is expected that Robards will get the Friday start against Union.

“We’re begging for one of them to step up and take the reins,” Alexander said. “They’ve both shown flashes.”

Blackie Gibson is a 75-year-old insurance representative who has been attached to Broken Arrow football since the 1960s. He is referred to as having been a longtime volunteer coach, “but I really haven’t done that much actual coaching,” he explains. “They call me a coach, but I just love watching those guys perform. I love being around the program.”

If BA were to finally get a football title, Gibson says, “this whole town would go crazy. We’ve been close before. We’ve won championships in other sports, but not in football. It would mean so much to so many people around here.”

Ben Buie is invested in this community as a former Tiger offensive lineman, as a 2000 graduate of the high school and now as a resident and the owner of two Broken Arrow bars.

“I really think a championship would move the needle quite a bit,” said Buie, who at the college level played center for Oklahoma State teams that recorded Bedlam victories in 2001 and 2002. “What’s unique about Broken Arrow is that it’s a city. Not a town. There are 100,000 people now, but we still have the homecoming parade coming down Main Street. We still have only one high school.

“When you start winning big games and championships, it makes that hometown feel all the more real. You’re uniting a full city. You get that Friday Night Lights vibe, but not a bigger scale.”

Broken Arrow has a fantastic but challenging schedule. After hosting Union, the Tigers have a Border Brawl home game against Mansfield (Texas) High, which last season was 11-2. On Sept. 7, Broken Arrow plays at Owasso. On Sept. 21, Broken Arrow hosts Jenks.

September is rife with appealing match-ups – and with statement opportunities for the Broken Arrow Tigers. It all starts in the best possible way: Union at Broken Arrow this week.