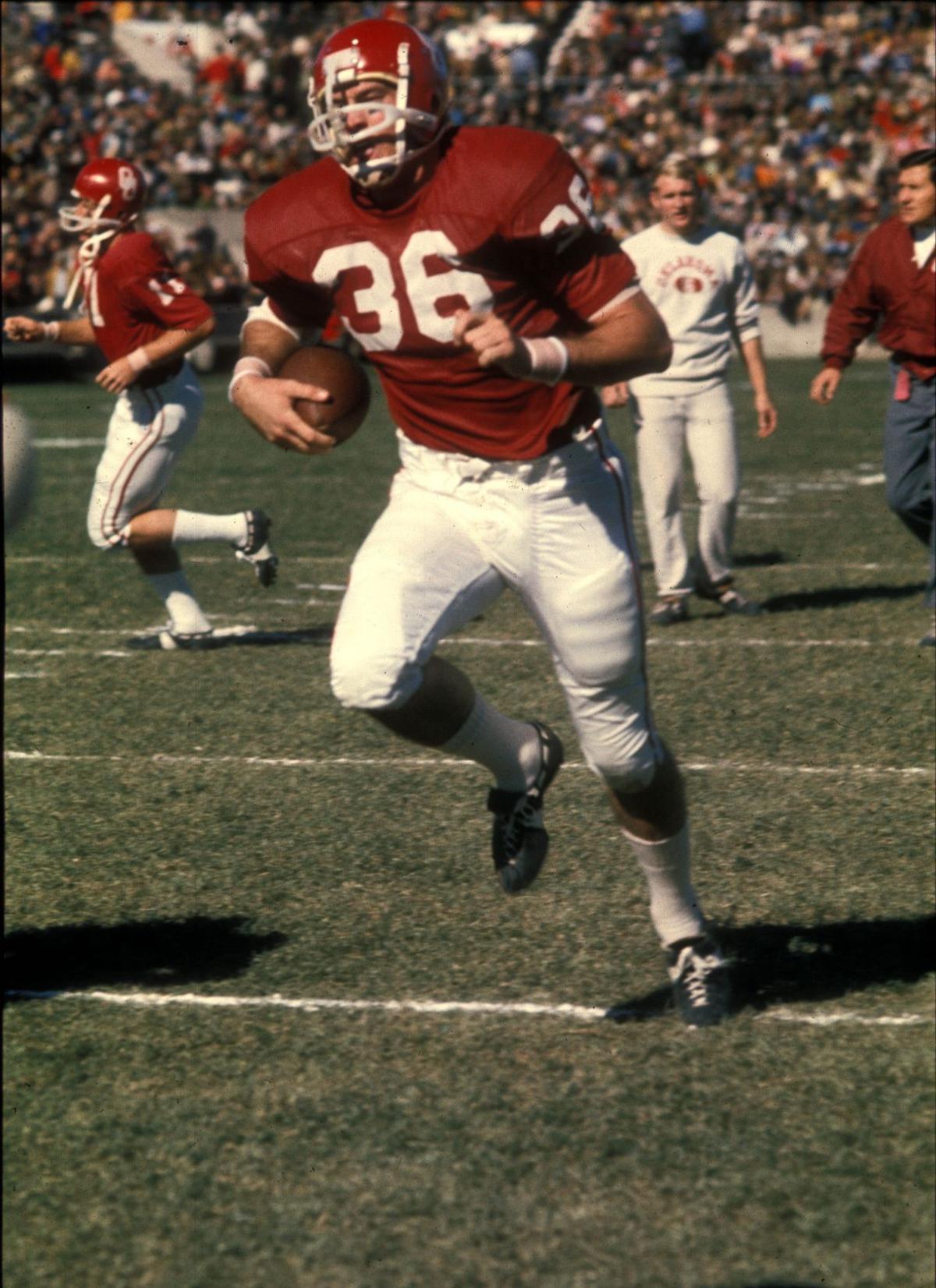 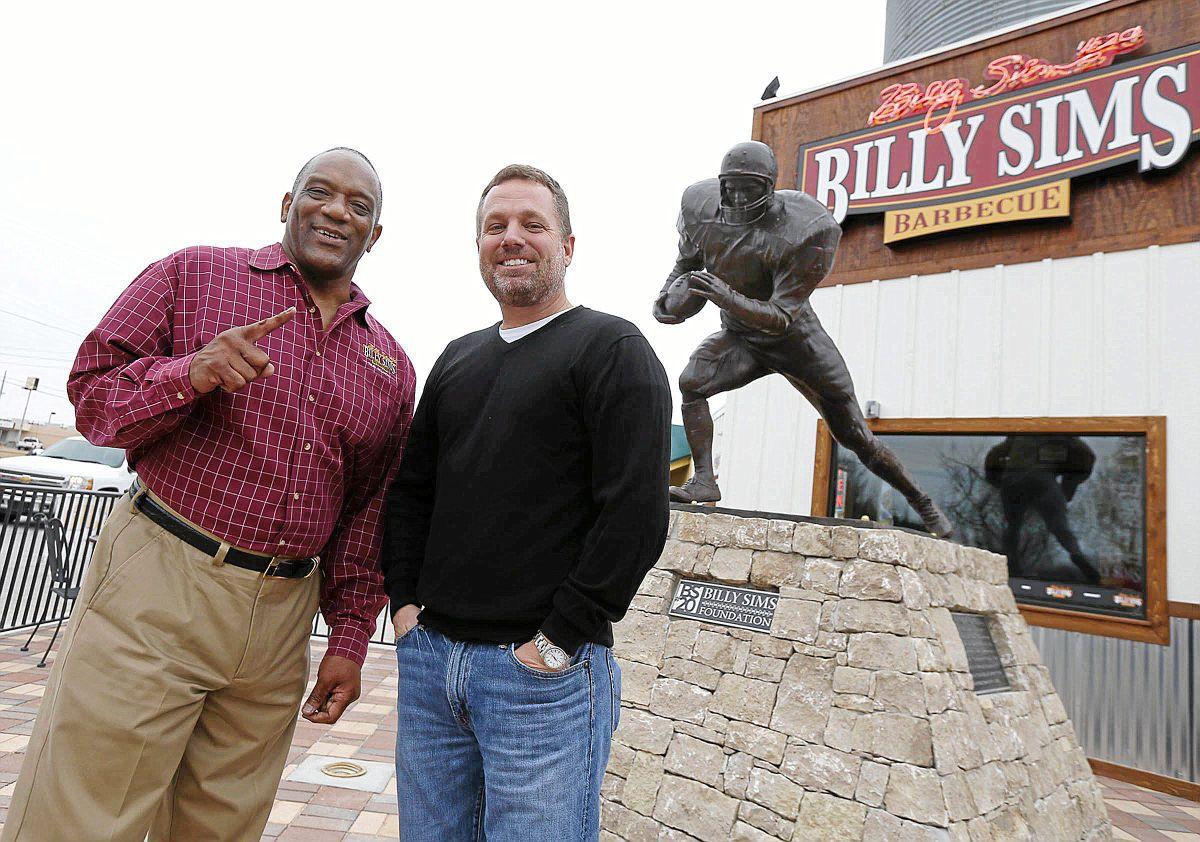 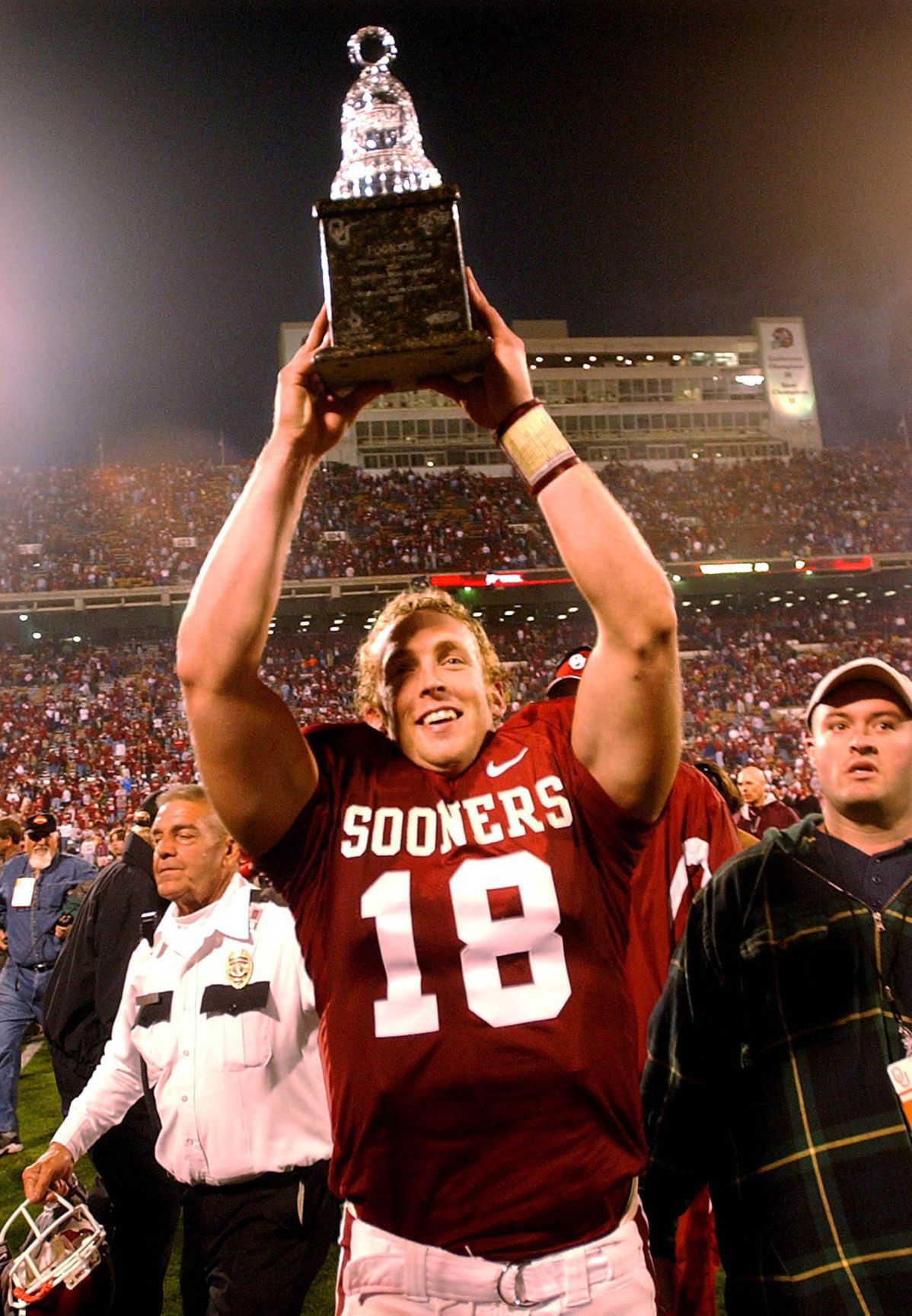 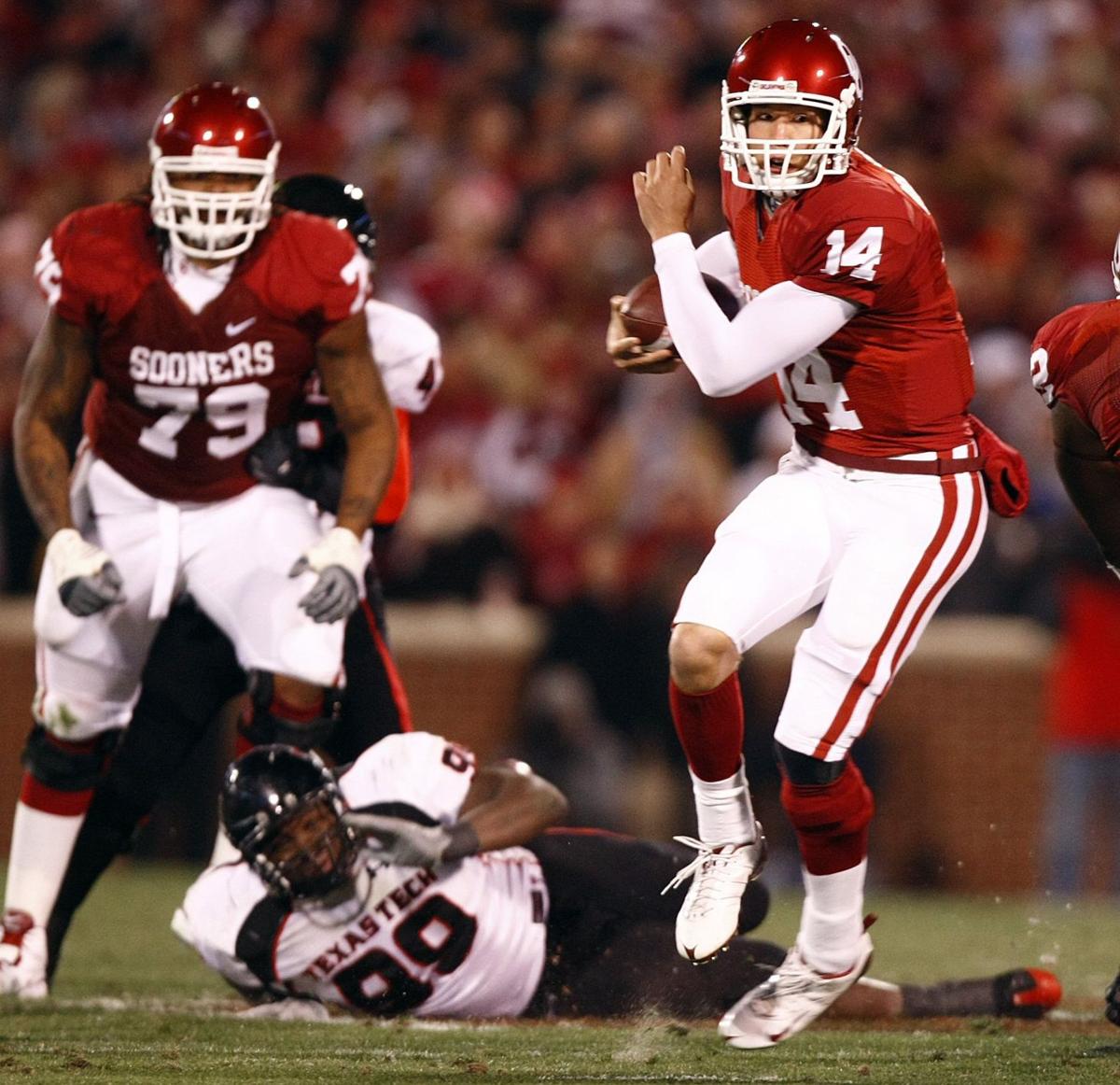 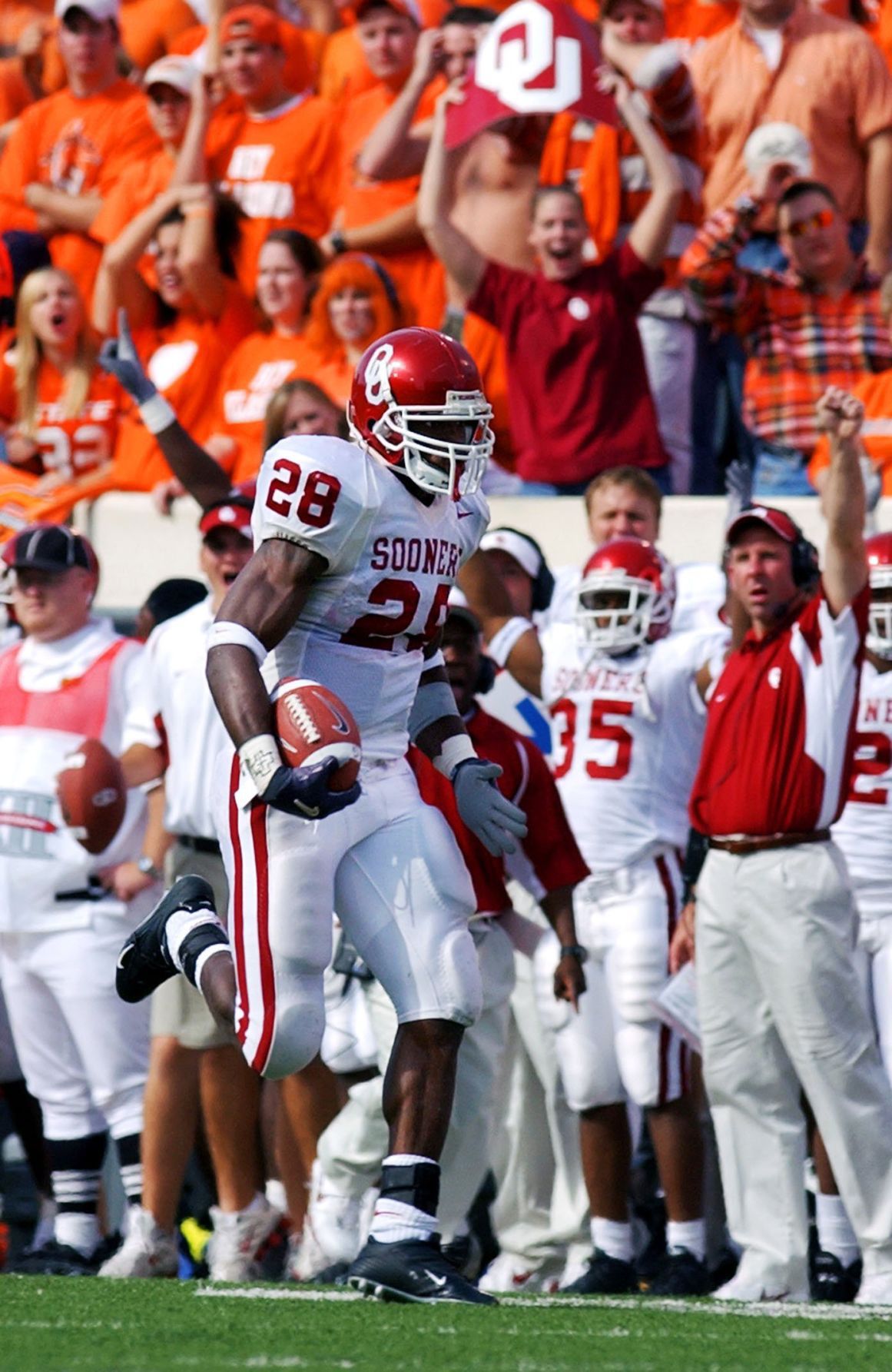 OU running back Adrian Peterson runs down the left sideline on an 80-yard touchdown run during the 2004 Bedlam game. Tulsa World file

OU running back Adrian Peterson runs down the left sideline on an 80-yard touchdown run during the 2004 Bedlam game. Tulsa World file

Celebrate Baker Mayfield’s Heisman Trophy with a commemorative page. They’re $5, plus shipping. Click this link to see the page in Sunday's Tulsa World and to order

A look at Mayfield's best games at OU

Emig: Flag plant or not, Baker Mayfield deserves Heisman Park statue as unique as he is

Haisten: The Heisman Trophy, a title bid and a first-round draft selection

How the World staffers voted in the Heisman

Billy Vessels (1952): The favorite son from Cleveland, Oklahoma, ran for 1,072 yards and 18 touchdowns during his senior season. He clinched the Heisman Trophy while running for 195 yards on 17 carries during a loss at Notre Dame that season. He was the first Heisman winner to play in the Canadian Football League.

Steve Owens (1969): The former Miami High School star scored 23 touchdowns and had two 200-yard plus games. The workhorse still holds the OU record for most carries in a game (55) and career (958). He traded his Heisman Trophy cuff links for a set of Richard Nixon’s Presidential Seal cuff links. Nixon reportedly felt he got the better end of the deal.

Billy Sims (1978): The only non-Oklahoman to win a Heisman at OU, Sims led the nation with 1,762 rushing yards and finished with 20 touchdowns to become only the sixth junior to win the Heisman at the time. He finished second in the 1979 Heisman balloting.

Sam Bradford (2008): Bradford, barely recruited out of Putnam City North High School, triggered an OU offense by throwing for 4,464 yards and 48 touchdowns against only six interceptions. He became the second sophomore to win the award, which came one year after Florida’s Tim Tebow captured the Heisman.

Kurt Burris (1954): The center received 838 points to finish second to Wisconsin’s Alan Ameche (1,058). A beneficiary from a pointed OU campaign for the Heisman, Burris’ run remains the closest a lineman has come to earning a Heisman Trophy.

Greg Pruitt (1972): Nebraska’s Johnny Rodgers (1,310 points) edged Pruitt (966) in yet another competition between the rivals. Pruitt rushed for 938 yards and 13 touchdowns in his senior season.

Billy Sims (1979): One year removed from winning the Heisman, Sims finished a distant second to USC’s Charles White, whose 2,050 rushing yards was far from Sims’ final rushing total of 1,506. White ended with 1,695 points. Sims, in his senior year, only had 773.

Josh Heupel: In 2000, the senior finished second in voting after guiding Oklahoma to its first Big 12 title.

Jason White: The quarterback won the Heisman Trophy in 2003 and finished third in 2004 voting.

Sam Bradford: Bradford won the Big 12 and Heisman in 2008 after piloting OU to a 2007 conference championship as well.

Baker Mayfield: In 2016 and 2017, Mayfield led the Sooners to league crowns. He finished third in Heisman voting last season and is considered the frontrunner for the 2017 award.