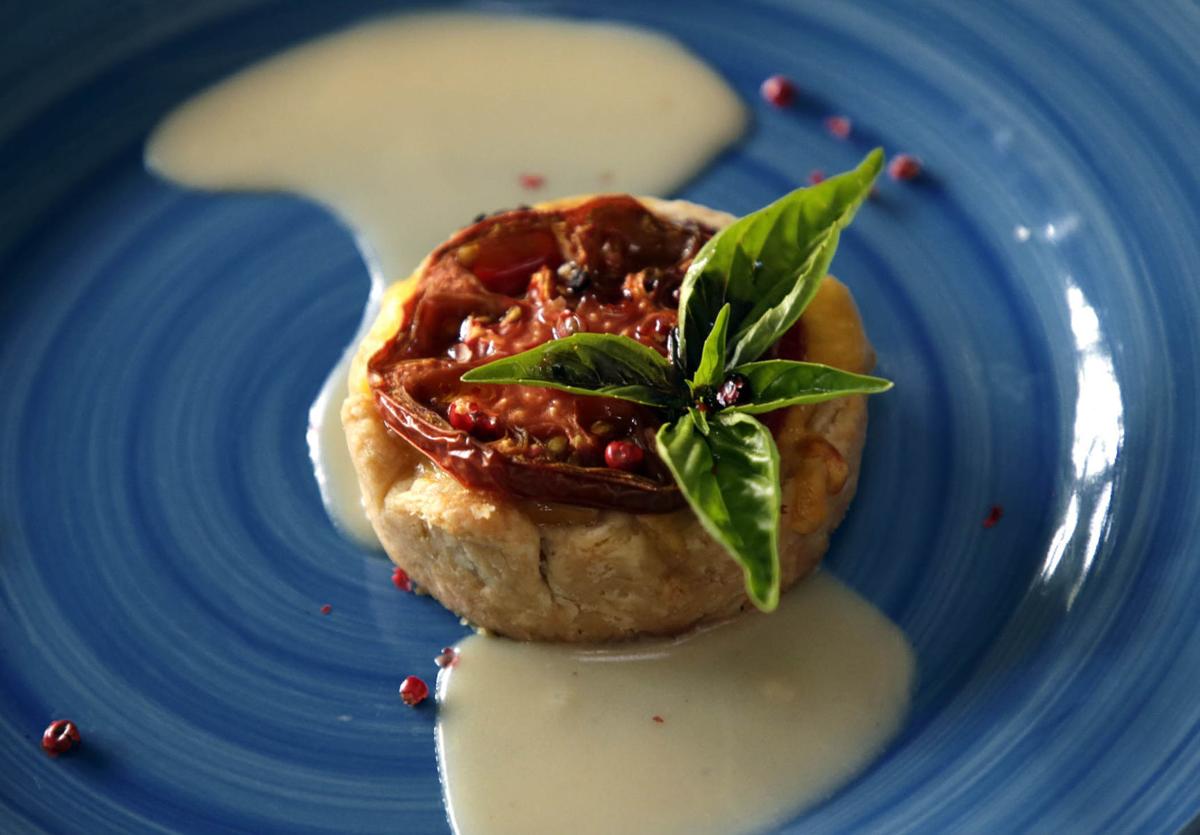 Heirloom tomato pie with a butter crust was among the nine courses at a dinner recently at Living Kitchen Farm & Dairy near Depew. CORY YOUNG/Tulsa World 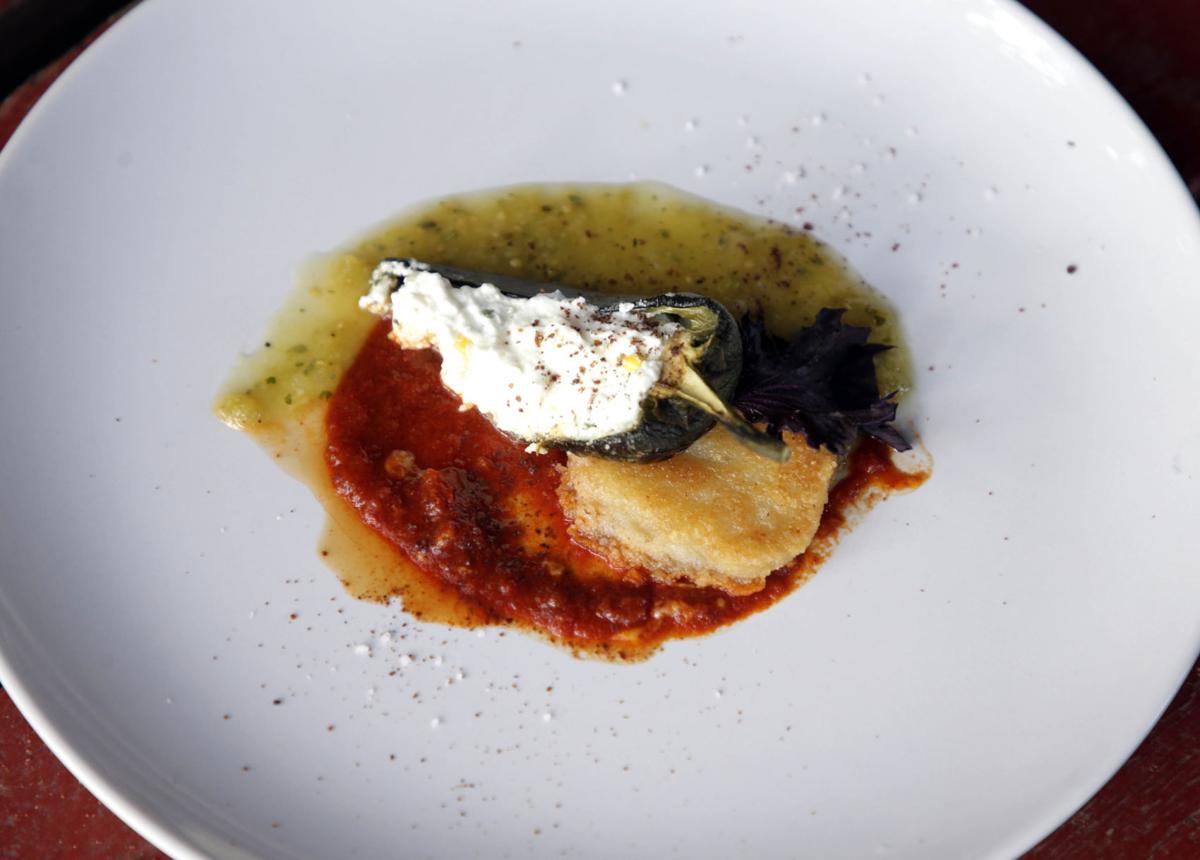 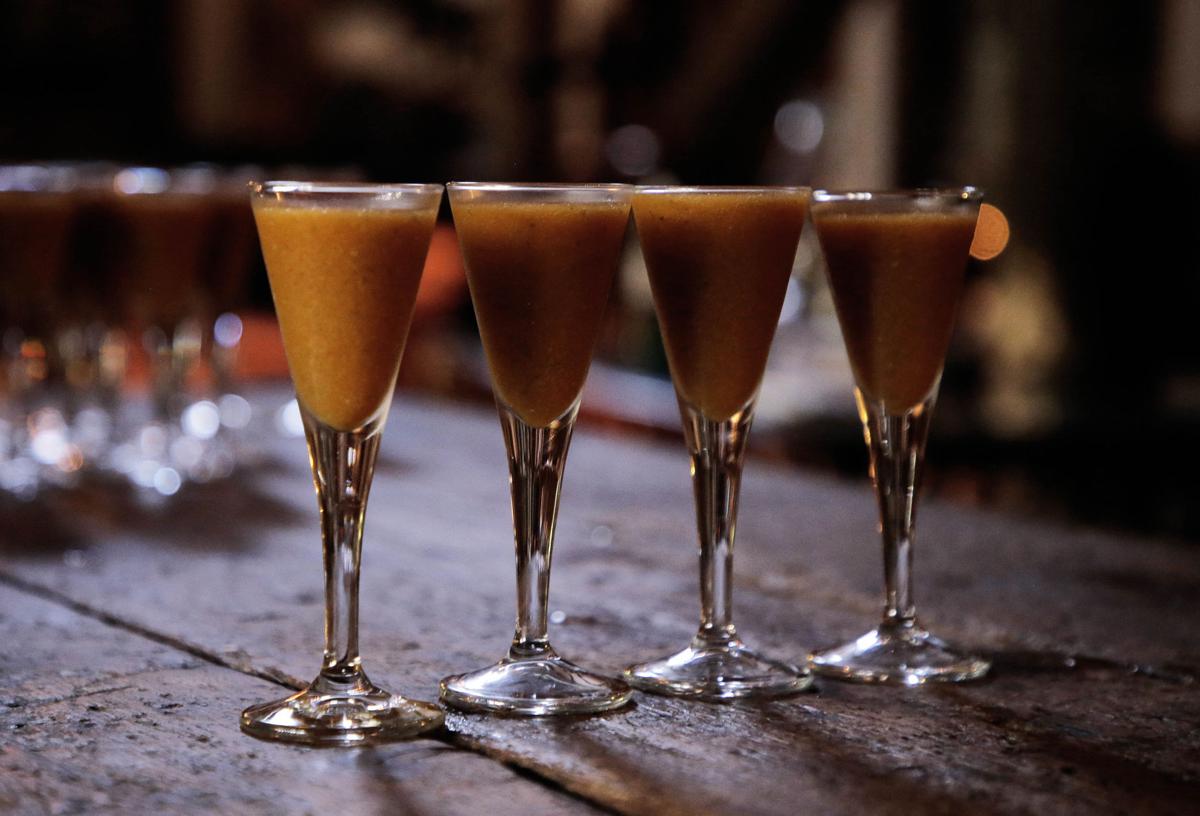 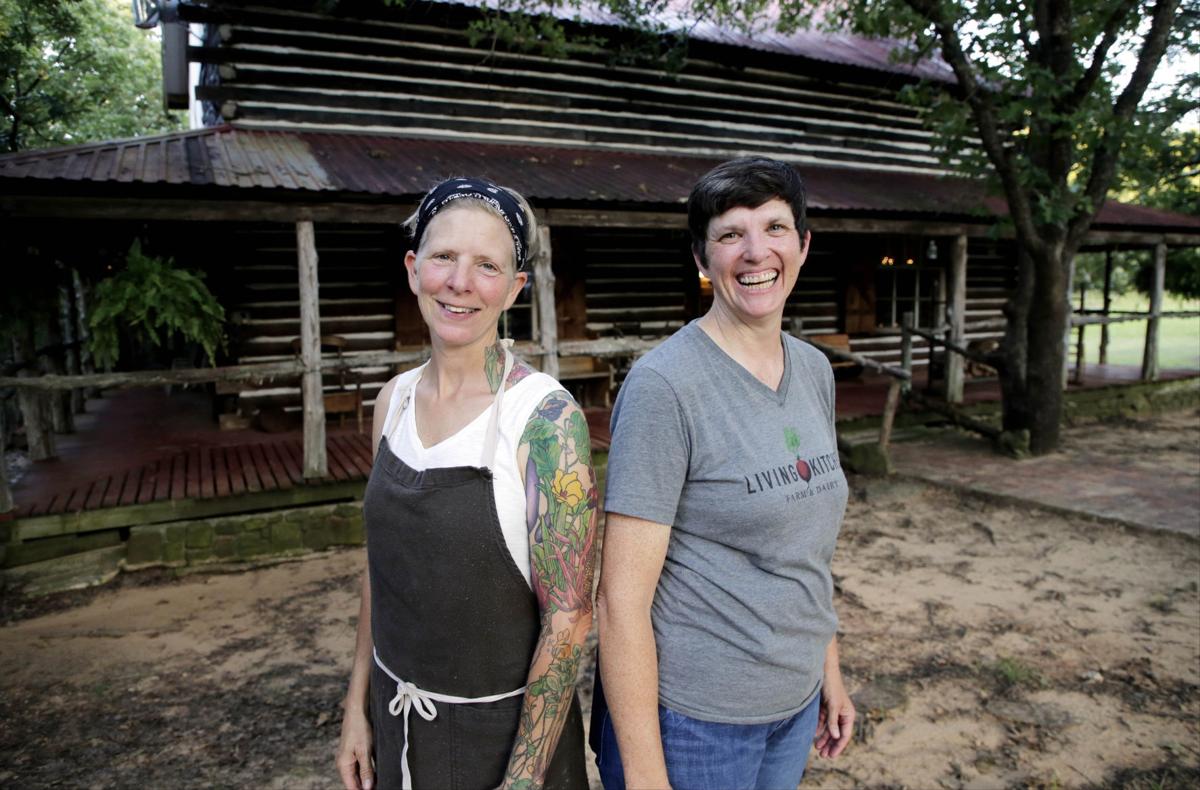 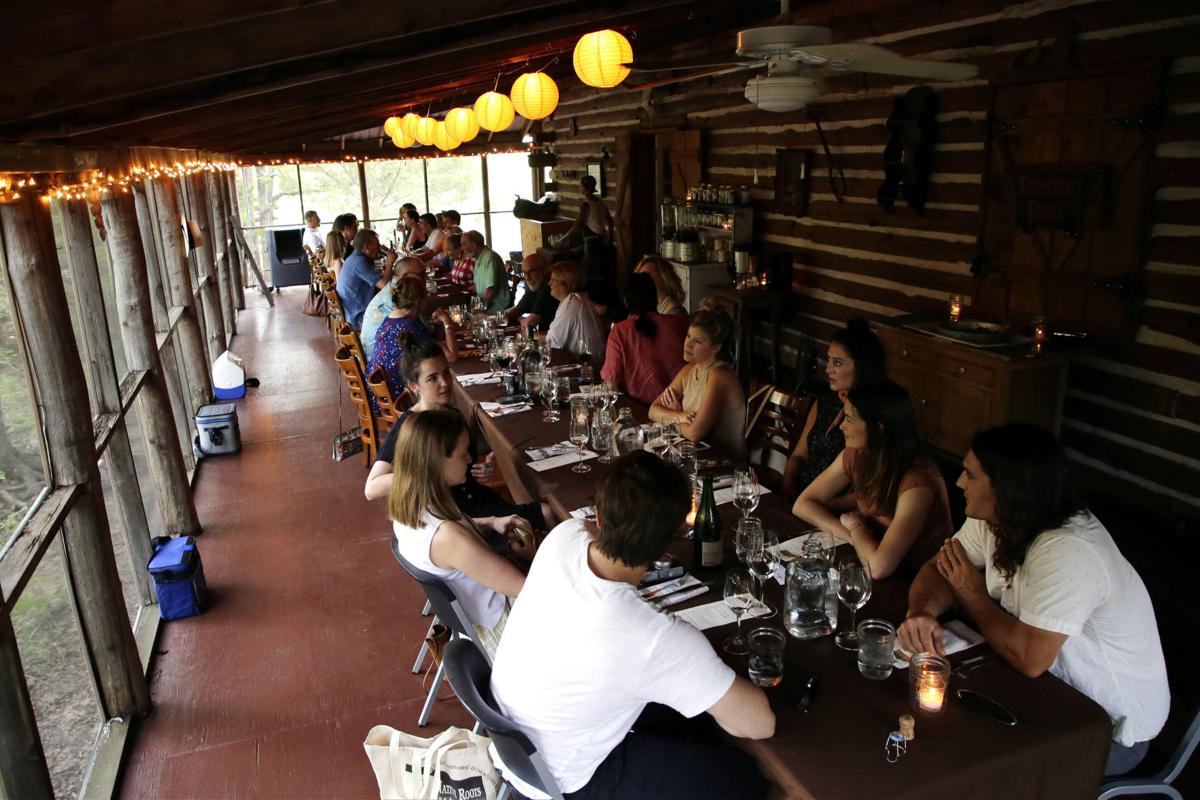 Attendees prepare to be served a recent dinner on the back porch of the log cabin at Living Kitchen Farm & Dairy near Depew. CORY YOUNG/Tulsa World 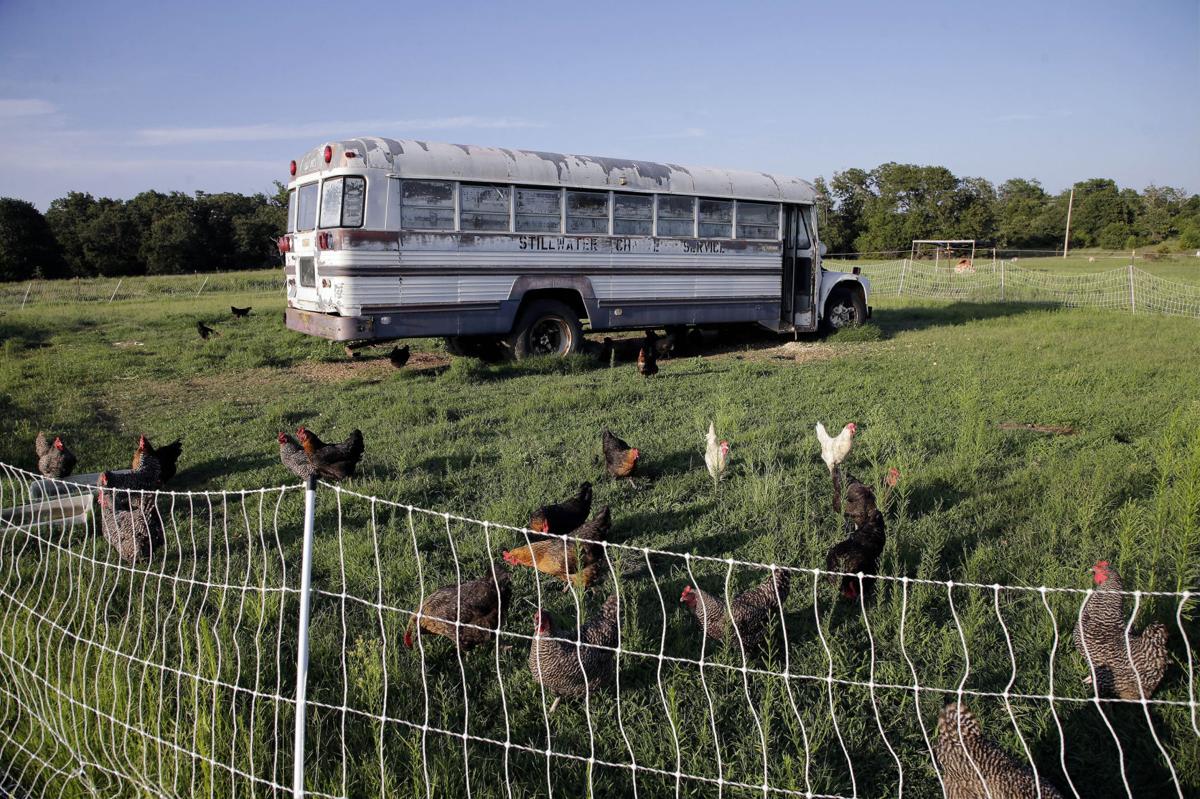 Hens walk around an old school bus at Living Kitchen Farm & Dairy near Depew prior to a recent dinner at the farm’s log cabin. CORY YOUNG/Tulsa World 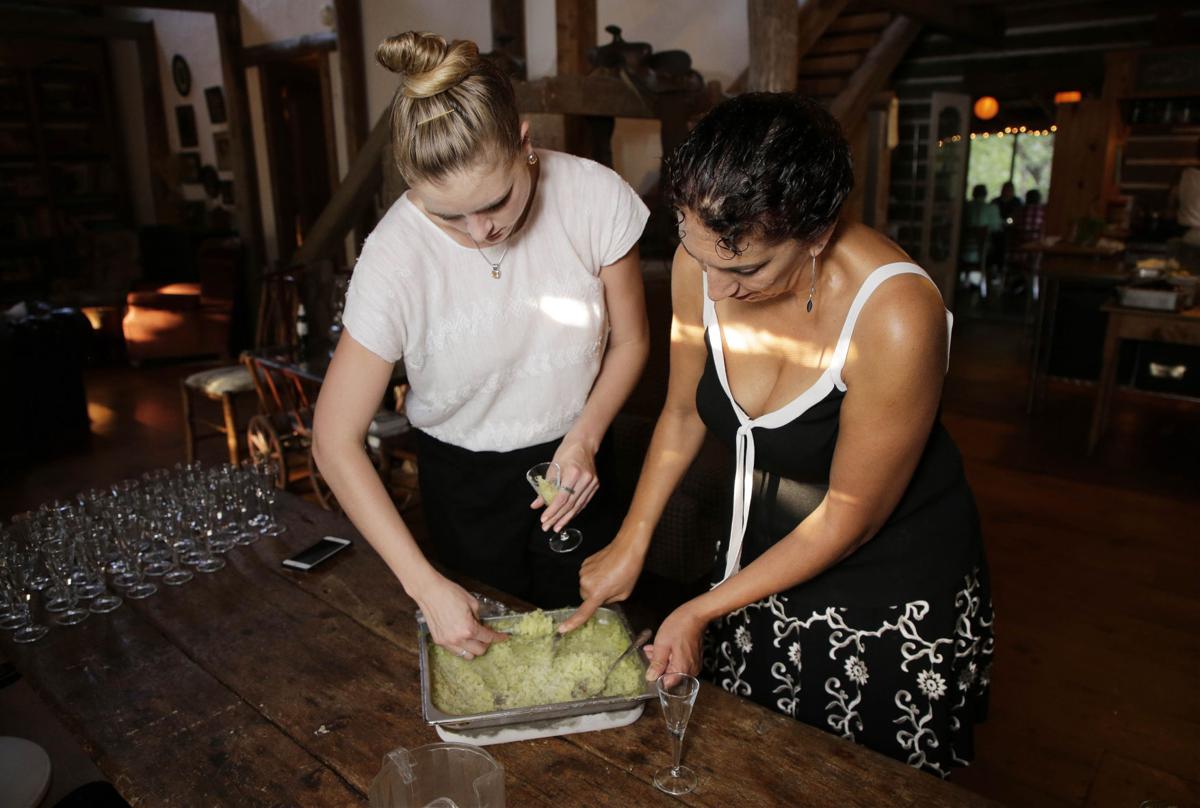 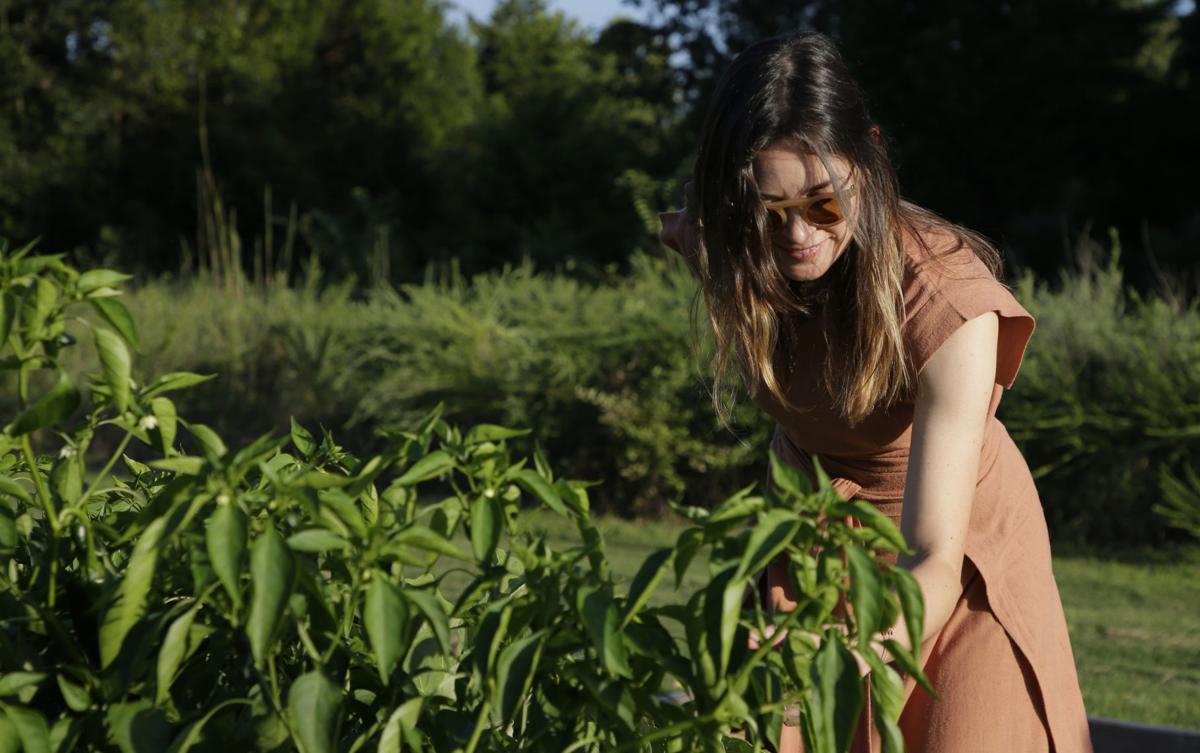 Darcy Sheppard of Culver City, California, looks over plants on a farm tour prior to a recent dinner at Living Kitchen Farm & Dairy. CORY YOUNG/Tulsa World

Heirloom tomato pie with a butter crust was among the nine courses at a dinner recently at Living Kitchen Farm & Dairy near Depew. CORY YOUNG/Tulsa World

Attendees prepare to be served a recent dinner on the back porch of the log cabin at Living Kitchen Farm & Dairy near Depew. CORY YOUNG/Tulsa World

Hens walk around an old school bus at Living Kitchen Farm & Dairy near Depew prior to a recent dinner at the farm’s log cabin. CORY YOUNG/Tulsa World

Darcy Sheppard of Culver City, California, looks over plants on a farm tour prior to a recent dinner at Living Kitchen Farm & Dairy. CORY YOUNG/Tulsa World

“It was a lavender dinner, and we had it as a fundraiser to buy goat feed,” Ford said. “We had to support our goat habit. It just went on from there.”

Ford was addressing a group of 31 diners recently on the screened-in back porch of a log cabin on their farm near Depew, about 50 minutes from Tulsa just off old Route 66.

Today, Ford and Becklund, a chef who came to Oklahoma 14 years ago from Seattle, stage weekend dinners from April through December. Each is themed — “Humble Pie,” “Pecking, Grazing, Rooting,” “Heirloom Tomato,” etc. — and all cost $95 per person, plus tax. And they sell out faster than you can say “cornbread and buttermilk.”

Becklund said she had to dig a little, figuratively and literally, to figure out the roots of Oklahoma cuisine.

“I love chicken-fried steak and barbecue, but I wanted to go deeper than that,” she said. “I read the Angie Debo historical novels about what folks were doing when settling Oklahoma. It was fascinating.”

The nine-course dinner we attended recently was appropriately titled “Red Dirt Dinner.” It was fascinating, as well.

It started with a flute of Sungold tomato elixir, a palate-opener featuring juice from the tart-sweet cherry tomato with a touch of jalapeno and sea salt, followed by “beans and taters” with fresh green beans, purple potatoes and bits of pork over a pool of house-made cultured butter.

I’ve never been a big admirer of buttermilk, but there was a lot to like about the next course — cornbread and buttermilk. The warm, melt-in-your-mouth square of cornbread sat in a small bowl of cool, house-made buttermilk, and the flavors helped me understand why my grandmother was so fond of this pairing. The buttermilk was a little sour up front and sweet on the finish.

The next two dishes delivered some of the most complex flavors.

A goat cheese-stuffed small poblano pepper with tomatilla salsa and smoked tomato sauce was served over a corn cake just off the griddle. The cake was seasoned with salt and a little tart, lemony sumac. Then came an heirloom tomato pie that included a slice of tomato on a thick butter crust, served over charred onion puree.

After a cabbage and kale salad with assorted cherry tomatoes in a bacon vinaigrette, I was ready for a break, and we got it with a cool, clean cucumber-lime ice drink.

I didn’t think I could eat another bite until our servers showed up with smoked peach cobbler topped with Earl Gray goat milk ice cream. I left none of that behind.

Among items that figured into several of the dishes were products from Swan Dairy in Claremore.

Living Kitchen serves water and tea. Diners may bring their own wine or beer, and Riedel stemware is available for wine. Suggested pairings from Tulsa’s Ranch Acres Wine & Spirits are provided ahead of the dinner.

After Becklund and Ford gave the opening remarks, Carissa Pankey, who has been with Living Farm since the beginning, gave entertaining explanations of each dish before it was served.

In addition to Pankey, the remainder of the staff that night — Christian, Alyson and Skylar — all were courteous and helpful. Utensils were changed out before every course, a nice touch.

Those concerned about weather might want to choose what time of year to book a dinner. The porch is not air-conditioned. Fans kept things cool enough for me, but they had to be turned off to be able to hear Pankey talk, and it got a bit warm during those interludes. We were told heaters are employed in colder months.

The two-story log cabin, used exclusively for the dinners, has a quaint, rustic feel and is decorated with antiques, saddles, farm implements, antique pie safes and cupboards.

Paper lanterns were strung above the long communal tables, and white twinkle lights circled the ceiling. The porch sits on the edge of a forest of trees.

Dinners start at 7 p.m. Diners have the option of arriving 30 minutes early to take a tour of the gardens.

Schedules are released usually three months at a time. The November-December schedule should be out soon, and reservations will be taken on the Living Kitchen website beginning Sept. 9, Becklund said.

If a dinner you want is sold out, Ford said getting on the waiting list is a “golden opportunity” to still make the dinner. Living Kitchen also sells season tickets.

“Season ticket holders get a small discount and five dinners of their choice,” Ford said.

Those who want to meet the Living Kitchen folks can do so Saturday mornings at the Cherry Street Farmers Market, where they have been regulars for years.

Dinner schedule at livingkitchenfarmanddairy.com; all dinners $95 per person, plus tax; payment through PayPal invoice.